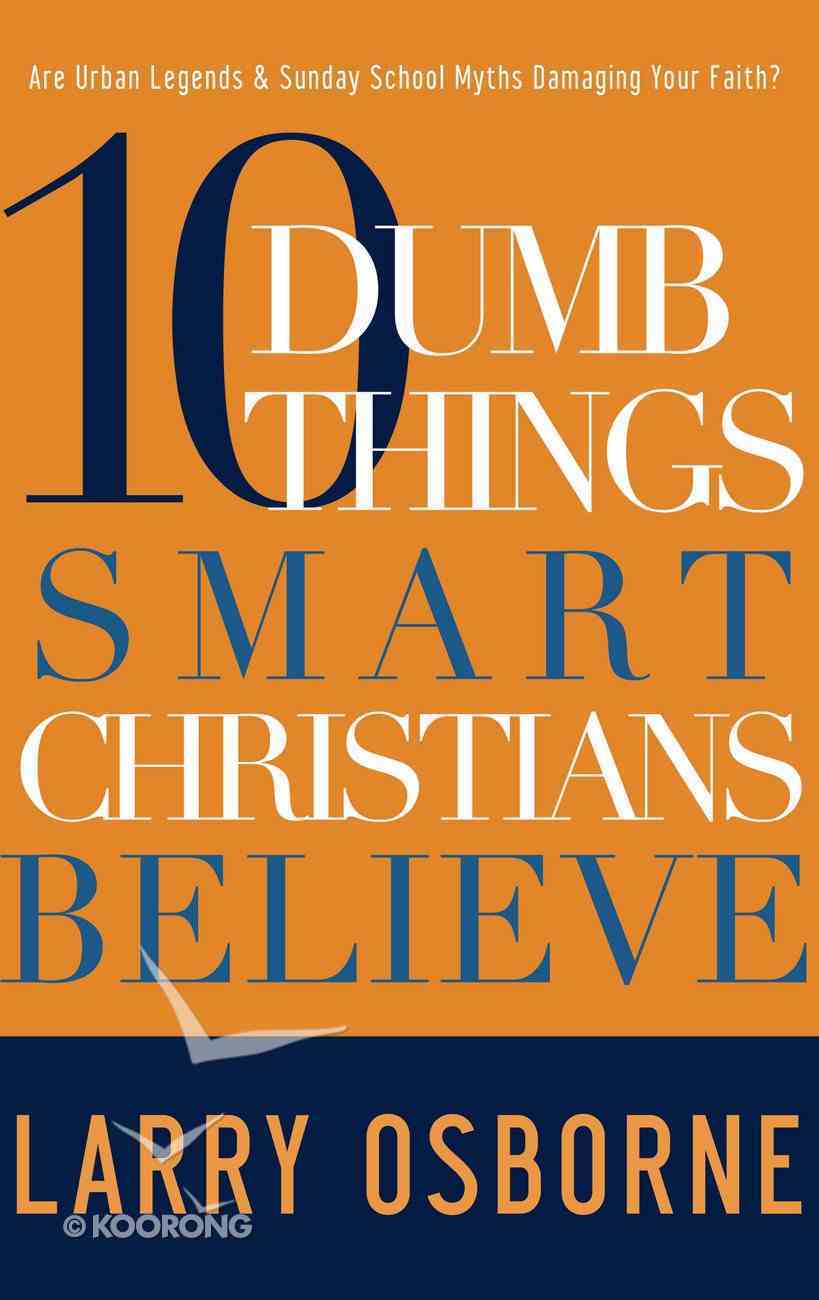 People don't set out to build their faith upon myths and spiritual urban legends. But somehow such falsehoods keep showing up in the way that many Christians think about life and God. These goofy ideas and beliefs are assumed by...

Spirituality For the Rest of Us
Larry Osborne
eBook

Jesus Loves Me: Christian Essentials For the Head and the Heart
John S Dickerson
Paperback

People don't set out to build their faith upon myths and spiritual urban legends. But somehow such falsehoods keep showing up in the way that many Christians think about life and God. These goofy ideas and beliefs are assumed by millions to be rock-solid truth . . . until life proves they're not. The sad result is often a spiritual disaster-confusion, feelings of betrayal, a distrust of Scripture, loss of faith, anger toward both the church and God. ^But it doesn't have to be so. In this delightfully personal and practical book, respected Bible teacher Larry Osborne confronts ten widely held beliefs that are both dumb "and" dangerous. Beliefs like these: ^- Faith can fix anything^- God brings good luck^- Forgiving means forgetting^- Everything happens for a reason^- A godly home guarantees good kids ^...and more. ^Get ready to be shocked, relieved, and inspired in the pages of "Ten Dumb Things Smart Christians Believe," Because the truth is meant to set us free
-Publisher

Larry Osborne (DMin.,Talbot Theological Seminary) is a teaching pastor at North Coast Church in northern San Diego County. North Coast is widely recognized as one of the most influential and innovative churches in America. Osborne speaks extensively on the subjects of leadership and spiritual formation. He and his wife, Nancy, live in Oceanside, California.


What possessed amilitary genius likeNapoleon to think that the harsh Russian winter would be no match for his troops? Sure, they were well trained and well equipped, but it’s not as if he had a shred of historical evidence to support his decision to march on.


What caused the leading scientists and thinkers of Galileo’s day to ignore evidence they could see with their own eyes and brand him as a heretic and a quack?


And why would an otherwise brilliant leadership team at IBM bet the farm on main frames and practically give away the PC, as well as the underlying operating system, to a young programmer named Bill Gates?


All of these, andmany other equally baffling decisions, were made by people far smarter than you or me. Yet, in hindsight, they all look like idiots.

In each case, an otherwise intelligent person badly misinterpreted the facts, made an incorrect assumption, or relied upon information that we now know to be completely false—with disastrous consequences. Sometimes they were confused by cultural bias (which at times can be so strong that it literally blinds us to the truth). In other cases, their underlying assumptions were so widely believed and accepted that no one thought to question them. Sometimes they were done in by a bad case of wishful thinking. But whatever the cause, they weren’t alone. History is filled with examples of otherwise intelligent people who acted upon amazingly goofy assumptions—and paid a high price for doing so.


The High Price of Flawed Assumptions

We, as Christians, aren’t immune. Even a highly moral, deeply sincere, smart Christian, with the best theological pedigree, has no guarantee of protection from the consequences of a bad decision based on flawed assumptions. I like to put it this way: the wisdom of Solomon + inaccurate facts or faulty assumptions= a fool’s decision


And therein lies the reason for this book.


Over the years, I’ve counseled and worked with many people who have made life-altering decisions based on what they perceived to be biblical principles, only to discover too late that what they thought was biblical didn’t come from the Bible at all.


Most of the time, they were victims of a spiritual urban legend.


A spiritual urban legend is just like a secular urban legend. It’s a belief, story, assumption, or truism that gets passed around as fact. In most cases the source is a friend, a Sunday-school class, a Bible study, a devotional, a book, or even a sermon. Because they sound so plausible and come from a reputable source, spiritual urban legends are often accepted without question and then quickly passed on. Once widely disseminated, they tend to take on a life of their own. They become almost impossible to refute because “everyone” knows they’re true. Anyone who dares to question their veracity gets written off as spiritually dull, lacking in faith, or liberal.


Admittedly, the consequences of some spiritual misconceptions aren’t particularly devastating. For instance, if someone mistakenly believes that the Bible says that “God helps those who help themselves” or “a penny saved is a penny earned” or that Jesus was some sort of soft-skinned Western European guy with blue eyes who walked from town to town in an old bathrobe saying profound things in a wispy voice—kind of a mystical hippy on Dramamine— it will throw them off a degree or two, but it will hardly destroy their faith.


But far too often the consequences are spiritually devastating.


Think of the disillusionment that sets in when someone writes off God for failing to keep a promise that he never made. Or the despair that follows a step of faith that turns out to have been a leap onto thin ice.


That is why an exposé of the ten widely held but blatantly false spiritual urban legends that we’re about to explore is so important. They aren’t just harmless misunderstandings.They’re spiritually dangerous errors that will eventually bring heartache and disillusionment to all who trust in them.


My bet is that you’ve already seen through a few. Others you may have always questioned, but until now thought you were the only one who didn’t “buy it.” Some may rock your boat. But whatever the case, I encourage you to examine each one with an open mind and an open Bible.

There is an old carpenter’s adage: “Measure twice, cut once.” It’s based on the observation that once we’ve cut a board too short, no matter how many more times we cut it, it will still be too short. The same holds true for the spiritual principles upon which we base our life. Once we’ve made a decision or set a course of action, it’s usually too late to go back and start checking out the accuracy of our assumptions.


The Bereans of New Testament times offer an example worth following. Believers who lived in theMacedonian city of Berea, they went so far as to check out everything the apostle Paul taught them, examining the Scriptures to see if what he said was really true.


Now remember, Paul was an apostle, an author of Scripture, God’s spokesman. But rather than being offended, he praised them for their lack of gullibility and noble search for the truth. I encourage you to follow their example as we work through each of the ten spiritual urban legends to come. I think you’ll discover not only that they are false but also that each one flatly con- tradicts what the rest of the Bible teaches. In many cases, they even contradict what their so-called supporting verses, or “proof texts,” actually say.


And, yes, I know that words like dumb and stupid are strong words. Whenever I use them when speaking to a larger group, I predictably get a couple of notes or even a face-to-face rebuke.Usually it’s a mom trying to eradicate the words from her children’s vocabulary. She wonders why I can’t use kinder, gentler terms that would be more acceptable in play group.


But I can’t. As noted above, these beliefs aren’t just false. They aren’t just unfortunate.They’re no tmerely a few degrees off. They are dangerous.They are what the Bible calls “foolish,” which in modern day terms means “stupid” and “dumb.”2

Yet I want to make it clear that nothing in these pages is meant as an attack on the people who believe these things.They themselves aren’t dumb.Their assumptions and beliefs are. If I’d had more room in the title, I would have called this book Ten Dumb Things That Smart, Sincere, Good, and Godly Christians Believe.


Each one of these spiritual urban legends is a bit like fool’s gold. It looks great at first glance, but once tested, it proves worthless. No doubt we’ve all jumped to some pretty foolish conclusions in our life. I know I have. But fortunately, early in my faith journey, I had some careful-thinking mentors who pointed out the folly of basing my belief system on what everybody else said rather than on careful biblical scrutiny. They taught me to avoid reading just my favorite verses.


They showed me the importance of reading all the surrounding verses—and the rest of the book as well.


Their advice has served me well and saved me much heartache.


It has also solidified my confidence in the Bible.The more I’ve learned to toss aside the clichés, happy talk, and cultural assumptions that don’t fit what the Bible actually says (or the way that life really works), the greater my trust in it as God’s Word and the ultimate source of spiritual truth.


It’s my hope that the pages of this book will do the same for you—that they will help you question everything you hear and test everything you believe against the actual words and teaching of the Bible.