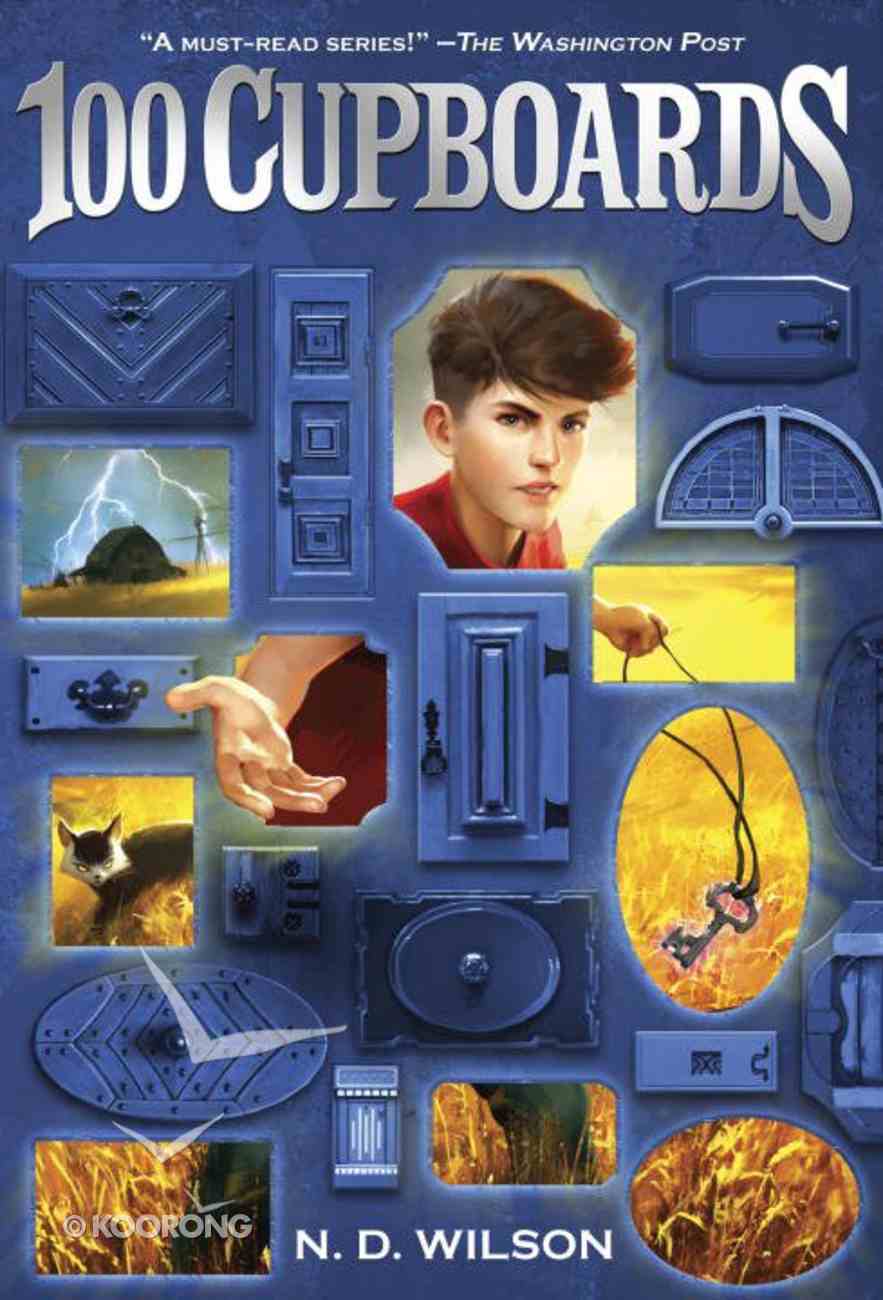 Twelve-year-old Henry York wakes up one night to find bits of plaster in his hair. Two knobs have broken through the wall above his bed and one of them is slowly turning . . .Henry scrapes the plaster off the...

Twelve-year-old Henry York wakes up one night to find bits of plaster in his hair. Two knobs have broken through the wall above his bed and one of them is slowly turning . . .Henry scrapes the plaster off the wall and discovers cupboards of all different sizes and shapes. Through one he can hear the sound of falling rain. Through another he sees a glowing room&#8211;with a man pacing back and forth! Henry soon understands that these are not just cupboards, but portals to other worlds.

100 Cupboards is the first book of a new fantasy adventure, written in the best world-hopping tradition and reinvented in N. D. Wilson&#8217;s inimitable style.

Henry, Kansas, is a hot town. And a cold town. It is a town so still there are times when you can hear a fly trying to get through the window of the locked-up antique store on Main Street. Nobody remembers who owns the antique store, but if you press your face against the glass, like the fly, you'll see that whoever they are, they don't have much beyond a wide variety of wagon wheels. Yes, Henry is a still town. But there have been tornadoes on Main Street. If the wind blows, it's like it won't ever stop. Once it's stopped, there seems to be no hope of getting it started again.
There is a bus station in Henry, but it isn't on Main Street. It's one block north--the town fathers hadn't wanted all the additional traffic. The station lost one- third of its roof to a tornado fifteen years ago. In the same summer, a bottle rocket brought the gift of fire to its restrooms. The damage has never been repaired, but the town council makes sure that the building is painted fresh every other year, and always the color of a swimming pool. There is never graffiti. Vandals would have to drive more than twenty miles to buy the spray paint.

Every once in a long while, a bus creeps into town and eases to a stop beside the mostly roofed, bright aqua station with the charred bathrooms. Henry is always glad to see a bus. Such treats are rare.

On this day, the day our story begins, bus hopes were high. The Willis family was expecting their nephew, and the mister and missus stood on the curb waiting for his arrival.

Mrs. Willis couldn't hold nearly as still as the town. She was brimful of nervous energy and busily stepped on and off the curb as if she were waiting for the bus to take her off to another lifetime of grammar school and jump rope. She had planned to wear her best dress on principle--it was the sort of thing her mother would have done--but she had no idea which of her dresses was best, or how to begin the selection process. It was even possible that she didn't have a dress that was best.
So she had remained in her sweatpants and T-shirt. She had been canning in her kitchen and looked pleasant despite the faded teal of her pants. Her face was steam-ruddied and happy, and her brown hair, which had originally been pulled back into a ponytail, had struggled free. On this day, if you got close enough, as her nephew would when hugged, she smelled very strongly of peaches. She was of medium build in every direction, and she was called Dotty by her friends, Dots by her husband, and Mrs. Willis by everyone else.

People liked Dotty. They said she was interesting. They rarely did the same for her husband. They said Mr. Willis was thin, and they didn't just mean physically thin. They meant thin everywhere and every way. Dotty saw much more than thin, and she liked him. Frank Willis didn't seem to notice much of anything beyond that.
Mrs. Willis stopped her stepping and backed away from the curb. Something was shimmering on the highway. The bus was coming. She nudged Frank and pointed. He didn't seem to notice.

The Henry on the bus was not a town in Kansas. He was simply a twelve-year-old boy on a slow bus from Boston, waiting to meet an aunt and uncle he had not seen since the age of four. He was not looking forward to reuniting with Aunt Dotty and Uncle Frank. Not because he in any way disliked them, but because he had led a life that had taught him not to look forward to anything.

The bus stopped amid a shower of metallic grunts. Henry walked to the front, said goodbye to a talkative old woman, and stepped onto the curb into a lung-taste of diesel. The bus lurched off, the taste faded, and he found that he was being held tight by someone rather soft, though not large, and the smell of diesel had been replaced by peaches. His aunt held him back by the shoulders, her smile faded, and she became suddenly serious.

&quot;We are both so sorry about your parents,&quot; she said. She was diligently eye-wrestling him. Henry couldn't quite look away. &quot;But we are very happy you're going to be staying with us. Your cousins are all excited.&quot;

Someone patted Henry on the shoulder. He looked up.

&quot;Yep,&quot; Uncle Frank said. He was watching the bus march out the other end of town.

&quot;The truck's over here,&quot; he added, and gestured with his head.

Uncle Frank carried Henry's duffel bag while Aunt Dotty escorted him to the truck, one arm tightly wrapped around his shoulder. It was an old truck. A few decades earlier, it may have been a Ford. Then it had been donated as a shop-class project to Henry High. Uncle Frank bought it at an end-of-the-year fundraiser. The paint was scum brown, the sort that normally hides at the bottom of a pond, attractive only to leeches and easily pleased frogs. The class had not been able to afford the bigger wheels they had dreamed of, so they had simply lifted the truck body as high as the instructor would allow. The overall effect was one of startling ricketiness. Henry's bag was thrown into the truck bed.

&quot;Hop in,&quot; Uncle Frank said, and pointed in the back. &quot;The tailgate doesn't drop, so just stand on the tire there and hoick yourself over. I'll boost you a bit.&quot;

Henry stood on the tire and teetered for a moment, trying to get one leg over the edge of the truck bed. Uncle Frank pushed him from behind, and he tumbled in onto his side.