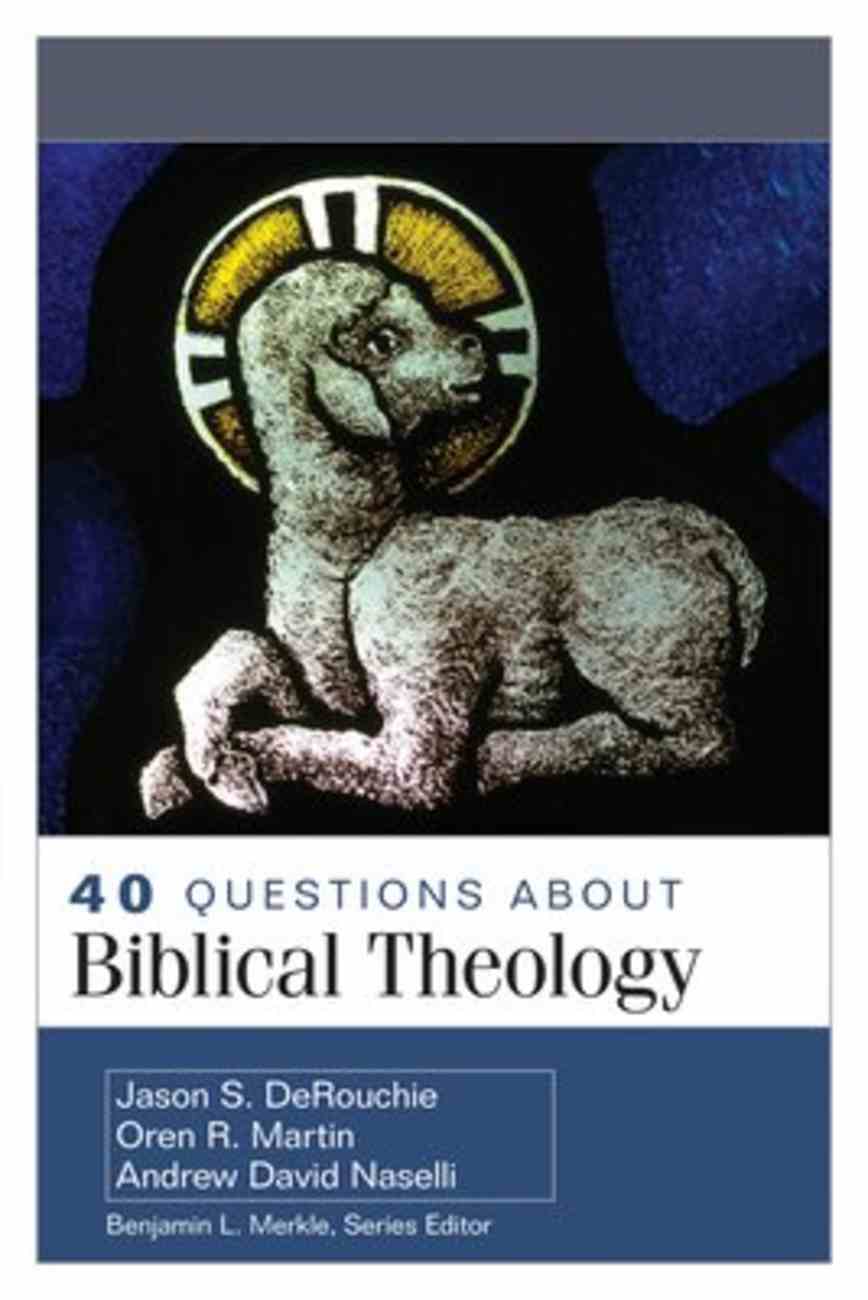 :An accessible survey of the meaning, methodologies, themes, and applications of biblical theology To understand what the entire Bible teaches about any given subject, we must practice biblical theology. By surveying the whole canon of Scripture, we can...

:An accessible survey of the meaning, methodologies, themes, and applications of biblical theology

To understand what the entire Bible teaches about any given subject, we must practice biblical theology. By surveying the whole canon of Scripture, we can best discern what God has revealed about any particular issue. But doing so requires answering a number of important questions:
. What type of biblical theology will we choose?
. What overall story does the Bible tell?
. How should we understand the relationship between the Old and New Testaments?
. How does our topic fit within salvation history?
. How do we apply the truths we discover?

40 Questions About Biblical Theology provides resources to answer these key questions in order to guide readers in their own study and practice of biblical theology. Other vital topics the authors address include how to understand typology, key themes in biblical theology, and how Christians should relate to Old Testament promises.

Ideal for courses on biblical theology, for pastors, and for anyone who teaches or interprets Scripture, 40 Questions on Biblical Theology will deepen your understanding and application of the whole counsel of God.
-Publisher

Jason S. DeRouchie (Ph.D., The Southern Baptist Theological Seminary) is Associate Professor of Old Testament at Bethlehem College & Seminary in Minneapolis, MN. Previously, he served as an Associate Pastor, taught courses at Gordon-Conwell Theological Seminary and Gordon College, and served as Assistant Professor of Old Testament and Hebrew at Northwestern College (MN).
He has published a number of articles on Hebrew language and literature, has authored a volume on Old Testament discourse analysis titled A Call to Covenant Love: Text Grammar and Literary Structure in Deuteronomy 5–11 (Gorgias, 2007), serves on the editorial board for Zondervans new Hearing the Message of Scripture OT commentary series, is writing the volume on Deuteronomy in this series, and stands as the contributing editor for Kregels forthcoming Old Testament thematic survey titled What the Old Testament Authors Really Cared About. DeRouchie teaches adult Sunday school at Bethlehem Baptist Church, where he and his wife Teresa have been members since 2007. The DeRouchies live in Coon Rapids, MN, and have three children, Janie, Ruthie, and Isaac.

Oren Martin (PhD, The Southern Baptist Theological Seminary) is assistant professor of Christian theology at Boyce College at Southern Seminary. Previously, Martin served as professor of theology at Northland International University. Additionally, he has served as a minister and on staff for the Council of Biblical Manhood and Womanhood. Martin has written articles and book reviews for various publications including the Journal of Evangelical Theological Society, Trinity Journal, the Journal for Biblical Manhood and Womanhood and the Gospel Coalition. He is a member of the Evangelical Theological Society.

Andrew David Naselli is an associate professor of New Testament and theology at Bethlehem College and Seminary in Minneapolis and a pastor of Bethlehem Baptist Church. Find his blog at AndyNaselli.com.