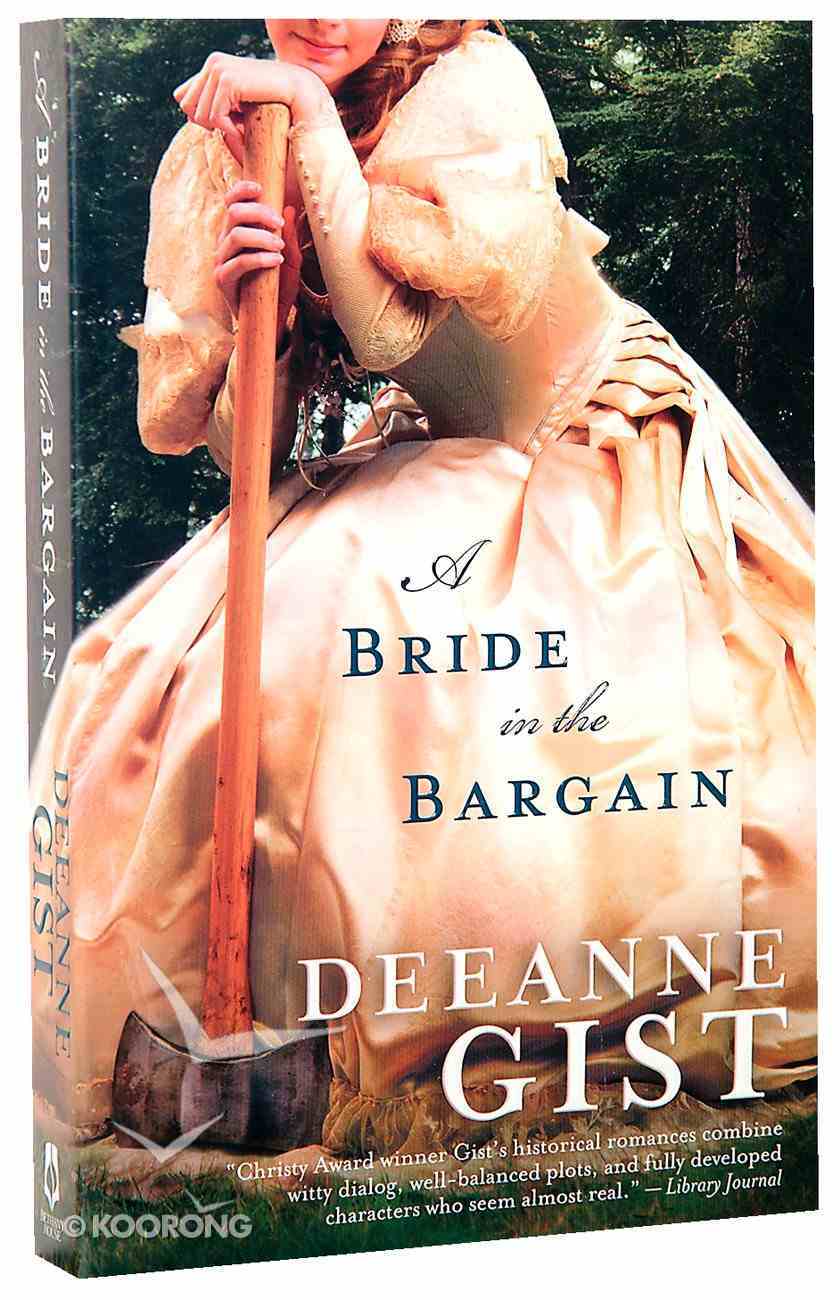 A Bride in the Bargain

In 1860s Seattle, a man with a wife could secure himself 640 acres of timberland. But because of his wife's untimely death, Joe Denton finds himself about to lose half of his claim. Still in mourning, his best solution is...

A Bride in the Bargain
Deeanne Gist
eBook

The Measure of a Lady
Deeanne Gist
eBook

Deep in the Heart of Trouble
Deeanne Gist
eBook

It Happened At the Fair
Deeanne Gist
eBook

In 1860s Seattle, a man with a wife could secure himself 640 acres of timberland. But because of his wife's untimely death, Joe Denton finds himself about to lose half of his claim. Still in mourning, his best solution is to buy one of those Mercer girls arriving from the East. A woman he'll marry in name but keep around mostly as a cook. Anna Ivey's journey west with Asa Mercer's girls is an escape from the griefs of her past. She's not supposed to be a bride, though, just a cook for the girls. But when they land, she's handed to Joe Denton and the two find themselves in a knotty situation. She refuses to wed him and he's about to lose his land. With only a few months left, can Joe convince this provoking--but beguiling--easterner to be his bride?

From A Bride in the BargainMr. Asa Mercer placed his pen back in its holder and looked at Anna. "A cook, you say?""Yes. I prepared the menu and all courses for the morning, noon, and evening meals, having only Sundays off."Mercer leaned back in his chair. "Well. We aren't taking any passengers on credit, but there is one man who wanted a br--, err, a woman who could feed the men who work for him."She straightened. "Well, I daresay he'd be very pleased with me."Mercer gave her a quick appraisal. "I daresay he would.""How many men does he employ?""He's a lumberjack. I'm not sure how many men are involved in his operation. No more than a dozen, I'd say, if that."A lumberjack. The word conjured up visions of pine forests, fresh air and wilderness--something far removed from the bustling city, the aftermath of the war."Goodness," she said, a flicker of anticipation whisking through her. "I could feed a dozen men with one hand tied behind my back."He rubbed his hands against his legs. "Well, he was very specific that he would pay for the fare. You would then have to work off your debt for him.""I'm agreeable to those terms, if he is."Mercer said nothing. She could see his inner struggle. Was he worried she wouldn't measure up to her new employer?Sitting a little straighter, she forced herself to not squirm.Finally, he turned again to his desk and retrieved his pen. "Very well, Miss Ivey. I will draw up your papers and award you passage to the Washington Territory on the S.S. Continental."
-Publisher

Deeanne Gist, the bestselling author of A Bride Most Begrudging and The Measure of a Lady, has a background in education and journalism. Her credits include People magazine, Parents, and Parenting. With a line of parenting products called "I Did It! Productions" and a degree from Texas A and M, she continues her writing and speaking. She and her family live in Houston, Texas. Visit Deeanne's Web site at www.deeannegist.com