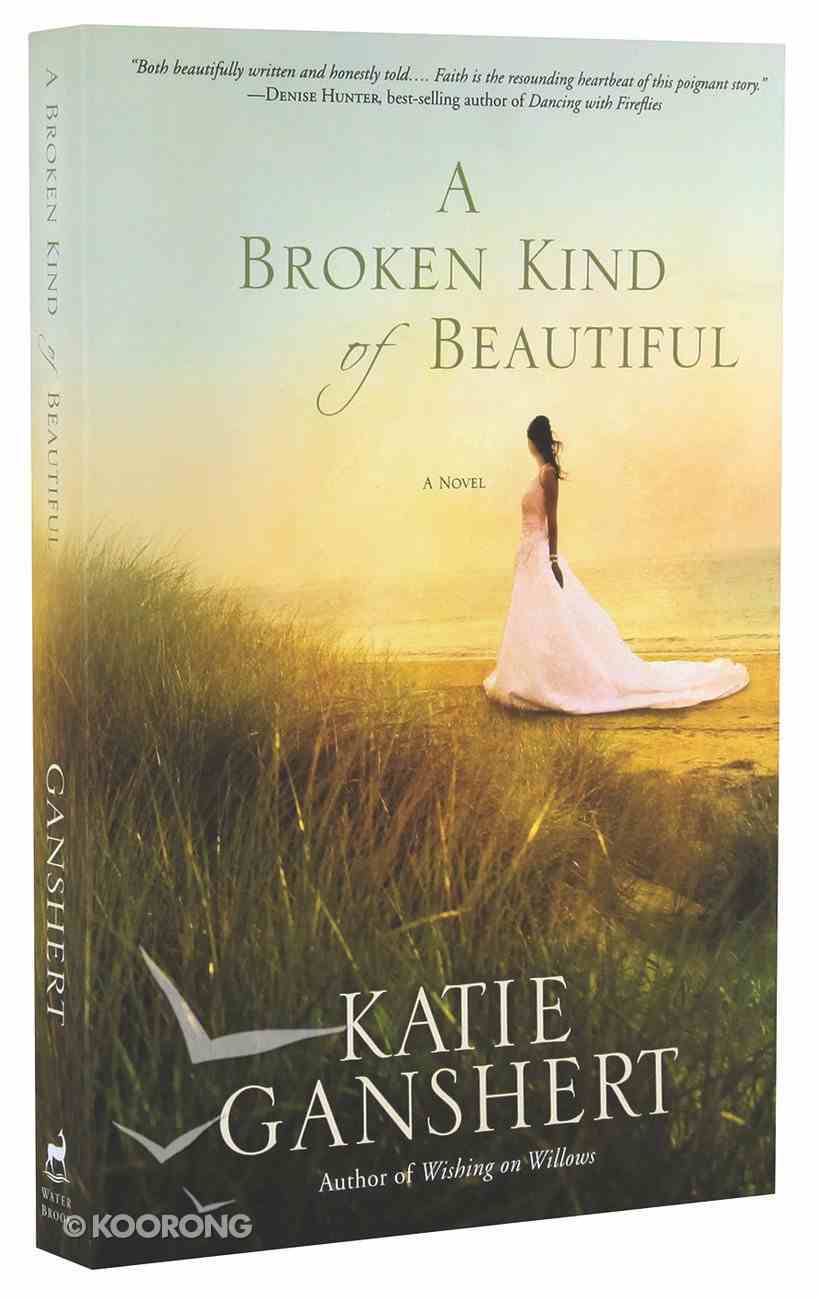 A Broken Kind of Beautiful

When life starts to unravel for 24 year-old model Ivy Clark, she'll do anything to hold on to the facade of beauty she has constructed. Moving to a quaint island town to model bridal wear, Ivy meets photographer David Knight,...

The Art of Losing Yourself
Katie Ganshert
eBook

No One Ever Asked
Katie Ganshert
eBook

When life starts to unravel for 24 year-old model Ivy Clark, she'll do anything to hold on to the facade of beauty she has constructed. Moving to a quaint island town to model bridal wear, Ivy meets photographer David Knight, whose God-focused way of life challenges her ideas about beauty and worth.

Sometimes everything you ever learned about yourself is wrong

Fashion is a fickle industry, a frightening fact for twenty-four year old model Ivy Clark. Ten years in and she's learned a sacred truth--appearance is everything. Nobody cares about her broken past as long as she looks beautiful for the camera. This is the only life Ivy knows--so when it starts to unravel, she'll do anything to hold on. Even if that means moving to the quaint island town of Greenbrier, South Carolina, to be the new face of her stepmother's bridal wear line--an irony too rich for words, since Ivy is far from the pure bride in white.

If only her tenuous future didn't rest in the hands of Davis Knight, her mysterious new photographer. Not only did he walk away from the kind of success Ivy longs for to work maintenance at a local church, he treats her differently than any man ever has. Somehow, Davis sees through the façade she works so hard to maintain. He, along with a cast of other characters, challenges everything Ivy has come to believe about beauty and worth. Is it possible that God sees her--a woman stained and broken by the world--yet wants her still?
-Publisher

:The girl with the haunted eyes reentered his life on the other side of a lowering casket, humidity and the shrill song of cicadas tangling together in the South Carolina heat. Aunt Marilyn pressed trembling fingers against her lips and swayed as if the wet ground had risen up and pitched her forward. Davis Knight tightened his grip beneath his aunt&rsquo;s elbow and looked away from her pain. That&rsquo;s when he saw her&mdash;standing like a statue, her waif-like form shrouded in grief.

Ivy Clark. All grown up.

A distant rumble of thunder rolled across the blackened sky, leftover remnants from a tropical storm. A raindrop brushed his ear; another grazed the tip of his nose. Pastor Voss bowed his head. So did everyone else, including Ivy. A slight breeze ruffled wisps of hair around her downturned face and fluttered the butterfly sleeves of her dress. The last time he&rsquo;d seen her in the flesh, he had just returned to Greenbrier for a short summer stint after completing his freshman year at NYU. Ivy had been twelve going on fifty. Tall and gangly with eyes too large for her face&mdash;twin souls the color of honey, staring and deep as if she saw and understood every sadness in the world.

Then she had disappeared, and so did he, in a way. A few years later he began following her career because it was in his interest to follow it, but even with all professional motives stripped bare, he would have followed it anyway.

Pinpricks of sweat beaded along Davis&rsquo;s temples. His sister, Sara, wrapped her arm around his and squeezed. Pastor Voss&rsquo;s prayer ended in time for Ivy Clark to look up and catch him staring. Familiar territory to her, no doubt, given her career. Not so familiar to him.

He would have looked away, but her awareness of his attention triggered an intriguing metamorphosis. It seemed her eyes had learned some tricks over the years. Like how to bat in just the right way. How to dance in invitation. How to swallow the grief that had wrapped around her shoulders moments ago, when she thought nobody watched. She smiled a smile Davis knew well, one he&rsquo;d seen hundreds of times on a hundred beautiful faces&mdash;the type of smile that had lost its allure two years ago.

He glanced down at the grass&mdash;thick green blades framing his black loafers&mdash;and patted his sister&rsquo;s hand, his own personal reminder of why a woman like Ivy Clark could not be a part of his life. Ivy belonged to a world that took and took and took so subtly and connivingly that a person didn&rsquo;t notice until there was nothing left to give. It was a world he never wanted to be a part of again.

Still, he looked one more time. Ivy stared back, a smirk on her face.

&ldquo;Now&rsquo;s not the time to talk about this, Ivy.&rdquo; Bruce strode through the long grass toward a line of cars parked along the brick path, texting a message into his phone.

The drops of rain turned into a mist that settled over Ivy&rsquo;s arms, cooling her skin. If only the drizzle could quench her fear. Who was he texting? She lengthened her stride, trailing him like a long evening shadow. &ldquo;You&rsquo;re the one doing business.&rdquo;

&ldquo;How do you know it&rsquo;s business?&rdquo; He dug into his pocket, pulled out his keys, and clicked the button on the remote to unlock the car doors. Two short beeps interrupted a chorus of chirping birds hiding somewhere in the Spanish moss that dripped from gnarled tree limbs overhead.

Ivy rolled her eyes. Only Bruce would lock his car inside a cemetery in Greenbrier, South Carolina. &ldquo;This isn&rsquo;t New York City.&rdquo; The two places existed on opposite poles. &ldquo;I don&rsquo;t think any burglars are prowling around waiting to break into your car.&rdquo;

He stopped in front of the black Lexus with rental plates.

She stopped too. &ldquo;I need to know, Bruce. It&rsquo;s my future we&rsquo;re talking about here.&rdquo;

&ldquo;If you were so concerned, you should have kept your mouth shut.&rdquo;

&ldquo;I made one lousy suggestion. You&rsquo;re telling me O&rsquo;Banion&rsquo;s getting bent out of shape because of one small&mdash;&rdquo;

&ldquo;It&rsquo;s not your job to make suggestions, especially not to a photographer like Miles O&rsquo;Banion.&rdquo;

Ivy&rsquo;s stomach knotted. What would happen if that one slip cost her two years of security? Her twenty-fifth birthday crept closer each day. As hard as she tried, she wasn&rsquo;t getting any younger and people were starting to notice. If she wanted to continue modeling, she needed that contract. Bruce ran his hand down his face. &ldquo;It&rsquo;s your job to keep your mouth closed and work for the camera. That&rsquo;s what you get paid for. Nobody cares about your opinions.&rdquo;

&ldquo;Then why didn&rsquo;t you listen?&rdquo;

A small group of women dressed in black stopped conversing. Bruce painted on a smile and gave them a polite wave. He leaned close to Ivy and spoke from the corner of his mouth, his smile unwavering. &ldquo;We&rsquo;re not talking about this here. Let&rsquo;s show a little respect.&rdquo;

Her muscles coiled. Respect? James didn&rsquo;t deserve her respect. She didn&rsquo;t care how touching the eulogy, how beautiful the flowers, or how crowded the funeral. Why should she care about losing a man who never wanted her in the first place? Why should his unspoken I love you echo in her mind? She refused to pretend her father&rsquo;s death had any bearing on her life. Because it didn&rsquo;t. She wouldn&rsquo;t let it. She gathered her mounting anger and stuffed it in the empty place inside her chest.

Bruce opened the passenger-side door. &ldquo;Get in the car.&rdquo;

She folded her arms. &ldquo;If you know something, as my agent, you have no right to keep it from me.&rdquo;

&ldquo;I don&rsquo;t know anything. And when I find out, we can discuss it back in New York.&rdquo;

&ldquo;Because Annalise feeds off gossip, or haven&rsquo;t you figured that out yet?&rdquo;

Despite the stagnant heat, a chill crept across Ivy&rsquo;s skin. As her friend, Annalise wouldn&rsquo;t have pulled this out of thin air. It had to have some substance. She gripped her elbows, as if the harder her fingers dug into flesh, the less any of this would matter. &ldquo;Gossip always starts with a seed of truth.&rdquo;

&ldquo;Look, either get in the car or I&rsquo;m leaving you here. Your choice.&rdquo;

Ivy looked over her shoulder at the rows of polished tombstones. Her throat tightened. She hugged her arms and stepped closer to the car. &ldquo;I want to go to the airport.&rdquo;

&ldquo;He was my brother and your father. We&rsquo;re not leaving now.&rdquo;

&ldquo;He was hardly my father.&rdquo; The emptiness expanded, carving her out like a pumpkin-turned-jack-o-lantern. She was nothing but a shell. A beautiful, empty shell.

An SUV pulled out from behind them. An engine rumbled in front. Except for a few stragglers in the distance lingering over her father&rsquo;s grave, the cemetery cleared.

Bruce drummed his fingers on the top of the car.

&ldquo;I&rsquo;m not going to sit in that house, eat cucumber sandwiches, and pretend to care that he&rsquo;s gone.&rdquo;

&ldquo;You don&rsquo;t have a choice.&rdquo; Bruce opened the door wider.

Her shoulders sagged. Ivy slid into the passenger side, pulled the seat belt across her body, snapped it into place, and stared straight ahead. Why had she said anything to O&rsquo;Banion? So what if he wanted to keep her in the same overdone pose? She shouldn&rsquo;t have said a word. If there was one mistake to avoid in her world, it was wounding the pride of a notoriously prideful photographer.

Bruce&rsquo;s door opened. He got inside and set his phone in the cup holder. As soon as he started the ignition, the phone vibrated, rattling loose change in the console. He swept up the device and held it against his ear. &ldquo;Bruce Olsen.&rdquo;

Nothing but the unintelligible chatter of a female voice from the other end.

A muscle pulsed in Bruce&rsquo;s jaw. He scratched his chin and looked out the window, hiding his expression. &ldquo;I&rsquo;ll be back tomorrow. Could we meet then and talk this over?&rdquo; He clicked his seat belt into place and nodded. Another long pause. More unintelligible chatter. A sigh from her uncle. &ldquo;I understand. Thanks for getting back to me.&rdquo;

He hit the End button and started the car.

Ivy pressed her fingers against her sweat-dampened palms.

Bruce pulled out onto the brick street and steered toward the iron gate. &ldquo;It seems Ms. Reynolds wants a fresh face for her cosmetic line.&rdquo; He flipped on the radio. Bon Jovi&rsquo;s &ldquo;You Give Love a Bad Name&rdquo; blasted Ivy&rsquo;s ears. &ldquo;Sorry, kid. They&rsquo;re not renewing your contract.&rdquo;