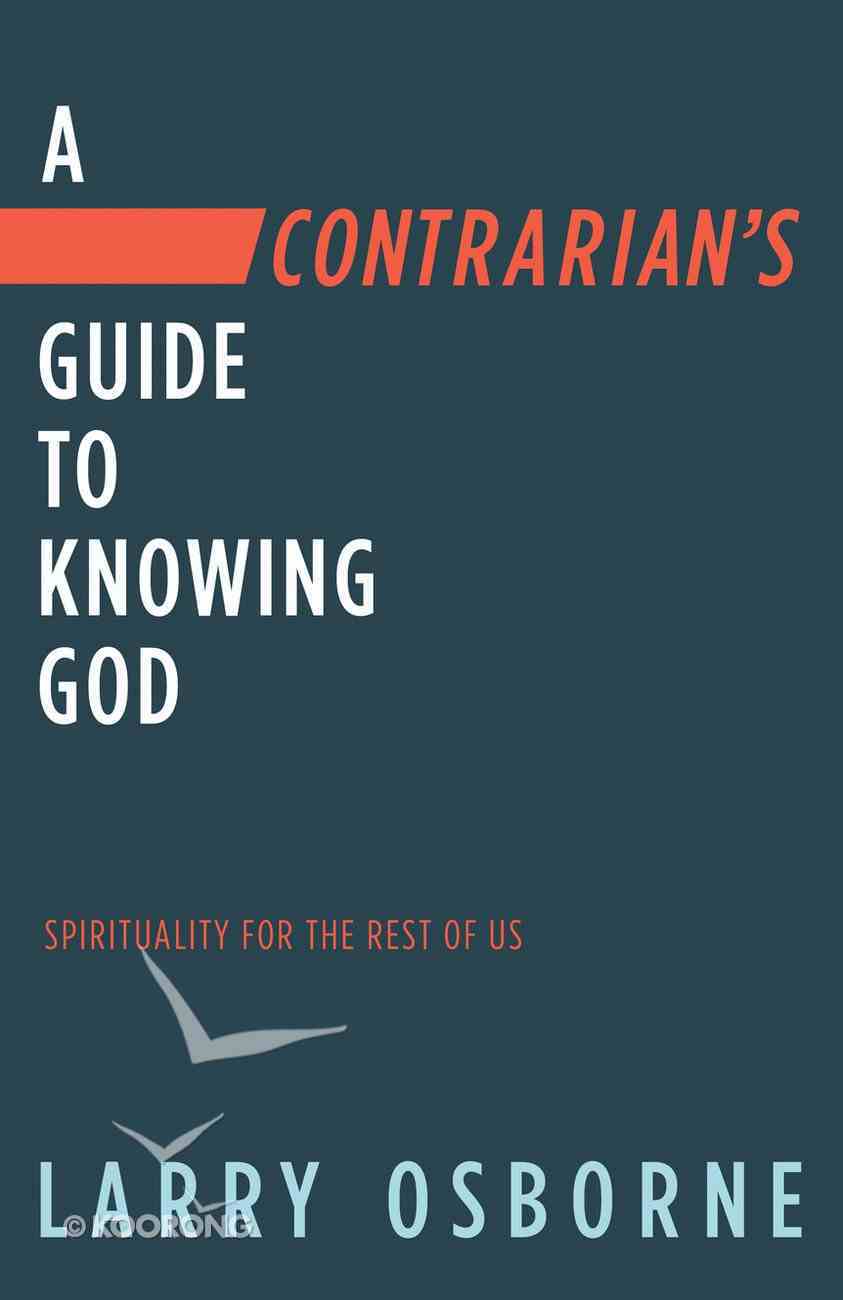 A Contrarian's Guide to Knowing God: Spirituality For the Rest of Us

:"Contrarian thinking at its best simply asks, Is this really true? It speaks up when the politically correct answer or the conventional wisdom doesn't match reality - when things simply don't work the way everyone says they should." -...

Spirituality For the Rest of Us
Larry Osborne
eBook

Revolutionary God: How Knowing Him Changes Everything
Joel Morris
Paperback

The Burden is Light: Liberating Your Life From the Tyranny of Performance and Success
Jon Tyson
Paperback

:"Contrarian thinking at its best simply asks, Is this really true? It speaks up when the politically correct answer or the conventional wisdom doesn't match reality - when things simply don't work the way everyone says they should."
- Larry Osborne

If you don't fit the mold...
If you're tired of adjusting to other people's definitions of spirituality...
If traditional spiritual disciplines just aren't working for you...
If all the standard answers aren't enough...
...but your deepest desire
is to know God more...
Here's Spirituality for the Rest of Us
-Publisher

Larry Osborne (DMin.,Talbot Theological Seminary) is a teaching pastor at North Coast Church in northern San Diego County. North Coast is widely recognized as one of the most influential and innovative churches in America. Osborne speaks extensively on the subjects of leadership and spiritual formation. He and his wife, Nancy, live in Oceanside, California.

:SPIRITUALITY FOR THE REST OF US
I &#8217;ve noticed that much (if not most) teaching on spirituality is a lot like books I&#8217;ve read on marriage.
My wife and I always thought we had a great one until we started reading books and going to the conferences designed to tell us how to have a great marriage. We viewed our relationship as characterized by oneness of spirit, soul, and mind&#8212;a connectedness that made two truly become one. But the books and conferences informed us that we were doing it all wrong. We weren&#8217;t eating enough meals together, the TV was on too much, our date nights were far too rare, and our prayer time as a couple was sorely lacking. The message was clear: The fact that we had a strong marriage didn&#8217;t matter; how we got there was what mattered most. And we&#8217;d apparently gotten there the wrong way.
Their tools for building a great marriage had somehow become the measure of a great marriage.
And on that scale, we didn&#8217;t measure up.


COOKIE-CUTTER CHRISTIANS
When it comes to having a great relationship with God, the same thing often happens. The tools and spiritual disciplines that can help us get there frequently become an end in themselves. Books and conferences on the inner life end up presenting a cookie-cutter approach to spirituality that focuses more on the steps we take than on the actual quality of our walk with God. The emphasis of this book is that God wants a great relationship with all of us, but it can&#8217;t be found in a one-size-fits-all approach.
It&#8217;s the end result that matters, not the path we take to get there. If something produces a great walk with God for you, it&#8217;s a great path to take. If not, it&#8217;s probably a waste of time, even if lots of other folks highly recommend it. Fact is, what works for one can be worthless&#8212;even harmful&#8212; for another. The way we&#8217;re wired really matters. Whenever we project what works for us onto everyone else, we create frustration and legalism. When we let others project their stuff onto us we too often end up with unfounded guilt or a nervous twitch. Neither of which is very helpful when it comes to producing a great relationship with God.

DOES GOD PLAY FAVORITES?
As a new Christian, the more I pursued what it meant to know God and experience genuine spirituality, the more I found many of the standard answers confusing. The conventional paths to pleasing God seemed heavily tilted in the direction of certain personality types. The playing field didn&#8217;t appear to be level. I wondered if God played favorites. On the one hand, I was told that spirituality was within the reach of everyone. On the other hand, I noticed that almost all the books on spirituality and the inner life were
written by introverts&#8212;smart ones at that. I got the distinct impression that God was somehow partial to reflective types with high IQs, impressive vocabularies, and lots of self-discipline. And that left a lot of us on the outside looking in.

DO GOOD READERS MAKE BETTER CHRISTIANS?
I also noticed that reading seemed to be rather important. I&#8217;m obviously not down on reading, or why write a book? But I&#8217;m not quite sure how the ability to read well became the essential tool for
spiritual growth. If I want to know God and experience genuine spirituality, I&#8217;m told to read the Bible daily. If I want to grow really deep, I&#8217;m told to also read the time-honored classics written by the saints of old.
Now, I know the Bible is important; no argument there. But if daily Bible reading and mining the depths of the ancient scholars and mystics is the key to knowing God and God-pleasing spirituality, I wonder how regular folks got there before Gutenberg invented his printing press? Even more to the point, if reading skills are so vital, how can my friend Tony, who&#8217;s severely dyslexic, ever hope to know God?

DO BIBLE SCHOLARS MAKE BETTER CHRISTIANS?
I was also puzzled by our widespread emphasis on proper doctrine as central to having a good relationship with God. I want to make it clear that I personally believe theology and sound doctrine are important&#8212;incredibly important. What I believe about God has an undeniable impact on how I live. Wrong thinking leads to wrong decisions; always has, always will. But didn&#8217;t Jesus say something about the kingdom of heaven belonging to those who are like little children? If he really meant it, how does our insistence on sound doctrine being essential for knowing and pleasing God fit in with a child&#8217;s theological naivet&#233;? Anyone who has ever been around a children&#8217;s Sunday school class knows that these kids have some pretty messed-up theology. They haven&#8217;t got a clue about propitiation, the Trinity, or any of
the other important doctrines of Scripture. If asked, they&#8217;ll say the darnedest things.
But as Jesus pointed out, many of them can and do have a great relationship with God&#8212;and often, a relationship worth emulating. That&#8217;s caused me to wonder if sound doctrine is perhaps more the result of knowing and pleasing God than the primary and indispensable first step before he shows up.

WHEN THE MOLD DOESN&#8217;T FIT
Finally, I wondered why I kept running across so many godly people who felt so ungodly.
I now realize it had more to do with our faulty definitions of spirituality than anything else. In most cases, these people felt like spiritual failures not because they were far from God, but because they&#8217;d been unable to live up to generally accepted measures of spirituality.
They had stalled out in Leviticus each time they tried to read through the Bible. They were kinetic types who found extended prayer not only unfulfilling, but nearly torturous. Or extroverts who&#8217;d bought one of those fancy leather journals, but never got around to putting anything in it.
Mostly, they were regular folks who for whatever reason didn&#8217;t fit the mold too well. They tried it, but sadly found it didn&#8217;t work for them.

A CONTRARIAN&#8217;S PERSPECTIVE
As we explore what it means to know God and experience Godpleasing spirituality in a way that&#8217;s accessible for everyone, you&#8217;ll notice that we take some admittedly contrarian paths. But rest assured, they&#8217;re not contrarian for contrarian&#8217;s sake. If that were the case, they would have no value. Contrarian thinking for the sake of being contrarian is an arrogant waste of time. Claiming that the world is flat just because everyone else says it&#8217;s round is a fool&#8217;s playground. There&#8217;s nothing wrong with conventional wisdom when it&#8217;s right. And most of the time it is. But when it&#8217;s not, someone has to speak up.
Contrarian thinking at its best simply asks, Is that really true? And it speaks up when the politically correct answer or conventional wisdom doesn&#8217;t match reality&#8212;when things don&#8217;t work the way
everyone says they do or thinks they do. Contrarianism also represents a much-needed form of candor. It dares to speak the unspeakable, to voice what others may have been thinking but for some reason have been afraid to say out loud. Much like a young boy standing by the roadside asking, &#8220;Why is the emperor butt naked?&#8221; That&#8217;s the kind of thinking, candor, and courage I hope you&#8217;ll find on the pages to follow. My bet is that you&#8217;ll find some of it incredibly freeing, some of it annoying, some maddening, and some of it still open to debate.

Contrarian thinking
at its best simply asks,
Is that really true?