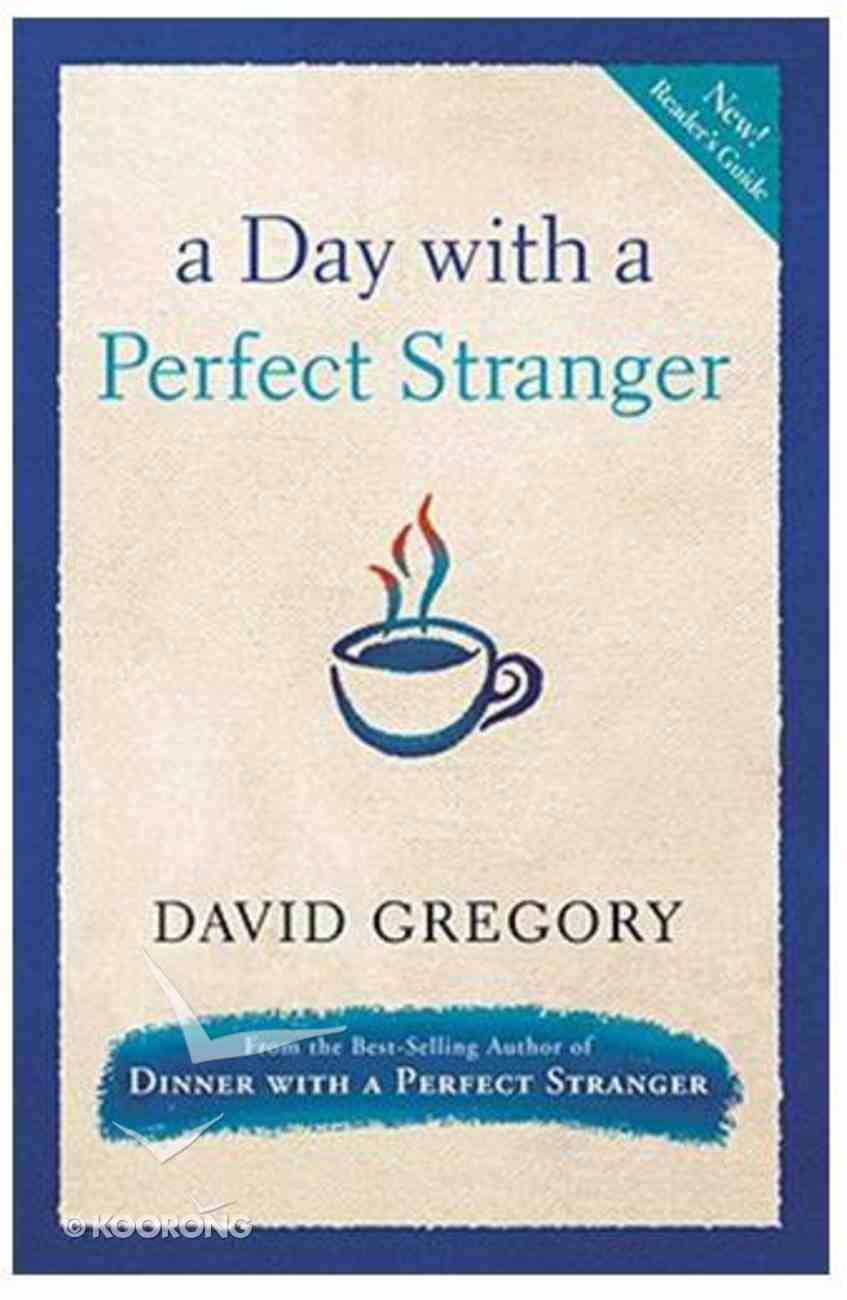 A Day With a Perfect Stranger (With Discussion Guide)

A Journey to the Heart of Evangelism
Janice Keats, Jill Briscoe (Fwd)
eBook

What if a stranger knew you better than you know yourself?

Exasperated by her husband’s sudden new obsession with Jesus, Mattie Cominsky views an out-of-town business trip as a welcome opportunity to reflect on their marriage—and to decide if it’s time to put an end to this painfully unrewarding relationship.

Aboard the plane, Mattie is relieved to find herself seated next to a passenger who shares her scorn for religion. After she confides her husband’s unexpected turn, their conversation soon leads to a fascinating exploration of spirituality, God, and the quest for meaningful connection.

Mattie’s skepticism softens under the perceptive insights of this stranger, and she finds herself confronting the unspoken longings of her soul. As his comments touch on personal issues he couldn’t possibly know about, she begins to wonder if she’s misjudged not only Nick but also the God he now claims to believe in.
-Publisher

David Gregory is the author of "Dinner with a Perfect Stranger" and coauthor of two nonfiction books. After a ten-year business career, he returned to school to study religion and communications, earning two master's degrees. He is a native of Texas. ý"From the Hardcover edition."

I NEVER THOUGHT I’d become the kind of woman who would be glad to leave her family. Not that I wanted to abandon them, exactly. I was just glad to get away for a few days. Or longer, in the case of one of them.
Maybe I should have been celebrating instead of escaping.That’s what you do with big news, isn’t it? And we had plenty.
A few weeks earlier my husband, Nick, told me that he had met Jesus. Not the usual “getting saved” kind of meeting Jesus. I mean, met Jesus. Literally. At a local Italian restaurant.
At first I thought he was joking, of course. He wasn’t. Then I thought he had been hallucinating. He had, after all, been putting in seventy-hour weeks at work and getting limited sleep. But he stuck to his story, which left me with— I didn’t know what.
All I knew was that my husband was convinced he had dined with Jesus, and he had turned into some kind of Jesus freak. It was bad enough that he had previously disappeared into his work. Now when we were together, God was all he wanted to talk about. That wasn’t the “till death do us part” I had planned on.
Things had been strained enough between us without bringing God into the mix. It was as if someone had kidnapped the real Nick and replaced him with a religious Nick clone. There we were, plugging along in our marriage, and suddenly Nick, who wouldn’t be caught dead in a church parking lot, is best friends with Jesus.
It’s not that I object to religion. People can believe whatever they want to. I just didn’t grow up religious, hadn’t become religious, and didn’t marry someone religious. And I wanted it to stay that way.
So getting away from Nick for four days was a relief. What I hated was leaving Sara, my two-year-old. Granted, I looked forward to the break, as any mother would. But I had never been away from her longer than two nights, and even then I found myself missing her by the second day. And that was with my mom coming down to take care of her. At least I trusted my mom. No telling what might happen with Nick doing the childcare. Not that he was a bad dad, when he was both home and off his cell phone.
But I had to take this trip. A client had built a resort hotel near Tucson and wanted me to design new brochures for it. The manager insisted on giving me a personal tour of the place. She said I needed to experience it firsthand to fully capture its essence. And get a free massage, I hoped. I rarely had to travel for my graphic-arts work, which was fine with me. Most of the business I had developed since we’d moved to Cincinnati was local. Sometimes I went back to Chicago on a job, but I could handle most of my old accounts online. This, however, was my biggest client—had been for six years—and I couldn’t exactly say no.
The trip should have been a one-day there-and-back. Two at the max. But since you can’t get a nonstop from Cincinnati to Tucson, I booked my flight through Dallas, which meant I had to take two travel days.
I could hardly imagine a less appealing way to spend two days of my life. I don’t much like air travel, anyway. I’d rather just throw some stuff in the car and hit the road. In a car no one has you stand in line or searches your purse or forces you to eat dry pretzels for a snack. Nor does anyone pull you aside, have you extend your arms, and run a baton all over your body. Why do I always get singled out? Plus, I didn’t feel the best this particular morning. I knew that getting on a plane without any breakfast wasn’t a brilliant idea since they don’t serve even those tasteless box meals anymore. But I figured I could break down and buy a snack box if I had to.
Before heading out the front door, I wrote a note and left it on the kitchen counter.

Sara’s pajamas are in the top drawer, if you don’t remember. You may not, since you haven’t put her to bed this year. Her toothbrush is in the left drawer in her bathroom. I left plenty of juice, oatmeal, and cereal for breakfasts. Plus she likes toast and jelly. There’s a macaroni casserole she likes in the fridge and some frozen veggies. After that runs out, she likes Chick-fil-A. Don’t forget story time at the library tomorrow at 10:30. You can reach me on my cell if you need me for anything about Sara. Hope you and
Jesus have a great time together.

Unofficial Chaplain: A Handbook For Everyday Service to the People Around You
Warren Crank
Paperback