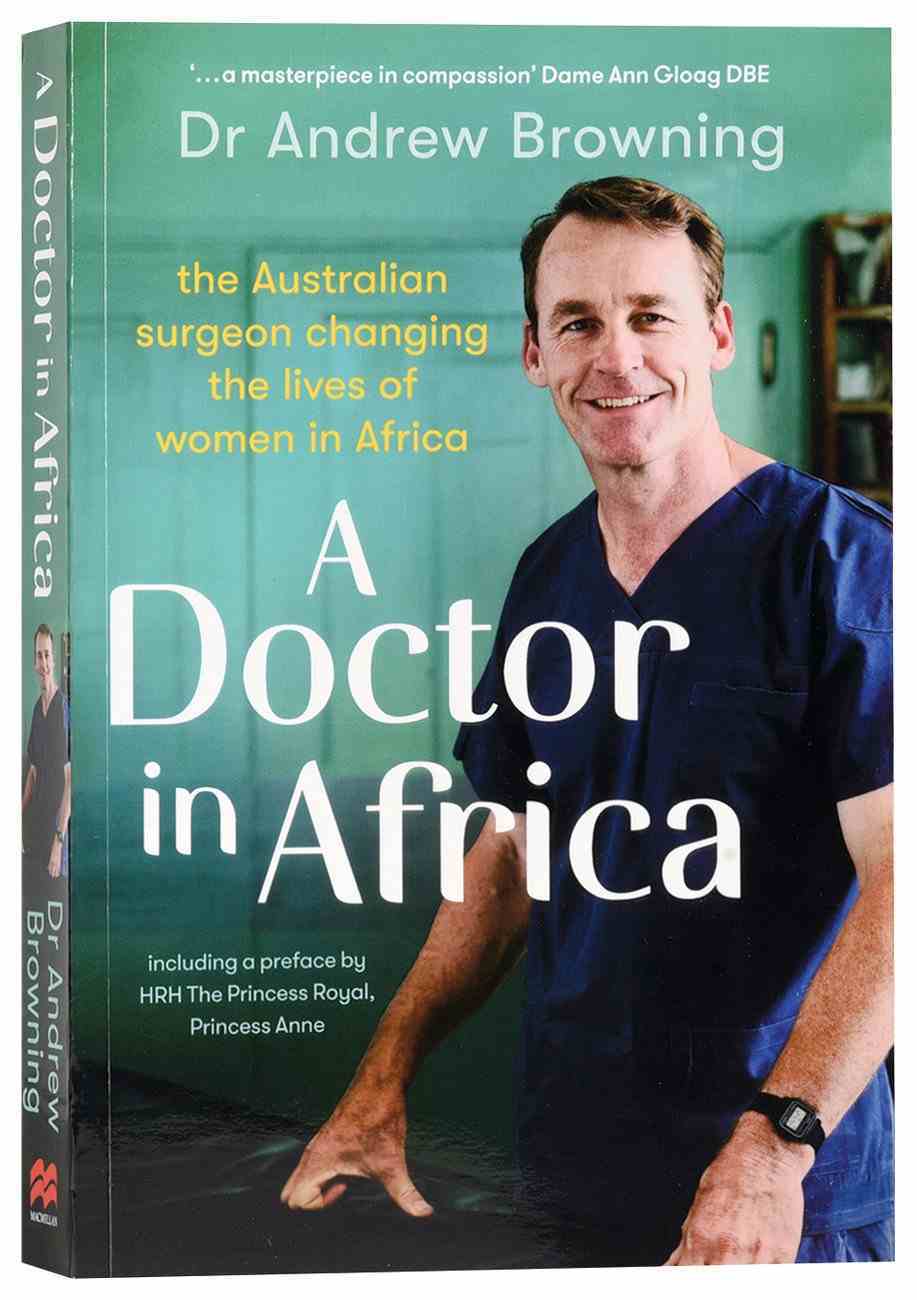 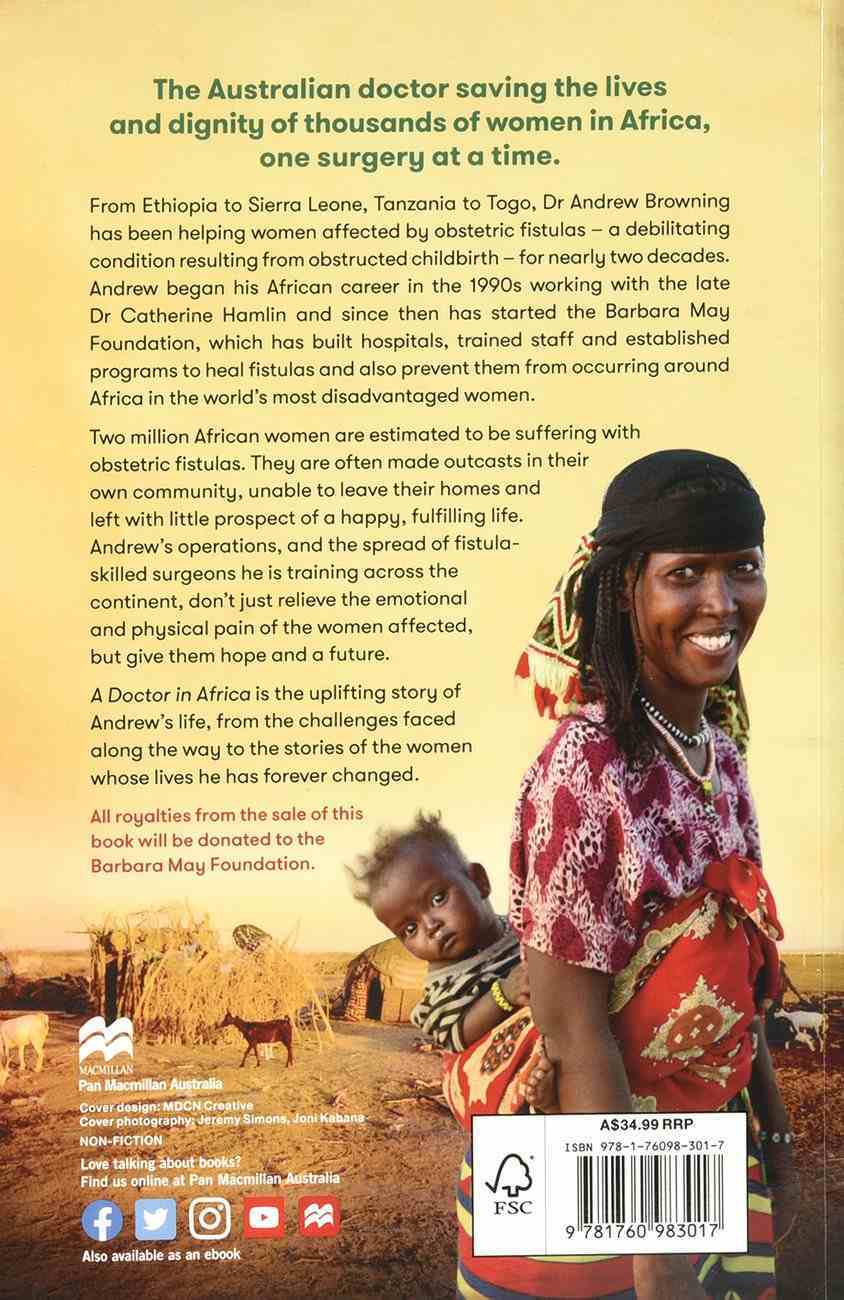 A Doctor in Africa

Including a preface by HRH The Princess Royal, Princess Anne.The Australian doctor saving the lives and dignity of thousands of women in Africa, one surgery at a time. From Ethiopia to Sierra Leone, Tanzania to Togo, Dr Andrew Browning...

Including a preface by HRH The Princess Royal, Princess Anne.

The Australian doctor saving the lives and dignity of thousands of women in Africa, one surgery at a time.

From Ethiopia to Sierra Leone, Tanzania to Togo, Dr Andrew Browning has been helping women affected by obstetric fistulas - a debilitating condition resulting from obstructed childbirth - for nearly two decades. Andrew began his African career in the 1990s working with the late Dr Catherine Hamlin and since then has started the Barbara May Foundation, which has built hospitals, trained staff and established programs to heal fistulas and also prevent them from occurring around Africa in the world's most disadvantaged women.

Two million African women are estimated to be suffering with obstetric fistulas. They are often made outcasts in their own community, unable to leave their homes and left with little prospect of a happy, fulfilling life. Andrew's operations, and the spread of fistula-skilled surgeons he is training across the continent, don't just relieve the emotional and physical pain of the women affected, but give them hope and a future.

A Doctor in Africa is the uplifting story of Andrew's life, from the challenges faced along the way to the stories of the women whose lives he has forever changed.

All royalties from the sale of this book will be donated to the Barbara May Foundation.


Praise for A Doctor in Africa:

'Andrew's compassion for the women of Africa will inspire and uplift you. Written with warmth and enormous empathy, this book will make you cry - often with tears of joy - and on turning the page have you laughing out loud. A Doctor in Africa is a masterpiece in compassion, sensitivity and caring.' Dame Ann Gloag DBE. Founder, Freedom From Fistula

'Andrew Browning's deep compassion and wonderful surgical skills have given new life to thousands of mothers suffering severe, often horrific childbirth injuries. This Australian doctor has dedicated his life to helping women in Ethiopia, Tanzania and right throughout Africa and beyond regain their dignity and place in society.' Dr Robert Tong AM, Chair, Hamlin Fistula Australia

'Through Dr Browning's astonishing work, countless women shunned even by their own communities are healed, and rivers of tears are turned to laughter and joy. You will cry, you will weep, you will be aghast, but ultimately you will thank God for people like Andrew Browning. Read this if you want your heart broken, then sewn back together richer and pumping with gratitude.' Canon Tim Swan, CEO Anglican Aid

'Dr Andrew Browning is known to us as "the surgeon of difficult cases". In his book, he brings us real stories of the victims of fistula, but with restored good health. Andrew is a compassionate, skilled, devoted, young surgeon who has brought hope and dignity to many vulnerable African women. He awakens our inner being, moving us to become more compassionate.' Sister Dr Imelda Nabukalu, Deputy Medical Director Kitovu Mission Hospital, Masaka, Uganda

'Following in the footsteps of his legendary mentor, Dr Catherine Hamlin, Dr Andrew Browning's extraordinary life is as fascinating as it is inspiring. Dr Browning is living out his faith by giving the priceless gift of health to multitudes of African women suffering horrendous injuries simply for trying to bring a child into the world.' Kate Grant, CEO of the Fistula Foundation USA

'I urge you to take up this wonderful read and find your heart deeply thankful and your mind wonderfully informed. The work that Andrew has been doing is a bright signpost to the God he serves. If there is a more thrilling description of what one Aussie doctor has seen and done in African villages to get women restored and rejoicing I'd like to know about it. This book is one of the best antidotes to despondency and doubt I have ever read.' Simon Manchester, Former Rector, St Thomas Anglican Church North Sydney

'Andrew's deep connection with Africa, the land and her people is both confronting and inspiring. Restoring dignity to a marginalised woman is powerful for that individual and her society. His message is one of joy, and hope for a better world.' Dr Vijay Roach, President, Royal Australian and New Zealand College of Obstetricians and Gynaecologists

'Like an Odysseus of modern Africa, Andrew Browning's extensive, interesting and compassion-rich travels with his family to care for local women are also amazing for their rugged versatility and adventurous brio. An exciting story off the beaten track, both literally and medically.' Richard Hamlin

'It has been a privilege to know and work with Dr Andrew Browning. He has been a mentor, role model and great fistula surgeon. He has surrendered his life to help fistula patients. His dedication in fistula work has brought smiles to thousands of women. His life story is inspirational and I would wish to walk in his footsteps.' Dr James J. Chapa, MD, MMed (Obs/Gyn), MPH, Fistula Surgeon and FIGO Accredited Trainer, CCBRT Hospital, Dar es Salaam, Tanzania

Dr Andrew Browning AM is an Australian-trained obstetrician, gynaecologist and senior fistula surgeon. In 2001, he joined Dr Catherine Hamlin in her first fistula hospital in Ethiopia and five years later took charge of the first regional Hamlin Fistula hospital. In 2009 he started his own charity, the Barbara May Foundation, to take the work that the Hamlins had started out of Ethiopia to the rest of Africa, and focus more on fistula prevention.

Today, Andrew divides his time between Australia and Africa. He was named as a Member of the Order of Australia in 2019 in recognition of his outstanding contributions to improving maternal health care for women in poverty.

Dr Andrew Browning AM is an Australian-trained obstetrician, gynaecologist and senior fistula surgeon who has worked in Ethiopia and Tanzania. Andrew spent his elective term at Murgwanza at the beginning of the Rwandan genocide. In 1996, he visited his aunt Valerie Browning and Dr Catherine Hamlin at the fistula hospital in Addis Ababa and was immediately invited to work there. In 2001 he joined Catherine Hamlin in her fistula hospital and five years later, he and his wife moved to Bahir Dar in Northern Ethiopia where he took charge of the first regional Hamlin Fistula hospital. In 2009 he started his own charity, the Barbara May Foundation, to take the work that the Hamlin's had started out of Ethiopia to the rest of Africa and to also focus more on fistula prevention.Andrew has led a team that have gone on to transform several health centres into safe and functional maternal health centres and to build and run charity maternity hospitals for poor women, and those living in remote regions.In an effort to help the more than two million women estimated to be suffering with existing obstetric fistula injuries throughout Africa, Andrew has provided and continues to provide fistula treatment and surgical training in Malawi, Sierra Leone, Kenya, Chad, Uganda, Somaliland, South Sudan, Togo, Democratic Republic of the Congo as well as India, Bangladesh and Nepal, He also consults on global maternal health care issues to United Nations Fund for Population Activities and the International Federation of Gynaecology and Obstetrics. Today, Andrew divides his time between Australia and Africa. He was named as a Member (AM) of the Order of Australia in 2019 in recognition of his outstanding contributions to improving maternal health care for women in poverty.