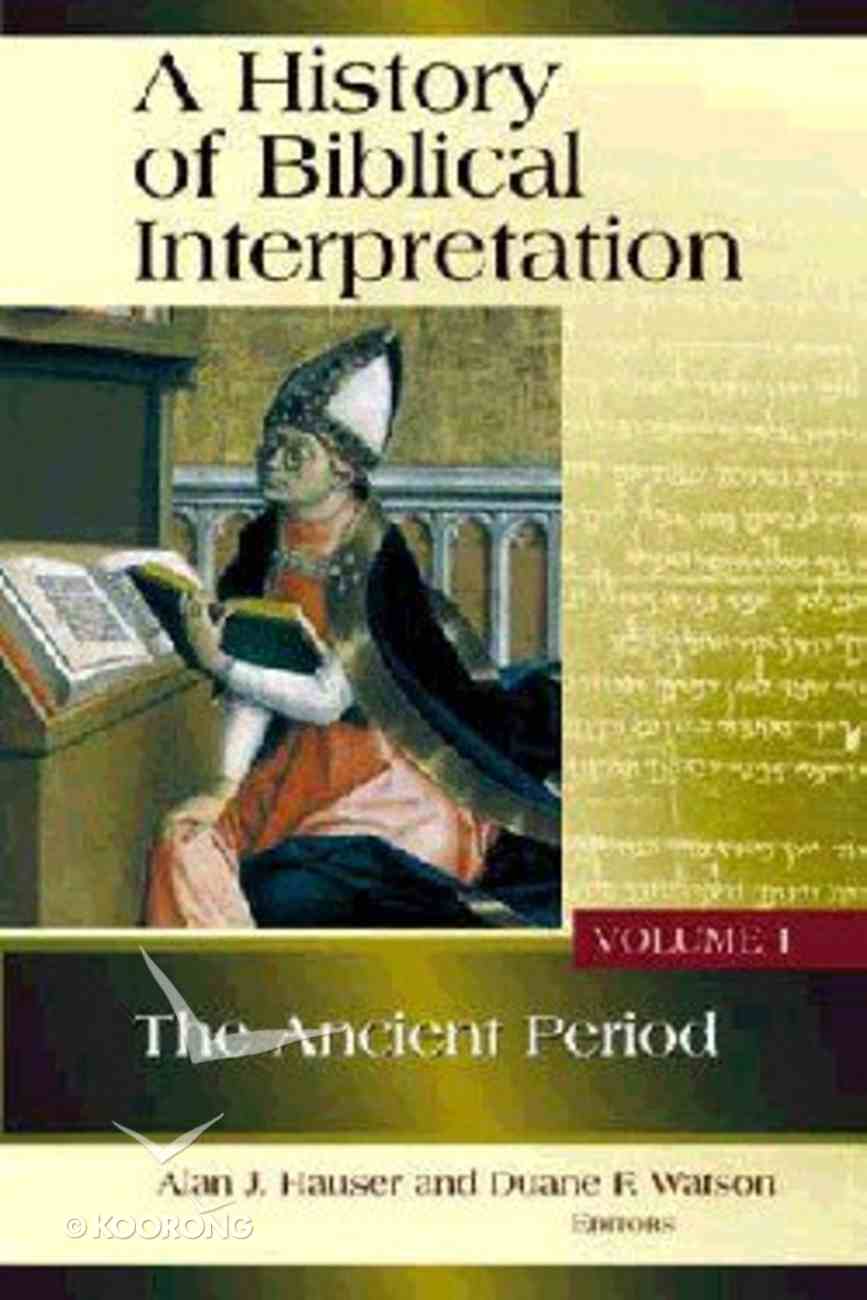 A History of Biblical Interpretaion: The Ancient Period (Vol 1)

The first installment in a major new multivolume work on the history of biblical interpretation, this book provides a detailed discussion of the key figures, texts, and issues crucial to biblical interpretation in the ancient Jewish and Christian communities. Written by internationally renowned experts, this volume explores the history of biblical interpretation in the ancient world from several points of view. Chapters cover the historical period beginning with the very earliest stages of interpretation, when the first oral stories were formed, to the time when the canons of Judaism and Christianity gained general acceptance. Scholarly yet accessible, this volume will become an important reference tool for anyone interested in hermeneutics, ancient Judaism, or the early church.
-Publisher

At first glance, it may seem strange that after more than two thousand years of biblical interpretation there are still major disagreements among biblical scholars about what the Jewish and Christian Scriptures say and about how one is to read and understand them. Yet the range of interpretive approaches now available is the result both of the richness of the biblical texts themselves and of differences in the worldviews of the communities and individuals who have sought to make the Scriptures relevant to their own time and place."A History of Biblical Interpretation" provides detailed and extensive studies of the interpretation of the Scriptures by Jewish and Christian writers throughout the ages. Written by internationally renowned scholars, this multivolume work comprehensively treats the many different methods of interpretation, the many important interpreters who have written in various eras, and the many key issues that have surfaced repeatedly over the long course of biblical interpretation.This first volume of "A History of Biblical Interpretation" explores interpreters and their methods in the ancient period, from the very earliest stages to the time when the canons of Judaism and Christianity gained general acceptance. The first part of the book concentrates on the use of the Scriptures within Judaism. Chapters examine inner-biblical exegesis in the Tanak, the development of the Septuagint, the exegetical approach of Philo of Alexandria, biblical interpretation in the Dead Sea Scrolls and the Targumim, the nature of rabbinic midrash, the stabilization of the Hebrew Bible, and the interpretation of the Bible in the Jewish Apocrypha and Pseudepigrapha. The secondpart of the book probes themes specific to Christian interpretation of the biblical texts. Chapters here discusses how Israel's Scriptures are used in the New Testament writings, the hermeneutical approaches of the Apostolic Fathe
-Publisher

Duane F. Watson (PhD., Duke University) is professor of New Testament studies at Malone College, Canton, Ohio. He is also the author of Invention, Arrangement, and Style: Rhetorical Criticism of Jude and 2 Peter, I-III John (New Cambridge Bible Commentary), 1 Peter (Paideia Commentaries on the New Testament), Philippians and Johannine Epistles (Rhetoric of Religious Antiquity), editor of Persuasive Artistry: Studies in New Testament Rhetoric, and co-author of Rhetorical Criticism of the Bible: A Comprehensive Bibliography with Notes on History and Method..

Alan J. Hauser is professor of biblical studies at Appalachian State University, Boone, North Carolina. He is also co-editor of Art and Meaning: Rhetoric in Biblical Literature along with the two volumes A History of Biblical Interpretation, and co-author of From Carmel to Horeb: Elijah in Crisis and Rhetorical Criticism of the Bible: A Comprehensive Bibliography with Notes on History and Method.