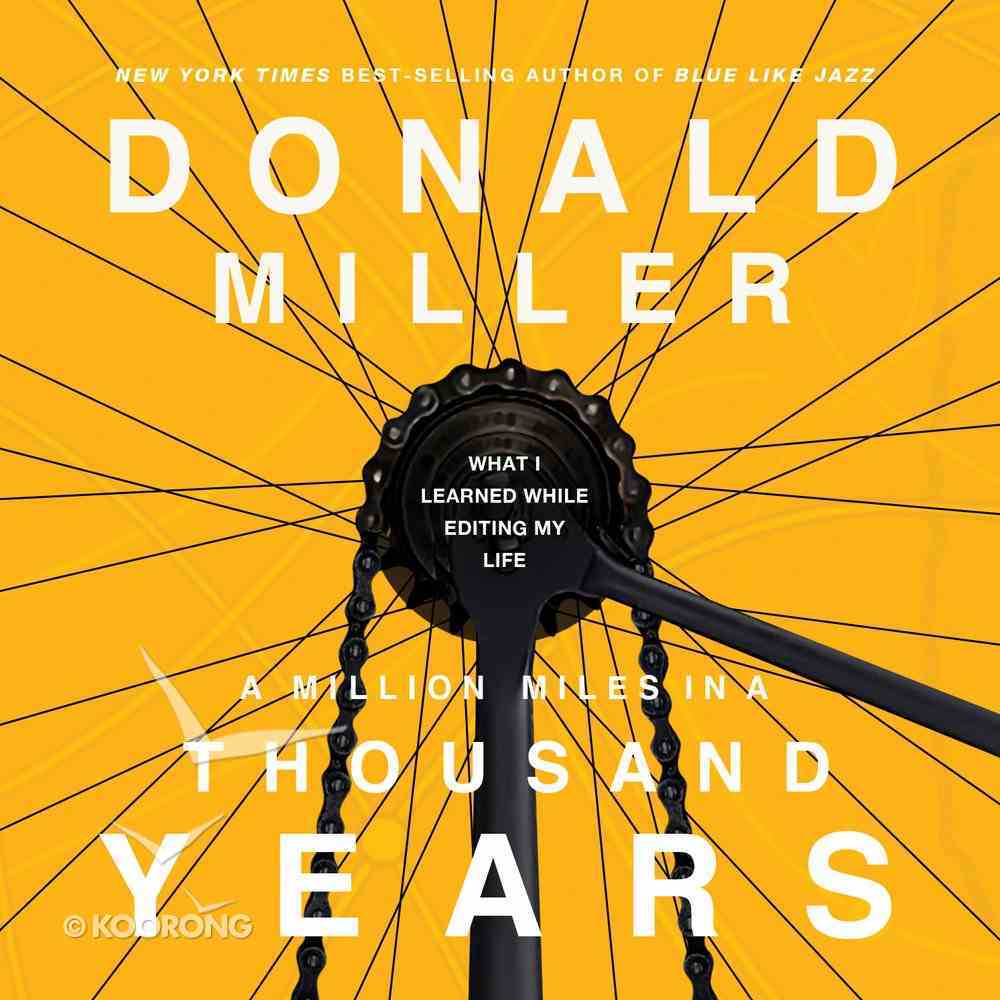 A Million Miles in a Thousand Years

Full of beautiful, heart-wrenching, and hilarious stories, A Million Miles in a Thousand Years details one man's opportunity to edit his life as if he were a character in a movie. ^^Years after writing a best-selling memoir, Donald Miller went...

The Fight to Flourish: Engaging in the Struggle to Cultivate the Life You Were Born to Live (Mp3)
Jennie Lusko
CD

Bible in One Year: The a Commentary By Nicky Gumbel (Unabridged, 6 Cds)
Nicky Gumbel
CD

Having a Mary Heart in a Martha World
Joanna Weaver
CD

Do Yourself a Favor...Forgive (Unabridged, 5cds)
Joyce Meyer
CD

Full of beautiful, heart-wrenching, and hilarious stories, A Million Miles in a Thousand Years details one man's opportunity to edit his life as if he were a character in a movie.
^^Years after writing a best-selling memoir, Donald Miller went into a funk and spent months sleeping in and avoiding his publisher. One story had ended, and Don was unsure how to start another.


^^But he gets rescued by two movie producers who want to make a movie based on his memoir. When they start fictionalizing Don's life for film--changing a meandering memoir into a structured narrative--the real-life Don starts a journey to edit his actual life into a better story. A Million Miles in a Thousand Years details that journey and challenges readers to reconsider what they strive for in life. It shows how to get a second chance at life the first time around.


^^ ^^I love Donald Miller. He is a man after my own heart.
Anne Lamott, New York Times best-selling author of Traveling Mercies; Grace (Eventually), and Bird by Bird.


^^If someone tells you they've read this book and they "enjoyed it" or they "liked it" or they think it's a "good hook" then maybe they didn't read it - it's well written and funny and interesting and all that, but it's also disturbing. Really, really disturbing. Don is into provocative territory here, wrestling with The Story and the role each our stories play in it . . . this is very convicting, powerful, unsettling writing. I felt like this book read me more than I read it.
Rob Bell, author of Velvet Elvis


^^I've never been in Donald Miller's living room, but this book makes me feel that I have. The stories compel, the humor works, and Don's wisdom stealths its way on to the pages. I already want to re-read it.
Max Lucado, New York Times best-selling author of 3:16 and Fearless^
-Publisher.


What if you could turn your life into a great story?


When two filmmakers worked with Donald Miller to edit his bestselling book Blue Like Jazz for the Hollywood screen, they changed the events of his life to make them more exciting. When he asked why, they kindly explained that his real life was too boring! While watching the movie version of his memoir take shape, Don realized the same principles that guide professional storytellers could work in directing a person's daily experiences. In Let Story Guide You, Donald Miller undertakes a humorous and revealing journey as he edits his life into a purposeful and meaningful experience. And in his trademark style, he invites readers into their own process of looking at life through the lens of what makes for a memorable and satisfying story.

:
After writing a successful memoir, Donald Miller's life stalled. During what should have been the height of his success, he found himself unwilling to get out of bed, avoiding responsibility, even questioning the meaning of life. But when two movie producers proposed turning his memoir into a movie, he found himself launched into a new story filled with risk, possibility, beauty, and meaning.


A Million Miles in a Thousand Years chronicles Miller's rare opportunity to edit his life into a great story, to reinvent himself so nobody shrugs their shoulders when the credits roll. Through heart-wrenching honesty and hilarious self-inspection, Donald Miller takes readers through the life that emerges when it turns from boring reality into meaningful narrative.


Miller goes from sleeping all day to riding his bike across America, from living in romantic daydreams to fearful encounters with love, from wasting his money to founding a nonprofit with a passionate cause. Guided by a host of outlandish but very real characters, Miller shows us how to get a second chance at life the first time around. A Million Miles in a Thousand Years is a rare celebration of the beauty of life.

Donald Miller grew up in Houston, TX. Leaving home at the age of 21, he traveled across the country until he ran out of money in Portland, OR, where he lives today.
In 2002, after having audited classes at Reed College, Don wrote Blue Like Jazz, which would slowly become a NY Times bestseller. In 2004 Don released Searching For God Knows What, a book about how the Gospel of Jesus explains the human personality. In 2005 he released Through Painted Deserts, the story of his and a friend's road trip across the country. Recently he has released A Million Miles in a Thousand Years: What I Learned While Editing My Life


A sought-after speaker, Don has delivered lectures to a wide range of audiences, including the Women of Faith Conference, the Veritas Forum at Harvard University, and the Veritas Forum at Cal Poly. In 2008 Don was asked to deliver the closing prayer on Monday night at the Democratic National Convention in Denver, CO.
-Editorial Review.