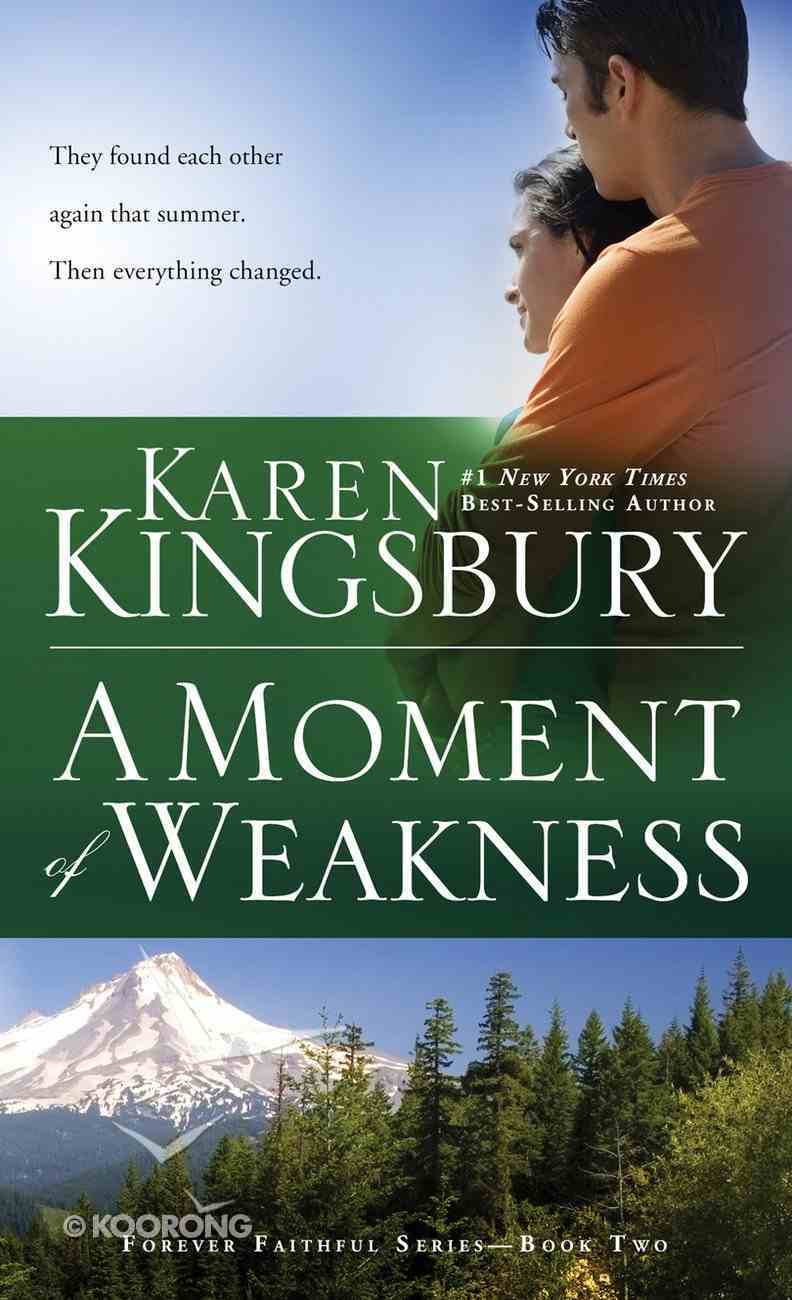 A Moment of Weakness (#02 in Forever Faithful Series)

: Had they found each other again after all these years, only to lose everything that matters most? As children, Jade Conner and Tanner Eastman were best friends-until scandal drove them apart. Then, one golden summer, they find...

:
Had they found each other again after all these years, only to lose everything that matters most?

As children, Jade Conner and Tanner Eastman were best friends-until scandal drove them apart. Then, one golden summer, they find each other again. Through endless days they share their hearts and souls and dreams of forever. Then, in a moment of weakness, they make a decision that will tear them apart for nearly a decade.


In their own separate corners of the country, Jade and Tanner have become fighters for religious freedom. Now Jade's unfaithful husband is determined to destroy her in a custody battle that will rock the nation and shake people's understanding of faith and freedom. Could Jade lose her only child because of her faith? Only one man can help her in her darkest hour. And only one old woman knows the secret about that summer and the truth that can set them all free.

THE OLD BIDDIES SAT IN A CIRCLE, THEIR TIGHTLY KNOTTED HEADS
turning this way and that like vultures eyeing a kill. Only this time the carcass was the Conner family, and no one was quite dead yet.

Hap Eastman watched from a corner of the Williamsburg Community Church fellowship hall. He&rsquo;d done his part. Started the coffee, laid out the pastries, set up the chairs. It was something he did every Saturday morning for the Women&rsquo;s Aid Society, and every time it was the same. The old girls started with a list of needs and prayer requests and ended with a fullblown gossip session.

Hap&rsquo;s wife, Doris, was president, and at forty-five the youngest of the group. So Hap hung around tinkering with fixit jobs in the kitchen or perched on a cold metal folding chair in the corner, a cup of fresh brewed French Roast in one hand and a Louis L&rsquo;Amour novel in the other. Four days a week he was a jurist laden with a heavy workload and weighty decision making. Saturdays were his day to relax.

Hap had already heard the story from Doris and generally when the birds got going, he tried not to listen. But days like this it was nearly impossible.

&ldquo;I don&rsquo;t care what anyone says. We need to talk about it.&rdquo; Geraldine Rivers had the floor, and Hap eyed her suspiciously from a distance. Geraldine was a talker from way back and in charge of the social committee. Generally when the gossip got going, Doris and Geraldine fanned the fires and battled for position. Especially in the heated sessions, and Hap figured this was about as hot as they&rsquo;d ever get.

&ldquo;We haven&rsquo;t read the minutes yet.&rdquo; Louella tilted her face in Geraldine&rsquo;s direction. The minutes were still tucked in her unopened Bible, so her comment was more for appearances than anything else.

&ldquo;Minutes mean nothing at a time like this!&rdquo; Geraldine nodded toward Doris. &ldquo;Tell us what you know, will you, Dorie? Several of the ladies here haven&rsquo;t heard what happened.&rdquo;

The vultures nodded in unison, and Doris took her cue.

&ldquo;It&rsquo;s really very tragic, very sundry. I almost hate to talk about it at church.&rdquo; She paused for effect, smoothing the wrinkles in her polyester dress. &ldquo;You all know the Conner family, Angela and her husband, Buddy&mdash;&rdquo;

&ldquo;Buddy&rsquo;s been drinking alcohol at the tavern lately. Louella&rsquo;s husband saw his truck there last week, isn&rsquo;t that true?&rdquo; Geraldine knew this to be true but enjoyed her own voice too much to be silent for long.

Doris frowned. &ldquo;Right. He&rsquo;s become a regular drunkard. Now, Angela&hellip;well, she&rsquo;s another story. A flirtatious type, not given to things of the Lord.&rdquo; She looked around the circle. &ldquo;Nearly everyone in Williamsburg has suspected her of cheating on Buddy.&rdquo;

&ldquo;Well, yesterday I got a call from Betty Jean Stevens&hellip;you&rsquo;ve probably noticed she&rsquo;s not here today.&rdquo; Doris&rsquo;s face bunched up like it did when Hap forgot to take out the trash. &ldquo;Seems all those rumors were true. Betty Jean found out last week that her husband&rsquo;s been seeing Angela Conner on the side. And I don&rsquo;t mean at the Piggly Wiggly.&rdquo;

A collective gasp rose from the circle, and six of the girls started talking at once.

&ldquo;He&rsquo;ll need to make a public apology before I forgive him!&rdquo;

&ldquo;I knew something was happening between those two!&rdquo;

The cacophony of accusations grew until Geraldine rapped her fist on the table. &ldquo;Quiet, all of you! Quiet!&rdquo;

They had obviously forgotten about Hap and his novel, and he gazed at them over the top of his book. The biddies fell silent again, and Geraldine lowered her gaze, trying to look appropriately indignant. &ldquo;There&rsquo;s more&hellip;.&rdquo;

Doris brought her hands together in a neat fold. &ldquo;Yes.&rdquo; She drew a deep breath. &ldquo;For the past few weeks Bill&rsquo;s been&hellip;taking a motel room with the Conner woman. Apparently she set about trying to seduce him for some time. And&hellip;well&hellip;&rdquo;

&ldquo;There&rsquo;s a temptress in every town!&rdquo; Geraldine obviously intended to maintain her presence even if it was Doris&rsquo;s story.

&ldquo;I do declare, Angela Conner&rsquo;s a harlot. She&rsquo;s always been a whore!&rdquo; Geraldine snapped at a lemon pastry and dabbed fiercely at the filling it left on her lips.

The birds were nodding their interest, waiting breathlessly for the rest of the story.

Doris sipped her coffee, and Hap knew she was enjoying the way she held her audience captive. &ldquo;Last night&hellip;Bill Stevens ran off with her. The two of them. Just like that, they up and left town.&rdquo;

Several of the women were on their feet firing questions.

Doris kept her back stiff, her nose in the air. Hap hated it when she got uppity, and this was one of those times. She answered their questions with all the condemnation she could muster.

&ldquo;Yes. Betty Jean says Bill sat her down last night and told her they were through. Told her he&rsquo;s in love with Angela, and they&rsquo;re starting a new life in Washington, D.C.&rdquo;

&ldquo;She&rsquo;s ashamed, broken. But she saw it coming. About a year ago, Bill began meeting with Angela to talk about a business venture.&rdquo;

&ldquo;I guess we all know what type business&mdash;&rdquo; Geraldine spat the word the way boys spit watermelon seeds on a summer day&mdash;&ldquo;that was, don&rsquo;t we?&rdquo;

Doris hesitated. &ldquo;Betty Jean&rsquo;s just thankful the children are grown and out of the house.&rdquo;

&ldquo;Angela Conner was bad blood from the get-go. Last year, I think she was seeing that attorney in town. You know, the divorce lawyer.&rdquo;

&ldquo;I&rsquo;m sure you&rsquo;re right. Everyone this side of Richmond knows the Conner woman and how she was always sniffing around for a man to bed.&rdquo;

Hap raised an eyebrow. A man to bed?

&ldquo;Buddy&rsquo;s disgraced, as well he should be. Any man who can&rsquo;t keep his wife at home should be ashamed of himself.&rdquo; Doris looked at Geraldine for approval. &ldquo;And I have it on good word that he won&rsquo;t be back to Williamsburg Community Church.&rdquo;

&ldquo;I certainly hope not.&rdquo; Geraldine finished the pastry and wadded her napkin into a tight ball of crumbs and sticky paper. &ldquo;The man&rsquo;s a drunkard.&rdquo;

There were several nods of approval, then one of the vultures gasped. &ldquo;Oh, dear heaven. What&rsquo;s going to happen to little Jade?&rdquo;

Geraldine did nothing to hide her righteous indignation. &ldquo;Isn&rsquo;t she the one who pals around with your Tanner?&rdquo;

A deep crimson fanned across Doris&rsquo;s face. &ldquo;The Conners live in our neighborhood, in Buddy&rsquo;s mother&rsquo;s house. Tanner is about the same age as the Conner girl, so it&rsquo;s only natural that the two play together. It doesn&rsquo;t happen often.&rdquo;

Doris wasn&rsquo;t telling the entire story, and Hap knew why. The reason was an ugly one. He and Dorie had two boys: Harry was twenty and worked for the city dump&mdash;a detail Dorie never told the girls at the Women&rsquo;s Aid Society. Then there was Tanner. Even at twelve years old, Tanner was everything Harry hadn&rsquo;t been. He was bright and handsome and the finest athlete in primary school. Doris thought he was going to be president of the United States one day. How would it look if he had already made the social mistake of befriending the child of a woman like Angela Conner?

Of course, there were other reasons Doris detested the children&rsquo;s friendship. More complicated reasons. But Hap didn&rsquo;t want to think about those on a sunny Saturday in May when he was supposed to be relaxing. He shifted positions, but the biddies were too caught up to notice him.