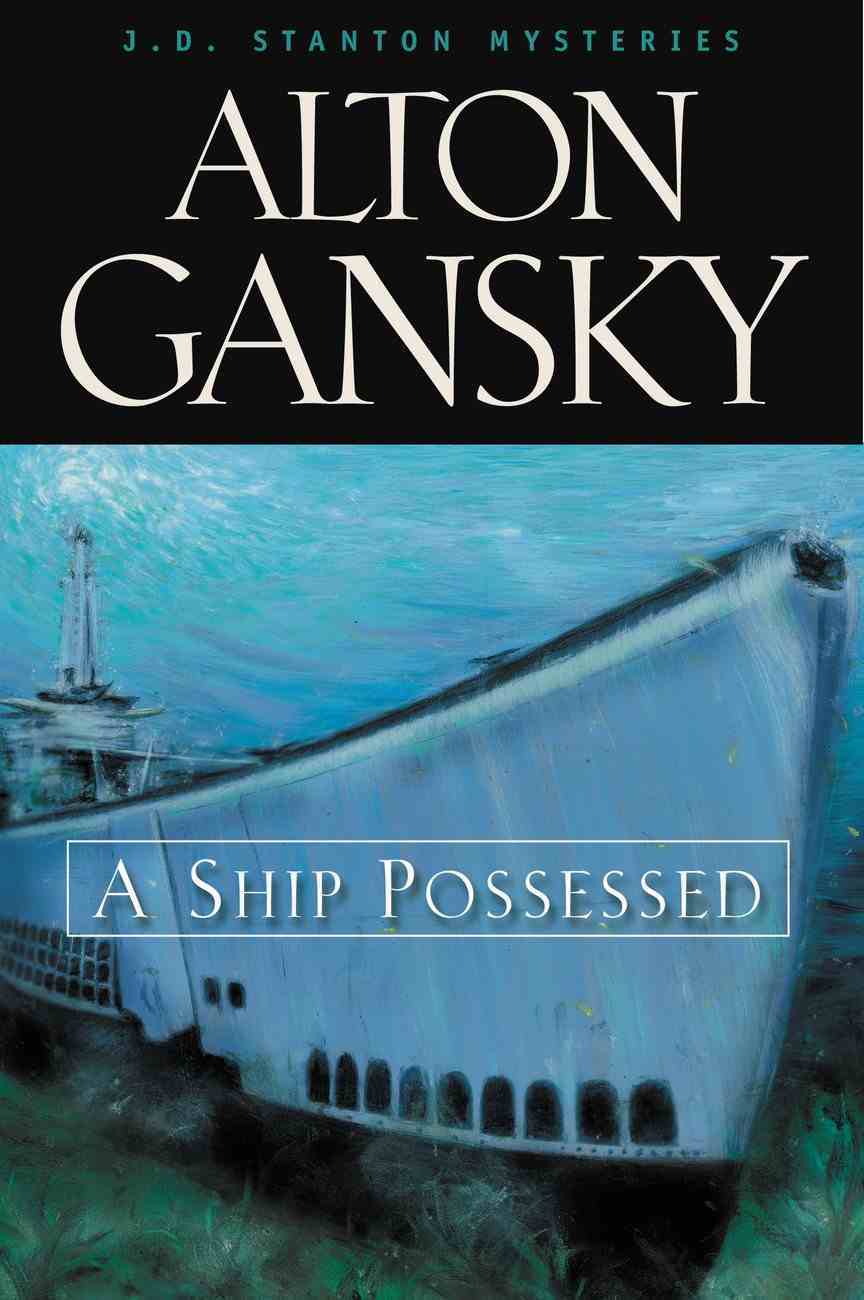 An American World War II submarine has come home over fifty years after she was presumed lost in the Atlantic. The Triggerfish is in the wrong ocean, with no sign of the crew, and the mystery is about to deepen....

An American World War II submarine has come home over fifty years after she was presumed lost in the Atlantic. The Triggerfish is in the wrong ocean, with no sign of the crew, and the mystery is about to deepen. Something is inside her. something unexpected, unknown and terrible. 329 pages, from Zondervan

The USS Triggerfish--an American World War II submarine--has come home over fifty years after she was presumed lost in the Atlantic. Now her dark gray hulk lies embedded in the sand of a San Diego beach, her conning tower barely above the breaking surf. The submarine is in the wrong ocean, her crew is missing . . . And her half-century absence is a mystery that's about to deepen. For the Triggerfish has returned, but she has not returned alone. Something is inside her -- something unexpected and terrible. To J. D. Stanton, retired Navy captain and historian, falls the task of solving the mystery surrounding a ship possessed. What he is about to encounter will challenge his training, his wits, and his faith. Complicating his mission is a ruthless madman bent on obtaining a secret artifact stolen from the highest levels of the Nazi regime. And poised in the middle is a young woman, a lieutenant who must contend with invisible forces she never knew existed. A Ship Possessed is a story of faith, courage, and determination in the face of unexpected and unknown evil.
-Publisher

Alton L. Gansky is the author of eight popular novels, including A Ship Possessed, Terminal Justice, and his newest release, Distant Memory. He is also the senior pastor of High Desert Baptist Church in Phelan, California, where he has served for more than a decade. He and his wife, Becky, are the parents of three college-aged children.ý

Chapter 1 A hushed voice: 'Stanton has to be happy with this. After slicing his drive into the rough, then two stroking onto the green, he now lacks a fifteen-foot putt to be one over par. Of course, fifteen feet is a long way, especially over mixed grass with a diverse cross grain that.' 'Do you mind?' J. D. Stanton snapped. 'I'm trying to play a little golf here.' Jim Walsh cleared his throat and grinned sheepishly. 'Sorry, just trying to create a little atmosphere.' 'I know what you're trying to do. You're a stroke behind. If I miss this putt we'll be even and you'll have your first and best chance of beating me.' 'I I'm hurt,' Walsh said, his voice oozing with insincerity. 'Sure you are.' Stanton lowered his head, eyed the cup, then the ball. Slowly he drew back the putter and gently swung it forward. The club head made a soft 'clack' as it struck the ball. Starting off straight, the ball began a slow curve toward the hole. A moment later it dropped in. 'You are the luckiest man in the world, Captain Stanton,' Walsh said loudly. 'That ball should have stopped short by two feet, but no, it just kept rolling. And do you know why?' 'Because the universe is centered around me?' Stanton replied with false arrogance. 'There are plenty of people who would debate that with you including my sister.' 'I remind you,' Stanton said as he placed his putter back in his golf bag, 'that your sister has been my wife for twenty-five years. She's still happy about that, you know.' 'That's because she doesn't play golf with you.' Both men laughed as they stepped into the golf cart. 'True, she is a wise woman.' 'I still think you're the luckiest man on earth.' Stanton looked around the verdant golf course. He agreed. He was fortunate, indeed. His whole life seemed blessed, a fact that was not wasted on him. Of his thirty years in military life, four had been spent as a student at Annapolis, fourteen in service aboard or around submarines, and six years as captain of his own Ohio class nuclear sub. The final six years, he had taught naval history at Annapolis. Forty-eight years old and six months into retirement, he spent his days writing history books, reading, and playing golf. 'Well,' Stanton said finally, 'are we going to talk until it's dark, or are we going to play the final two holes?' Jim Walsh did not answer right away. He was looking toward the frontage road that ran by the golf course. 'That may depend on those two.' Jim nodded toward a man and woman, each dressed in standard khaki naval uniforms. They had emerged from a dark blue sedan and were walking toward them. 'What do you suppose they want?' Stanton asked. 'They look serious.' 'Don't ask me, I'm just a chaplain, remember?' 'Yeah, well, I've been retired for six months. They can't be here for me.' 'I bet the fine print on your discharge papers says different.' Stanton sighed heavily. Jim was right; he could be recalled back to duty on a moment's notice, but that was unlikely. Only something extremely urgent could trigger such a recall. 'Well, if they're here for either one of us, it can't be good. When they come looking for the chaplain it means something bad has happened.' 'Amen to that,' Jim exclaimed. Neither man moved from the golf cart to meet the two officers, preferring to wait until the last second to find out why the navy had dispatched two of its people to a golf course. 'Excuse me, gentlemen,' the woman said. She had a pleasant round face graced by intelligent brown eyes and short auburn hair. Stanton judged her to be no older than twenty-five. Her lieutenant bars looked as if they had just been taken out of the box that morning. With her was a stocky ensign with a ruddy complexion. He looked even younger. 'I'm sorry to bother you. We are looking for Captain Julius D. Stanton.' Stanton cringed. He hated the name Julius. 'That would be me,' Stanton said without humor. 'That's Captain J. D. Stanton, retired.' 'Yes, sir,' the lieutenant replied. 'I'm Lieutenant Donna Wilcox and this is Ensign Harold McGlidden.' Stanton nodded slightly, but said nothing. 'Sir, been asked to escort you to' 'Perhaps you didn't hear me, Lieutenant,' Stanton interrupted. 'I'm retired. I'm no longer in the navy. Now I play golf three days a week. This is one of those days, and you're burning my daylight.' 'Yes, sir. I understand.' Donna stiffened. 'Nonetheless, sir, my orders are to present you with this.' She held out an envelope. 'I am to escort you to the location specified in that document.' Stanton snatched the envelope from the woman's outstretched hand and quickly opened it, barely noticing the bold words Eyes Only printed on it. It took only a moment for Stanton to examine the paper. 'Is the admiral inviting you to tea?' Walsh asked with a wry smirk. 'Hardly,' Stanton replied solemnly. 'It's an invitation, sure enough. I'm being recalled to active duty.' 'Does it say why?' Walsh inquired sympathetically. 'Not specifically, no.' Donna cleared her throat. 'Excuse me, Captain, but those orders are secret and for your eyes only.' 'I'm aware of that, Lieutenant,' Stanton retorted sharply. He was angry and frustrated by the recall. 'This is Lieutenant Commander Jim Walsh. Please don't insult the chaplain to his face.' 'Yes, sir,' Donna responded. 'No insult was intended. It's just that' 'It's just that you're doing your duty.' Stanton softened his tone. 'I can't fault you for that.' Turning to his brother-in-law, Stanton continued, 'It looks like the game's over, Jim. They're pulling in my leash.' 'I understand. Just as well, I was going to beat you anyway.' 'Not in this lifetime,' Stanton snorted. Addressing Wilcox and McGlidden, Stanton said, 'Very well. Meet me at my home. I'll change into my uniform'