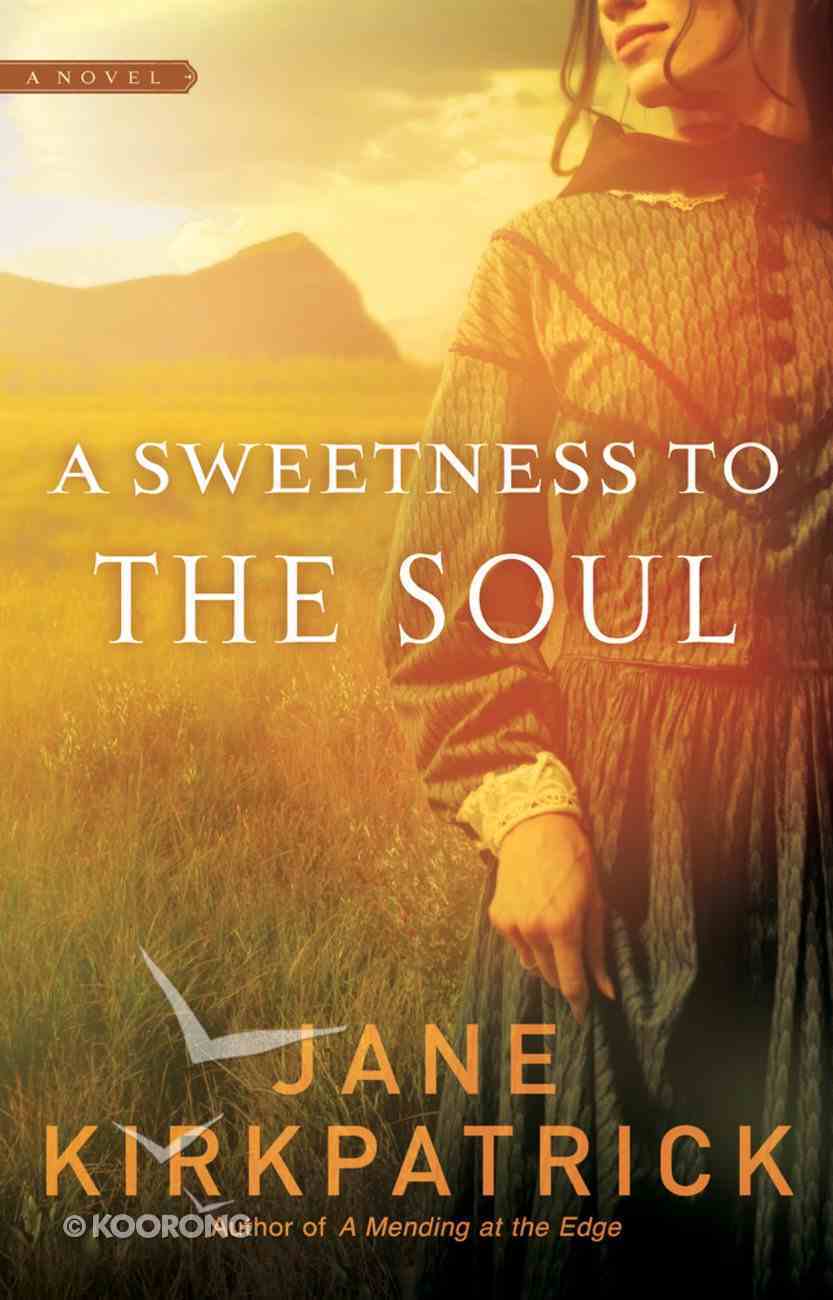 A Sweetness to the Soul (#01 in Dreamcatcher Series)

Based on historical characters and events, A Sweetness to the Soul recounts the captivating story of young, spirited Oregon pioneer Jane Herbert who at the age of twelve faces a tragedy that begins a life-long search for forgiveness and love....

A Sweetness to the Soul
Jane Kirkpatrick
eBook

Based on historical characters and events, A Sweetness to the Soul recounts the captivating story of young, spirited Oregon pioneer Jane Herbert who at the age of twelve faces a tragedy that begins a life-long search for forgiveness and love. In the years that follow, young Jane finds herself involved in an unusual and touching romance with a dreamer sixteen years her senior, struggles to make peace with an emotionally distant mother, and fights to build a family of her own. Filled with heart-warming insight and glimpses of real-life pain, A Sweetness to the Soul paints a brilliant picture of love that conquers all obstacles and offers a powerful testimony to the miracle of God's healing power.

Based on historical characters and events, A Sweetness to the Soul recounts the captivating story of young, spirited Oregon pioneer Jane Herbert who at the age of twelve faces a tragedy that begins a life-long search for forgiveness and love. In the years that follow, young Jane finds herself involved in an unusual and touching romance with a dreamer sixteen years her senior, struggles to make peace with an emotionally distant mother, and fights to build a family of her own. Filled with heart-warming insight and glimpses of real-life pain, A Sweetness to the Soul paints a brilliant picture of love that conquers all obstacles and offers a powerful testimony to the miracle of God's healing power.
-Publisher

For Lovers of History, Romance, and Faith Based on historical characters and events, this 1995 Outstanding Western Novel award winner recounts the captivating story of a young, spirited Oregon pioneer, Jane Herbert. A tragedy at the age of twelve pitches her into a lifelong search for forgiveness and love. Over time, Jane finds herself involved in an unusual and touching romance with a dreamer sixteen years her senior, struggling to make peace with an emotionally distant mother, and fighting to build a family of her own. Filled with heartwarming insight and glimpses of real-life pain, A Sweetness to the Soul paints a brilliant picture of love that conquers all obstacles and offers a powerful testimony to the miracle of God's healing power.
-Publisher

Like the slow rising of the river after an early snow melt in the mountains, he seeped into my life, unhurried, almost without notice, until the strength and breadth of him covered everything that had once been familiar, made it different, new over old. It was the summer after the tragedy. I date everything from that time, but isn’t that often how it is with catastrophes? And I guess, for me, that’s when it all began.

I recall little of our initial encounter, really, though in years since he has told me details enough to make me think I remember it well. But I don’t. At least not his part in it. Lodenma says I was mourning grievous injustices that summer. At twelve, I doubt I’d have used those words, but Lodenma, my lifelong friend, who is still eight years older than I, had three years of marriage beneath her chemise by that year–1861 it was–so knew first hand about grievous injustices.

No, I would have used words such as “smoking mad” or “hotter than a hijacker’s pistol” or just plain “flamin’ furious,” words that fit my frustration with the mules refusing to enter the pole corral that day. That alone told Lodenma I was grieving or mad, for every Oregon Territory child knows mules will not go where there is danger and attempting to force them is a waste of morning victuals. We should all be so wise.

The milling mules’ dust first attracted Mr. Sherar’s attention– that and the smoke from my small cooking fire. From a distance (he is fond of relating) he spied the powdery volcanic dust drifting like mist through the pines and firs and junipers. He wondered what created it. He stopped his horse, pulled his telescope from the saddlebags. Through the glass, he eyed a small boy, he thought, waving his arms while mules bolted on either side of the opening to a corral he could barely see for the dust.

“Surprised me,” he told me later. “Didn’t expect to see anyone so far from settlement, let alone a small boy pushing stock in the shadow of Captain Hood’s mountain. Wasn’t until I rode closer that I saw you were a little bit of a girl. Still are, just a bit of a thing.” He always shakes his head then, eyes atwinkle, and pulls on his grasshay-like beard in wonder, remembering.

That day, I’d pulled my skirt up between my legs and tucked the hem of the homespun into my yarn belt giving me more freedom to move while revealing two bony knees over bare feet.

“But it was your eyes,” he said, “that startled me. So dark, like obsidian globes nestled into white porcelain.” The Indians named them “huckleberry eyes” promising I’d be fruitful, which I guess I’ve been in a way.

Of course, I was flamin’ furious and I suspect my violet eyes, huckleberry or not, were as hard as black marble. And while I vaguely remember seeing a tall man on horseback off the trail holding a brass glass to his eye, I was more concerned with the mules.

Papa had sent me to fetch them. I was to bring the animals into the shady upper corrals, then ride one home. In the morning, he planned to return with me and push the small herd back to winter nearer our cabin named for the place along the Barlow Trail where those bound for Oregon crossed our creek. Fifteen Mile Crossing we lived at, in the valley of the Tygh people. Our old home is less than a day’s ride from this home where we live now, but I have not seen it since the altercation with my mother over Ella all those years ago. It’s funny, the pleasures we deprive ourselves of rather than face our fears.

After several disastrous attempts that morning long ago, I stomped again to the corral gate trying to see what would keep the animals from passing through it, wishing just for the moment that I had a herd of horses to contend with. Horses can be convinced to enter in, so willing are they to give up good sense to loyalty and making humans happy. Not so with mules.

I ran my fingers over the poles worn smooth by animal hides rubbing past; couldn’t find any slivers or thorns or bees. I looked over the ground just inside the gate but saw nothing but a few pine needles scattered like dead grasshoppers in the dust. Nothing I could see in the corral opening should have bothered them. And beyond, the corral was empty, quiet, cool.

Miss Em, the biggest, darkest mule, stood well beyond the circle of poles, but had not run off. It was as though she wanted to go in but something kept her out. Not unlike some people, I suppose.

“Come on,” I pleaded, walking toward her, my palm open in begging. I was getting hungry and she was usually easily caught up. I thought I might tie her to the railing and then gather others up one by one and lead them through. But that day Miss Em jerked back, twisted and bucked her head, kicked out at the hot noon air, snorted, then burst toward an abrupt stop just beyond the gate. Dust spattered like buckshot into the still fall air.

I started around her to herd all seven of them up and try once more to yell them through the gate when I saw movement from the corner of my eye. Just the glimmer of movement, near the center of the corral, almost like a bird’s shadow or like the seepage of water from a leather bag left lying in the dirt. But there was no bird, no bag. And no water in the dirt.

I turned slowly. The movement increased, in several directions now, the ooze taking on familiar shape and multiplying. More than one. A den of them, in fact, writhing and turning over each other in the dirt just beyond the gate, making the dust move ever so slowly like the beginnings of an avalanche of snow. The movement formed into diamonds of brown and white and then I recognized them and their hiss.

Their presence incensed me, left me with an exaggerated sense of outrage, of invasion, that they should be there, in my corral. Childish fury propelled me toward revenge.

Charging to the fire, I grabbed a limb with flames burning at the end, then jerked the kerosene lamp I’d set quietly beside a sitting log. I gave no thought to the danger. I spun toward the reptile pile, sprayed the kerosene from the lamp over the writhing forms, and dropped the flaming stick.

Rattlesnakes never bothered me after that. At least not the legless kind.

The stench and the black smoke it billowed up into, the braying and snorting of mules, and the scorch of heat at my feet and my face are my strongest memories of that day, not that moments later I met the man sixteen years older than myself who had been staring at me from a distance and whom in less than twenty-four months I’d marry.