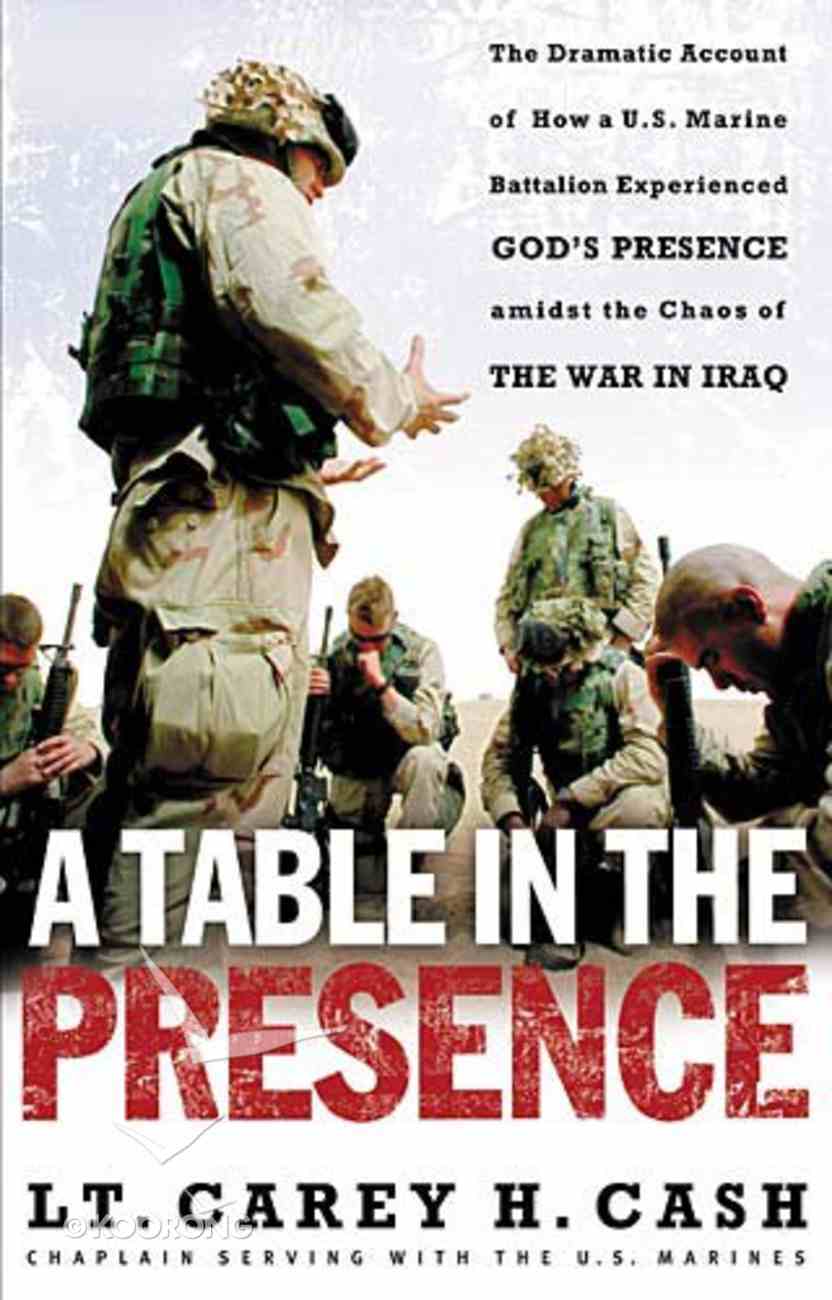 A Table in the Presence

In the Presence of My Enemies
Gracia Burnham
eBook

A powerful, firsthand account, by Marine Chaplain Carey Cash, of how God worked, often miraculously, amongst the men of the 1st Battalion, 5th Marine Regiment in Iraq.

On April 10th, 2003, the 1st Battalion, 5th Marine Regiment, faced with the task of seizing the presidential palace in downtown Baghdad, ran headlong into what Lieutenant Colonel Oliver North called, "the worst day of fighting for U.S. Marines." Hiding in buildings and mosques, wearing civilian clothes, and spread out for over a mile, Saddam Hussein's militants rained down bullets and rocket propelled grenades on the 1st Battalion. But when the smoke of the eight-hour battle cleared, only one Marine had lost his life. Some said the 1st Battalion was incredibly lucky. But in the hearts and minds of the Marines who were there, there was no question. God had brought them miraculously through that battle.

As the 1st Battalion's chaplain, Lieutenant Carey Cash had the unique privilege of seeing firsthand, from the beginning of the war to the end, how God miraculously delivered, and even transformed, the lives of the men of the 1st Battalion. Their regiment, the most highly decorated regiment in the history of the Marines, was the first ground force to cross the border into Iraq, the first to see one of their own killed in battle, and they were the unit to fight what most believe to have been the decisive battle of the war - April 10th in downtown Baghdad. Through it all, Carey Cash says, the presence of God was undeniable. Cash even had the privilege of baptizing fifty-seven new Christians - Marines and Sailors - during the war in Iraq.

The men of the 1st Battalion came to discover what King David had discovered long ago - that God's presence could be richly experienced even in the presence of enemies. Here is the amazing story of their experience.

There are Some Places Where you Just Don't Expect to Find God. For the men of the 1st Battalion, 5th Marine Regiment, downtown Baghdad was one of those places. Moving deeper into the heart of Iraq to seize control of the presidential palace, they found themselves face to face with the Iraqi Republican Guard and Fedayeen militia-an enemy who used civilians for human shields; an enemy who attacked from mosques, schools, and hospitals; an enemy who, under the command of Saddam Hussein, raped its own people and threatened its own recruits with their families' lives if they turned from battle. This was no place for God; this was enemy territory. But when the smoke settled, God's footprints were clearly visible. Serving as a chaplain to U.S. Marines, Lieutenant Carey Cash had witnessed the miracles that began months earlier with a spiritual revival in the desert of Northern Kuwait, culminating April 10, 2003, in one of the fiercest battles of Operation Iraqi Freedom. With vivid detail and gripping emotion, Lieutenant Cash gives a firsthand account of this amazing story-how the men of an entire battalion found God in the presence of their enemies.
-Publisher

As a chaplain to the Marines, Lieutenant Carey Cash heard the muttered prayers for courage from the thousand-plus men of the "Fightin' Fifth," the first ground force to cross Iraqi borders during Operation Iraqi Freedom. He also heard their tear-filled prayers when one of their most beloved leaders became the war's first American casualty. But more than anything, he heard prayers for protection, whispered by each Marine as the battalion moved into the presence of enemies. On April 10, 2003, the 1st Battalion, 5th Marine Regiment marched into downtown Baghdad to seize Saddam Hussein's presidential palace, only to find themselves ambushed by militants hiding in mosques, storefronts, and homes. Hundreds of troops were caught face to face with a blitz of rocket-propelled grenades (RPGs), gunfire, and sure defeat. Yet their reports tell a different story: a rocket splicing its way through an armored vehicle packed with Marines hits no one; a Marine finds a bullet's entrance and exit holes in his helmet, yet he has no injury; a squad of Marines watch in amazement as their enemies prepare to fire from point-blank range, then pause and drop their weapons, running away in terror; an RPG, fired from only a few yards away, inexplicably swerves and misses its intended target. When the smoke of the April 10th battle cleared, only one American had lost his life. Not one Marine could deny God's protection, not only on this day but in the months that led up to this moment as well. From a spiritual revival in the desert of Northern Kuwait, to miraculous escapes from death, to baptizing a Marine in Saddam Hussein's palace, Lieutenant Cash recounts the remarkable events of this powerful story of God's faithfulness. Book jacket.
-Publisher

Cash, Chaplain, United States Navy, is a battalion chaplain to infantry Marines based at Camp Pendleton, California. In Operation Iraqi Freedom, his unit was the first ground combat force to cross the border into Iraq. He is a graduate of Southwestern Baptist Theological Seminary and was commissioned as a chaplain in 1999.