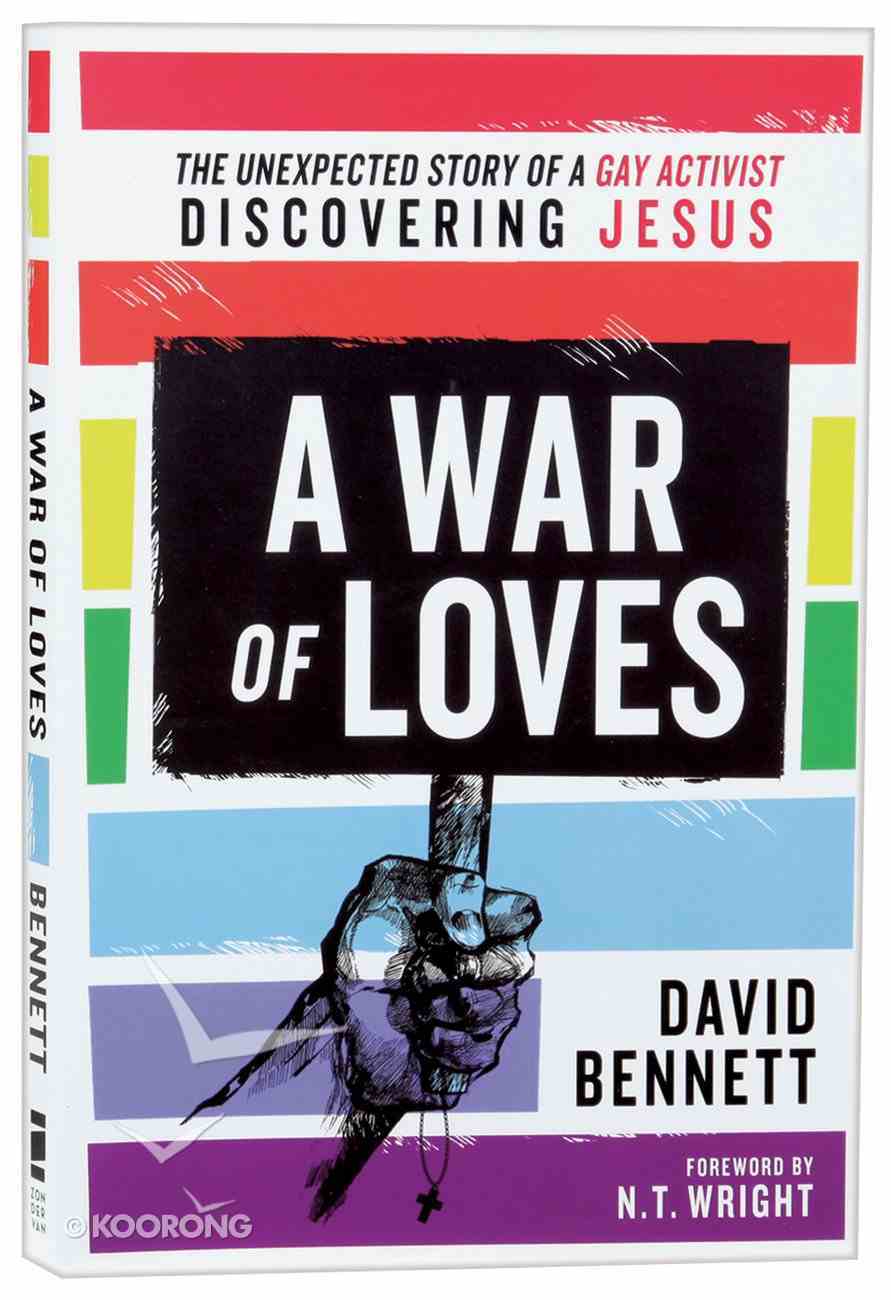 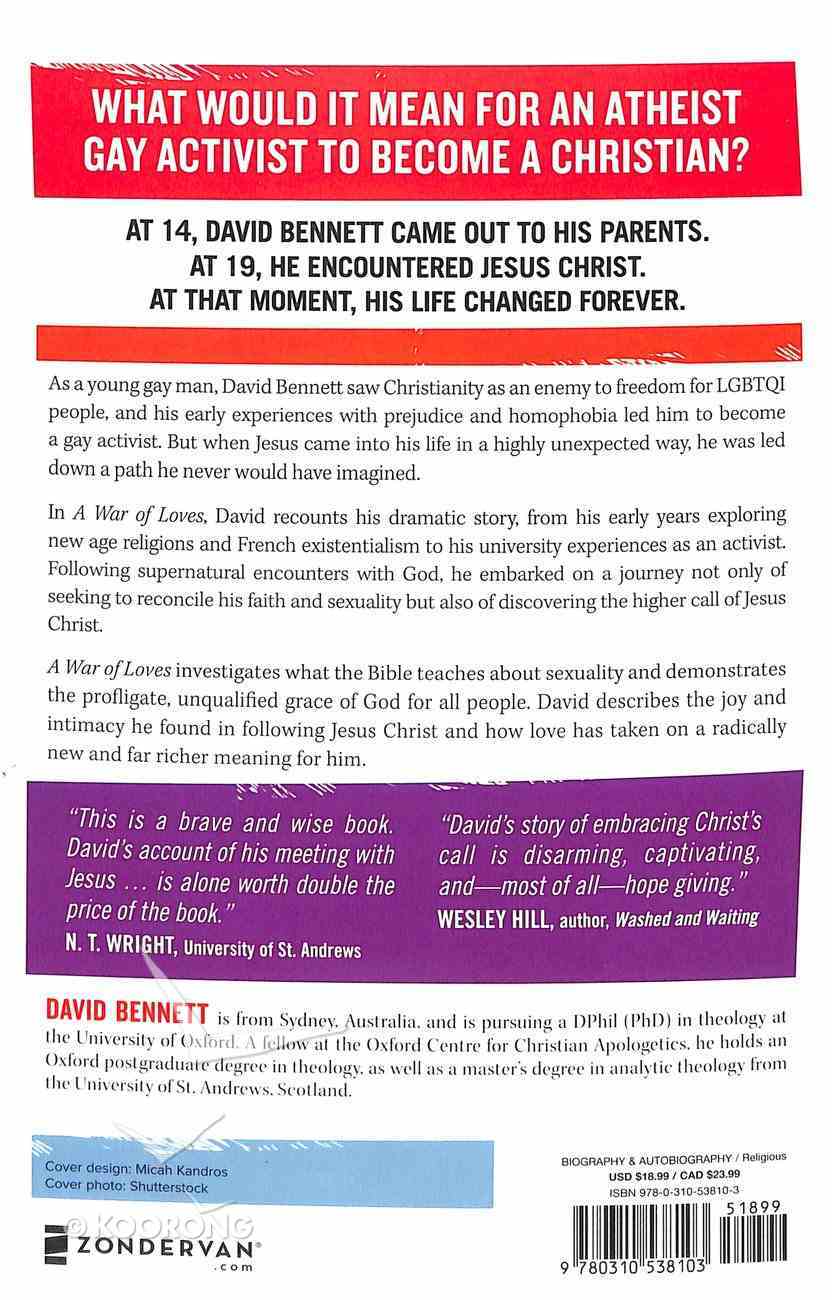 A War of Loves: The Unexpected Story of a Gay Activist Discovering Jesus

36 available
Expected to ship on Monday from Australia.
Learn More
Free Shipping
for orders over $99.

It's All About Jesus Bible Storybook
Heath McPherson
Padded Hardback

At 14, David Bennett came out to his parents.
At 19, he encountered Jesus Christ.
At that moment, his life changed forever.

David Bennett came out to his parents as gay when he was fourteen and entered Sydney's active gay community a few years later. In A War of Loves, he shares his growing desire as a gay rights activist to see justice for LGBTQI people, his journey through new age religions and French existentialism, and his university years as a postmodernist - before Jesus Christ showed up in his life in a highly unexpected way, leading him down a path he never would have imagined or predicted.

David had believed he was disqualified from God's love until he encountered that for himself in Jesus Christ. In A War of Loves, he recounts his dramatic story, investigates what the Bible teaches about sexuality, and above all demonstrates the profligate, unqualified grace of God.

"This is a brave and wise book. David's account of his meeting with Jesus ... is alone worth double the price of the book."
- N.T. Wright, University of St. Andrews

"Imagine a gay comedian like Stephen Fry writing a conversion memoir like C. S. Lewis' Surprised by Joy or Sheldon Vanauken's A Severe Mercy, and you'll have some idea of the laughter and the tears that await you in these exuberant, aching, Jesus-obsessed pages. David Bennett has found that, far from eliminating his love for men, Christ's call to take up his cross and follow the path of celibacy has led him deeper into love. David's story of embracing that call is disarming, captivating, and - most of all - hope-giving."
- Wesley Hill, author of Washed and Waiting: Reflections on Christian Faithfulness and Homosexuality

"Reading David Bennett's A War of Loves is like reading someone's diary. This is an incredibly raw and authentic book! I absolutely love the way David draws you into his life and makes you feel like you're walking right beside him as he wrestles with his faith and sexuality. In the end, David paints a beautiful and compelling picture of what it looks like to desire Christ above all else. His affections for Jesus make me excited to be a Christian."
- Preston Sprinkle, President of The Center for Faith, Sexuality & Gender

"With humour and vulnerability David Bennett shares his incredible story of encountering God in unlikely circumstances. His page turning writing kept me gripped from beginning to end and I feel sure that his unique perspective on what it means to give our sexuality to God is something that every Christian of our generation needs to consider."
- Dr. Amy Orr-Ewing Director, The Oxford Centre for Christian Apologetics

"A War Of Loves is a refreshing and powerful book. With deep compassion and unrelenting honesty, David shares his story of leaving gay activism and following Jesus. This is one of the top books I will now recommend to Christians who want to know how to better love their LGBTQI friends and also for seekers-whether gay or not-who are open to considering the invitation of Jesus. My thanks to David for his courage to write this book."
- Sean McDowell, Ph.D. is a Biola University Professor, Speaker, and author or co-author of over 18 books including Evidence that Demands a Verdict and Same-Sex Marriage

"David Bennett is the real deal: passionate, kind, courageous and thoughtful. His encounter with Jesus Christ, described so powerfully in this book, is deeply moving and I particularly value the gentleness and graciousness of his tone towards those who disagree with his views. Here is a voice, as counter-cultural as it is compelling, capable of engaging the whole Christian community, whether gay or straight in a vital debate. I have no doubt that David Bennet's story is going to become an essential part in a complex jigsaw for many."
- Pete Greig, 24-7 Prayer International and Emmaus Rd, Guildford.

"A timely, thoughtful and often moving story, which will be hugely helpful to a lot of people. David's honesty and humanity shine through these pages, even as he handles very difficult questions through the lens of his own experience. This is a gift to the contemporary Church."
- Andrew Wilson, teaching pastor, King's Church London

"A War of Loves is a brutally honest book about the life and struggle of a friend of mine, David Bennett. He gives the precious gift of a look inside a life-long battle and journey that has found Christ in the midst of a sexually confusing fallen world. He is honest about what he thought and what he thinks. He tells about how God drew him to faith through the compassionate care of other believers. This book is designed to make all of us think about our ultimate love and to work through how we should engage in a long debated area, whether inside the church or outside of it. It is well worth the read."
- Darrell L. Bock, Senior Research Professor of New Testament Studies, Dallas Theological Seminary

"One of the most significant books, on one of the Church's most pressing subjects, by one of today's most inspiring young thought leaders. This is a costly but kind call to radical discipleship; to faithful following of Jesus on his terms; to a relinquishing of desires and demands; to losing oneself but ultimately to find oneself alive in the love of Jesus. David Bennett is a prophetic witness, a truth teller, a tender pastor and a faithful follower of Jesus. This generation needs to hear this man."
- Rev. Simon Ponsonby, Author and Pastor of Theology, St Aldates Church, Oxford

"Riveting, extraordinary - quite extraordinary! I've never read anything like it and I feel that perhaps in 100 years' time this autobiography will be a set text for our age. David puts you at his side and, as you accompany him through his journey, you feel the emotional punch of his unbelief, his anger, his family life and his youth, his days as a Gay Activist, his love of the arts, and his overwhelming and radical encounter with the Living God. I really think I could give this to any contact I have and they'll be fascinated. I do wonder whether this book will be a Christian classic of our time."
- Rico Tice, All Souls Church London & Christianity Explored

"The Church of England House of Bishops' work towards its teaching document, 'Living in Love and Faith: Christian Teaching and Learning about Human Identity, Sexuality and Marriage', is drawing on a wide range of voices and experiences. David Bennett's book presents a particular lived Christian experience which deserves hearing alongside others."
- Sentamu Eboracensis, Archbishop of York

"A spiritual biography in the tradition of Lewis' Surprised by Joy, David Bennett's A War of Loves is the searingly honest story of one romanced by God against all expectations. Bennett's example of giving his whole self, including his sexual self, to the Christ who died for him is an act of Christian witness for our times."
- Rev Dr Michael P Jensen, Rector St Mark's Darling Point, Sydney, and author of Martyrdom and Identity: The Self on Trial

"The 'War of Loves' described in this brilliant book is one faced by many today and several in the church community I serve. David Bennett's journey from Australian agnosticism and gay activism through French existentialism into faith in Christ makes for a fascinating read. In addition, I believe he speaks with a compassion and care for the LGBTQI community that is challenging to many evangelicals and timely for all.

I share with David a love of France and all things French so I am particularly pleased to commend this book. David is a passionate lover of people: anything written by him is likely to resonate with enthusiasm. But much more than mere enthusiasm, this is an important contribution to the conversation that needs to be heard.

In a day when so often 'emotional story trumps thinking', David Bennett matches careful theological thinking with a truly compelling story."
- Charlie Cleverly, Rector of St Aldates Oxford and member of the General Synod of the Church of England

"Many lesbian, gay and bisexual people feel that they cannot be true to both their sexuality and the Christian faith. By sharing deeply from his own story, David demonstrates that integrity and authenticity is possible for gay Christians, as well as sharing some beautiful insights about love, friendship and following Jesus too. David's experience of God at work in his life resonated with my experience in a way that I found moving and inspiring. As well as being relevant for gay and bisexual Christians and those who want to explore the Christian faith, A War of Loves will be helpful for church leaders who want to gain a deeper understanding of how to welcome and support LGB people in their churches."
- Revd Dr Sean Doherty, Christian ethicist, author of The Only Way is Ethics

:
David Bennett came out to his parents as gay when he was fourteen and entered Sydney's active gay community a few years later. In A War of Loves, he shares his growing desire as a gay rights activist to see justice for LGBTQI people, his journey through new age religions and French existentialism, and his university years as a postmodernist--before Jesus Christ showed up in his life in a highly unexpected way, leading him down a path he never would have imagined or predicted.


David had believed he was disqualified from God's love until he encountered that for himself in Jesus Christ. In A War of Loves, he recounts his dramatic story, investigates what the Bible teaches about sexuality, and above all demonstrates the profligate, unqualified grace of God.

In Search of the Common Good: Christian Fidelity in a Fractured World
Jake Meador
Hardback