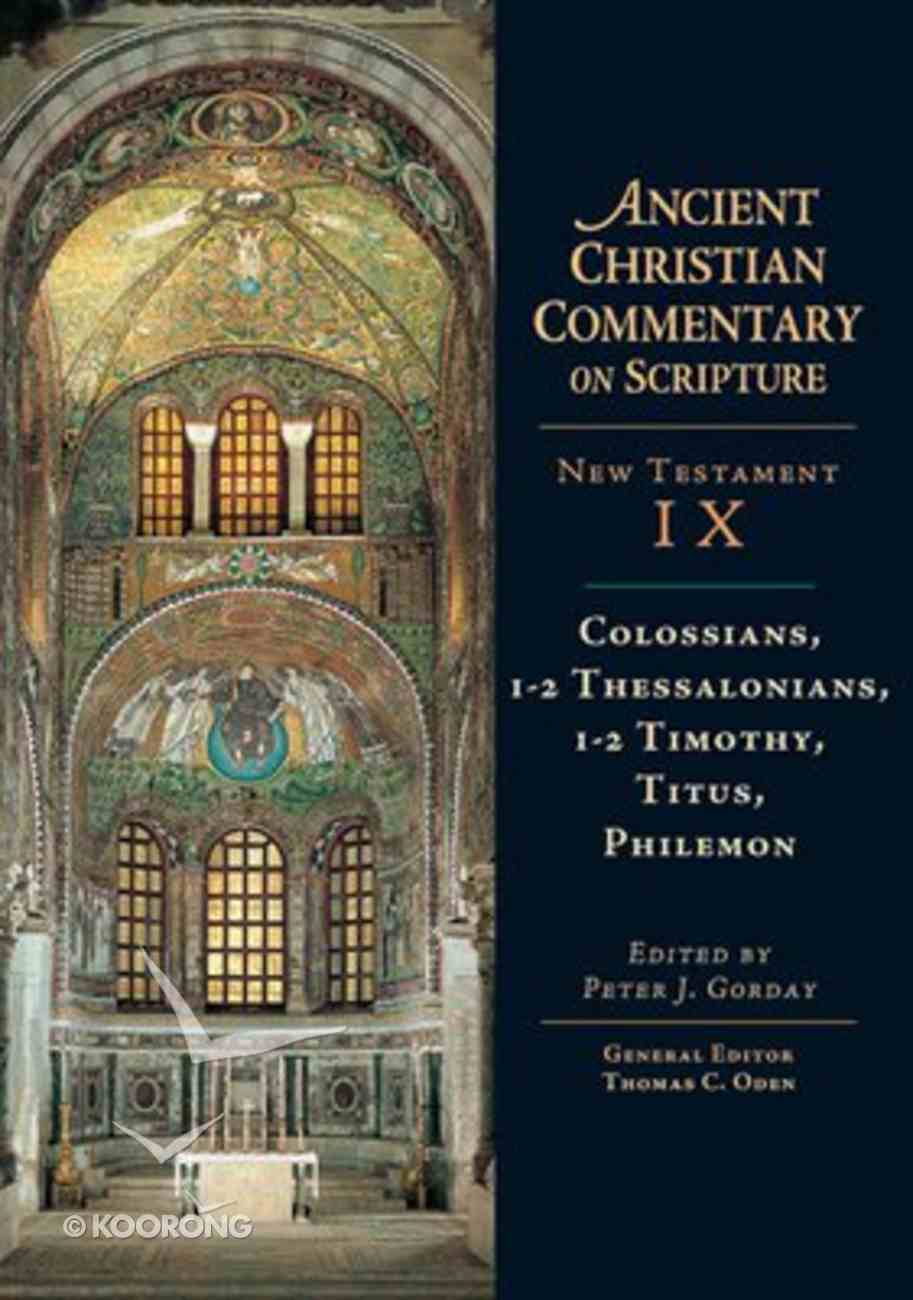 New to the Ancient Christian Commentary on Scripture. This unique series makes accessible to contemporary readers key writings of the early church fathers, with the verse-by-verse comments of Augustine, Jerome, Pelagius, and others---some appearing here in English translation for the first time.
-Publisher

A 2001Christianity TodayBook of the Year!While patristic commentary on St. Paul's shorter letters--Colossians, 1-2 Thessalonians, the Pastorals and Philemon--was not so extensive as that on his longer letters, certain passages in these letters proved particularly important in doctrinal disputes and practical church matters. Pivotal in controversies with the Arians and the Gnostics, the most commented-upon christological text amid these letters was Colossians 1:15-20, where Jesus is declared "the image of the invisible God, the firstborn of all creation." In other texts scattered throughout the Pastorals, the fathers found ample support for the divinity of the Son and the Spirit and for the full union of humanity and divinity in the one redeemer, the "one mediator between God and men, the man Christ Jesus" (1 Timothy 2:5). These early Christian commentators also looked to the Pastorals, where Pauline authorship was assumed, for important ethical and moral teaching, as well as explicit qualifications for choosing church leaders and guidelines for overseeing the work and behavior of widows.Chief among the Eastern commentators and widely excerpted throughout this volume is John Chrysostom, praised for his pastoral insight and shrewd, generous empathy with the apostle Paul. Other Greek commentators whose works are cited include Theodoret of Cyr, Theodore of Mopsuestia, Severian of Gabala, Ignatius of Antioch, Justin Martyr, Irenaeus, Clement of Alexandria, Athanasius, Basil the Great, Gregory of Nazianzus and Gregory of Nyssa. Among Western commentators Augustine dominates. His work is joined by that of Ambrosiaster, Pelagius, Jerome, Hippolytus, Tertullian, Novatian, Cyprian of Carthage, Hilary of Poitiers and Ambrose, among others. Of particular interest for their ascetical and devotional insight are works from Syrian and Egyptian churches, including Aphrahat, Ephrem the Syrian, Isaac of Nineveh and Philoxenus of Mabbug.This volume opens up a treasure house of ancient wisdom that allows these faithful witnesses, some appearing here in English translation for the first time, to speak with eloquence and intellectual acumen to the church today.
-Publisher