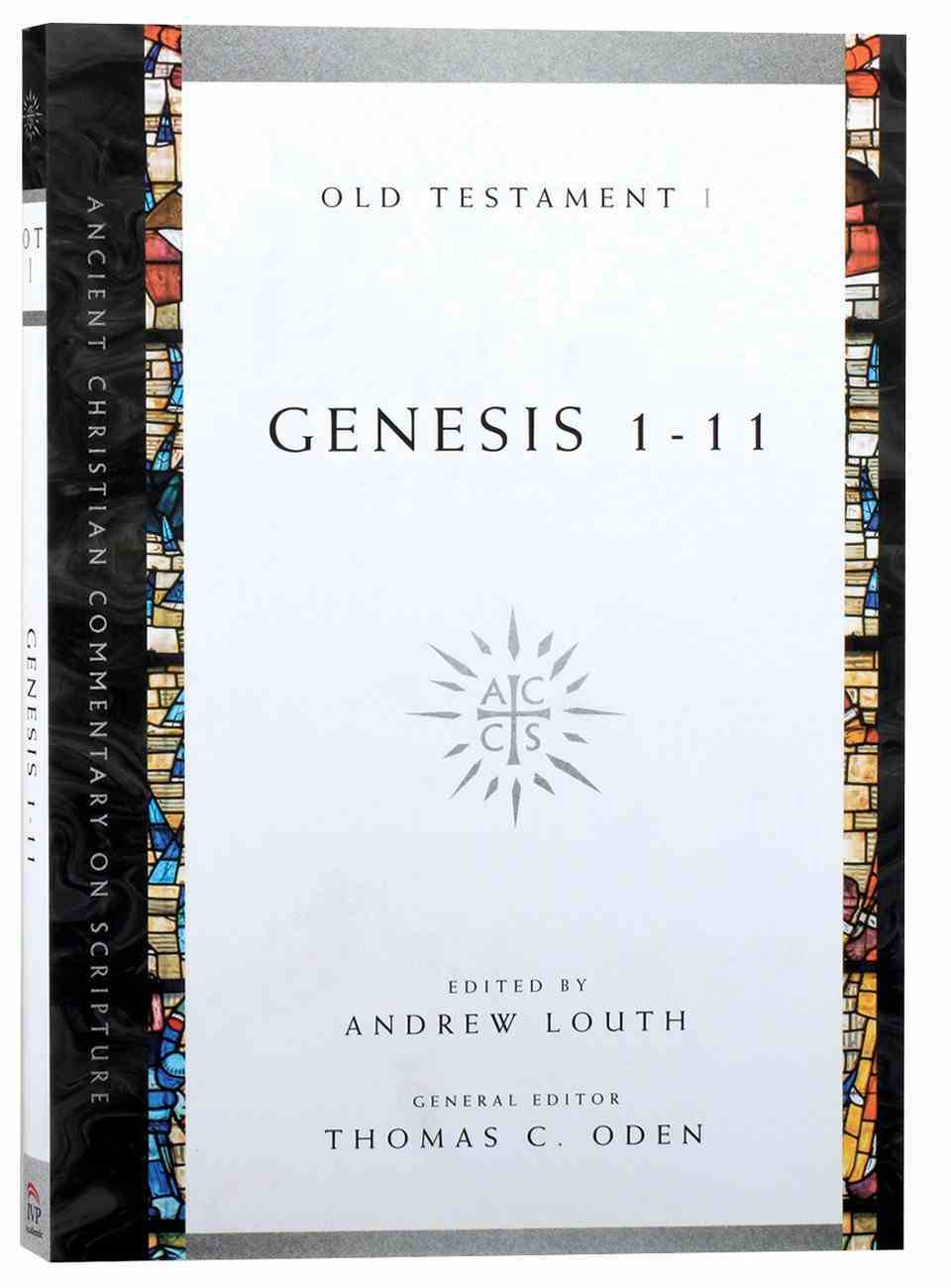 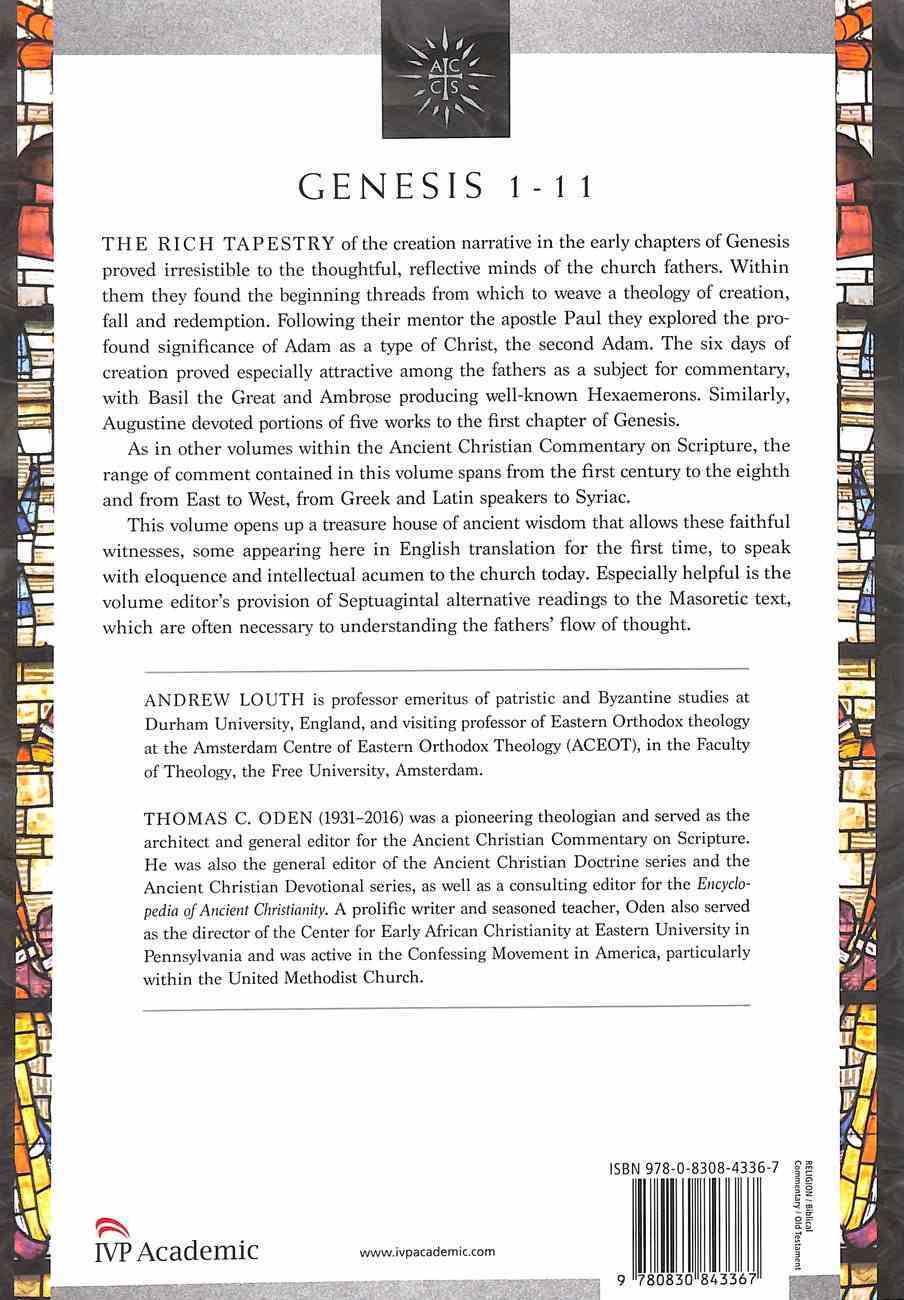 The rich tapestry of the creation narrative in the early chapters of Genesis proved irresistible to the thoughtful, reflective minds of the church fathers. Within them they found the beginning threads from which to weave a theology of creation, fall...

The rich tapestry of the creation narrative in the early chapters of Genesis proved irresistible to the thoughtful, reflective minds of the church fathers. Within them they found the beginning threads from which to weave a theology of creation, fall and redemption. Following their mentor, the apostle Paul, they explored the profound significance of Adam as a type of Christ, the second Adam.

The six days of creation proved especially attractive among the fathers as a subject for commentary, with Basil the Great and Ambrose producing well-known Hexaemerons. Similarly, Augustine devoted portions of five works to the first chapter of Genesis.

As in previous volumes within the Ancient Christian Commentary on Scripture, the range of comment contained in Genesis 1--11 spans from the first century to the eighth, from East to West, and from Greek and Latin speakers to Syriac. Especially helpful in this volume is editor Andrew Louth's supply of Septuagintal alternative readings to the Masoretic text, which are often necessary to understanding the fathers' flow of thought.

Genesis 1--11 opens up a treasure house of ancient wisdom--allowing these faithful witnesses, some appearing here in English translation for the first time, to speak with eloquence and intellectual acumen to the church today.

"All who are interested in the interpretation of the Bible will welcome the forthcoming multivolume series Ancient Christian Commentary on Scripture. Here the insights of scores of early church fathers will be assembled and made readily available for significant passages throughout the Bible and the Apocrypha. It is hard to think of a more worthy ecumenical project to be undertaken by InterVarsity Press." Bruce M. Metzger, professor emeritus of New Testament, Princeton Theological Seminary

"For those who think that church history began around 1941, when their pastor was born, this commentary will be a great surprise. Christians throughout the centuries have read the biblical text and nursed their spirits with it and then applied it to their lives. These commentaries reflect that the witness of the Holy Spirit was present in his church throughout the centuries. As a result, we can profit by allowing the ancient Christians to speak to us today." Haddon Robinson, Harold John Ockenga Distinguished Professor of Preaching, Gordon-Conwell Theological Seminary

"There is no shortage of new books on the market and it may be a surprise to some to see IVP producing the Ancient Christian Commentary on Scripture series. But, bearing in mind C. S. Lewis's admonition, 'It is a good rule, after reading a new book, never to allow yourself another new one till you have read an old one in between,' this series will fill a great need that many of us may not even be aware of--the need to read those who have gone before us." D. Stuart Briscoe

"We speak abstractly in scholarly circles of the need to transcend looking at Christianity through the spectrum of modern presuppositions. This series, based on the commentaries of early Christians, gives us a concrete way to do this. It's a great idea." Don S. Browning, Alexander Campbell Professor of Ethics and Social Sciences, The Divinity School, University of Chicago

Dr Andrew Louth is Professor of Patristic and Byzantine Studies, University of Durham, and General Editor (with Gillian Clark) of Oxford Early Christian Studies. He is the author of Denys the Areopagite, St John Damascene tradition and originality in Byzantine theology, Greek east and Latin west the church AD 681-1071 and most recently Love.