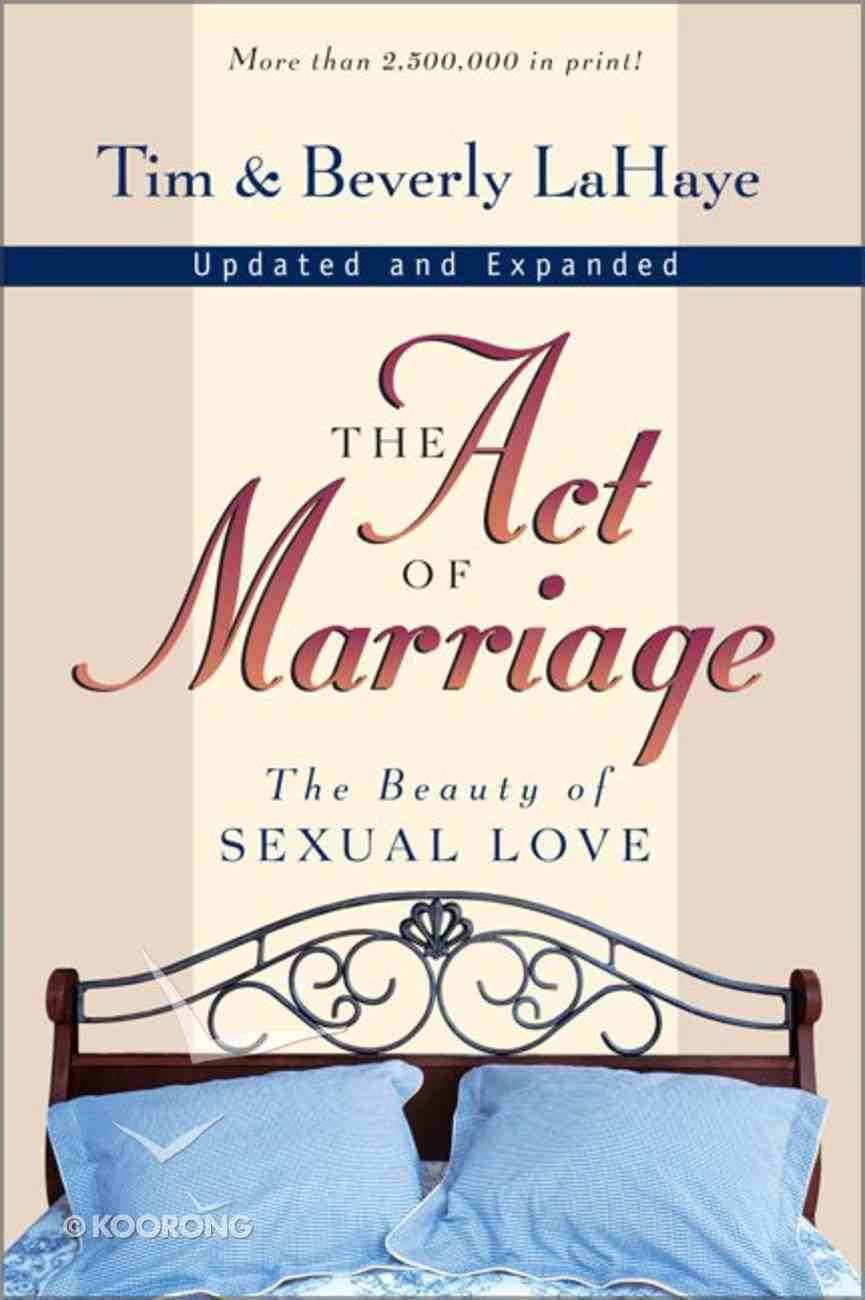 Act of Marriage the

With over 2.5 million copies sold since its release in 1976, The Act of Marriage has helped Christian couples around the world discover new joy and sexual fulfillment in marriage. This new edition expands on topics previously only touched on...

With over 2.5 million copies sold since its release in 1976, The Act of Marriage has helped Christian couples around the world discover new joy and sexual fulfillment in marriage. This new edition expands on topics previously only touched on and includes updates on the latest findings in medicine and social science. It offers biblical principles, goals, guidelines, and charts to help couples enrich their physical relationship.
-Publisher

This updated and expanded edition expands some of the subjects that were discreetly touched on in the earlier edition, explores how the latest discoveries in the field of medicine and social practice confirm the principles taught in the book.
-Publisher

Introduction This book is unlike any other I have ever written. It should be read only by married couples, those immediately contemplating marriage, and those who counsel married couples. It is deliberately frank. I have long felt a need for a clear and detailed presentation of the intimate relationship that exists between a husband and wife. Most Christian books on this subject skirt the real issues and leave too much to the imagination; such evasiveness is not adequately instructive. Secular books, on the other hand, often go overboard telling it like it is in crude language repulsive to those who need help. In addition, such books usually advocate practices considered improper by biblical standards. To keep the facts that every couple needs to know from being offensive, I am writing this book with the help of Beverly, my wife of fifty years. In addition to the delicate sense of balance she brings to this work, I have drawn on her extensive counseling experiences as a minister's wife, conference speaker, and registrar of Christian Heritage College. Both of us have counseled enough married couples to convince us that an enormous number of them are not enjoying all the blessings of which they are capable or for which God has designed them. We have discovered that many others find the intimacies of married love distasteful and unpleasant. Through the years, we have developed several teaching principles that have helped such people in a relatively short period of time. The requests of counselors, pastors, and others persuaded us that these same principles could help thousands of people if presented in book form. Before we had had time to begin the project, Dr. Robert K. DeVries, then executive vice president of Zondervan Publishing House, invited us to lunch to present us with the first printed copy of my previous book, How to Win Over Depression. 'A book that is sorely needed today, written by a Christian couple, would concern sexual adjustment in marriage,' he remarked, 'and we would like to ask you two to write it.' We thanked him and promised to pray about it. At first Bev was reluctant to get heavily involved with the endeavor until the Lord gave her a specific sign. Within the next two months she counseled at least ten wives who were averse to sexual intercourse. The success those women soon achieved in their love lives convinced her that God required her active participation in the project. As we began to read current literature on the subject, convinced that God meant lovemaking to be enjoyed by both partners, we prayed that He would lead us to make this work fully biblical and highly practical. He provided many counseling illustrations and pertinent suggestions from pastors, doctors, and friends, among them Dr. Ed Wheat, a family physician who has prepared a superb series of lectures on the subject. When we met him at our Family Life Seminar in Tulsa, Oklahoma, he presented us with a complete set of his cassettes and graciously offered us the freedom to use anything in them. We recommend these cassettes to every married couple and those planning to be married in the near future; they are unquestionably the finest we have ever reviewed. In fact, Dr. Wheat includes information in them that we have not found in the fifty or more books we have scrutinized on this subject. Inasmuch as most of the people we counsel are Christians, we concluded through our reading that Christians generally experience a higher degree of sexual enjoyment than non-Christians. However, there was no way to prove our assumption. We then prepared an intimate survey for married couples and offered it to those who have attended our Family Life Seminars. By comparing the responses with those of secular sex surveys, our conclusions were confirmed and other interesting and valuable facts were discovered. The results of our survey appear in chapter 13, and parts of it are scattered through the book. While we were writing the last chapter of this book, Redbook magazine published a Sexual Pleasure Survey showing the preferences of 100,000 women. The survey was taken by the magazine and written by Robert J. Levin (coauthor with Masters and Johnson of The Pleasure Bond). The most significant finding of Redbook's survey and the one listed first was that 'sexual satisfaction is related significantly to religious belief. With notable consistency, the greater the intensity of a woman's religious convictions, the likelier she is to be highly satisfied with the sexual pleasures of marriage.' Naturally we were delighted to find that Redbook's survey revealed results quite similar to those of our survey. On the strength of his research Mr. Levin emphatically confirmed that 'strongly religious women (over 25) seem to be more responsive . . . [and] she is more likely than the nonreligious woman to be orgasmic almost every time she engages in sex.' This further convinces us that our presupposition is accurate. No single book by human beings will ever become the last word on any subject; therefore we don't claim this manual on married love to be final. But we do believe it contains much valuable information helpful to almost any married couple, and several of its insights are not currently found in any other book of its kind. We therefore send it out with our prayers that God will use it to enrich both the love and the love lives of those who read it.