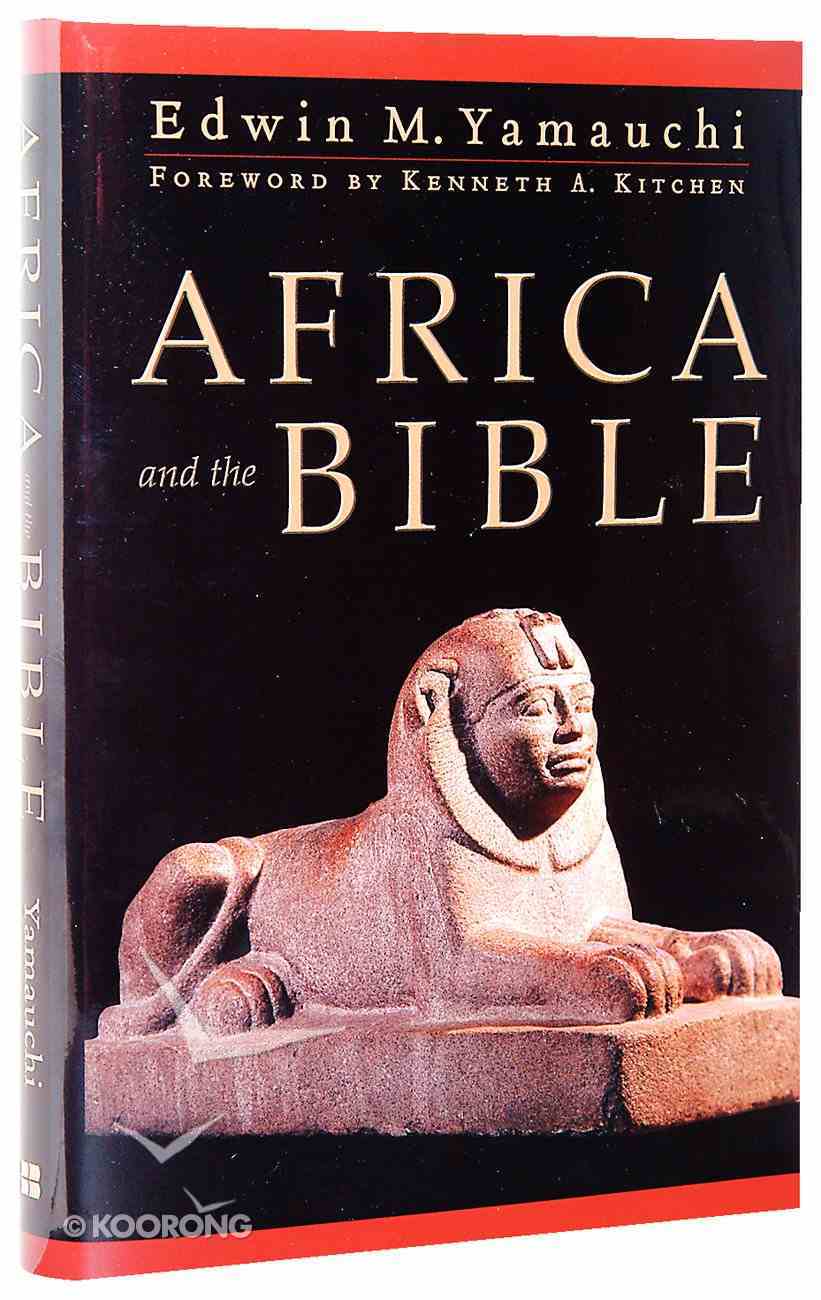 Africa and the Bible

Two hundred years ago, the "curse of Ham" was used to legitimize slavery. Both Ethiopians and Arabians claim the queen of Sheba. Could Moses and Jesus have been black? Much has been said about the connection between Africa and the...

Extraordinary Women of Christian History: What We Can Learn From Their Struggles and Triumphs
Ruth A Tucker
Paperback

Every Leaf, Line, and Letter: Evangelicals and the Bible From the 1730S to the Present
Timothy Larsen
Paperback

Two hundred years ago, the "curse of Ham" was used to legitimize slavery. Both Ethiopians and Arabians claim the queen of Sheba. Could Moses and Jesus have been black? Much has been said about the connection between Africa and the Bible. Unfortunately, despite numerous references to Africa and Africans in the Bible, most scholarly works exploring ancient Africa ignore biblical references. On the other hand, contemporary afrocentric biblical studies often ignore the wealth of archaeological discoveries and historical discussions bearing on the subject. With Africa and the Bible, well-respected scholar Edwin Yamauchi fills these voids, offering a scholarly interpretation that integrates biblical exegesis, archaeological evidence, and recent historical discussions.

AFRICA AND THE BIBLE explores the historical and archaeological background of biblical texts that deal with Africa and the Bible, examines the exegesis of these texts, and traces the ramifications of later interpretations and misinterpretations of these texts. Yamauchi deals with such topics as the curse of Ham's son Canaan, Moses' Cushite wife, the Ethiopian eunuch, Simon the Cyrene, and afrocentric biblical interpretation. Along the way he dispels myths, interacts with current theories, and provides sound judgments as to what the Bible does and does not say.

Students and scholars of the Bible, African studies, and global Christianity will appreciate the extra features Yamauchi employs. He includes photographs, maps, charts, an appendix critiquing Martin Bernal's Black Athena, and Scripture, author, and subject indexes. An extensive bibliography of more than 300 entries will guide readers to the diverse literature associated with the connections between Africa and the Bible. Lay readers interested in history and the Bible will enjoy the book's insightful comments and accessible style.

Author Information: Edwin M. Yamauchi (Ph.D., Brandeis University) is professor of history at Miami University, Ohio. He is the author or editor of numerous books, including Persia and the Bible, Greece and Babylon, The Archaeology of New Testament Cities in Asia Minor, and Harper's World of the New Testament. A co-edited work, Peoples of the Old Testament World, won a Biblical Archaeological Society Award. He has recently edited Africa and Africans in Antiquity.

Endorsements: "In recent years, the academic world and the general public have become interested in the role played by Africa in biblical history. Edwin Yamauchi has provided a valuable service with his book Africa and the Bible. Too many unqualified people have produced popular works on this subject that lack academic credibility. Yamauchi has carefully and thoroughly investigated every possible reference to Africa and Africans in the Bible, deftly synthesizing a massive amount of information and scholarly literature to produce a very useful study."--James K. Hoffmeier, professor of Old Testament and Near Eastern history and archaeology, Trinity International University

"Sensitive both to Afrocentric interests and to data from ancient Egypt and elsewhere, this work reveals, as his works always do, Professor Yamauchi's brilliant multidisciplinary competence. He interacts respectfully with different views, and even those who disagree with some elements of his approach or would welcome an even fuller exploration of some issues will find the book a rich treasure of resources. Few readers of the Bible have had access to the information he provides about Nubia and the Nubian Pharaohs of Egypt."--Craig Keener, professor of New Testament, Eastern Baptist Theological Seminary

"In the midst of the confusion of postmodern political correctness, Yamauchi, with characteristic painstaking documentation, debunks both the arrogance of long-standing Eurocentrism and the mythology of more recent Afrocentrism. With irenic spirit and incisive penetration, he leaves no stones unturned in detailing the connections between the Bible and African civilizations. Both informative and challenging to deep-seated prejudices, this book is must reading for anyone who desires a fair and accurate understanding of the important issues it addresses."--Eugene H. Merrill, Distinguished Professor of Old Testament Studies, Dallas Theological Seminary

"Yamauchi's new book on Africa and the Bible is a very welcome contribution. By focusing on ancient Africa, he explores a topic that seldom gets attention beyond a more programmatic rhetoric in the current boom of books addressing the relationship between Africa and the Bible. Yamauchi is able to combine an extraordinarily wide historical scholarship with a conscious and sensitive approach to contemporary concepts of 'Africa.' And his balanced interpretation of the ancient sources, fair assessment of previous scholarship, and vast bibliography make the book not only an important research contribution but also a most valuable handbook for students and scholars in the field."--Knut Holter, professor of Old Testament, School of Mission and Theology, Stavanger, Norway

"Africa and the Bible is the latest volume in Edwin Yamauchi's distinguished series of books surveying ancient civilizations treated in the Bible. This book comprehensively summarizes relevant scholarship on the civilizations of ancient north and northeast Africa. Particularly welcome is Yamauchi's convincing demonstration that the 'curse of Ham' is a myth without biblical foundations. Africa and the Bible is an invaluable overview of the biblical evidence regarding ancient Africa that will interest all students of ancient history and religion."--Stanley Burstein, department of history, California State University at Los Angeles; former president, Association of Ancient Historians

"Writing in a refreshing style that carefully abstains from scholarly obfuscation, Yamauchi has collated an extraordinary range of scholarly data on the historical and archaeological background of the biblical texts dealing with Africa. His efforts provide the reader with a primary source of information for everything from the Queen of Sheba to Black Athena."--Donald White, University of Pennsylvania

"I have long admired and closely followed Yamauchi's work. As an African, I feel greatly relieved that there is finally a solid treatment of Africa and the Bible. This book is neither condescending nor inaccessible. Yamauchi has brought together thorough historical research and easy reading. I have no doubt that this book will draw readership from academia as well as the streets."--Emmanuel Itapson, Jos Theological Seminary, Nigeria

"Drawing on a vast range of sources-ancient and modern, literary and archaeological-Yamauchi offers a superb discussion of the major questions concerning the relationship between the Bible and Africa. His final chapter presents an especially helpful response to contemporary Afrocentric approaches to the Scriptures. This fascinating study will be welcomed by those who need an introduction to the issues and those who are looking for a foundation for further study."--Daniel I. Block, president, Institute for Biblical Research

"Africa and the Bible is an important and significant contribution to the growing literature on the place of the African continent and its people in the Old and New Testaments. Yamauchi offers a mature and balanced treatment of the many controversial issues involved in the discussion, in contrast to many other works that present extreme views or are clearly ideological in nature. All readers of the Bible will find in this book much enlightenment. This work is especially helpful as a supplemental text for introductory courses in the study of the Bible."--Tite Tienou, academic dean and professor of the theology of mission, Trinity Evangelical Divinity School

"At a time when Africans are forming an increasing proportion of the world's Christians and Africa is becoming one of the major theatres of Christian life and activity, the issue of Africa's place in the Bible takes on a new importance. How valuable it is, then, to have such a volume as this--thorough, sober, succinct, learned, and judicious."--Andrew F. Walls, Centre for the Study of Christianity in the Non-Western World, University of Edinburgh

The curse of Ham has been used for many years as the justification for slavery. But is our biblical history askew? Could Jesus or Moses have been black? Although the connection between the Bible and Africa has been made, biblical references have been overlooked on the matter. The afrocentric studies that have been done often overlook the vast amount of archaeological evidence available. This book deals with the historical as well as the archaeological resources available to understanding biblical texts that deal with Africa. Dr. Yamauhi includes maps, charts, author, subject, and Scripture indexes, and an appendix critiquing Martin Bernals Black Athena. This is a must read for anyone who wants to learn about biblical history.
-Publisher

Edwin M. Yamauchi (Ph.D., Brandeis University) is professor of history emeritus at Miami University, Ohio. He is the author or editor of numerous books, including Persia and the Bible, Greece and Babylon, The Archaeology of New Testament Cities in Asia Minor, Harper's World of the New Testament, and Africa and Africans in Antiquity. A co-edited work, Peoples of the Old Testament World, won a Biblical Archaeological Society Award.