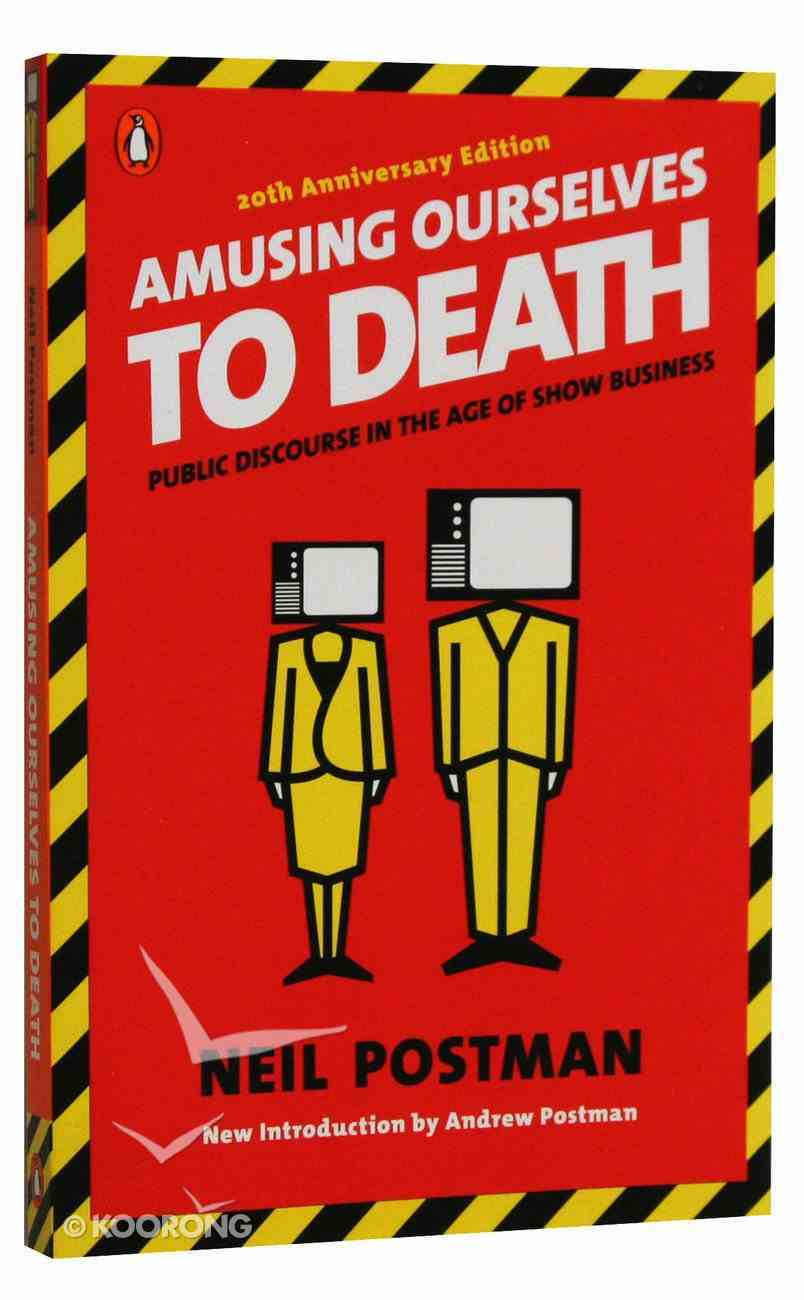 Amusing Ourselves to Death: Public Discourse in the Age of Show Business

Television has habituated us to visual entertainment measured out in spoonfuls of time. But what happens when we come to expect the same things from our politics and public discourse? What happens to journalism, education, and religion when they too...

The Dust of Death: The Sixties Counterculture and How It Changed America Forever
Os Guinness
Paperback

Selfies: Searching For the Image of God in a Digital Age
Craig Detweiler
Paperback

Four Arguments For the Elimination of Television
Jerry Mander
eBook

Haunted By Christ: Modern Writers and the Struggle For Faith
Richard Harries
Paperback

Television has habituated us to visual entertainment measured out in spoonfuls of time. But what happens when we come to expect the same things from our politics and public discourse? What happens to journalism, education, and religion when they too become forms of show business? Twenty years ago, Neil Postman's lively polemic was the first book to consider the way that electronic media were reshaping our culture. Now, with TV joined by the Internet, cell phones, cable, and DVDs, Amusing Ourselves to Death carries even greater significance. Elegant, incisive, and terrifically readable, it's a compelling take on our addiction to entertainment. Book jacket.
-Publisher

The prophetic landmark work exploring the corrosive effects of electronic media on a democratic society
Originally published in 1985, Neil Postman s groundbreaking polemic about the corrosive effects of television on our politics and public discourse has been hailed as a twenty-first-century book published in the twentieth century. Now, with television joined by more sophisticated electronic media from the Internet to cell phones to DVDs it has taken on even greater significance.
Amusing Ourselves to Death is a prophetic look at what happens when politics, journalism, education, and even religion become subject to the demands of entertainment. It is also a blueprint for regaining controlof our media, so that they can serve our highest goals.
-Publisher

Neil Postman was chairman of the department of communication arts at New York University. He passed away in 2003. Steve Powers is an Emmy Award-winning journalist with more than forty-five years experience in broadcast news.


Chapter 1. - The Medium Is the Metaphor


Chapter 6. - The Age of Show Business


Chapter 8. - Shuffle Off to Bethlehem


Chapter 9. - Reach Out and Elect Someone


Chapter 10. - Teaching as an Amusing Activity


Acclaim for Neil Postman&#8217;s Amusing Ourselves to Death


&#8220;As a fervent evangelist of the age of Hollywood, I publicly opposed Neil Postman&#8217;s dark picture of our media-saturated future. But time has proved Postman right. He accurately foresaw that the young would inherit a frantically all-consuming media culture of glitz, gossip, and greed.&#8221;

&#8220;A brillant, powerful and important book. This is an indictment that Postman has laid down and, so far as I can see, an irrefutable one.&#8221;

&#8220;He starts where Marshall McLuhan left off, constructing his arguments with the resources of a scholar and the wit of a raconteur.&#8221;

&#8220;This comes along at exactly the right moment.... We must confront the challenge of his prophetic vision.&#8221;


For the last third of the twentieth century, Neil Postman was one of America&#8217;s foremost social critics and education and communications theorists, and his ideas and accessibility won him an international following. An influential and revered teacher, he was professor for more than forty years at New York University, where he founded the renowned Media Ecology program. Blessed with an unusually far-reaching mind, he authored more than twenty books, producing major works on education (Teaching as a Subversive Activity, The End of Education), childhood (The Disappearance of Childhood), language (Crazy Talk, Stupid Talk), news (How to Watch TV News, with Steve Powers) and technology&#8217;s impact on culture (Technopoly). Amusing Ourselves to Death remains his most reverberating and widely read book, translated into more than a dozen languages. He was educated at the State University of New York at Fredonia and Columbia University. He died in October 2003, at the age of seventy-two.

Andrew Postman, Neil&#8217;s son, is the author of five books, including the novel Now I Know Everything. For several years he was a monthly columnist for Glamour and his work has appeared in The New York Times, The Washington Post, and New York Magazine, among numerous publications.

First published in the United States of America by Viking Penguin Inc. 1985
Published in Penguin Books 1986
This edition with an introduction by Andrew Postman published 2006

A section of this book was supported by a commission from the Annenberg Scholars Program, Annenberg School of Communications, University of Southern California. Specifically, portions of chapters six and seven formed part of a paper delivered at the Scholars Conference, &#8220;Creating Meaning: Literacies of our Time,&#8221; February 1984.

The scanning, uploading and distribution of this book via the Internet or via any other means without the permission of the publisher is illegal and punishable by law. Please purchase only authorized electronic editions, and do not participate in or encourage electronic piracy of copyrighted materials. Your support of the author&#8217;s rights is appreciated.


Introduction to the Twentieth Anniversary Edition


A book of social commentary published twenty years ago? You&#8217;re not busy enough writing e-mails, returning calls, downloading tunes, playing games (online, PlayStation, Game Boy), checking out Web sites, sending text messages, IM&#8217;ing, Tivoing, watching what you&#8217;ve Tivoed, browsing through magazines and newspapers, reading new books&#8212;now you&#8217;ve got to stop and read a book that first appeared in the last century, not to mention the last millennium? Come on. Like your outlook on today could seriously be rocked by this plain-spoken provocation about The World of 1985, a world yet to be infiltrated by the Internet, cell phones, PDAs, cable channels by the hundreds, DVDs, call-waiting, caller ID, blogs, flat-screens, HDTV, and iPods? Is it really plausible that this slim volume, with its once-urgent premonitions about the nuanced and deep-seated perils of television, could feel timely today, the Age of Computers ? Is it really plausible that this book about how TV is turning all public life (education, religion, politics, journalism) into entertainment; how the image is undermining other forms of communication, particularly the written word; and how our bottomless appetite for TV will make content so abundantly available, context be damned, that we&#8217;ll be overwhelmed by &#8220;information glut&#8221; until what is truly meaningful is lost and we no longer care what we&#8217;ve lost as long as we&#8217;re being amused.... Can such a book possibly have relevance to you and The World of 2006 and beyond?

The Wisdom Pyramid: Feeding Your Soul in a Post-Truth World
Brett McCracken
Paperback