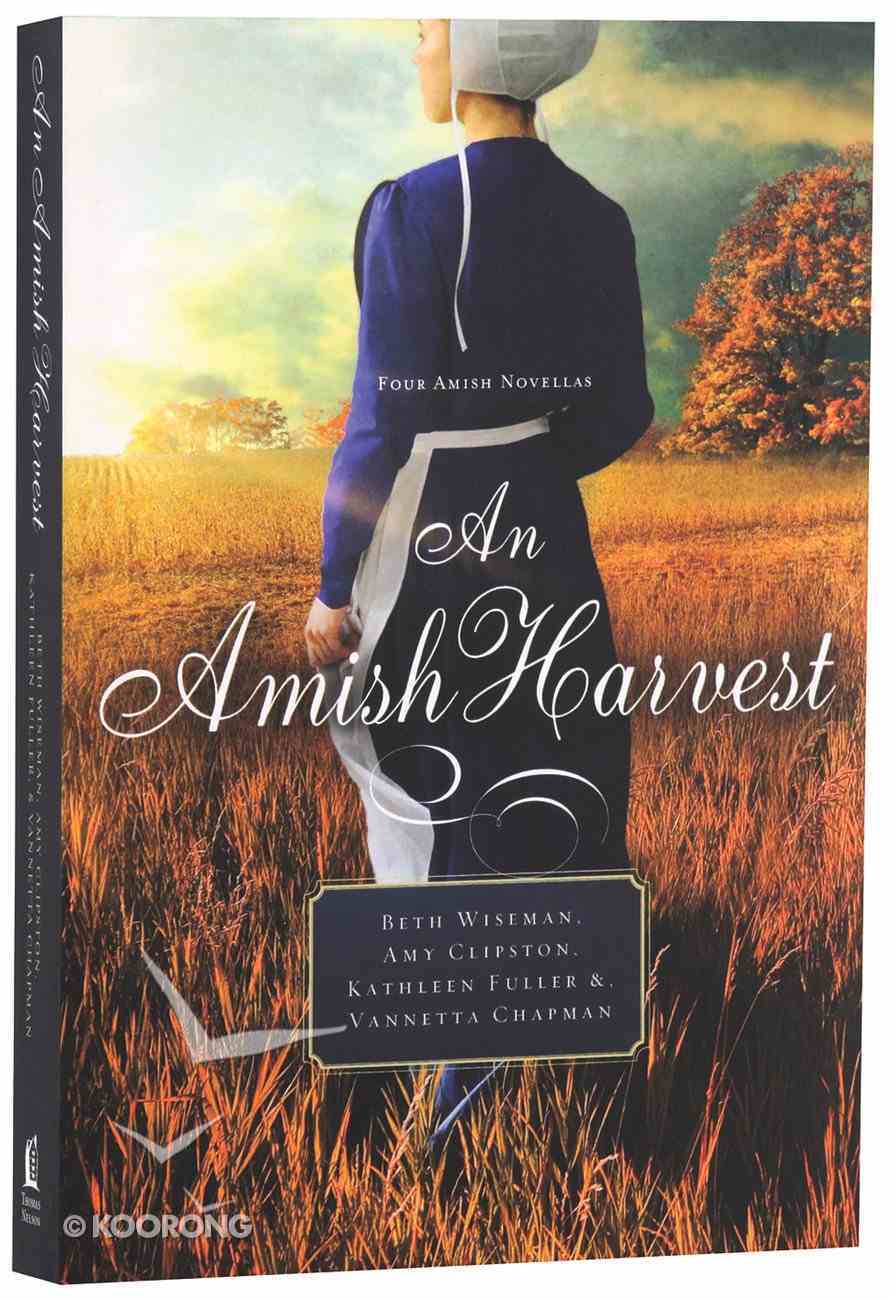 Calling all fans of Amish fiction! Here in one volume are four short novels by today's top Amish romance authors. Each one follows a young Amish woman and man as they navigate the ups and downs of life among the...

Calling all fans of Amish fiction! Here in one volume are four short novels by today's top Amish romance authors. Each one follows a young Amish woman and man as they navigate the ups and downs of life among the 'Plain People', trusting God to guide them to a love that lasts.

:
Under the Harvest Moon by Beth Wiseman


Can Brock and Naomi harvest a second chance for love?


Naomi Dienner is pregnant for the third time, but her beloved Joseph died before she even knew she was with child. As harvest time approaches, she decides to hire Brock Mulligan, an English friend of her father's, to help. Hard work and a strong faith are two things Brock has in common with his Amish friends. But when an old woman starts showing up at Naomi's house, filling her head with superstitions, Brock sees something sinister at work. As Brock struggles to prove to Naomi that the old woman is not to be trusted, he also struggles with his own growing feelings for Naomi and her children. Could God be giving him a second chance at love?


A romantic fall buggy ride is the perfect setting for love.


Janie Lantz works as a cashier at the Lancaster Souvenirs and Buggy Rides tourist attraction in Bird-in-Hand, where Jonathan Stoltfuz is a buggy driver. One day Janie witnesses Jonathan's buggy getting rear-ended and a few people are injured. Jonathan feels terrible about the accident and blames himself, and even though it wasn't his fault, his boss won't let him drive a buggy anymore. Since Janie witnessed the accident, she is able to clear Jonathan's name, and his appreciation of her grows along with their friendship. But Janie's parents have reservations about her dating someone older who has a dangerous job. Will they see that he is the young man for her, or will the coming winter end Jonathan's job and any hope of love?


Mischief in the Autumn Air by Vannetta Chapman


Eli and Martha don't seem like a match, but solving a mystery may uncover their true feelings.


Eli Wittmer has been running the Auction House in Shipshewana for eight years, but his new bookkeeper, Martha Beiler, is proving to be a challenge. When the items from Charity and Jacob Weaver's homestead start going above market value, Eli is at first thrilled and then puzzled. Martha finds a trail of clues that Eli at first refuses to accept, but when his office is broken into and some of those clues are stolen, he knows it's time to take action. Together they must work to solve the mystery before the fall festival ends-or Charity and Jacob may be in danger. As the festival ticks down to its final hours, Eli and Martha find they work better as a team. And it could be, that with the mystery and danger, love is also falling in the crisp autumn air.


Two young people must stand up for the love they know is right, despite what their friends and family say.


Dinah Hochstetler has always felt like an outsider in her small New York Amish community. Quiet and shy, she's content being alone with her books and writing. Dinah wants to get married but fears she'll never find someone who can see past her shyness and love her for herself.


Amos Mullet is a farmer who has spent his entire life protected by his family. Now that his brother is married, Amos has been thinking about his own future. He knows that people in his community think he's strange, and several of them think he's dumb. Amos has never understood why he's different from everyone else, but he knows he wants the same thing his brother has-a wife who loves him.


As Amos and Dinah navigate their new romance, they must also convince their families that through the power of love and the blessing of God they can have a genuine and loving marriage.

Vannetta Chapman is author of the best-selling novel "A Simple Amish Christmas". She has published over one hundred articles in Christian family magazines, receiving over two dozen awards from Romance Writers of America chapter groups. She discovered her love for the Amish while researching her grandfather's birthplace of Albion, Pennsylvania. C