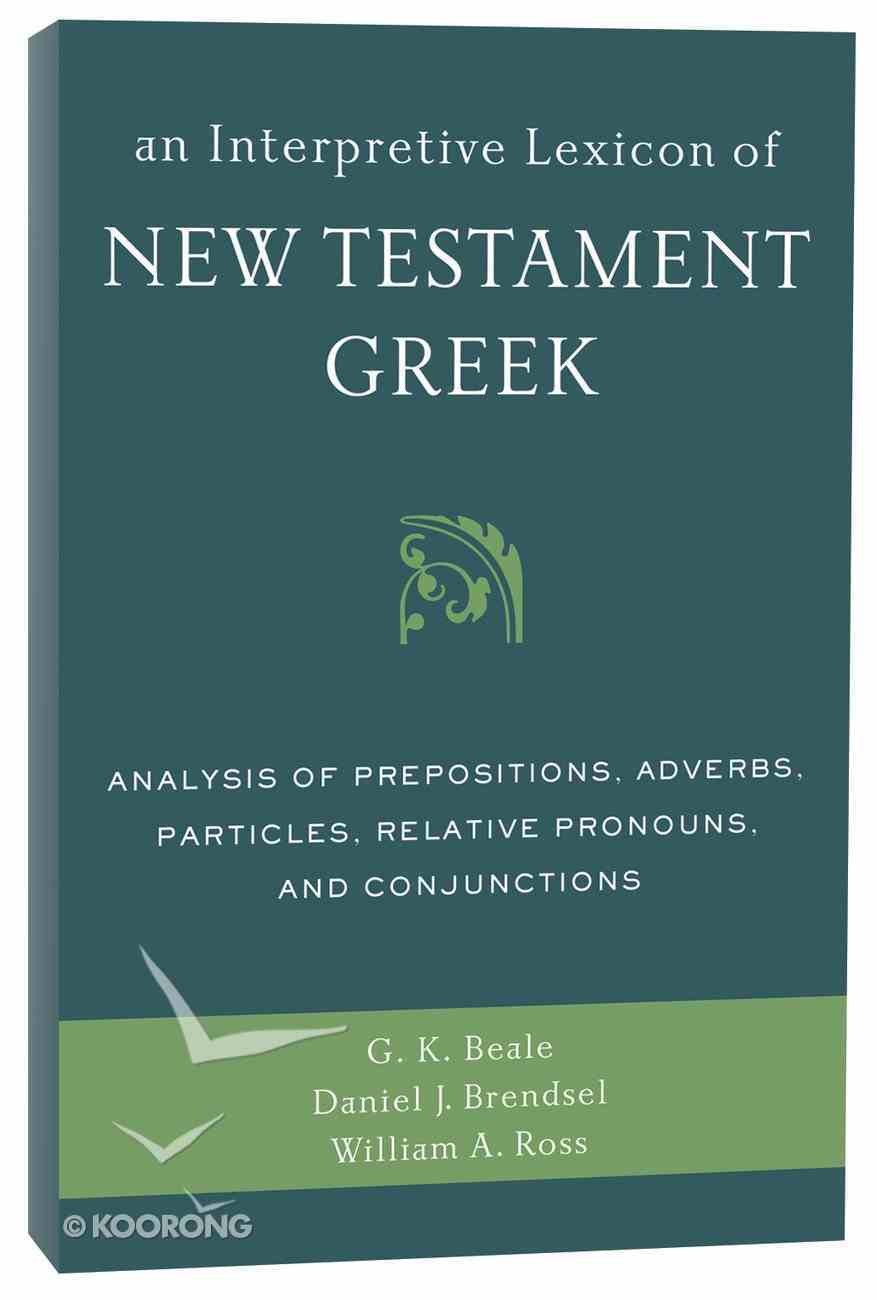 This detailed exegetical resource helps students and Bible teachers to tackle Greek prepositions, adverbs, particles, relative pronouns, conjunctions, and other connecting words that are often difficult to translate. A real time saver, and a great help with intepretation as well!...

5 available
Expected to ship within 10 hours from Australia.
Learn More
Free Shipping
for orders over $99.

This detailed exegetical resource helps students and Bible teachers to tackle Greek prepositions, adverbs, particles, relative pronouns, conjunctions, and other connecting words that are often difficult to translate. A real time saver, and a great help with intepretation as well! 96 pages, from Zondervan.

:This Interpretive Lexicon has two primary functions aimed at facilitating the exegetical and translational task, namely as a lexicon and also as an interpretive handbook. First, this book lists the vast majority of Greek prepositions, adverbs, particles, relative pronouns, conjunctions, and other connecting words that are notorious for being some of the most difficult words to translate. For each word included, page references are given for several major lexical resources where the user can quickly go to examine the nuances and parameters of the word for translation options. This book will save considerable time for students of the Greek New Testament text. For example, for the Greek preposition en (occurs 2,750 times in the New Testament) covers four pages of small print in the Bauer-Danker lexicon (BDAG). But Interpretive Lexicon digests those pages in just a few lines, with the page numbers and section references given for A Greek-English Lexicon of the New Testament and Other Early Christian Literature, 3rd Edition (BDAG, ?00) and 2nd Edition (BAGD, ?79), Greek Grammar Beyond the Basics (Daniel B. Wallace), and Prepositions and Theology in the Greek New Testament (Murray J. Harris). Thus, the translation options can be analyzed quickly. For words with a lower frequency of occurrence and fewer translation options, this book may be sufficient in itself as a lexicon. Secondly, these prepositions, conjunctions, adverbs, and connecting words in Greek, as in every language, function as explicit discourse-level markers that are essential for ascertaining the main point(s) of a passage. Therefore, this Interpretive Lexicon also evaluates the discourse function(s) of each word that is defined and catalogued, and categorizes its semantic range into defined logical relationships. This feature of the lexicon adds an interpretive element, since translation must include interpretation, at least on a linguistic level. For example, en may be translated in many ways, but those ways are categorized broadly in this book into relationships such as locative (in, among, on), means-end (with, by), grounds (because, on account of), temporal (while, at), and so on. This interpretive feature of the book is tremendously helpful for the exegetical process, allowing for the translator to closely follow the logical flow of the text with greater efficiency. This Interpretive Lexicon is thus a remarkable resource for student, pastor, and scholar alike.
-Publisher