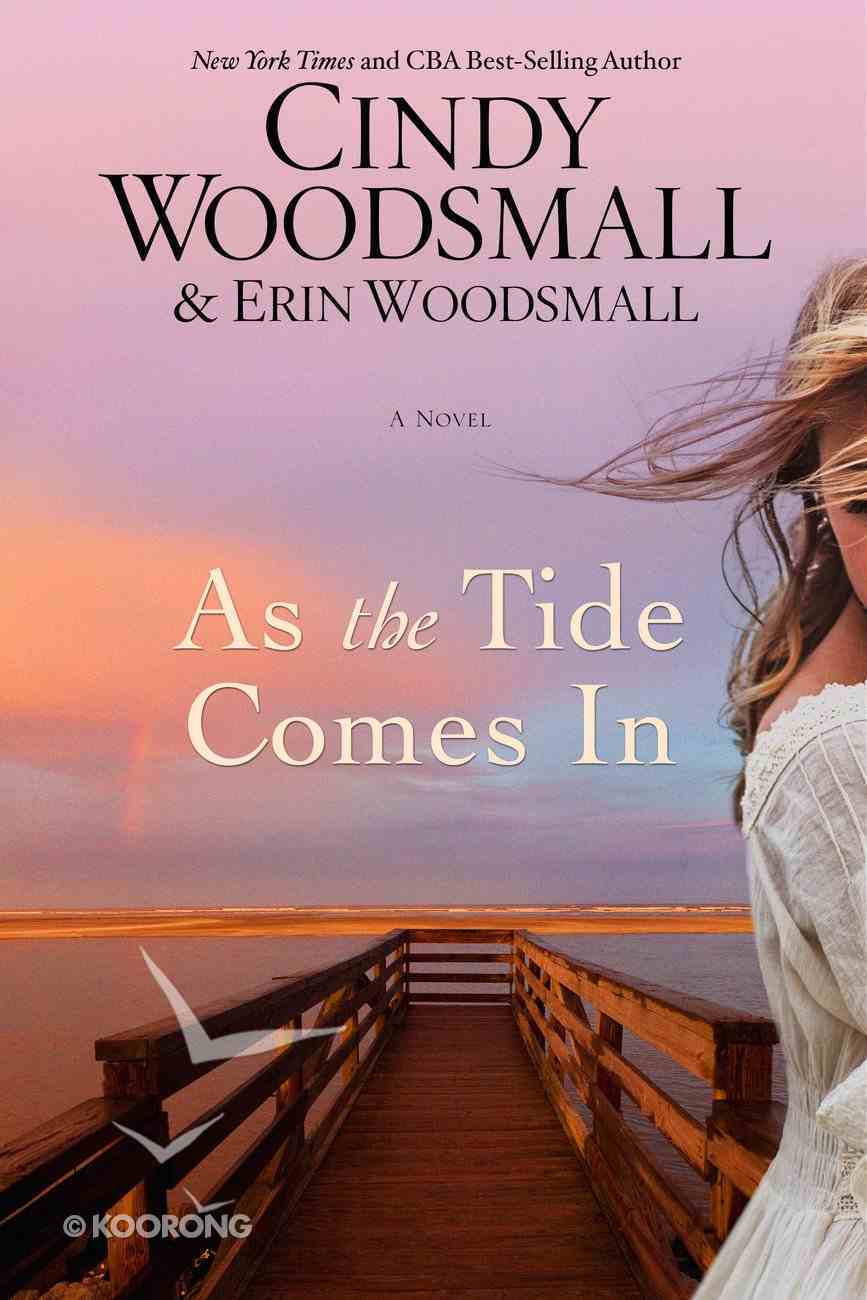 As the Tide Comes in

2 available
Expected to ship within 13 hours from Australia.
Learn More
Free Shipping
for orders over $99.

Ours For a Season
Kim Vogel Sawyer
Paperback

As the Tide Comes in
Cindy Woodsmall, Erin Woodsmall
eBook

After losing two loved ones in a devastating tornado and suffering a head injury, Tara Abbott flees to St. Simons Island, where her disorientation causes the lines between imagination and reality, past and present to blur.

There she encounters island residents Julep Burnside, Luella Ward, Sue Beth Manning, and Dell Calhoun--The Glynn Girls--who have been friends since Bible camp, forty years earlier. When Julep's son Gavin identifies a troubled soul in need of help, can the Glynn Girls guide Tara back to herself?
-Publisher

ERIN WOODSMALL is a writer, musician, wife, and mother of three. She has edited, brainstormed, and researched books with Cindy Woodsmall for almost a decade.


The canvas painting on the wall called to Tara as she walked back into the kitchen, this time her arms filled with rock-climbing gear. She set everything on the table and went to the painting. Once again her heart beat faster, and whispers from a past she didn&rsquo;t remember haunted her. It was the sole remaining object from her childhood. The day social services arrived at the trailer to take her away, Tara begged to take the painting with her. After all, it had been given to her&hellip;maybe.


The painting was of a lighthouse, beach, and ocean, as if the artist&rsquo;s view was from the ocean. Deep red and gold reflected off the water as though it was depicting sunset, or maybe sunrise, but those colors were usually brighter and lighter. That painting and the woman who painted it seemed connected to Tara somehow. At the bottom the artist had signed it &ldquo;To my Spunky Boo ~ Love you, Nana.&rdquo; Tara had no recollection of anyone named Nana, but she did recall her mom calling her Spunky Boo at times, so the artist either knew that or also called Tara that. As a child abandoned to the foster care system by a drug-addicted mother, she liked to daydream that someone somewhere loved her.


A noise from the bedrooms in the small apartment pulled Tara from her thoughts. Why was she marinating in old hurts? After months of working two jobs, she had the entire day off, and she would not spend another second thinking about sad things.


She sat in a kitchen chair and put on her athletic shoes. She&rsquo;d restocked the grocery store shelves until midnight, so she&rsquo;d slept late. As good as that felt, she knew the best part of the day was still ahead. Her gear was spread across the small table: dynamic ropes, various sizes and shapes of carabiners, and a climbing pack with power snacks and water. Her TomTom was on the table too. It had nothing to do with climbing mountains, but it got her to the agreed-upon destinations to gather with other climbers.


&ldquo;Oh, thank goodness.&rdquo; Hadley&rsquo;s voice carried down the short hallway. She stepped into the kitchen, wearing a robe, her hair wrapped in a towel. &ldquo;I smell coffee.&rdquo;


&ldquo;Tara,&rdquo;&mdash;Elliott was behind her, already in her hospital uniform&mdash;&ldquo;please never quit your job at the grocery store.&rdquo; Her roommates made a beeline for the coffee maker.


Hadley and Elliott had worked second shift last night and then stayed for some overtime hours, so they&rsquo;d slept in later than Tara.


&ldquo;The good news is we have coffee.&rdquo; Tara picked up the TomTom and began entering the address of today&rsquo;s destination. &ldquo;The bad news is we only had enough money for either coffee or milk, not both.&rdquo;


&ldquo;As always, T,&rdquo;&mdash;Hadley put the mug to her lips, closed her eyes, and took a sip&mdash;&ldquo;you made the right decision.&rdquo;


&ldquo;Yeah,&rdquo; Tara scoffed, &ldquo;it&rsquo;s almost as if I&rsquo;d spent years under the same roof with you two while growing up or something.&rdquo;


Hadley and Elliott chuckled. The three of them had shared a foster home for several years. That&rsquo;s when the feeling of sisterhood began, and even though Hadley and Elliott had quit high school and run off to work and live in Georgia until they were legal adults, they had continued the bond with Tara through phone calls and emails, so very many calls and emails.


Tara shoved the TomTom into her backpack. &ldquo;Be sparing with the sugar. It doesn&rsquo;t go on sale until next week.&rdquo;


Maybe when they had college degrees, they&rsquo;d make decent money, but for now they eked by on minimum wage jobs, sharing the bills and saving every penny for their education. Tara had graduated high school a couple of months ago, and with some help from the state, she&rsquo;d begin college this fall, although she was unsure what her major would be. Was there a degree that could mix her two favorite things: food and outdoor life?


Hadley and Elliott knew what they wanted degrees in, but right now they were working toward getting their GED.


&ldquo;Oh, this came for you yesterday.&rdquo; Elliott pulled a letter out of the pocket of her scrubs.


Tara took it from her. &ldquo;A real letter?&rdquo; She glanced at the return address. There wasn&rsquo;t a name on it, and what little Tara could make out, she didn&rsquo;t recognize. But it was to Miss Tara Abbott and had her address. &ldquo;Who even sends these anymore?&rdquo;


&ldquo;That&rsquo;s exactly what I thought.&rdquo; Elliott opened the fridge and grabbed the carton of eggs. &ldquo;Have you eaten, T?&rdquo;


&ldquo;Yeah.&rdquo; She glanced at the clock on the stove. &ldquo;I need to leave in a few.&rdquo; Her climbing buddies would be gathering at a specific parking lot in ninety minutes, and it&rsquo;d take Tara more than an hour to drive there. She and her climbing buds had been planning quite a while for today&mdash;Saturday, July 2. They&rsquo;d climb the face of a mountain long before sunset, waste time until dark, and watch fireworks. Afterward, using flashlights, they would hike down a clear trail on the slope of the mountain.


Tara pulled the letter from its envelope. The notebook paper looked as if it&rsquo;d been jerked from a three-ring binder. She glanced at the signature. &ldquo;It&rsquo;s from Patricia.&rdquo;


Tara looked up, surprised by the question. On the other hand, Tara had met the woman only once, four years ago when she&rsquo;d brought Sean and Darryl to the foster family and biological family picnic. It was the first and last time Tara had seen any of them. &ldquo;She&rsquo;s my half-brothers&rsquo; grandmother.&rdquo;


&ldquo;Ah.&rdquo; Elliott slid her hands into the shirt pockets of her scrubs. &ldquo;I&rsquo;m not sure I even knew her first name. You say little about her, and when you do, you usually call her Mrs. Banks.&rdquo;


The three of them had no real family, so it seemed that the name of Tara&rsquo;s almost relative should be etched in Elliott&rsquo;s mind, but she had a reasonable point. Tara nodded and turned her attention to the note.


I know it&rsquo;s been years since the boys and I have seen you, but I have good memories of that day. I&rsquo;m hoping you&rsquo;d be willing to reconnect. I have some important matters I need to talk to you about&mdash;they are rather urgent, but they are also familial ones.


Could you come for a visit in the next few days?


It ended with the woman&rsquo;s address written in large letters.


Hadley sat in one of the kitchen chairs. &ldquo;Anything important going on?&rdquo;


Tara passed her the note.


&ldquo;I wondered the same thing, but my guess is it&rsquo;s familial, as in a family-related issue.&rdquo; Tara shrugged. &ldquo;My mom probably showed up on her steps, looking for shelter&mdash;and money&mdash;and that very kind, sweet old woman has no idea what to do about it. I have good advice for Mrs. Banks. Tell her, &lsquo;This isn&rsquo;t your house. Now get out.&rsquo;&rdquo; She shrugged. &ldquo;If that doesn&rsquo;t work, she should call the police.&rdquo;


&ldquo;Maybe so.&rdquo; Tara had no burning desire to see her mom, and maybe that wasn&rsquo;t what was going on, but she was curious. Why was Mrs. Banks reaching out? Were the boys okay?


Memories of the day she met Mrs. Banks and her half brothers were more like snapshots than a video clip. Tara had been fourteen at the time. Sean was the older of the boys, and he&rsquo;d been five. Despite the awkwardness of having just met and the nine-year age gap, they&rsquo;d had fun, even won a three-legged race and came close to winning the watermelon-eating contest. The younger one, Darryl, hadn&rsquo;t been quite a year old then, and he&rsquo;d been whiny or asleep the whole time.


Hadley studied the envelope. &ldquo;And there&rsquo;s no chance that Patricia Banks is your nana, right?&rdquo;


Tara&rsquo;s attention moved to the eleven-by-fourteen canvas painting. &ldquo;No.&rdquo; She fidgeted with the rope, uneasy with any talk of unearthing a maternal or paternal family member. It was never going to happen, and she didn&rsquo;t like entertaining the false hope that it would. She&rsquo;d not seen her mom since she&rsquo;d abandoned her ten years ago. Within a day of her mom walking out, Child Protective Services showed up and took Tara away, allowing her to take the painting with her. After hightailing it elsewhere, had her mom called CPS and left an anonymous tip?


It didn&rsquo;t matter. For Tara, foster care was definitely the better place to grow up. &ldquo;No way. Mrs. Banks is Sean&rsquo;s and Darryl&rsquo;s paternal grandmother. My mom met her after we moved to North Carolina and after I entered foster case. I&rsquo;d had that painting for years by then.&rdquo;


&ldquo;Okay.&rdquo; Hadley rapped her fingers on the table again. &ldquo;I figured as much, but it was worth a shot.&rdquo;


Tara used to dream of finding the woman who&rsquo;d painted the picture, but how did one search for an unknown place where a &ldquo;Nana&rdquo; may or may not live?


Elliott cracked an egg into a bowl. &ldquo;How old are the boys now?&rdquo;


Hadley pointed at the letter. &ldquo;How did Patricia even know where you live?&rdquo;


Tara put the ropes and carabiners into her backpack. &ldquo;Maybe she got our address from Dianna.&rdquo;


&ldquo;It&rsquo;s possible.&rdquo; Tara shrugged. &ldquo;Mrs. Banks and Dianna talked a good bit the day of the picnic. When Mrs. Banks needed my new address, my guess is she called Dianna. She&rsquo;s made a reasonable request, and I&rsquo;m pretty curious about what&rsquo;s going on.&rdquo; Tara opened the short letter. &ldquo;It says they&rsquo;re in Sylva, North Carolina. Either of you know how far that is from Asheville?&rdquo;


&ldquo;Sure.&rdquo; Hadley opened Tara&rsquo;s backpack and pulled out the TomTom. &ldquo;It&rsquo;s about an hour west of us here in Asheville, not far from my dream school of Western Carolina University. I think the best way to get there is on the Great Smokey Mountains Expressway, but your TomTom should take you right to it.&rdquo;


&ldquo;Okay. Good to know. I&rsquo;m not changing my plans today. If it&rsquo;s that urgent, she can call the police.&rdquo; Besides, if Tara kept her plans in place, she could show the note to James and get his opinion. He was close to thirty, a bit of an older-brother type, and he&rsquo;d taught her how to rock climb and rappel. She didn&rsquo;t see him outside of group gatherings for hiking or rock climbing, but he and his longtime girlfriend were always willing to listen and offer some helpful life tips. &ldquo;And I gotta be in the bakery department at four in the morning. I work until noon on the Fourth, but I could go that afternoon.&rdquo;