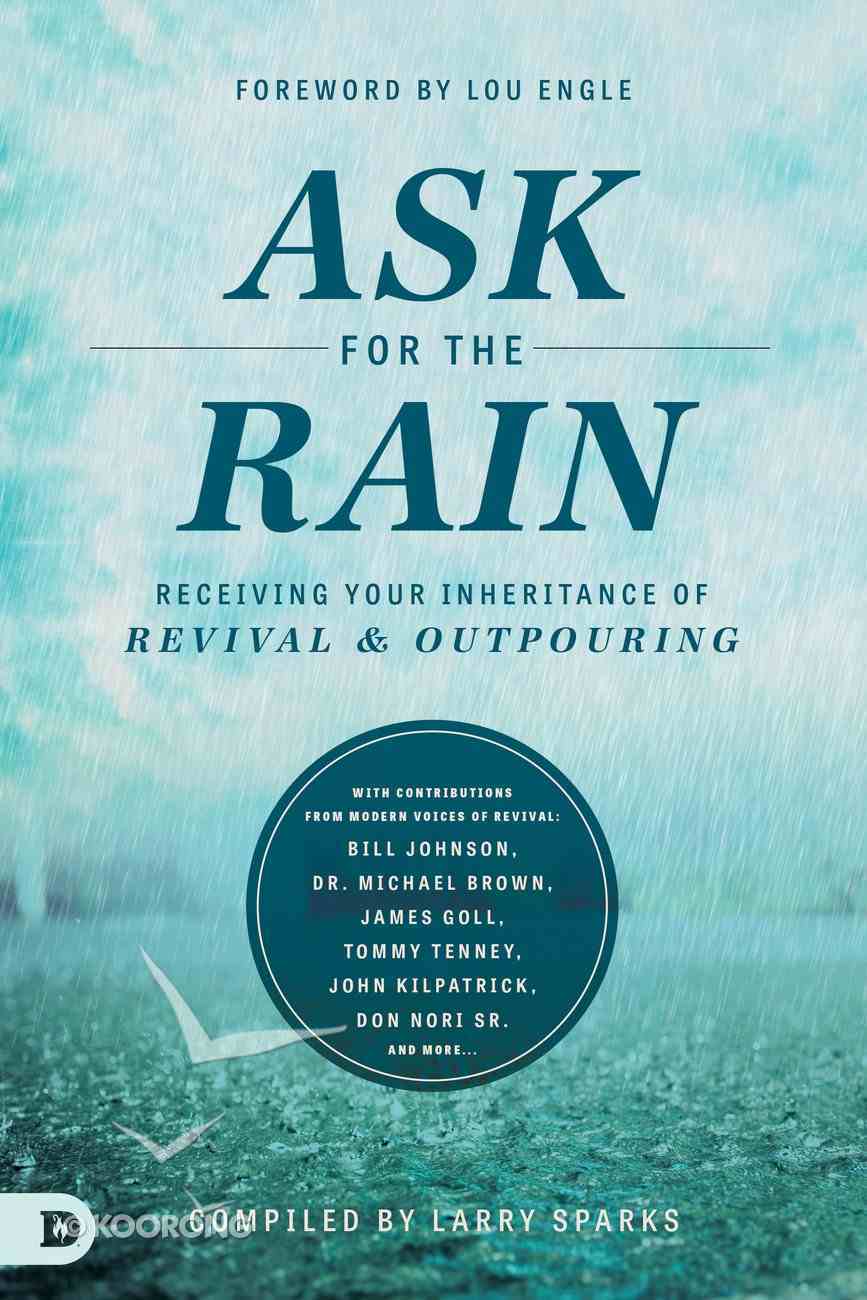 Ask For the Rain

: Position Yourself to Experience Holy Spirit Outpouring! Ask the LORD for rainIn the time of the latter rain. (Zechariah 10:1) God is pouring out His Spirit and revival rain is falling across the Earth. How should...

Mornings and Evenings in His Presence: A Lifestyle of Daily Encounters With God
Bill Johnson, Beni Johnson
Paperback


Ask the LORD for rainIn the time of the latter rain. (Zechariah 10:1)


God is pouring out His Spirit and revival rain is falling across the Earth. How should you respond? Ask for more!


How can revival impact your everyday life? Maybe you've thought revival is for "super-charged" Christians-not for everyday people going through everyday life. Wrong. God wants your everyday to be overflowing with Holy Spirit power.Do you feel like there is more to being a Christ-follower than rhetoric, rules and regulations? The truth is, you were created for a dynamic relationship with the living God. Don't settle for scattered showers when there is a great outpouring available.


God is seeking ready ground to pour out His revival rain on.

John Kilpatrick is pastor of Brownsville Assembly of God.

Don Nori Sr, along with his wife Cathy, founded Destiny Image Publishers January 1, 1983. During the past 27 years, they have rejoiced, cried and grown together as God fulfilled His calling in their lives.They are a genuine testimony of how God can take truly raw material and use it for His glory. Without any experience in publishing and absolutely money, the Lord has shown them what faith, holy risk-taking and abandonment to Him can accomplish."I will cause you to publish the prophets" was the phrase the resounded through their spirits as God built within them the zeal for His prophetic word. Nestled in the foothills of the Appalatian mountains in south-central Pennsylvania, Don and Cathy build Destiny Image into a world-wide prophetic publishing voice. Four of their five sons work at DI. Don Jr is the President and chief marketing officer. Jonathan is the VP for Operations and IT. Both work at the home office. Nathan Martin is the VP for financial operations along with 40 other employees and countless writers, editors, artists, sales people and authors.

Banning Liebscher was on staff at Bethel Church for eighteen years, and founded the ministry Jesus Culture during that time. As the Jesus Culture conferences grew, Banning and his family relocated to start a Jesus Culture church to continue to equip revivalists and reformers.

Dr. Michael Joseph Brown(PhD., The University of Chicago Divinity School) is Associate Professor of New Testament and Christian Origins at Candler School of Theology. Dr. Brown's research interests focus on Christian origins and Christianity in Roman Egypt. He also has an interest in receptions of the Bible in modern culture. Blackening of the Bible: The Aims of African American Biblical Interpretation, The Lord's Prayer Through North African Eyes: A Window Into Early Christianity and What They Don't Tell You: A Survivor's Guide to Academic Biblical Studies.

Tommy Tenney is the author of the bestselling series The God Chasers, God's Favorite House, The God Catchers, and God's Eye View. He spent ten years pastoring and has spent over twenty years in itinerant ministry, travelling to more than forty nations. He speaks in over 150 venues each year sharing his heart with many thousands. His two passions are The Presence of God and Unity in the Body of Christ. To help others pursue these twin passions, he founded the God Chasers network, a ministry organised to distribute his writing and speaking through various mediums. Three generations of ministry in his family heritage have given Tommy a unique perspective on ministry. He has a gifting to lead hungry people into the presence of God. He and his wife, Jeannie, reside in Louisiana with their three daughters and two Yorkies. - Publisher.