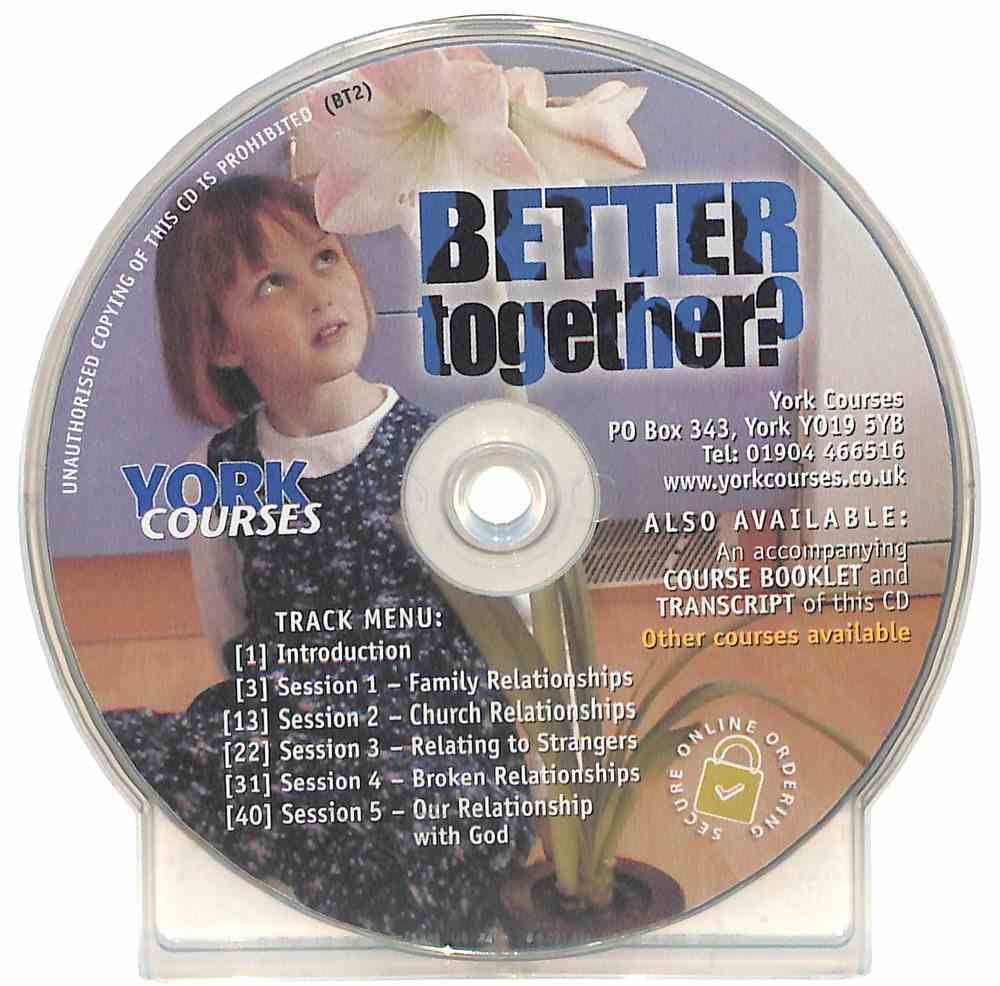 Better Together? : A Course in Relationships in 5 Parts (Cd-Audio) (York Courses Series)

An ecumenical course for discussion groups in five sessions - ideal for Lent, yet not Lent-specific comprising course booklet, audio and transcript In addition to relationships within the family and church, this thought-provoking 5-session course considers the way...

An ecumenical course for discussion groups in five sessions - ideal for Lent, yet not Lent-specific

In addition to relationships within the family and church, this thought-provoking 5-session course considers the way we relate to strangers, mend broken relationships and relate to God.

Christianity is not just a private matter. Yes, it is about our own interior life and our personal relationship with God - but it is much, much more. It is concerned with how we treat and relate to one another both inside and outside the church; it is about how we function as families and societies; it is about how broken relationships can be mended and what to do when they can't.

These are the areas of life that Better Together? deals with - and it looks frankly at how the Christian perspective may differ from that of society at large.

The participants on the course audio are John Bell, Nicky Gumbel and Jane Williams. Abbot Timothy provides the thoughtful Closing Reflection at the end of each session.

The course booklet, written by Canon John Young and Revd David Gamble includes a good selection of questions at the end of each of the five sessions, designed to stimulate wide-ranging discussion. Each group needs 1 copy of the course audio, and ideally a personal copy of the course booklet for each member. In addition many groups find the transcript, which sets out the words as spoken on the recorded material, invaluable.

John L. Bell is a writer, occasional broadcaster, and a member of the Wild Goose Resource Group of the Iona Community, working in the areas of liturgy and spirituality. He is the author of Hard Words for Interesting Times: Biblical texts in contemporary contexts; Thinking Out Loud; He Was In the World and All That Matters

Nicky Gumbel practised as a barrister for six years before being ordained into the Church of England. He joined Holy Trinity Brompton as curate in 1986 and took over the running of their Alpha Course in 1990. In 1996 the Bishop of London appointed him as an Alpha Chaplain. He speaks regularly at national and international Alpha conferences and is the author of several books including Questions of Life, which has sold over 750,000 copies, has been translated into 48 languages and was voted Christian Book of the Year.- Publisher.

Jane Williams was born in India, one of five sisters, and read Theology at Cambridge University before going on to work in theological publishing and education.
She has published, amongst other things, Bread, Wine and Women (with Sue Dowell); Perfect Freedom, Lectionary Reflections; Approaching Christmas and, more recently, Approaching Easter. She has also written a Sunday readings column for the Church Times.


Jane now works as a Visiting Lecturer at King's College London, as a Lecturer at the St Paul's Theological Centre, and for Redemptorist Publications.


Jane and Rowan (Archbishop of Canterbury) have been married since 1981 and together they have a son and a daughter.

Jesus the King: Understanding the Life and Death of the Son of God (Study Guide)
Timothy Keller (Ed)
Paperback