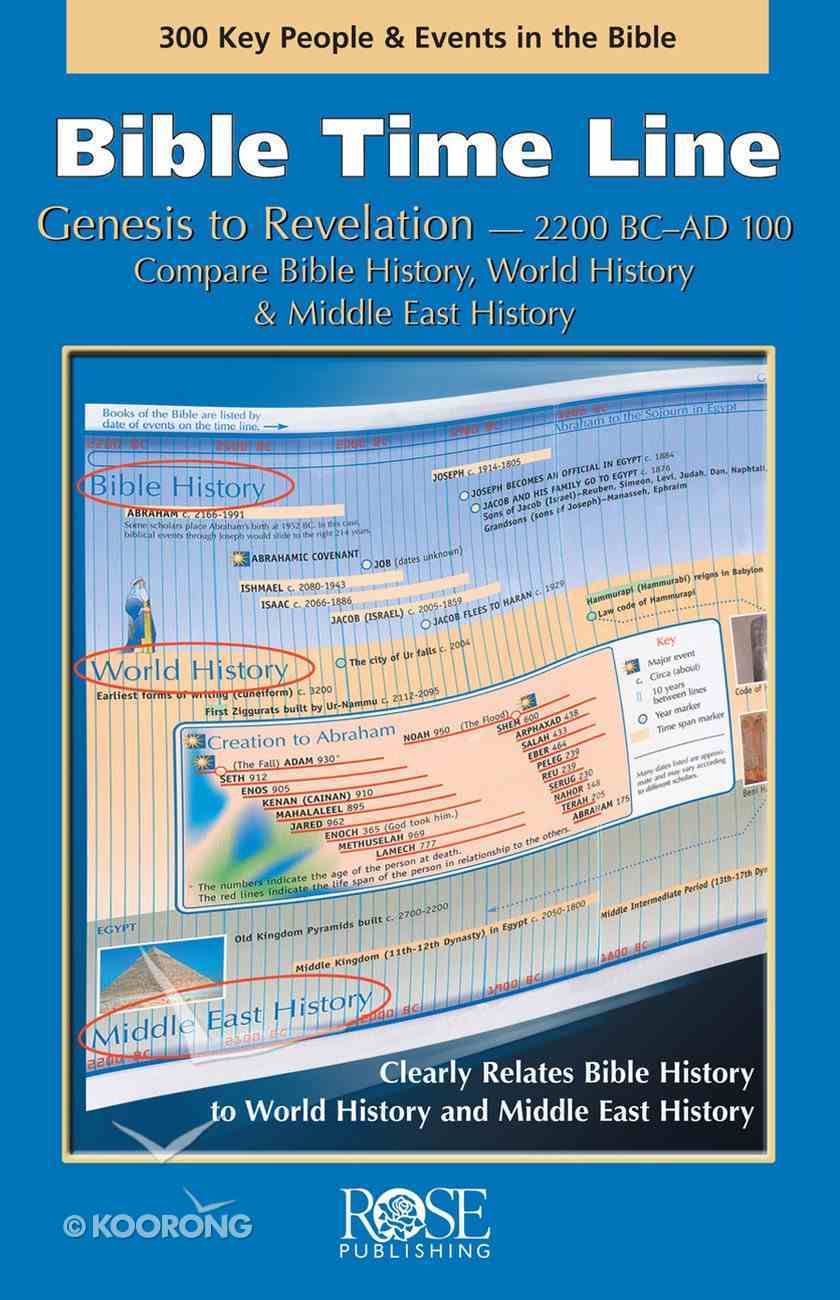 Bible Time Line is the best-selling Bible timeline sold in Christian stores. It covers from Genesis to Revelation in a glance! Bible Time Line ebook shows hundreds of events in biblical history side-by-side with world and Middle East history. Know...

Bible Time Line is the best-selling Bible timeline sold in Christian stores. It covers from Genesis to Revelation in a glance! Bible Time Line ebook shows hundreds of events in biblical history side-by-side with world and Middle East history. Know the 200 most important people and events in the Bible, including all of the kings and prophets. Compare biblical events to world events chronologically.

For example, Bible Time Line makes fascinating comparisons: The first Olympic games in Greece were at the time of Jonah in the Old Testament. This handy ebook is filled with full-color illustrations and photographs. There is no better timeline of Bible history for Bible studies, church groups, Sunday schools, and small groups.


The Bible Time Line Covers Every Major Event in Bible History It begins with Genesis and Adam and Eve, through the life of Abraham, and ends with the life of the apostle John and the Book of Revelation. The ebook provides key dates, events, and leaders from the Bible, world and Middle Eastern history. You will gain a new perspective on the place and time of biblical history when you see the comparisons. Fascinating Facts: Compare Bible History and World History Old Testament Events The first recorded Olympic game in Greece was held during the time of Jonah. Daniel lived in Babylon at the same time Confucius was in China and Buddha was in India. Moses was leading the Exodus while the Sheng Dynasty was flourishing in China. The Greek historian Homer lived during the time of Isaiah, Amos, and Micah. New Testament Events Mt. Vesuvius erupted and buried the city of Pompeii just 50 years after Jesus' death and resurrection. The apostle John probably would have known about it. Emperor Caligula who ruled 7 years after Jesus' resurrection was a madman. He made his horse a senator. Trajan, the general who destroyed Jerusalem in 70 AD, later became Emperor of Rome. He officially made Christianity a crime punishable by death. When Paul was taken under guard to Rome, he didn't see the Colosseum. It was built 4 years after his death. Emperor Nero, who had Peter and Paul executed, also had his wife and mother killed.
What Makes Bible Time Line the Best and Most Affordable Bible Chronology The Bible Time Line includes: The Books of the Bible and the centuries in which events occurred A special inset covering Creation to Abraham Biblical eras such as Abraham to the Sojourn in Egypt, Moses and the Exodus, the Judges, United Kingdom, Divided Kingdom, the Exile, Restoration of Jerusalem, Intertestamental Period, and ultimately, the New Testament. Lists key events such as the establishment of the Abrahamic Covenant, the First Passover, the Tabernacle, the Ten Commandments, the prophets, the kings and their years of rule, the restoration of Jerusalem, the building of the Temple, the birth of John the Baptist, plus so much more. Kings and Prophets Time Line Showing all of the Kings and Prophets of Israel and Judah World history time line includes: World events such as the emergence of writing forms, the first code of law, the Iron Age, the Trojan war, the founding of Rome, the birth of Buddha and Confucius, Alexander the Great's conquests, Cleopatra's rule, the fall of Masada, and numerous other events Middle East history time line includes: The building of the Egyptian pyramids, the rule of Amenhotep II (among other Pharaohs), the rise of the Persian Empire, the Roman Empire, and literally dozens of other historical facts. Bronze Age and Iron Age Events