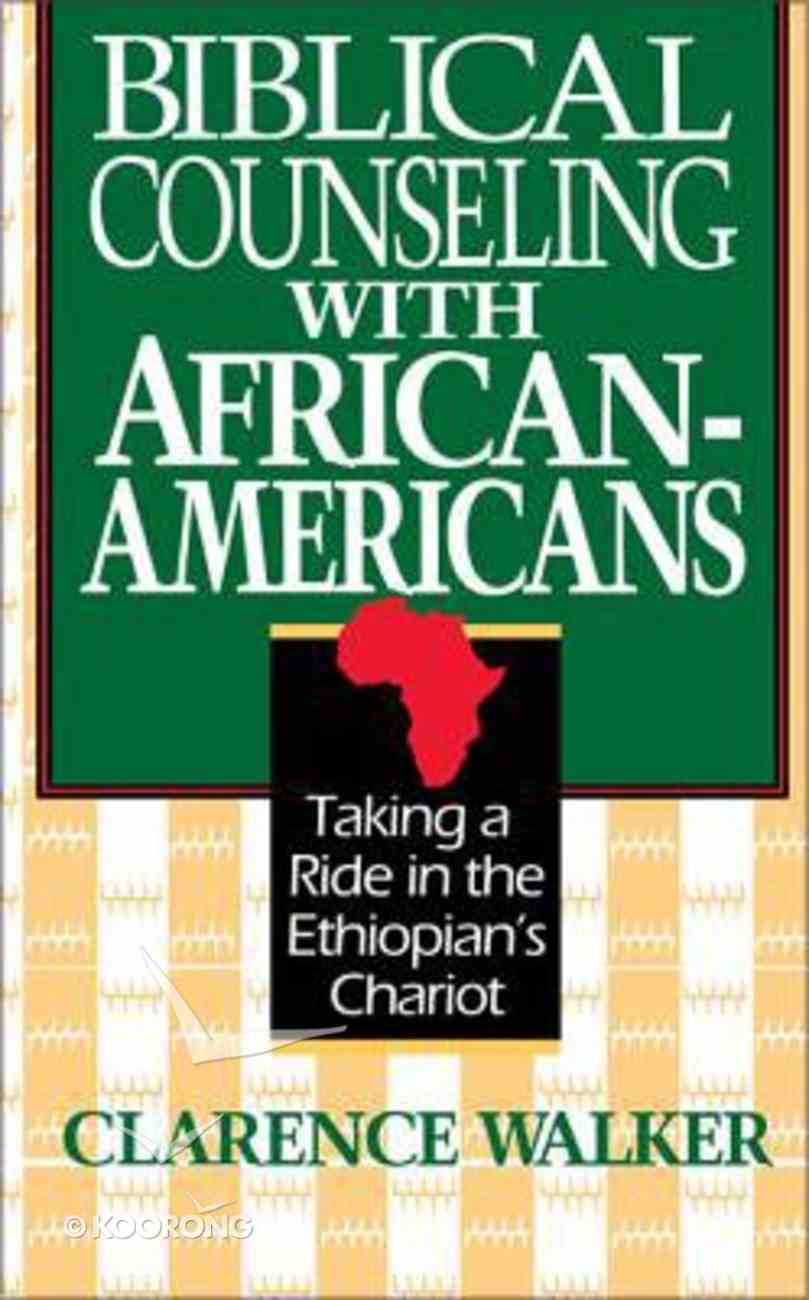 This book is a practical and biblical guide for all who engage in counseling African-Americans. Its purpose is to set forth the issues, principles, and interventions of counseling, especially in terms of marriage counseling and family therapy. Clarence Walker provides...

This book is a practical and biblical guide for all who engage in counseling African-Americans. Its purpose is to set forth the issues, principles, and interventions of counseling, especially in terms of marriage counseling and family therapy. Clarence Walker provides a framework for the book in the biblical story of the apostle Philip and the Ethiopian charioteer as recounted in the book of Acts. In Walker's view this story involves the same issues that confront African-Americans today. Specifically, in Part 1 Walker sees seven challenges that Philip faces as a 'Christian counselor': - Ethnicity . . . - Socio-economics - Gender . . .- Environment - Sexuality . . . - Religion - Power -- Part 2 builds on this foundation to develop ten biblical principles for an effective therapeutic process -- all recognizable in the interaction between Philip and the Ethiopian. These include -- - Directive engaging . . . - Explorative questioning - Affective joining . . . - Positive terminating - Active listening . . . - Cooperative involving -- Part 3 explains biblical techniques for treatment. Five approaches are offered to use with couples, and three are presented for counseling individuals.
-Publisher

Clarence Walker is a licensed marriage and family couselor who holds a PhD in counseling from Trinity Theological Seminary and an MSW from Temple University. He is an ordained minister and the founder-director, with his wife Ja'ola, of Clarence Walker Ministries, a preaching, teaching, and music ministry in Philadelphia.

Part I Counseling Issues With Black Counselees Chapter 1 Ethnicity Issues 'A Man of Ethiopia' (Acts 8:27) One of the first challenges faced by Philip in Acts 8:27 was the fact that the eunuch was an Ethiopian, a man of a different ethnicity and nationality. This same issue confronts the nonblack counselor seeking a therapeutic relationship with black counselees. If counselors are to experience a successful chariot ride through the course of counseling, it is important that they recognize the possible impact of ethnicity. When this factor is not taken into consideration, it may lead to mistaken presumptions concerning behavior observed in counseling. Often blacks are viewed through ethnocentric glasses and evaluated by white middle-class norms. On the other hand, counselors can be influenced by ethnicity in stereotyping African-Americans as a people. This notion is just as counterproductive as the view that depreciates the importance of racial factors. Counselors need to be aware of these factors without attaching too much significance to either of them. They should maintain a balanced view. Counselors, whether clinicians or clergy, must be cognizant of their own values about African-Americans and how they may negatively influence the therapeutic alliance. As a general Christian ethic, we ought to operate on the following premises: 'God is no respecter of persons: But in every nation he that feareth him, and worketh righteousness, is accepted with him' (Acts 10:34--35); in Christ 'there is neither Jew nor Greek' (Galatians 3:28) and God 'hath made of one blood all nations of men for to dwell on all the face of the earth' (Acts 17:26). Even so, the question still remains: what is the role of black ethnicity in therapy? Since most counselors, Christian or otherwise, have had little knowledge of blacks, a good place to start is their familial kinship history from West Africa to America. West African Familial Structures From the work of black scholars we learn that each aspect in the lives of West Africans was permeated with the African belief in strong kinship bonds. The notion of rugged individualism dominated European economic philosophy. However, the West African land was owned not by individuals, but by the tribal or familial group.1 Various African tribes shared in the area of kinship an intra-tribal sense of collective unity and adopted the philosophy 'we are; therefore I am.'2 Consequently, an individual was nobody because the self was defined in relationship to others. One was a son, a daughter, a parent, or a grandparent, and had a large or small place in the village. One was known in relationship to others and shared the reputation of kin. A wastrel or cowardly brother was one's own shame; a relation who brought glory to himself was one's own pride; and the kinsman whose name one shared carried force and qualities of others.3 Each person was linked through family to others in the village so that, to the West African mind, the village became the family writ large.4 Huggins' description of the sixteenth-century family life typical of West Africans stated: You would have yourself centered in your mother's house with her other children, your brother and your sister. Most likely, there would be near at hand women like your mother, the wives of your father, their children, your half brothers and sisters, like yourself from your father's seed. At the core of the Universe would stand your father. There would be a senior wife who stood above the other women in authority. Then there would be the co-wives with your mother and all the children ranging in age from infancy to adulthood.5 In this kind of compound, the familial network of relationships extended outward to encompass uncles and aunts, cousins, nieces, and nephews. In addition, the compound often housed other individuals, slaves captured in war who worked in the family interest but were allowed to enter the family through marriage.6 From West African history we learn several things about kinship patterns that existed within the socio-cultural and ethnic framework of the ancestors of African-Americans. In the first place, there was a strong sense of family. It was a force so powerful that one's personal identity was determined by it. Second, this familial identity was intergenerational and multigenerational. Third, the black male occupied a prominent role in the family, which carried the veneration of spouse and offspring. This, then, was the socio-cultural orientation that the people of West Africa brought with them on slave ships to America. Notwithstanding, a controversial question still remains: did the descendants of West Africans brought to the United States continue the kinship patterns under which their predecessors were socialized? There is evidence that vestiges of West African culture remained part of the social fabric of blacks in America. Black Family Kinship Patterns The belief that residues of West African culture survived and remained part of the cultural scheme of blacks is referred to as the Africanity theory. There is credibility to this theory based on evidence of afroisms found among the blacks of North America, the Caribbean, and some parts of South America. These afroisms are used in art, music, religion, and kinship relations of these regions.7 Concerning kinship, the work of Gutman has shown that black families exhibited amazing survival resilience in the face of adverse conditions. Gutman examined documents and census data that had accumulated between 1750 and 1925 and discovered most black homes were two-parent homes and that a strong kinship network remained intact. His research refuted the myth of the matriarchal black family wherein domineering black women headed single-parent homes in the absence of black men. The evidence suggests that blacks did maintain a strong sense of family kinship in spite of that peculiar institution known as slavery. Notes 1 Nathan Huggins, Black Odyssey: The Afro-American Ordeal in Slavery (New York: Vintage Books, 1985), 1--24. 2 Ibid. 3 Ibid. 4 Ibid., 14--16. 5 Ibid., 21-22. 6 Ibid. 7 Ibid.

Healing the Wounded Heart: The Heartache of Sexual Abuse and the Hope of Transformation
Dan Allender
Paperback