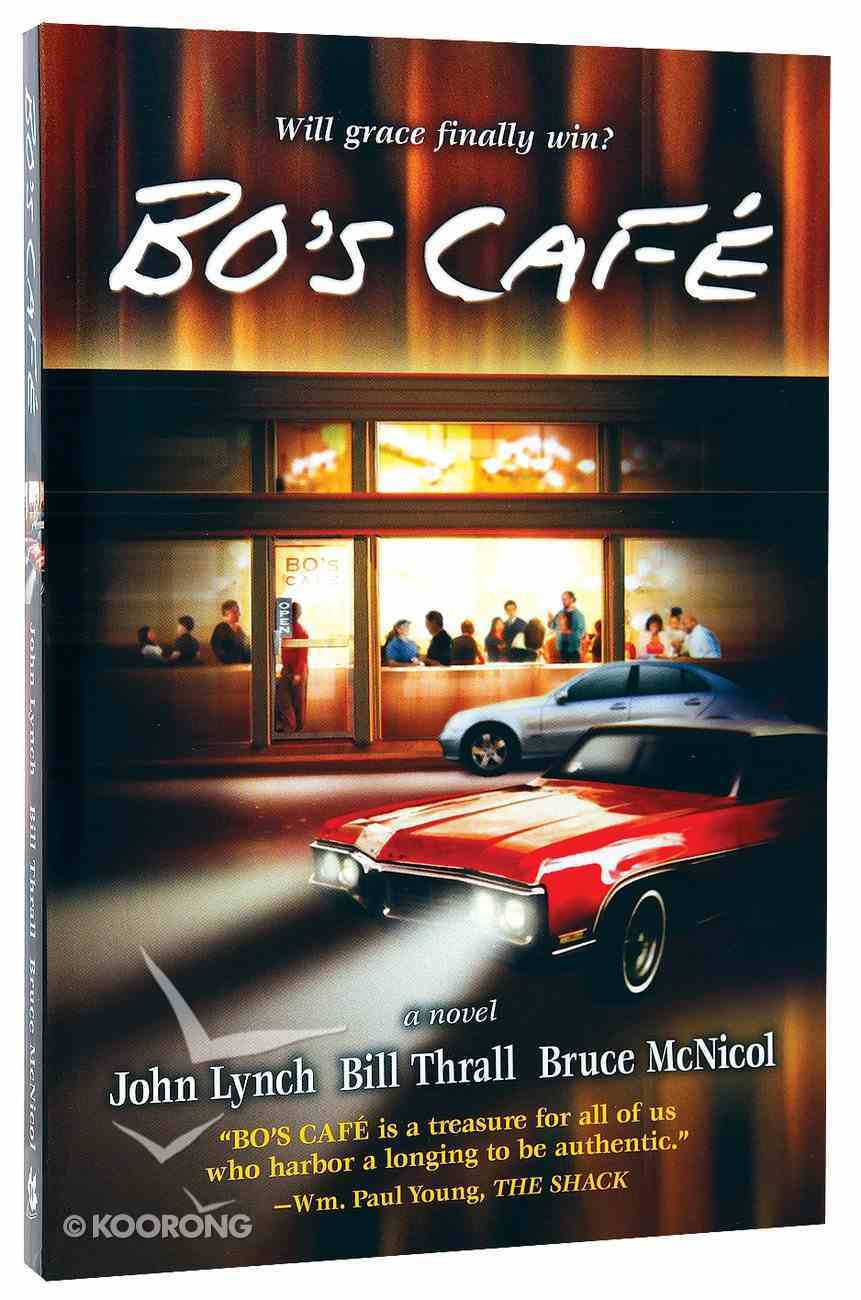 High-powered Stephen Kerner has no idea his tightly wound American dream is about to come crashing down. His high-profile, high-octane life has always provided everything he's wanted. Or so he thought. When his unresolved anger threatens his marriage,...

High-powered Stephen Kerner has no idea his tightly wound American dream is about to come crashing down. His high-profile, high-octane life has always provided everything he's wanted.

Or so he thought.

When his unresolved anger threatens his marriage, and his attempts to fix it only drive the one he loves farther away, he is pushed to the brink. An invitation from mystery man Andy Monroe may be the greatest hope Steven has ever been handed.
Back cover.


Welcome. You've walked into Bo's Cafe. Pull up a chair and stay as long as you like (or until Bo asks you to up and leave). Every now and then we stumble upon a place that feels different. You might find it on a trip out of town or sometimes it might be a place you discover right in your own neighborhood. The place kind of sneaks up on you. Maybe it's the music, or the upstairs deck, or the smell of good food. Something about it feels safe, real, fun, alive, authentic, unrehearsed, true. You stumble into conversations and in very little time feel like you're becoming known. Or you can sit off in the corner with a nice drink and just be there, talking to no one until you're ready. The place is almost always comfortably full, but rarely crowded. And there's laughter. Not that obnoxious drunken laughter of lonely bravado, but the laughter of friends enjoying each other. You eventually get a sense that no matter what you tell these friends, they are going to care for you more, not less. But hey, we're getting our socks on over our boots here, aren't we? You'll figure out that out over time at Bo's. Nobody needs to tell you.

There are some regulars here. They're right over there, in the middle of the deck crowd. Carlos, Cynthia, Hank, Andy. Sometimes Steven and Lindsey show up. Scattered around the deck you got your doctors and lawyers. There's a sheet metal guy, a city council member, a couple of plumbers. Tech nerds chillin' with hospital workers. Shop owners, students from all over town.

And there's Bo himself, the owner of this restaurant! No matter what you order he'll tell you he's giving you 5-day old carp. It's his own running joke. Don't let his insults, intimidating size and booming Cajun voice scare you off. He's one of the most real and kind people you'll ever meet.

Well, wander around the site, until you've found what you're looking for. There are conversations going on in several rooms. On the deck itself they don't even mind if you enter in. Soon you'll be a regular. You'll see.

Bruce McNicol is president of Leadership Catalyst, Inc. and an international speaker and consultant. He holds a master's in theology and a doctorate in organizational and leadership development. Previously he served for ten years as president of the international church planting organization Interest Associates. Bill Thrall serves as vice-chair of Leadership Catalyst, mentor, and coauthor of the bestselling TrueFaced resources ( www.truefaced.com ),The Ascent of a Leader,andBeyond Your Best. John Lynch is a national conference speaker and writer for LCI, holds a master's of theoology from Talbot Seminary, and has twenty years' experience as a teaching pastor of Open Door Fellowship. He's also cofounder and playwright of a theater troupe in Phoenix .
-Publisher

High-powered executive Steven Kerner is living the dream in southern California. But when his bottled pain ignites in anger one night, his wife kicks him out. Then an eccentric mystery man named Andy Monroe befriends Steven and begins unravelling his tightly wound world. Andy leads Steven through a series of frustrating and revealing encounters to repair his life through genuine friendship and the grace and love of a God who has been waiting for him to accept it. A story to challenge and encourage, BO'S CAFE is a model for all who struggle with unresolved problems and a performance-based life. Those who desire a fuller, more authentic way of living will find this journey of healing a restorative exploration of God's unbridled grace.
-Publisher

JOHN LYNCH is a national speaker for Leadership Catalyst, Inc. John is also the teaching pastor at Open Door Fellowship and coleads Sharkey Productions, a drama outreach in Phoenix. An award-winning playwright and storyteller, he lives in Phoenix with his wife and three children.