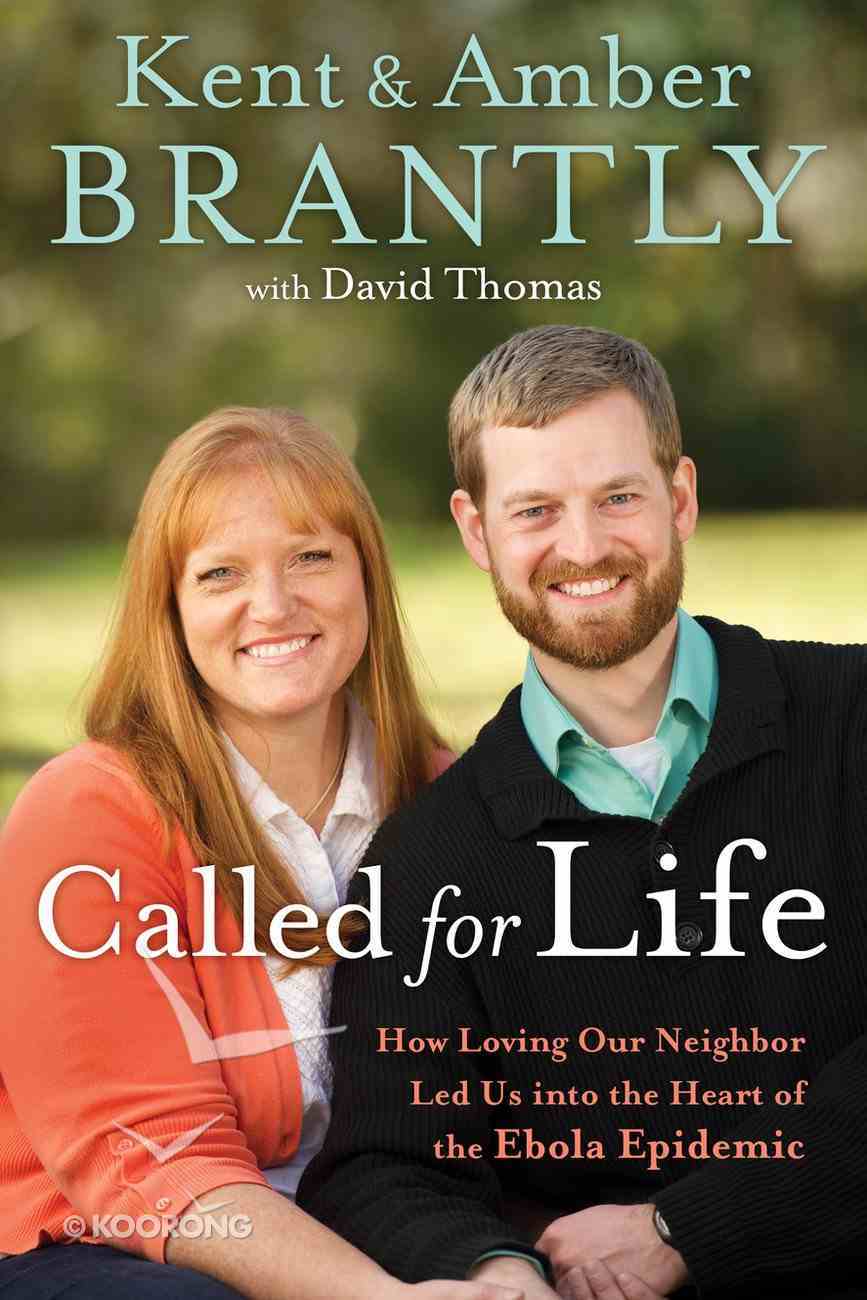 :"Kent, bud. We got your test result. And I'm really sorry to tell you that it is positive for Ebola." Dr. Kent and Amber Brantly moved with their children to war-torn Liberia in the fall of 2013...

Called Out: Why I Traded Two Dream Jobs For a Life of True Calling
Paula Faris
Paperback

:"Kent, bud. We got your test result. And I'm really sorry to tell you that it is positive for Ebola."

Dr. Kent and Amber Brantly moved with their children to war-torn Liberia in the fall of 2013 to provide medical care for people in great need-to help replace hopelessness with hope. When, less than a year later, Kent contracted the deadly Ebola virus, hope became what he and Amber needed too.

When Kent received the diagnosis, he was already alone and in quarantine in the Brantly home in Liberia. Amber and the children had left just days earlier on a trip to the United States. Kent's personal battle against the horrific Ebola began, and as thousands of people worldwide prayed for his life, a miraculous series of events unfolded.

Called for Life tells the riveting inside story of Kent and Amber's call to serve their neighbors, as well as Kent's fight for life with Ebola and Amber's' struggle to support him from half-a-world away. Most significantly, Called for Life reminds us of the risk, the honor, and the joy to be known when God and others are served without reservation.

Amber Brantly, an alumnus of Abilene Christian University, is a registered nurse. She is married to Dr Kent Brantly and together they are the parents of two young children. They are living temporarily in the United States with the intention of resuming their international medical mission service in the near future.

DR. KENT BRANTLY is family medicine physician who in 2013 accepted a post-resident position with World Medical Mission (a ministry of Samaritan's Purse) to serve at the ELWA Hospital in Monvovia, Liberia. In July of 2014, Kent contracted the Ebola virus, and his treatment and subsequent recovery became an international news story. He is a graduate of Abilene Christian University in Texas and received his degree in medicine from Indiana University. In fall of 2014, Kent testified on the Ebola crisis in West Africa before both houses of the US Congress, and later that year he was honoured by Time Magazine as a "Person of the Year."

:Update for the Paperback Edition
&#160;
Liberia was declared Ebola free by the World Health Organization on Janu&shy;ary 14, 2016&mdash;for the third time. We are thankful this outbreak has come to an end, but much work remains to be done.
&#160;
There are more than seventeen thousand Ebola survivors in West Africa. ELWA hospital is currently one of four centers in Monrovia providing health care for Ebola survivors, helping to manage the lingering effects of the disease and helping the survivors to rebuild their lives in the midst of continuing stigma and rejection by many parts of society. In addition to the huge number of survivors, there are also thousands of individuals widowed or orphaned by Ebola. The gov&shy;ernments of West Africa are struggling to find ways to care for these innocent victims.
&#160;
Samaritan&rsquo;s Purse continues construction on a new hospital at ELWA, pro&shy;jected to open by the end of summer 2016. (To learn more about this project, visit SamaritansPurse.org.) Work also continues in the development of methods for the prevention and treatment of Ebola Virus Disease.
&#160;
In the time since the initial release of this book, many opportunities have been granted us to share our story before national and international leaders, aid workers, health-care professionals, college students, and faith groups. This has taken us around the globe, but perhaps the most meaningful journey of all was the trip our family took back to Liberia.
&#160;
In June 2015, the four of us made the long journey over the ocean to visit old friends and see familiar places in Liberia. The time was too short, but the experi&shy;ence brought healing and closure to an intense chapter in our family&rsquo;s story.
&#160;
We listened to our friends and coworkers tell how they have been affected by the Ebola outbreak. It was heart wrenching to see the pain in their faces as they recounted the stories of family members who had suffered and died in the Ebola treatment unit. We were struck by how grateful they all seemed to be, despite the circumstances and their deep grief; they all thanked God for getting them through.
&#160;
We may never again live in our little house on the beach at ELWA, but we have been forever changed by our experiences and relationships there.
&#160;
Kent has since reentered full-time medical practice in Fort Worth, Texas. He is working in the hospital system where he trained, taking care of patients and teaching family-medicine residents in advanced obstetrical care.
&#160;
Amber volunteers in our children&rsquo;s school and for World Relief Fort Worth as it helps to resettle refugees in new homes. She is also involved with women&rsquo;s min&shy;istries at our home church.
&#160;
Some of the proceeds from the sale of this book have been given to the Pan-African Academy of Christian Surgeons in memory of Dr. Sarah Lantz. Dr. Lantz was Kent&rsquo;s medical-school classmate and a fellow Samaritan&rsquo;s Purse Post-Resident physician who worked in Zambia from January 2014 to August 2015, when she was diagnosed with stage IV breast cancer. She fought a courageous battle before she died on January 13, 2016. To learn how you can contribute to this endowed scholarship program for training African surgeons, please visit PAACS.net.
&#160;
We continue to seek opportunities to love our neighbors where we are and are currently engaged in preparations for working overseas again. Though this Ebola outbreak is now part of history, the lessons learned through that crisis are still with us. There will be other disease outbreaks and other international disasters, such as the earthquakes in Nepal, the war in Syria, and the refugee crisis in the Middle East. And in all these situations, we must remember the lessons we learned through these events: we must choose compassion over fear.
&#160;
Prologue
So What&rsquo;s Next?

Kent, bud. We got your test result. And I&rsquo;m really sorry to tell you that it is positive for Ebola.&rdquo;
&#160;
I had not expected to hear those words despite the mounting evidence over the past three days&mdash;the worsening symptoms, the repeated negative malaria tests&mdash;that would have led me to suspect Ebola had I been the doctor rather than the patient.
&#160;
Our first Ebola patient had come to our hospital in Monrovia, Liberia, barely six weeks earlier. But we had worked under the strain of a looming Ebola outbreak for nearly three anxious months before then. For the thirty-eight years since Ebola Virus Disease had been identified, every outbreak had been limited to small rural communities.
&#160;
This time, however, was different. This time, Ebola had found the perfect storm of factors, quickly spreading through three countries and into major urban centers.
&#160;
Our hospital of forty-five to fifty beds hurriedly converted the chapel into a small isolation unit, hoping it would never be needed. When our first Ebola pa&shy;tient arrived, we maintained the only treatment unit in all of southern Liberia.
&#160;
In the beginning stages of what erupted into the worst Ebola outbreak the world has ever seen, I had learned to consider Ebola anytime a patient entered our emergency room with a fever and symptoms that, just a few months earlier, would have been suspected as likely malaria or typhoid fever. In fact, for the safety of our medical workers, we treated all febrile patients as though they had Ebola until proven otherwise. It was too risky not to.
&#160;
The Ebola strain we observed carried a mortality rate of 70 percent. The death rate was even higher in our hospital, where only one of the dozens of patients who had tested positive for Ebola had survived.
&#160;
One.
&#160;
Ebola didn&rsquo;t just kill our patients; it stripped them of their dignity. Ebola hu&shy;miliated its victims by taking away control of their bodily functions. We con&shy;stantly changed diapers and sheets and cleaned up patients, and we fed them when they could no longer do so themselves.
&#160;
Unable to cure their disease, we focused on treating their sense of isolation that came from being in a treatment unit where only two groups of people were allowed inside. One group was the medical personnel always working with their own safety in the front of their minds in light of the disproportionate number of health-care workers contracting the disease. The second group was other Ebola patients, moaning and groaning in pain until their bodies could fight no longer.
&#160;
For all but that one patient, a positive Ebola test had become a death sentence served out among suffering patients and cautious medical personnel&mdash;some un&shy;known foreigners, even&mdash;outfitted so securely that only our eyes were visible through the protective goggles.
&#160;
No families. No friends. No familiar faces. No human contact.
&#160;
With no cure, no hope.
&#160;
As the outbreak had worsened and our hospital worked to expand our capac&shy;ity, I was named director of the treatment unit. I became the physician who en&shy;sured that our staff was properly trained, repeatedly reassuring them that when we followed the protocols and worked together as a team, we were completely safe. The staff had trusted me too, because for each of my patients, I had determined to display compassion over fear.
&#160;
And now Dr. Lance Plyler, the team leader responsible for managing our medical response to Ebola, was standing outside my bedroom window, because he could not come into my contaminated home, notifying me that I, too, had contracted the virus. Dr. John Fankhauser, my colleague and mentor in Liberia for nine busy months, stood beside my bed dressed in full personal protective equip&shy;ment (PPE), just as I had stood beside the beds of too many patients in our Ebola unit, because he wanted to be with me when Lance delivered the news.
&#160;
&ldquo;I really wish you hadn&rsquo;t said that,&rdquo; I told Lance.
&#160;
I was so sick at that point that I don&rsquo;t remember saying those words; that is Lance&rsquo;s recollection of my reaction. But I do remember what I said immediately after.
&#160;
&ldquo;Okay, so what is next? What&rsquo;s our plan? What are we going to do?&rdquo;
&#160;
I am a doctor, trained to respond to a bad test result by creating a plan. More importantly, I am a husband and a father, and my thoughts turned to my beautiful wife and children back home in the United States. I might not see them, much less touch them, ever again.
&#160;
I stared out our bedroom window, looking to Lance.
&#160;
&ldquo;How am I going to tell Amber?&rdquo;