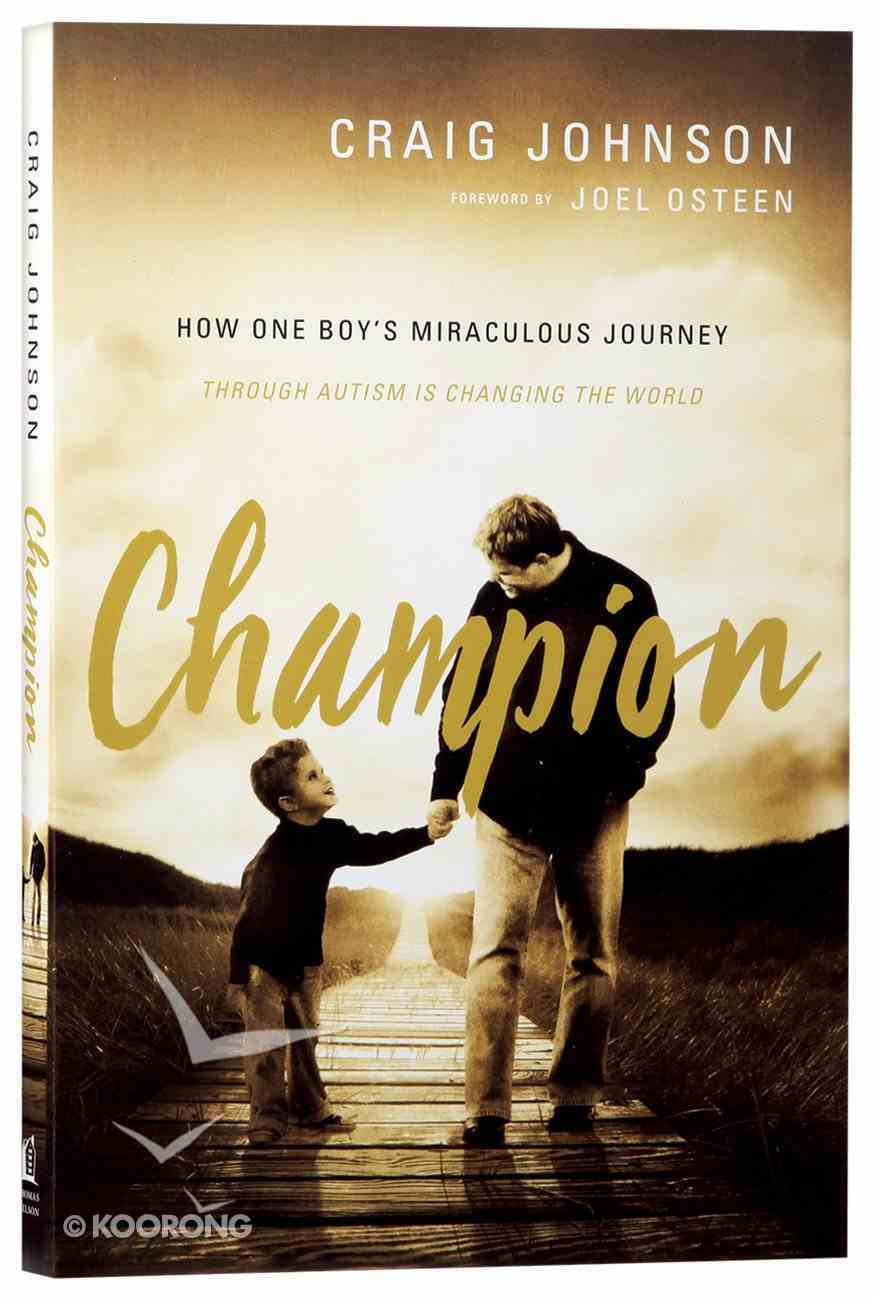 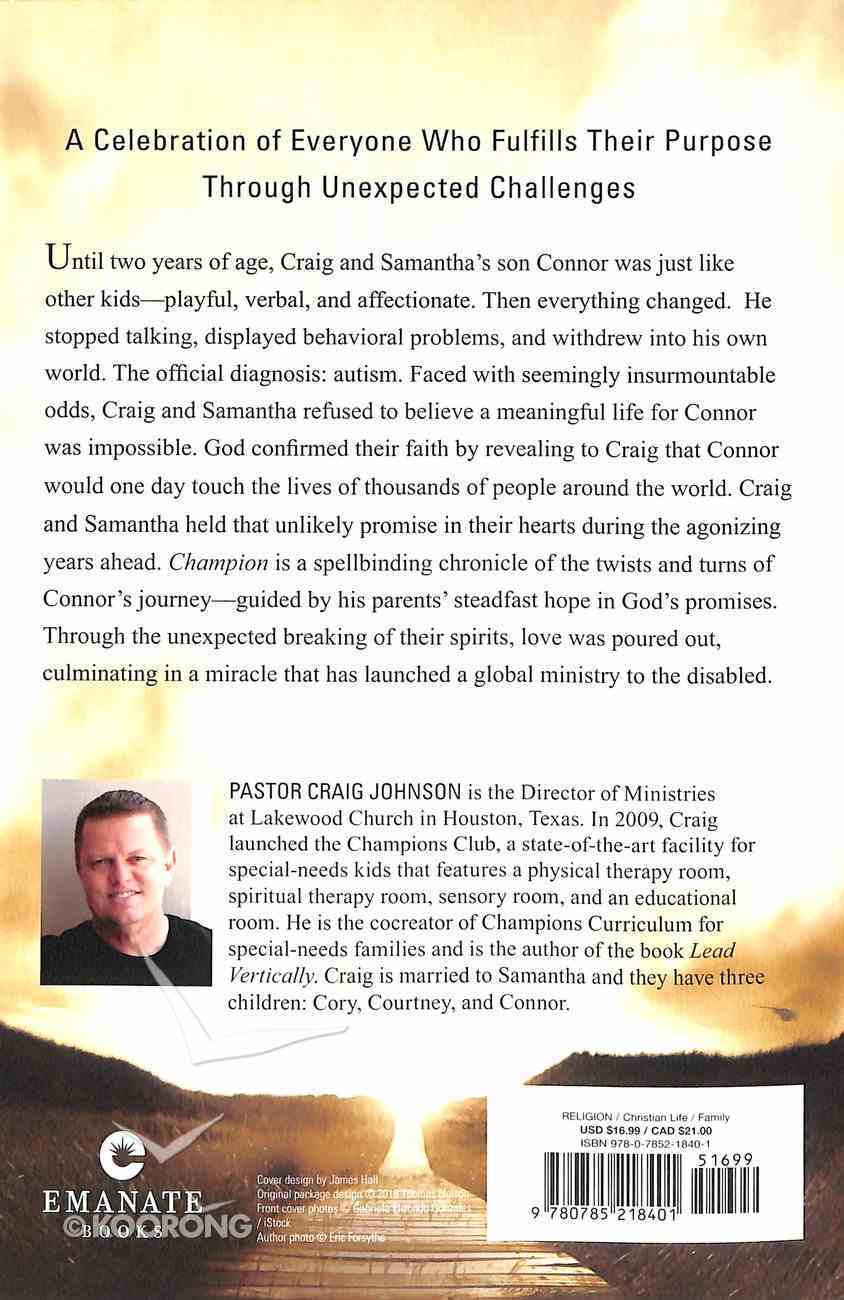 Champion: How One Boy's Miraculous Journey Through Autism is Changing the World

Pastor Craig Johnson shares the heartwarming story of how his family and church have nurtured his autistic youngest child, Connor. The Johnsons' faith-filled response to Connor's diagnosis has brought fresh hope to familes of special needs children around the world!...

16 available
Expected to ship within 5 hours from Australia.
Learn More
Free Shipping
for orders over $99.

Answers For the 4-A Epidemic
Joseph A Cannizzaro
eBook

It's Okay About It
Lauren Casper
Paperback

Pastor Craig Johnson shares the heartwarming story of how his family and church have nurtured his autistic youngest child, Connor. The Johnsons' faith-filled response to Connor's diagnosis has brought fresh hope to familes of special needs children around the world!

:
Even on your worst day, you may become someone else's best hope.


When Pastor Craig and Samantha Johnson moved to Houston to take a position at Lakewood Church, they thought they had it made. Two kids, a great job, a beautiful home, and a solid plan for the future. Their dream, however, was interrupted by the unplanned arrival of a third child, Connor.


Connor grew to become a normal, healthy toddler. When he turned two, however, something changed. He stopped talking, displayed behavioral problems, and was no longer the cheerful, engaged little boy they had known. No one seemed to have answers until the official diagnosis was handed down-autism.


Faced with seemingly insurmountable odds-a child who could not speak or respond with emotion-the Johnsons were filled with unanswered questions and deep sorrow. God quietly spoke to Craig's heart, telling him Connor's story would one day touch the lives of thousands of people around the globe. Craig and Samantha held that unlikely promise in their hearts during the years ahead. They accepted the diagnosis, but refused to believe their story was over. God was not finished with the Johnson family.


The Johnsons resolved to love their son with everything they had, no matter what. While Samantha watched over Connor's daily needs, Craig began to search the Scriptures for promises from God, Bible verses they could all cling to. They made sure Connor did not miss Pastor Joel Osteen's Sunday morning services and, over time, Craig and Samantha developed a long list of positive verses designed to instill a daily dose of faith, hope, and love into their family.


Then, one day, a miracle occurred.


Instantly flooded with a variety of emotions, the Johnsons rejoiced. Their boy could talk. And not only talk but perform a perfect recitation of Pastor Joel Osteen's opening affirmation: "This is my Bible, I am what it says I am ..."


Today Connor is a vibrant young man, and his family's faith-filled response to his diagnosis has launched a worldwide wave of support and attention for special needs children of all stripes. Connor's life has truly touched the world.


Written with transparency and humor, Champion will inspire those in the middle of an unexpected trial to rise up and become someone's champion.

Pastor Craig Johnson is the Senior Director of Family Ministry at Joel Osteen's Lakewood Church, in Houston, Texas. Craig developed a ministry in 2008 for families with special needs children. Champions Club became the dream and desire of Lakewood Church to help families with special needs children. Champions Clubs have expanded throughout the United States and in countries around the world. Their team offers help through consultation, training, fundraising, and speaking to help churches, schools and organizations launch their own special needs program email. Craig is married to Samantha. They have three children and live in Houston.