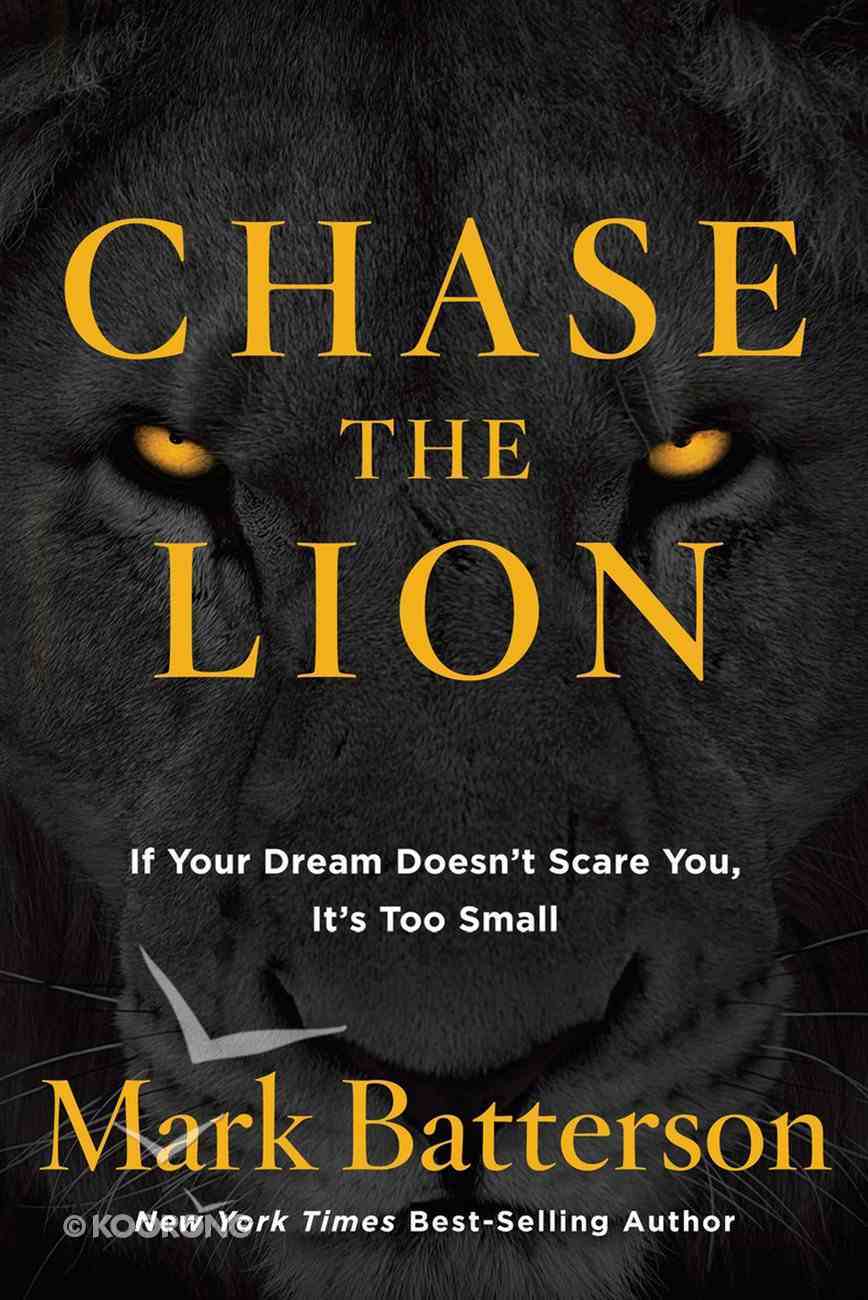 Chase the Lion: If Your Dream Doesn't Scare You, It's Too Small

:In this compelling manifesto, New York Times bestselling author Mark Batterson challenges readers to chase the lions in their lives and to be prepared to act accordingly when they catch them! This NEW work from Batterson will release parallel to...

11 available
Expected to ship within 14 hours from Australia.
Learn More
Free Shipping
for orders over $99.

Double Blessing: How to Get It. How to Give It
Mark Batterson
Paperback

The Power of If
Mark Batterson
eBook

If: Trading Your If Only Regrets For God's What If Possibilities
Mark Batterson
Paperback

:In this compelling manifesto, New York Times bestselling author Mark Batterson challenges readers to chase the lions in their lives and to be prepared to act accordingly when they catch them! This NEW work from
Batterson will release parallel to the repackage of Batterson's massively successful In a Pit with a Lion on a Snowy Day. Chase is a thematic sequel to In a Pit.

With grit and gusto, In a Pit with a Lion on a Snowy Day, described how our outlook can help determine our outcome in life. Batterson encouraged readers to think differently about their dreams (and to dream bigger!) and the book became a bestseller. In Chase the Lion, the author encourages people to take bold actions
to accomplish their goals, follow his practical steps to making those goals a reality, and bravely plan for what comes after accomplishment. This is the logical next step. Once you've defied the odds, faced your fears, and crafted audacious dreams for your life--the only thing left to do is to follow God's leading and act boldly. In demonstrating how this can be done, Batterson will share inspiring stories from Scripture and from real life.

This primer for the chase of our lives will inspire readers young and old to plan for success and go further than they every imagined they could.
-Publisher

Chasing a lion into a pit on a snowy day takes two-o&rsquo;clock-in-the- morning courage. But that one act of courage completely changed the tra- jectory of Benaiah&rsquo;s life. The same is true of you. You are one idea, one risk, one decision away from a totally different life. Of course, it&rsquo;ll probably be the toughest decision you ever make, the scariest risk you ever take. But if your dream doesn&rsquo;t scare you, it&rsquo;s too small.
&#160;
Scripture doesn&rsquo;t explain what Benaiah was doing or where he was going when he crossed paths with the lion. We don&rsquo;t know the time of day or his frame of mind. But it does reveal his gut reaction, and it was gutsy.
&#160;
Put yourself in Benaiah&rsquo;s sandals.
&#160;
Your vision is obscured by falling snow and frozen breath. Out of the corner of your eye, you detect movement. Pupils dilate. Muscles flex. Adren- aline rushes. It&rsquo;s a prowling lion stalking its prey&mdash;you.
&#160;
In the wild, man versus lion scripts the same way every time. Man runs; lion chases; king of the beasts eats manwich for lunch. But Benaiah flips the script. That&rsquo;s what courage does! I don&rsquo;t know if it was the look in his eye or the spear in his hand, but the lion turns tail and Benaiah gives chase.
&#160;
A fully grown lion can run thirty-six miles per hour and leap thirty feet in a single bound. Benaiah doesn&rsquo;t stand a chance, but that doesn&rsquo;t keep him from giving chase. He can&rsquo;t keep pace, but he can track paw prints in the freshly fallen snow. He comes to the place where the ground has given way beneath the lion&rsquo;s five-hundred-pound frame. Benaiah peers into the pit. Yellow cat eyes glare back.
&#160;
It&rsquo;s a made-for-Hollywood moment. Imagine it on the silver screen.
&#160;
Benaiah walks away from the pit while moviegoers breathe a sigh of&#160;relief. But Benaiah isn&rsquo;t walking away; he&rsquo;s getting a running start. The audience gasps as Benaiah turns &#160;around and takes a flying leap of faith, disappearing into the darkness. A deafening roar echoes off the walls of the cavernous pit, followed by a bloodcurdling battle cry.
&#160;
Then silence, dead silence.
&#160;
No one is eating popcorn at this point.
&#160;
Everyone expects the lion to strut out, shaking its mane. But no. A&#160;human form reaches up and climbs out of the pit. Drops of blood color the&#160;snow crimson. Claw marks crisscross Benaiah&rsquo;s spear arm. But against all odds, the valiant warrior from Kabzeel earns an epic victory.
&#160;
Closing credits roll.
&#160;
Then, if I&rsquo;m producing the film, there is a postcredit scene like in the&#160;Marvel superhero movies&mdash;Benaiah&rsquo;s cage fight with a giant Egyptian.