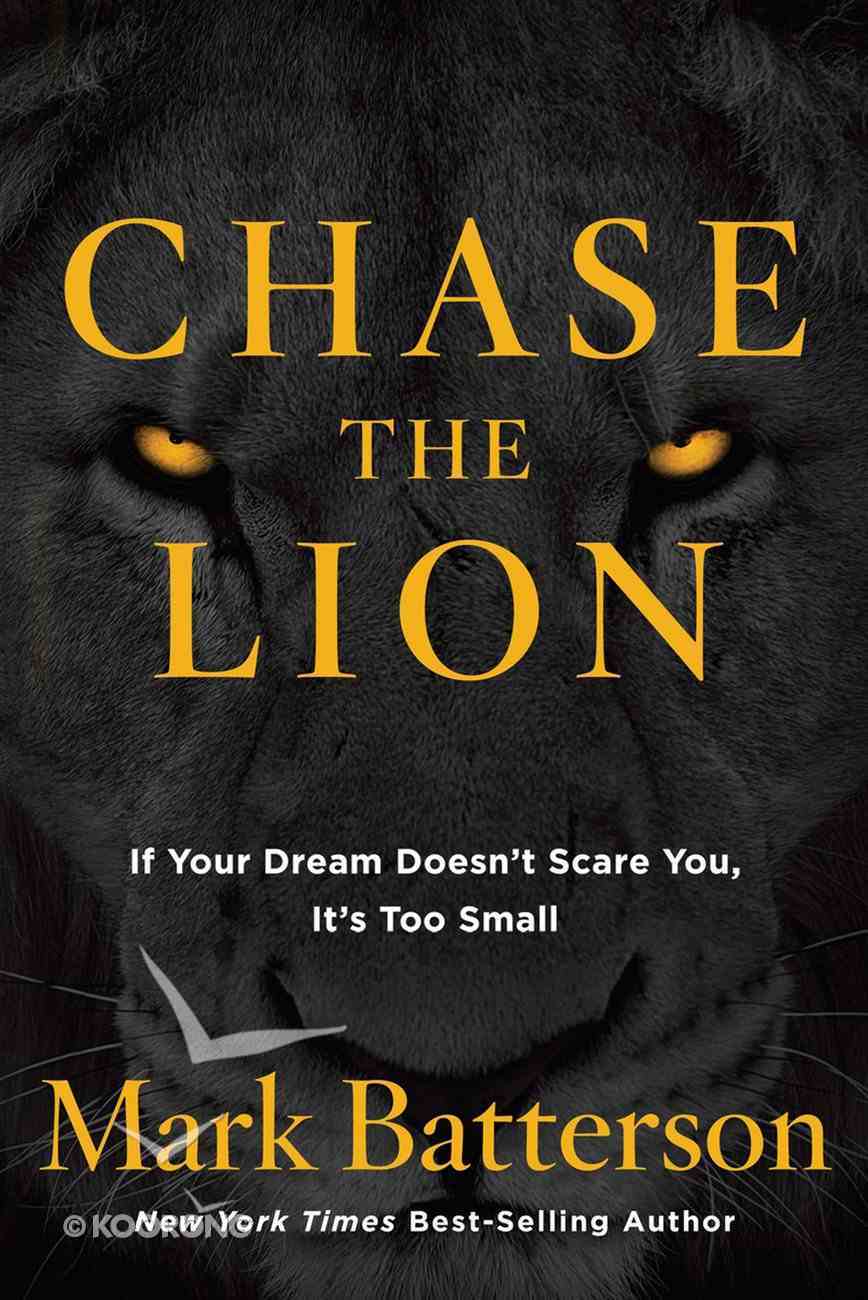 In this highly anticipated sequel to his best-selling In a Pit with a Lion on a Snowy Day , Mark Batterson invites lion chasers everywhere to chase dreams so impossible that victory demands we face our fears, defy the odds,...

The Power of If
Mark Batterson
eBook

A Trip Around the Sun
Mark Batterson
eAudio

If: Trading Your If Only Regrets For God's What If Possibilities
Mark Batterson
Paperback

Double Blessing: How to Get It. How to Give It.
Mark Batterson
Hardback

Chase the Lion: If Your Dream Doesn't Scare You, It's Too Small
Mark Batterson
Paperback

In this highly anticipated sequel to his best-selling In a Pit with a Lion on a Snowy Day, Mark Batterson invites lion chasers everywhere to chase dreams so impossible that victory demands we face our fears, defy the odds, and hold tight to God.

"Creative. Inspiring. Challenging. Batterson's writings always leave us encouraged, and Chase the Lion is no exception. If you feel as if life has caused you to shrink the size of your dreams, this book is for you!"
-Louie Giglio, pastor of Passion City Church, founder of Passion Conferences, and author of The Comeback

"Mark Batterson reminds us to trust in the powerful truth that with God we don't have to let our thinking be limited. By obeying Him, we let our growing faith push us to dream big and lean in ever closer to Him without fear or hesitation. It's time to trust in our God, who allows us to accomplish things that seem bigger than we could ever imagine!"
-Craig Groeschel, pastor of Life.Church and author of #Struggles: Following Jesus in a Selfie-Centered World

"We seek out community in everything we do-and our dreams should be no different. In Chase the Lion, Batterson reminds us to come together, share our dreams, and chase after them. And in doing so, we become not only dream chasers but dream catchers for the others in our pride."
-Steven Furtick, pastor of Elevation Church and New York Times best-selling author

:Run TO the Roar!

When the image of a man-eating beast travels through the optic nerve and into the visual cortex, the brain sends the body a simple but urgent message: run away! That's what normal people do, but not lion chasers. Rather than seeing a five hundred pound problem, they see an opportunity for God to show up and show His power..

Chase the Lion is more than a catch phrase; it's a radically different approach to life. It's only when we stop fearing failure that we can fully seize opportunity by the mane. With grit and gusto, New York Times bestselling author Mark Batterson delivers a bold message to everyone with a big dream.

Quit playing it safe and start running towards the roar!

This is a wake-up call to stop living as if the purpose was to simply arrive safely at death. Our dreams should scare us. They should be so big that without God they are impossible to achieve. Quit running away from what you're afraid of.

Chase the lion!
Change the world!

What is Your Five Hundred Pound Dream?


In this highly anticipated sequel to his best-selling In a Pit with a Lion on a Snowy Day, Mark Batterson invites lion chasers everywhere to chase dreams so impossible that victory demands we face our fears, defy the odds, and hold tight to God.

These are the kind of dreams that will make you a bigger person and the world a better place.

Based upon II Samuel 23, Chase the Lion tells the true story of an ancient warrior named Benaiah who chased a lion into a pit on a snowy day-and then killed it. For most people, that situation wouldn't just be a problem&...it would be the last problem they ever faced. For Benaiah, it was an opportunity to step into his destiny. After defeating the lion, he landed his dream job as King David's bodyguard and eventually became Commander-in-Chief of Israel's army under King Solomon.

Written in a way that both challenges and encourages, this revolutionary book will help unleash the faith and courage you need to identify, chase, and catch the five hundred pound dreams in your life.
-Publisher

Chasing a lion into a pit on a snowy day takes two-o&rsquo;clock-in-the- morning courage. But that one act of courage completely changed the tra- jectory of Benaiah&rsquo;s life. The same is true of you. You are one idea, one risk, one decision away from a totally different life. Of course, it&rsquo;ll probably be the toughest decision you ever make, the scariest risk you ever take. But if your dream doesn&rsquo;t scare you, it&rsquo;s too small.
&#160;
Scripture doesn&rsquo;t explain what Benaiah was doing or where he was going when he crossed paths with the lion. We don&rsquo;t know the time of day or his frame of mind. But it does reveal his gut reaction, and it was gutsy.
&#160;
Put yourself in Benaiah&rsquo;s sandals.
&#160;
Your vision is obscured by falling snow and frozen breath. Out of the corner of your eye, you detect movement. Pupils dilate. Muscles flex. Adren- aline rushes. It&rsquo;s a prowling lion stalking its prey&mdash;you.
&#160;
In the wild, man versus lion scripts the same way every time. Man runs; lion chases; king of the beasts eats manwich for lunch. But Benaiah flips the script. That&rsquo;s what courage does! I don&rsquo;t know if it was the look in his eye or the spear in his hand, but the lion turns tail and Benaiah gives chase.
&#160;
A fully grown lion can run thirty-six miles per hour and leap thirty feet in a single bound. Benaiah doesn&rsquo;t stand a chance, but that doesn&rsquo;t keep him from giving chase. He can&rsquo;t keep pace, but he can track paw prints in the freshly fallen snow. He comes to the place where the ground has given way beneath the lion&rsquo;s five-hundred-pound frame. Benaiah peers into the pit. Yellow cat eyes glare back.
&#160;
It&rsquo;s a made-for-Hollywood moment. Imagine it on the silver screen.
&#160;
Benaiah walks away from the pit while moviegoers breathe a sigh of&#160;relief. But Benaiah isn&rsquo;t walking away; he&rsquo;s getting a running start. The audience gasps as Benaiah turns &#160;around and takes a flying leap of faith, disappearing into the darkness. A deafening roar echoes off the walls of the cavernous pit, followed by a bloodcurdling battle cry.
&#160;
Then silence, dead silence.
&#160;
No one is eating popcorn at this point.
&#160;
Everyone expects the lion to strut out, shaking its mane. But no. A&#160;human form reaches up and climbs out of the pit. Drops of blood color the&#160;snow crimson. Claw marks crisscross Benaiah&rsquo;s spear arm. But against all odds, the valiant warrior from Kabzeel earns an epic victory.
&#160;
Closing credits roll.
&#160;
Then, if I&rsquo;m producing the film, there is a postcredit scene like in the&#160;Marvel superhero movies&mdash;Benaiah&rsquo;s cage fight with a giant Egyptian.