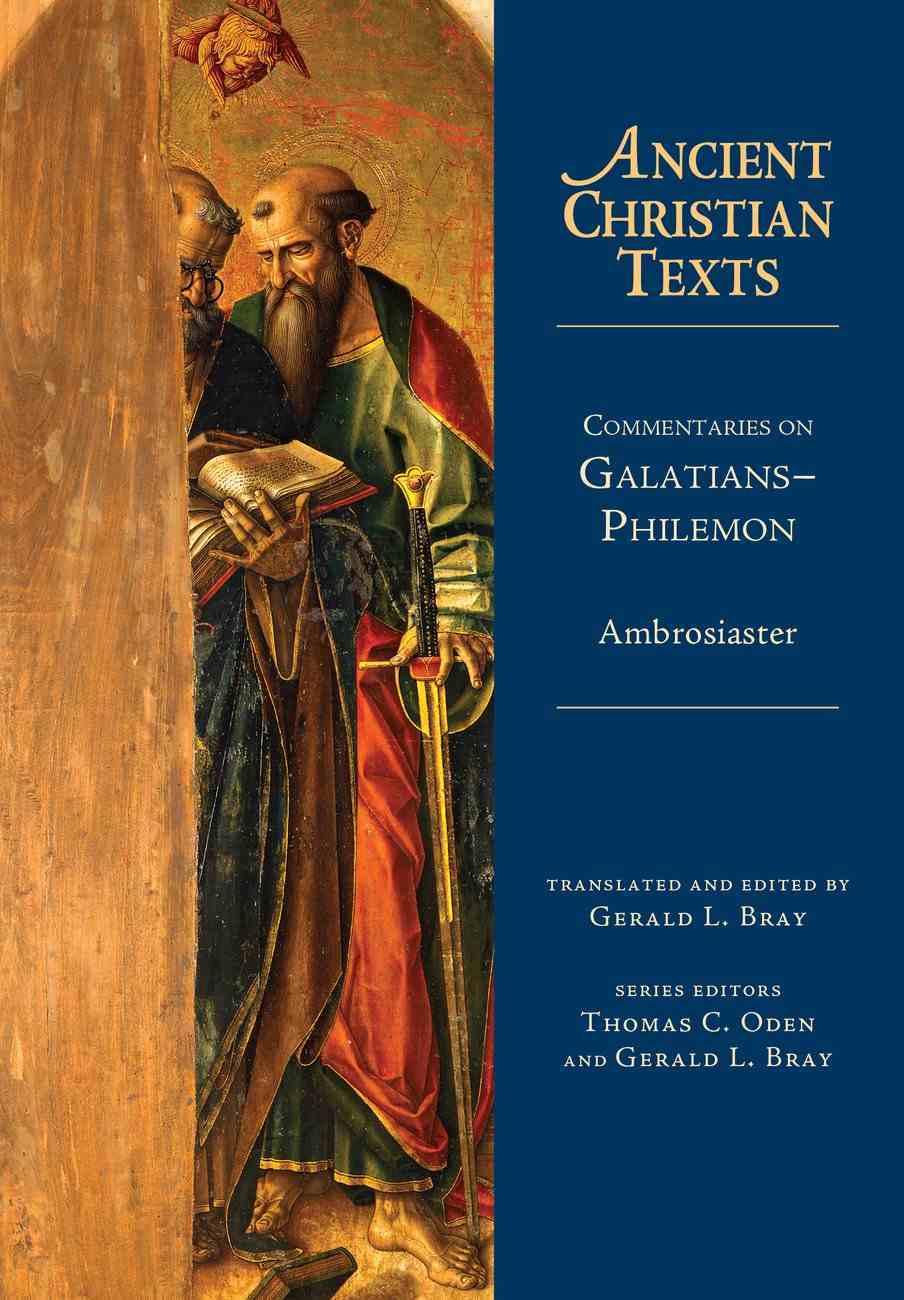 This ACT volume is the second of two volumes that will offer a first English translation of the anonymous fourth-century commentary on the thirteen letters of Paul. Widely viewed as one of the finest pre-Reformation commentaries on the Pauline Epistles,...

This ACT volume is the second of two volumes that will offer a first English translation of the anonymous fourth-century commentary on the thirteen letters of Paul. Widely viewed as one of the finest pre-Reformation commentaries on the Pauline Epistles, this commentary, until the time of Erasmus, was attributed to Ambrose. It was Erasmus who gave the author the epithet Ambrosiaster ("Star of Ambrose Provides first English translation of one of the finest pre-Reformation commentaris on Paul's Epistles ^Includes an introduction discussing authorship, text and translation, social and theological context of the commentary ^Provides a limited number of notes that identify biblical references or allusions, certain textual difficulties, and explanations of Ambrosiaster's possible errors ^Along with Romans and 1-2 Corinthinas, covers the whole of Paul's Epistles ^Second volume in series of full-length commentaries from the early church fathers, offering fresh, contemporary English translations
-Publisher.

Ambrosiaster ("Star of Ambrose") is the name given to the anonymous author of the earliest complete Latin commentary on the thirteen epistles of Paul. The commentaries were thought to have been written by Ambrose throughout the Middle Ages, but their authorship was challenged by Erasmus, whose arguments have proved decisive. The commentaries, which serve as important witnesses to pre-Vulgate Latin versions of Paul's epistles, are noteworthy in several respects. Ambrosiaster was a careful and thoughtful interpreter, who made little use of allegory, though he employed typology judiciously. Writing during the pontificate of Damasus (366-384), he is a witness to Nicene orthodoxy and frequently comments on themes related to the Trinity, the consubstantiality of the Son, the problem of the unbelief of the Jews and the nature of human sinfulness. He had a keen eye for moral issues and often offers comments that reflect his knowledge of how the church had changed from the time of the apostles to his own day. Here for the first time his commentaries on Galatians, Ephesians, Philippians, Colossians, 1-2 Thessalonians, 1-2 Timothy, Titus and Philemon are made available in English, ably translated and edited by Gerald L. Bray.
-Publisher

The name given to the author of a commentary on St. Pauls letters in the New Testament, long attributed to St. Ambrose (died 397), bishop of Milan. The work is valuable for the criticism of the Latin text of the New Testament.
In 1527 Erasmus expressed doubts that the work was written by Ambrose. His judgment was eventually accepted by scholars, and the author is generally called Ambrosiaster or Pseudo-Ambrosius. Since Augustine in the 4th century attributed some parts of the commentary on Romans to Sanctus Hilarius, the work has been ascribed by various scholars to almost every known Hilary.