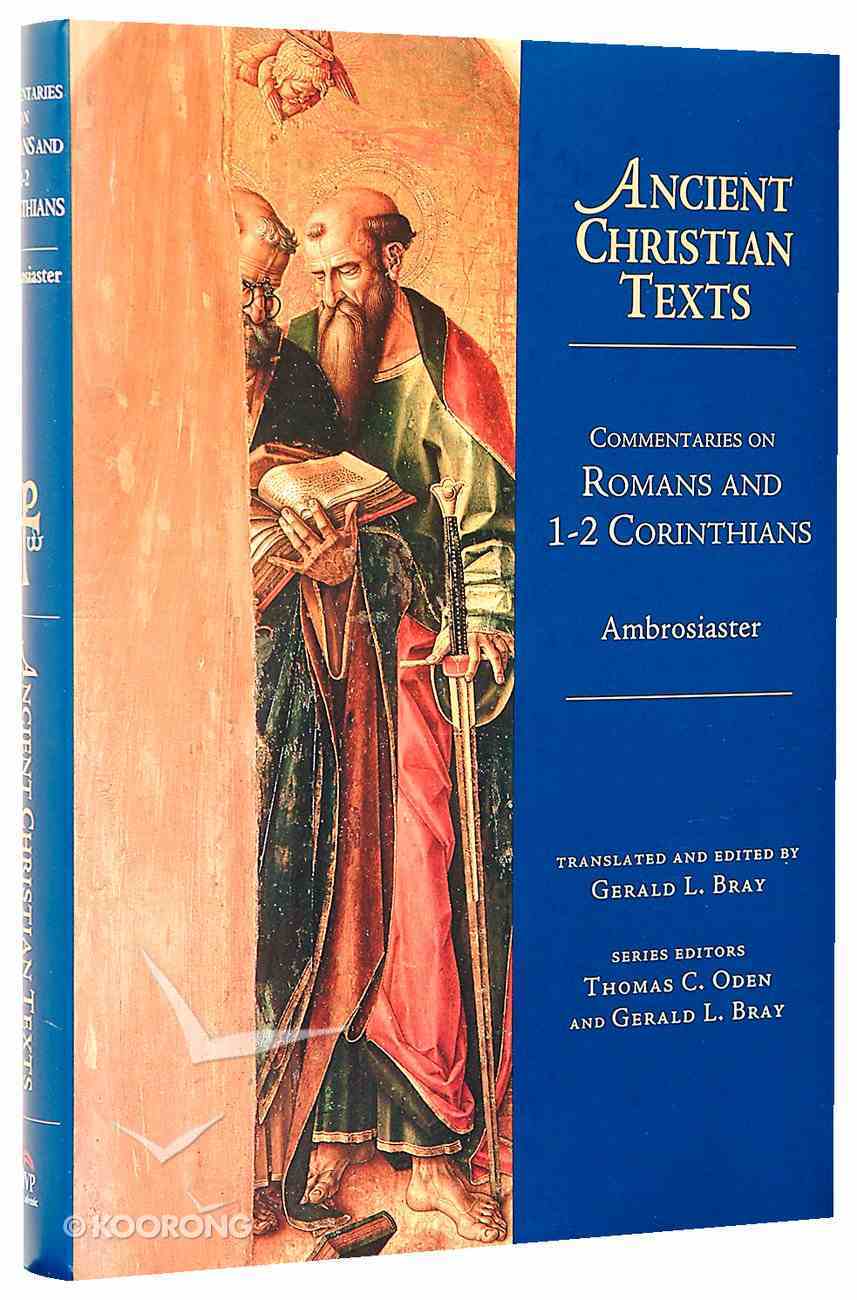 Paul's letters to the Corinthian church have left a mark on Christian Scripture in a way that could never have been predicted. Here the pastoral issues of a first-century Christian community in what Chrysostom identified as "still the first city...

Paul's letters to the Corinthian church have left a mark on Christian Scripture in a way that could never have been predicted. Here the pastoral issues of a first-century Christian community in what Chrysostom identified as "still the first city in Greece" stand out in bold relief. How was a community shaped by the cross to find its expression in a city that Chrysostom knew to be "full of orators and philosophers" and that "prided itself . . . above all on its great wealth"? How was church unity to be maintained in a setting where prominent believers, bending truth and morality to their own advantage, divided the body of Christ? Here lay the challenge for the apostle Paul. And as the apostle writes, the fathers lean over his shoulder, marveling and commenting on his pastoral wisdom.
^^Best known among these patristic commentators is Chrysostom, whose seventy-seven homilies on the two Corinthian epistles are a treasury of exposition and application. The fragmentary works of Didymus the Blind and Severian of Gabala give us samples of Greek exegesis from the Alexandrian and Antiochene schools. The partial work of Theodore of Mopsuestia, a commentator of great skill and insight, was long valued in the church. And the comments of Theodoret of Cyrus are notable for their sensitivity to the intertextuality of Scripture. Then there are Origen and Pelagius, whose names resonate with notable error, to the needless obscuring of their brilliant insights into Scripture. But pride of place goes to the unknown fourth-century commentator long mistaken for Ambrose and now dubbed "Ambrosiaster." His excellent commentary on 1 and 2 Corinthians has been unavailable in English translation, and for that reason it is excerpted more generously in this volume.


^^This Ancient Christian Commentary on 1-2 Corinthians opens a whole new way of reading these New Testament texts. The pastoral and theological interpretation of the fathers offers spiritual and intellectual sustenance to those who would read Paul again with open minds and hearts. Here we find the Pauline wisdom of the cross generating an effective heritage of Christian interpretation.
-Publisher.


This Ancient Christian Texts volume, translated and edited by Gerald L. Bray, is the first of two that will offer a first English translation of the anonymous fourth-century commentary on the thirteen letters of Paul. Widely viewed as one of the finest pre-Reformation commentaries on the Pauline Epistles, this commentary, until the time of Erasmus, was attributed to Ambrose. It was Erasmus who gave the author the epithet Ambrosiaster (Star of Ambrose).
-Publisher

Ambrosiaster ("Star of Ambrose") is the name given to the anonymous author of the earliest complete Latin commentary on the thirteen epistles of Paul. The commentaries were thought to have been written by Ambrose throughout the Middle Ages, but their authorship was challenged by Erasmus, whose arguments have proved decisive. Here for the first time Ambrosiaster's commentaries on Romans and the Corinthian correspondence are made available in English translation, ably translated and edited by Gerald L. Bray. The commentaries, which serve as important witnesses to pre-Vulgate Latin versions of Paul's epistles, are noteworthy in other respects as well. Ambrosiaster was a careful and thoughtful interpreter, with little use for allegory, though he employed typology judiciously. Writing during the pontificate of Damasus (366-384), he is a witness to Nicene orthodoxy and frequently comments on themes related to the Trinity, the consubstantiality of the Son, the problem of the unbelief of the Jews and the nature of human sinfulness. He had a keen eye for moral issues and often offers comments that reflect his knowledge of how the church had changed from the time of the apostles to his own day. This commentary offers a rich repository of insight into the thinking of pre-Reformation church leaders for the leaders and teachers of the church today.
-Publisher

The name given to the author of a commentary on St. Pauls letters in the New Testament, long attributed to St. Ambrose (died 397), bishop of Milan. The work is valuable for the criticism of the Latin text of the New Testament.
In 1527 Erasmus expressed doubts that the work was written by Ambrose. His judgment was eventually accepted by scholars, and the author is generally called Ambrosiaster or Pseudo-Ambrosius. Since Augustine in the 4th century attributed some parts of the commentary on Romans to Sanctus Hilarius, the work has been ascribed by various scholars to almost every known Hilary.