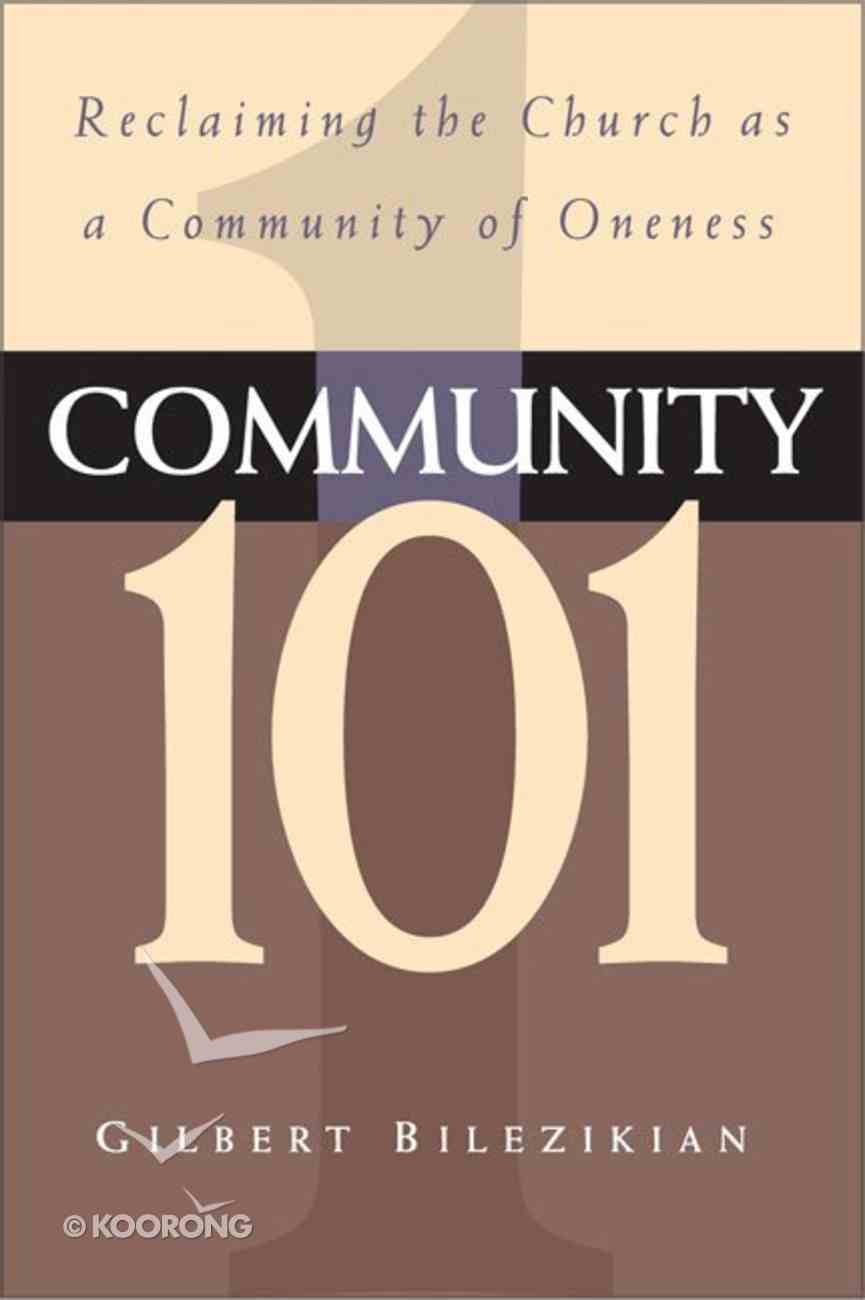 A carefully reasoned and passionately argued plea for the church to fulfil its essential nature and calling. 208 pages, from Zondervan.

A carefully reasoned and passionately argued plea for the church to fulfil its essential nature and calling. 208 pages, from Zondervan.

'Community 101' is a carefully reasoned and passionately argued plea for the church to fulfill its essential nature and calling.
-Publisher

Gilbert Bilezikian (ThD. Boston University) is a professor emeritus of Wheaton College, a charter member and elder of Willow Creek Community Church in South Barrington, Illinois, and the author of Community 101, The Liberated Gospel, Beyond Sex Roles: What the Bible Says about a Womans Place in Church and Family and Christianity 101. In French translation, Community 101 was awarded the Prix Littéraire Evangélique 2001, an award similar to an American Book of the Year award.

Preface According to the New Testament, the church of Jesus Christ is the support ('pillar') and the guardian ('bulwark') of God's truth (1 Tim. 3:15 rsv). Unfortunately, history shows that the church has often acted as the enemy and the betrayer of God's revealed truth. Christians would generally agree that the doctrine of salvation is of paramount importance in their belief system. Yet, as incredible as it may seem, the church lost track of this truth for about a millennium of its existence and replaced it with various theories of salvation by works that never worked. The simple teaching that salvation is a gift of God's grace to be appropriated by faith was finally rediscovered in the sixteenth century. With a mighty prophetic voice, the whole Bible registers God's opposition to injustice and unrighteousness. However, for the major part of its history, the church has identified itself with institutional evils such as slavery, segregation, racism, sexism, and apartheid, often by misusing texts from Scripture to justify such practices. The church's proven capacity to deviate from the teachings of the Bible is reason for consternation. It also calls for continual reformation. In our day, there is a clamor for the church to rediscover its identity as community. Many Christian leaders bemoan the fact that the church has lost its basic biblical definition as divinely designed community. Lay people and clergy alike express dissatisfaction with churches conducting their business as if it were a business. They compare the stilted and stultifying routines of their church life to the effervescent explosion of Holy Spirit-generated vitality that enabled the church of Pentecost to conquer the ancient world for Christ. They wonder with nostalgia where the power has gone. They realize that they have often become lost in a jungle-growth of unbiblical traditions that choke the life out of their churches and stifle their ministries. They yearn to rediscover the biblical tradition that preceded their various ecclesiastical traditions. They demand a radical return to the basics of biblical teachings about the church as community. Three sets of circumstances have converged into the writing of this book. First, its contents reflect biblical insights acquired during thirty years of theological teaching in institutions of higher learning. Second, they also contain the fruit of lessons learned from close personal involvement in the establishment and growth of Willow Creek Community Church and of its affiliated ministries. Finally, they summarize the substance of conferences on the church as community given in the course of a heavy schedule of speaking engagements over the last few years. This book is written partly in response to urgings that the material presented at such conferences be made available in print for the purpose of study and dissemination. Although this book constitutes a self-contained unit, a thorough study of this teaching on community could begin with my book Christianity 101 (Zondervan, 1993). In particular, chapter 7, on the doctrine of the church, can be used as a general introduction to the main themes on this topic. The study sequence would then call for reading the present work, Community 101, followed by Beyond Sex Roles (Baker, 1985), which deals more pointedly with community life in church and family from the perspective of the place of women in those societal contexts. Naturally, the Scriptures remain the supreme guide for a Christian definition of community. Therefore, each of the books mentioned above should be consulted with an open Bible close at hand. Two dear friends had a part in the making of this book. Kathleen Kegel performed the magic transmutation of a barely legible handwritten text into a high-tech, electronically deliverable, letter-perfect document. Mike Topel screened the manuscript with the same sagacity and unremitting rigor that he had plied into my previous book. I am indebted to a lecture of my former colleague, Dr. David Klopfenstein, for the diagram on page 181. A few years ago, a group of people advocating a view of women's roles in the church that I consider to be destructive to biblically defined community held a meeting in Chicago and were given air time on a national Christian radio network. During the show, the host phoned me and put me on the line to debate with them some of the issues now covered in this book. As the discussion progressed, it became evident that this group treated with derision the view of community I was defending. It was then that I resolved to put those ideas in writing in order to give them better expression. This book would not have been written without the incentive provided by that incident. Those people will easily recognize themselves and appreciate the significance of this acknowledgment of my indebtedness to their condescension. At several points in the body of this work, reference is made to the availability of materials on small groups, spiritual gifts, seeker evangelism, and conferences on community. A catalogue of such materials may be obtained at Willow Creek Resources/ Zondervan Direct Source, 5300 Patterson Ave. SE, Grand Rapids, MI 49530 (Telephone 1-800-876-7385). Gilbert Bilezikian