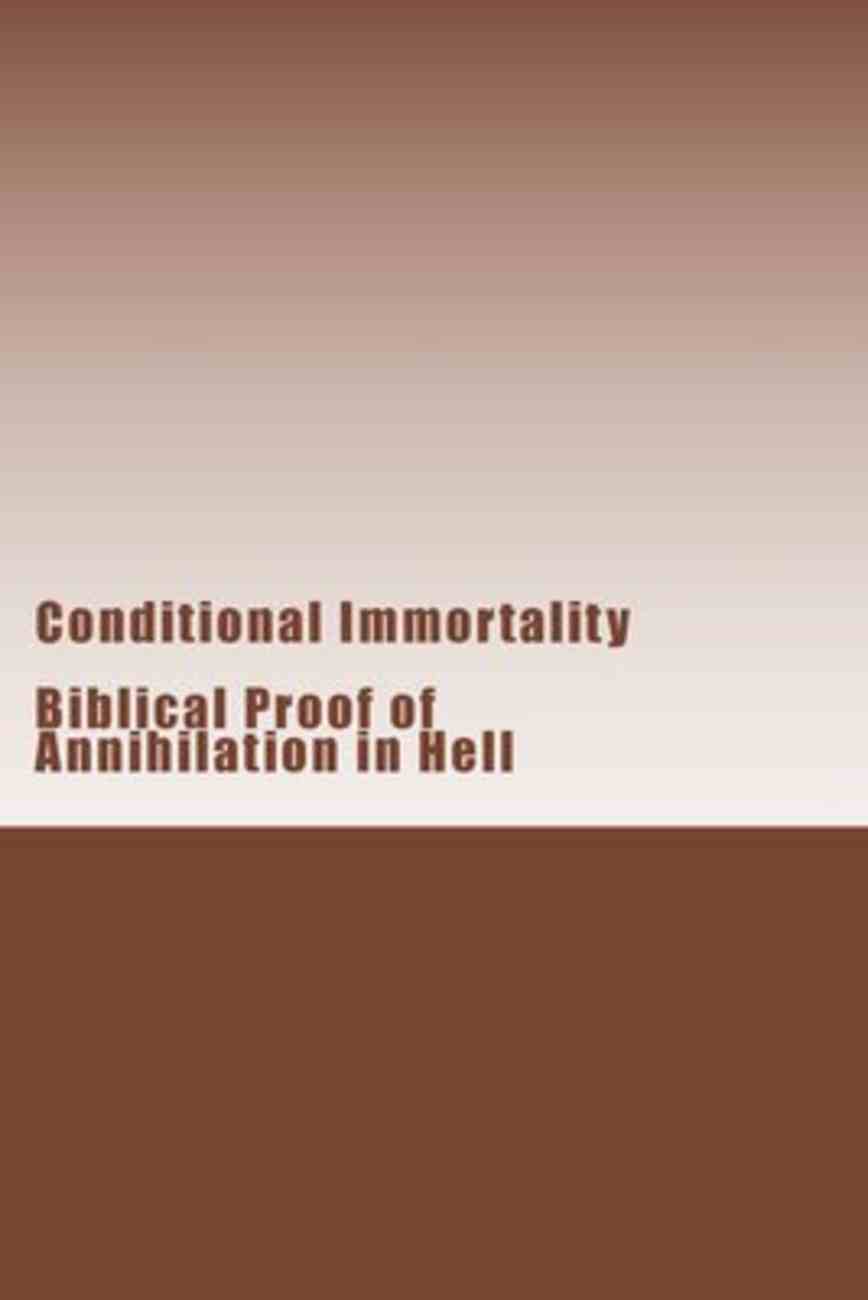 A growing number of well-known Christian leaders, such as Dr. David R. Reagan, John R. Stott, Greg Boyd, Roger Forster (co-founder of the March for Jesus events), Philip Hughes, Michael Green, Stephen Travis, and Clark Pinnock have declared support for part, or all, of the biblical doctrine of "conditional immortality." Even the British Bible translator, William Tyndale, also defended Conditional Immortality during his lifetime. Also, the very well respected scholar F.F. Bruce states, "Eternal conscious torment is incompatible with the revealed character of God" so he chose to write the forward to an excellent evangelical book on this topic called, "The Fire that Consumes" by Edward Fudge. While some call it annihilationism, simply stated, "Conditional Immortality" is the biblical belief that the "immortality" of the soul is not inherent (Greek philosophers thinking) but conditional (Biblical thinking) upon receiving the gift of everlasting life through faith in Jesus (Yeshua in Hebrew). It is part and parcel of the gospel. God alone has immortality -- anyone else becomes immortal only as a result of God's gracious gift (1 Timothy 6:16, Romans 2:7). For centuries, church theologians have wrongly assumed the Greek doctrine of the immortality of all souls. Therefore, it is no wonder that the message of immortality has been completely dropped from modern preaching. I ask you, when have you ever heard a message offering "immortality" as part of the gospel presentation? It is almost never done, because today most people falsely assume the soul is already immortal. Yet, immortality through Jesus (Yeshua) alone is what the Jewish Apostle Paul preached:* (He/Jesus), has destroyed death and has brought life and immortality to light through the gospel. (2 Timothy 1:9b-10)Paul clearly links immortality to the gospel. Paul did not believe the Greek philosophy of his day which taught the immortality of all souls. Before the Messiah, Jesus, came, no one had a chance at immortality because of sin. If they did, then Paul's statement would make no sense. Why would immortality come through the gospel if all had it from birth? The gospel would not have brought about immortality - since all had it. But immortality is uniquely and only with believers...Here is an actual comment (one of many) gotten after reading this scriptural argument:*Thank you so much for the wealth of solid biblical insight you have given.I grew up attending several different denominations of Christian churches, and I was taught the traditional view of hell. All the churches I have attended as an adult have taught the traditional view. I've always wondered why the word, "perish" didn't actually mean "perish" or "be destroyed". I was taught that it meant "be eternally tormented". I have always wondered why the Bible said eternal life was a gift if it was something we already were going to have no matter where we ended up. Now I know I was right to question these things. Paul never preached about eternal torment, only of the gift of eternal life one could receive by putting their faith in Jesus. How sad it is that so many people only hear of a God that will send them to hell where He will torment them eternally instead of the God who gives eternal life as a gift because of His great love. -- HeidiSo read this book to see how unbiblical the concept of the immortality of the unsaved soul is. Immortality is reserved only for those who put their faith in Jesus. All the rest are destroyed (not preserved) (see Matthew 10:28) after a period of time. They will suffer no more and no less than their sins deserve - then will be destroyed forever.God is just and Holy.... but not cruel
-Publisher

Reclaiming Our Forgotten Heritage: How Understanding the Jewish Roots of Christianity Can Transform Your Faith
Curt Landry
Paperback

Man and Woman: One in Christ
Phillip Payne
Paperback