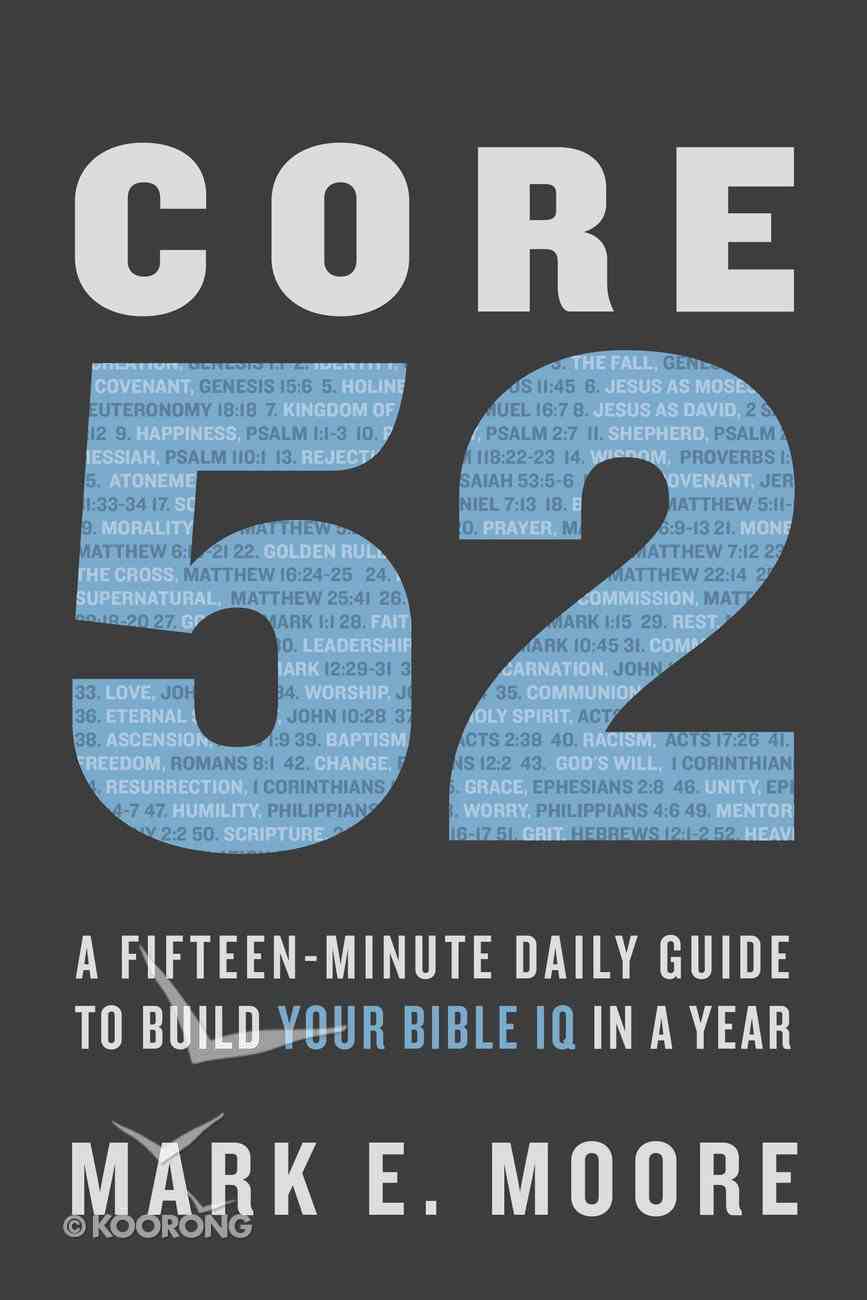 Core 52: A Fifteen-Minute Daily Guide to Build Your Bible Iq in a Year

:In just fifteen minutes a day, you can master the 52 most important verses in the Bible in a year. While there are lots of one-year Bible reading plans, few help you understand the words that you're reading. So...

25 available
Expected to ship on Monday from Australia.
Learn More
Free Shipping
for orders over $99.

One Minute With God: A Year-Long Daily Devotional
Dayspring
Hardback

Through the Year With John Stott: Daily Reflections From Genesis to Revelation
John Stott
Paperback

:In just fifteen minutes a day, you can master the 52 most important verses in the Bible in a year.

While there are lots of one-year Bible reading plans, few help you understand the words that you're reading. So what if we could introduce you to a Bible reading plan that would dramatically increase your mastery of the Bible in one year?

Mark Moore coaches you through 52 of the Bible's most important verses. These are the "core" of the Bible. Each verse clears the path to master and manage dozens of other verses that run along the same principle path. At the end of this journey, you will move from curiosity about the Bible to competence in the Bible.

Core 52 is the quickest way to understanding the whole of God's Word for your life.
-Publisher


Question: Why are we here?


We live in an immense universe on an extraordinary little blue ball. There&rsquo;s no question it&rsquo;s a masterpiece, and at its center is the human species. Yet each of us, treading across this sacred space, wonders why we&rsquo;re here. What&rsquo;s our part to play in this theater of life?


That all depends on the answer to the following three questions.

Who Created This World?


All artists leave fingerprints on their work. So knowing the creation gives a glimpse into the nature of the creator. The Bible teaches that God is actually three in one: Father, Son, and Spirit. Though the clearest glimpses of this &ldquo;Trinity&rdquo; are in the New Testament, all three peek from behind the curtain as early as Genesis 1:1&ndash;3.


God the Father is the architect. That&rsquo;s how the Bible begins: &ldquo;God created.&rdquo; Specifically, God created the elements out of nothing. This sounds simple, even obvious. Yet every other creation story from the ancient Near East assumes that what&rsquo;s eternal is physical matter, not God. The gods merely fashioned preexisting matter into the existing world, like children shaping Play-Doh.


The Bible, however, asserts that God alone is eternal. Hence, the universe is an extension of God, not vice versa. This Christian worldview stands in opposition to all worldviews that assert matter as eternal rather than God. This includes polytheism (multiple gods) and pantheism that sees god in inanimate objects such as wind, waves, or animals. The Christian worldview is also in opposition to Darwinian evolution that replaces the eternal God with eternal &ldquo;stuff.&rdquo;


The idea that God created the earth is a common core among the monotheistic religions: Judaism, Islam, and Christianity. However, there&rsquo;s a factor added by Christians that&rsquo;s absent from other religions: the Holy Spirit is the engineer. As we read in Genesis 1:2, &ldquo;The earth was without form and void, and darkness was over the face of the deep. And the Spirit of God was hovering over the face of the waters.&rdquo; This Hebrew word &ldquo;hovering&rdquo; expresses a vibration. The Spirit &ldquo;quaked&rdquo; to bring order out of chaos. It&rsquo;s not dissimilar to a frantic hostess thirty minutes prior to dinner guests arriving. The Spirit was intent on ordering the creation so it would be a life-giving garden.


The Hebrew word for &ldquo;breath&rdquo; is also translated &ldquo;spirit.&rdquo; For example, the breath of God animated Adam in Genesis 2:7. In Genesis 7:22, the word for &ldquo;breath&rdquo; is the very word translated &ldquo;spirit&rdquo;: &ldquo;Everything on the dry land in whose nostrils was the breath of life died.&rdquo;


This is also true of animals, according to Psalm 104:30: &ldquo;When you send forth your Spirit, they are created, and you renew the face of the ground.&rdquo; Every animal that has breath is sustained by the Spirit. The Spirit is the ongoing force of God that gives life, breath, and sustaining energy on earth. He&rsquo;s relentlessly, intimately, and perpetually involved in the very fabric of our earthly environment. God the Father created; God the Spirit creates.


There&rsquo;s a telltale sign when people ignore the Spirit in creation. Namely, the environment becomes a resource to be exploited rather than a gift to be nurtured. The elements become mute, no longer declaring the glory of God (Psalm 19:1&ndash;3). We miss God in the thunderstorm and wind, the bloom of a flower, and the majesty of the mountains. Our environmental insensitivities betray our ignorance of the Spirit&rsquo;s continued care for every element of our earth. Consequently, Christians restrict worship to a building on Sunday, rather than worshipping daily in the expanse of the universe, where broader culture has replaced the love of the Spirit with the law of the jungle.


We need to acknowledge the Spirit in creation.


God the Father is the architect. God the Spirit is the engineer. Jesus is the builder. He did the heavy lifting during creation. This is seen in Genesis 1:3: &ldquo;God said, &lsquo;Let there be light,&rsquo; and there was light.&rdquo; If we lay that alongside John 1:1&ndash;3, we see the mechanics of creation: &ldquo;In the beginning was the Word, and the Word was with God, and the Word was God. He was in the beginning with God. All things were made through him, and without him was not any thing made that was made.&rdquo; This Word, as we learn in verse 14, is none other than Jesus. Even before he came to earth in human form, he was fully God, the embodiment, as it were, of God&rsquo;s spoken word. When God gave the command, Jesus&mdash;the Word&mdash;turned the command into creation.


The apostle Paul confirmed this:


What happens when we ignore the role of Jesus in creation? Typically, salvation becomes a future spiritual state in heaven rather than an actual earthly reality. We do, of course, have a future in heaven. Nonetheless, Jesus the creator is equally interested in your eternal life here and now.


So there you have it: the Trinity embedded in the first three verses of Genesis. God is the architect, the Spirit is the engineer, and Jesus is the builder. All three are unique and essential to creation. If any of these are ignored, we&rsquo;ll misunderstand not only the nature of creation but also our own nature and the dignified role God intends for us.

Why Did God Create This World?


Some suggest that God created because he was lonely. That&rsquo;s impossible to prove and pretty hard to swallow. God had angels in abundance who could communicate, perform, and do who knows how many other things to entertain, serve, and otherwise delight God. Furthermore, God had himself. God is a community&mdash;Father, Son, and Spirit. They love, communicate with, and enjoy one another. There&rsquo;s nothing lacking in God&rsquo;s own person that required him to create someone to keep him company.


So why did God create?


We need look no further than Psalm 102:18 for an answer: &ldquo;Let this be recorded for a generation to come, so that a people yet to be created may praise the Lord.&rdquo; Every generation that God created&mdash;from our primal parents in Eden to our own unborn children&mdash;has a singular divine purpose: to bring God glory. This shouldn&rsquo;t come as a shock. The fingerprints of God in our own souls will drive us in the same direction. Why do we dress fashionably? To look good. Why do we decorate our homes? To impress company. Why do we present a gourmet meal with such panache? To please others and receive praise. Isn&rsquo;t it our internal impulse to create for others&rsquo; pleasure and for our own praise? God creates with the same impulse. We&rsquo;re here for the express purpose of bringing God glory.


When we look at our own genetic complexity, we&rsquo;re awestruck. The fingerprints of an infant, the structure of our eyes, the electrical synapses of the brain&mdash;our bodies are works of art. From Olympic spectacles to ballet, from the NBA to National Geographic, we&rsquo;re stunned by God&rsquo;s handiwork.


David expressed it well: &ldquo;You formed my inward parts; you knitted me together in my mother&rsquo;s womb&rdquo; (Psalm 139:13). Without speaking a word, even inanimate objects like mountains and rivers and stars and rainbows acclaim their Creator (89:12; 148:3&ndash;10). Creation itself is primary proof of God&rsquo;s existence (Romans 1:20, 25). By seeing his fingerprints in the world, we&rsquo;re drawn to his self-portrait in the Bible.


Here&rsquo;s where it gets most majestic. We were made to manage the creation of God. &ldquo;We are God&rsquo;s handiwork, created in Christ Jesus to do good works, which God prepared in advance for us to do&rdquo; (Ephesians 2:10, niv). We continue God&rsquo;s act of creation. What makes this more amazing&mdash;and what raises the stakes&mdash;is that God is personally and perpetually involved in creating and recreating this masterpiece of a world with the help of humans. God created the heavens and the earth&mdash;he leaves it up to us to make of it a world even more wonderful.

How Did God Restore Creation?


This world is a wreck. It all went south in Genesis 3, when Eve was seduced by the serpent. That moment of indiscretion released a cascade of consequences. None of this took God by surprise. But it did take his breath away. He was distraught over the condition of the creation he so cherished.


This flows into the story of the Flood (Genesis 6&ndash;8), when God hit &ldquo;reset&rdquo; on the world. God knew this wasn&rsquo;t a permanent fix. As the first couple fell in the garden, so Noah&rsquo;s family failed after the Flood. So, too, Abraham&rsquo;s nation rebelled. But the plan of God all along was to bring a fallen creation back. Notice he began with a couple, then a family, then a nation. And today his mercy extends to all the earth&mdash;every tongue, tribe, and nation. The recovery of Eden is the story of the Bible.


The finale, of course, is the story of Jesus. By his blood, Jesus would recreate the human spirit by renewing us through his own Spirit. &ldquo;If anyone is in Christ, he is a new creation. The old has passed away; behold, the new has come&rdquo; (2 Corinthians 5:17). We&rsquo;re recreated for good works in Christ (Ephesians 2:10). It&rsquo;s not a quick fix nor an easy solution.


This restoration is not merely for humans but for all creation. Paul expressed it like this:


The creation waits with eager longing for the revealing of the sons of God.&hellip; For we know that the whole creation has been groaning together in the pains of childbirth until now. (Romans 8:19, 22)


&#127; Day 5: Identify one small thing you could do today to help restore Eden where you live.


Bonus Read: Guillermo Gonzalez and Jay W. Richards, The Privileged Planet: How Our Place in the Cosmos Is Designed for Discovery.