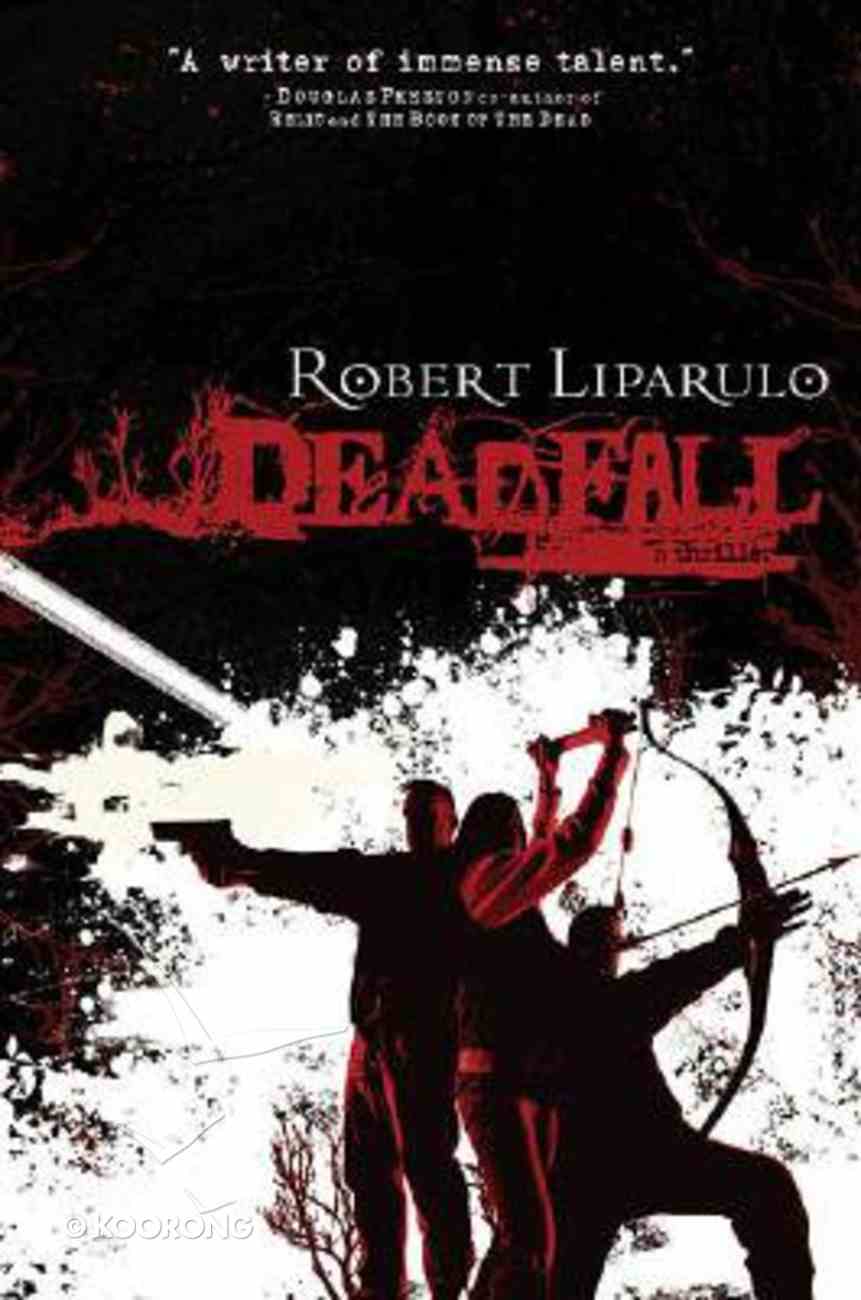 Deep in the isolated Northwest Territories, four friends are on the trip of a lifetime. Dropped by helicopter into the remote Canadian wilderness, Hutch, Terry, Phil, and David are looking to escape the events of a tumultuous year--a bitter divorce,...

Deep in the isolated Northwest Territories, four friends are on the trip of a lifetime. Dropped by helicopter into the remote Canadian wilderness, Hutch, Terry, Phil, and David are looking to escape the events of a tumultuous year--a bitter divorce, bankruptcy, depression, and job loss--for two weeks of hunting, fishing, and camping. ^Armed only with a bow and arrow and the basics for survival, they've chosen a place far from civilization, a retreat from their turbulent lives. But they quickly discover that another group has targeted the remote region and the secluded hamlet of Fiddler Falls for a more menacing purpose: to field-test the ultimate weapon. ^With more than a week before the helicopter rendezvous and no satellite phone, they must risk everything to help the townspeople who are being held hostage and terrorized. ^An intense novel of character forged in the midst of struggle, survival, and sacrifice, Deadfall is highly-acclaimed author Robert Liparulo's latest rivetin
-Publisher

Robert Liparulo's debut novel, Comes a Horseman, is being made into a major motion picture by producer Mace Neufeld and his short story ?Kill Zone? is included in the anthology Thriller, edited by James Patterson. Robert lives in Colorado with his wife, Jodi, and their four children.

Chapter One
Fiddler Falls, Saskatchewan, Canada
On the north shore of the Fond du Lac River, thirty miles from
the Northwest Territories
Population: 242


The people trying to kill Roland Emery quickly closed the distance behind him.


"Back off!" Roland yelled at his rearview mirror, where the big front grille of their truck loomed.


This rutted half-road was as familiar to him as the ever-increasing contours of his face. He knew every bump, every bend, every place where the trees stepped in closer to slash at your paint or, if you really were not paying attention, kick a dent in a side panel or door. Still, the newcomers stayed on him, falling back on the turns, then roaring forward when only rough terrain stood between them. Their truck was one of those big fancy jobs, those pseudo-military monsters that ate ruts and boulders like granola.


A jolting bump gave him a glimpse of his own face in the mirror: red-rimmed eyes, bulging in fear. One of his shaking hands came off the wheel, fluttered to his face, and wiped at the oily sweat on his brow.


What do they want? he thought. No, no, no . . . That wasn't the question. The question was why? Why did they want to kill him?


Steering around each tight curve, he tried to get hold of his frenzied mind. What appeared to him, calming him, was his wife's face. Lizzie. What would happen to her if he died? Fine lady, tough as the wolverines they trapped together; but she always said what kept her going through the cold mornings checking traps and the long days guiding hunters into the hills was knowing Roland would be there at night to stoke the fire and fix a cup of Nahapi "sit down" tea just the way she liked it.


He pushed his lips together and cranked the wheel, taking the car down through a shallow stream and out the other side. He felt his panic pulling at him, trying to make him do something stupid. He squinted and forced Lizzie to fill that place in his mind instead of the terror.


He wished they had put some money aside so the old gal wouldn't have to work so hard by herself if these guys after him got their way. Thank heaven she wasn't with him now.


Oh yes, at least there was that.


She'd risen with him at five, as usual, but moving a little more slowly, with a little less spunk.


But he knew her. "Just a little tired" for Lizzie was "I'd better go see the doc" for most people. So he had insisted on checking the traps alone.


Which is what he had been doing when the big truck appeared, as bright yellow as a birthday balloon. He soon realized that the color had nothing to do with the owner's fun-loving disposition. Rather, it was ironic or sarcastic or one of those words that meant "you can't judge a fellow by the color of his car."


Roland had been coming back from checking yet another empty trap when he'd spotted the truck. He'd left his old Subaru right on the rutted trail since travelers in these hilly woods were nearly unheard of this time of year. The big yellow truck had been farther up, as though returning from camping. But he had seen it parked in front of Ben Mear's B&B on his way out of town. Fiddler Falls was too small for visi­tors to go unnoticed, let alone a group with a fancy machine like that.


Sure enough, he'd seen where the vehicle's wheels had pushed down the grass and some saplings on its way around the Subaru. The driver must have realized there was nothing to see but more trees along that route and turned around. He had stopped fifty yards away, as though waiting for Roland.


A man and a girl had appeared to be standing in the bed of the truck, but straps crossed over their shoulders and chests, so they must have been sitting in chairs. The chairs positioned them high enough to see over the cab's roof. And that was just weird.


He had waved, but the strangers had not waved back. Instead, the man seated in the bed had pointed at a tree between them.


The tree had exploded.


There had been the sound of thunder, a blinding flash, a wave of hot air, and the tree had disappeared. It hadn't been blown out of the ground or knocked off its trunk. It hadn't fallen into the woods or across the path. It had just . . . disintegrated. Needles and splinters and dirt had shot straight up, then rained down. The branches closest to the destroyed tree had ignited, burning like a thousand tiny torches.


Roland had fallen back into the brush, then staggered to his feet. The man's finger had swung slowly toward Roland. Roland had run around the car, hopped in, and reversed off the trail. He had turned the Subie toward town and punched the accelerator. The station wagon had coughed and sputtered, and he'd slapped his palm against the steering wheel and cursed himself for not giving it the tune-up it had wheezed for since summer.


Now it was moving pretty good, bouncing over rocks and ruts, but it was no match for the newer, bigger truck on its tail. Every now and again he'd catch a glimpse of the two heads bobbing furiously over the cab's roof. They would duck under branches hanging over the trail, and Roland thought the trees must have batted them a few good times. Still, they appeared to be laughing. When he squinted for a better look, he almost went off the road.


Finally he came out of the heavy woods and onto the dirt road that became Shatu' T'ine Way a quarter mile up: town, people, Constable Fuller. No way his pursuers would follow him there, not into the heart of Fiddler Falls. Small as it may be, witnesses were witnesses.


Weaving from side to side, too many thoughts crowding his driving etiquette, he saw the truck plow out of the trees and grow larger in the mirror.


He flew past the B&B, where he'd seen the truck earlier. App­roa­ch­ing the town's main street, he braked. The car's rear tires tried to slide out from under him. He gave it more gas, bumping up onto Provincial Street's blacktop. The avenue was barren. Most of the town was only now waking up. The autumn sun was still burning off the gray haze of morning twilight.


"Be there, be there," he said, speeding past the community center on his left.


His pursuers swung into view behind him. As he crossed Fife Street, he swerved to the left curb. The RCMP substation was dark. The Closed sign Tom used to inform folks he was out and about leaned against the big front window. Tom made it a point to tell everyone that he, as constable, never really closed; they simply needed to find him somewhere else.


He saw Old Man Nelson sweep a plume of dust out of the general store's front door across the street. He cranked the wheel and shot to the opposite curb, but the old man had stepped back inside.


Roland grabbed for the door handle, flicking his eyes to the mirror as he did.


The truck had stopped at the intersection.


The man in the cab was pointing at him.


Everything happened at once, but for Roland, it seemed to take a lifetime. Metal ripped and tore. Glass shattered. Roland burst into flames. It wasn't that part of him caught fire and quickly spread. No, he was instantly engulfed. His arm spasmed. His fingers caught on the handle, and the door opened. He rolled out and stood, thinking what he needed to do . . . thinking . . .


His hair singed away, his flesh blistered, his blood boiled.


He was blinded by agonizing pain . . . then by the physical destruction of his eyes. He stumbled, may have fallen; he did not know. Every nerve--head to toe, skin to marrow--cried out for relief.


A thought, an image occurred to him. He was frying. He tried to scream.