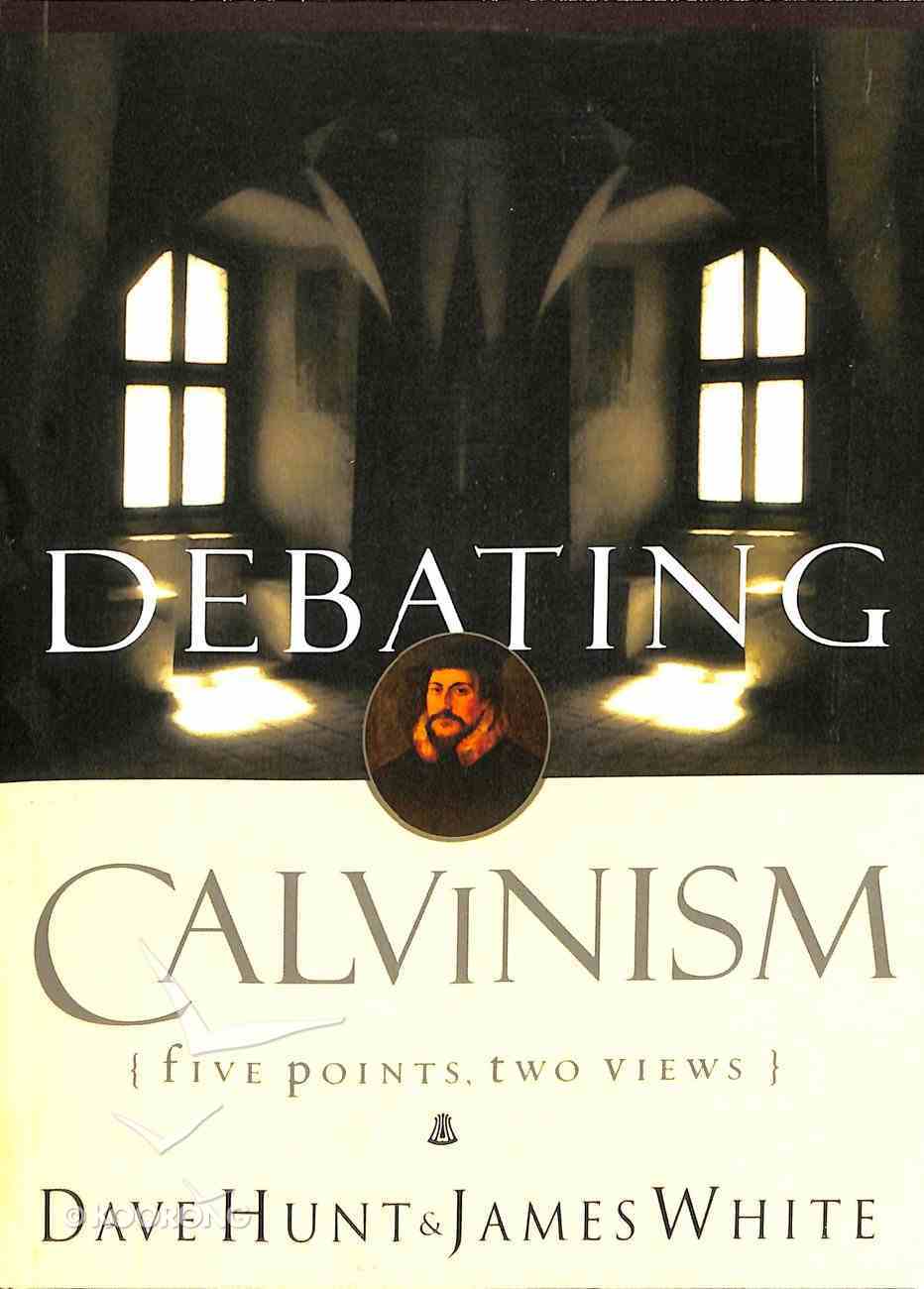 A centuries-old belief system is put to the test as two prominent authors examine and debate the subject of Calvinism from opposing viewpoints. James White, author of THE POTTER'S FREEDOM, takes the Calvinist position. Dave Hunt, author of WHAT LOVE...

3 available
Expected to ship within 4 hours from Australia.
Learn More
Free Shipping
for orders over $99.

Grieving: Your Path Back to Peace
James R White
Paperback

A centuries-old belief system is put to the test as two prominent authors examine and debate the subject of Calvinism from opposing viewpoints. James White, author of THE POTTER'S FREEDOM, takes the Calvinist position. Dave Hunt, author of WHAT LOVE IS THIS (now out of print), opposes him. The exchange is lively and at times intense as these two articulate men wrestle over what the Scriptures tell us about God's sovereignty and man's free will. This thought-provoking, challenging book provides potent responses to the most frequently asked questions about Calvinism.
- Publisher.

A centuries-old belief system is put to the test as two prominent authors examine and debate the subject of Calvinism from opposing viewpoints. James White, author of The Potter's Freedom, takes the Calvinist position. Dave Hunt, author of What Love Is This, opposes him. The exchange is lively and at times intense as these two articulate men wrestle over what the Scriptures tell us about God's sovereignty and man's free will. This thought-provoking, challenging book provides potent responses to the most frequently asked questions about Calvinism.

Is God free to love anyone He wants?
Do you have any choice in your own salvation?

It’s time to find out.

Calvinism has been a topic of intense discussion for centuries. In this lively debate, two passionate thinkers take opposing sides, providing valuable responses to the most frequently asked questions about Calvinism. Only you can decide where you stand on questions that determine how you think about your salvation.

The subject of Calvinism has been hotly debated for many years, and now two prominent authors and researchers will debate this controversial topic in a book debate. This project came about when Mr. Hunt wrote What Love is This- Calvinism’s Misrepresentation of God. Mr. Hunt was challenged by many on the Calvinist bench and he eventually agreed to do a debate in a book format. The books purpose is to get you to think and come to your own conclusions.
-Publisher

Dave Hunt is a best-selling author, esteemed researcher, lecturer, and scholar. Nearly 4 million copies of his books have been sold, and translated into more than 40 languages.Mr. Hunt's highly energetic and intelligent dialogue has caused him to be one of the most sought-after radio and television talk show guest, as well as the keynote speaker at conferences worldwide

James R. White is the author of several acclaimed books, including The King James Only Controversy, The God Who Justifies, Scripture Alone:Exploring the Bible's Accuracy, Authority and Authenticity; Same Sex Controversy:Defending and Clarifying the Bible's Message About Homosexuality and The Forgotten Trinity. He is an elder of the Phoenix Reformed Baptist Church, director of Alpha and Omega Ministriesa Christian apologetics organization, an adjunct professor with Golden Gate Baptist Theological Seminary, and a professor of apologetics with Columbia Evangelical Seminary. He and his family live in Phoenix.

What did you do to be saved? What has God done? Christians from every age of history have taken aim at answering these questions from the Scriptures. And some of these voices have rung out louder than others: Augustine, Pelagius, Arminius, Calvin, Erasmus, Luther, Whitefield, Wesley. We&rsquo;ve heard their names, but have we listened to their words? Have we measured their arguments by the God-breathed words of the Bible?

Reader, you will find in our debate that the issues surrounding the vital teachings of the Bible concerning our own salvation&mdash;what theologians call the doctrines of soteriology&mdash;are still very dear to Christians of today. The passion of our debaters is undeniable. Their positions are entrenched and heavily fortified. Indeed, we might easily have had their names conjoined on the cover with versus rather than the tamer and.

The issue at hand is &ldquo;Calvinism&rdquo; insomuch as that system is codified in five main points: total depravity, unconditional election, limited atonement, irresistible grace, and perseverance of the saints. And yet surely both James White and Dave Hunt would readily admit that the issue runs deeper than these five points, to a way of thinking about God and how He works the impossible wonders of grace.

The format of this debate is largely standard, though most debates are done in live, public forums. Each author contributes seven chapters offered to substantiate his opening position statement. Following each chapter, a response, defense, and final remarks are given in turn. The constraints here are quantities of words, not minutes. As a reader, consider yourself at an advantage to glean and consider and reconsider the arguments at your leisure. Why can&rsquo;t he get it? you may find yourself asking. Or perhaps, How could I have missed that all along?

Our hope is that of Spurgeon, that publishing such a forum might &ldquo;thrust forward before the minds of Christians, precious truths, which but for it, might have been kept in the shade.&rdquo;1

In the late summer of 2000, I interviewed Dave Hunt on KPXQ radio in Phoenix. Mr. Hunt had just published an article in the Berean Call attacking the Reformed position. The article misquoted Matthew 23:37 and presented the &ldquo;standard&rdquo; objections to Calvinism, objections based primarily upon evangelical/Arminian traditions and common misconceptions concerning the actual beliefs of Calvinists. I had written a full-length response to Norman Geisler on the same topic in The Potter&rsquo;s Freedom, but Dr. Geisler had declined every opportunity for dialogue, especially public dialogue and debate. I knew Dave Hunt would not decline such an invitation.

White: One of the key issues that came out there&hellip;this is one of the main reasons I contacted you, one of the main reasons I wrote you the letter&hellip;is the issue of monergism versus synergism; that is, the idea that there is one force that brings about salvation, over against a synergistic&#160;viewpoint that views it as a cooperation, a cooperative effort between two forces, man and God. And the reason I brought that up&hellip;is that Mr. Sungenis, in representing the Roman Catholic perspective, very strongly attacked the Reformed emphasis upon the sovereignty of the grace of God.&hellip; In light of your article, and the fact that&hellip;you reject the concept of irresistible grace&hellip;you and I are responding to one of the key issues of the Reformation in a different way. In essence, my first question to you would be: Do you feel that the Reformers Martin Luther and John Calvin were in error in emphasizing the deadness of man in sin and the absolute necessity&mdash;not just necessity, but sufficiency&mdash;of the grace of God to bring a person to salvation?

Hunt: Well, first of all, James, I&rsquo;m very ignorant of the Reformers. I have not had time to read them. There are truckloads, I guess, of their writings. I like to just kinda&rsquo; pretend that we&rsquo;re back there in the days of the apostles before all of these things were written. And I like to go to the Bible. So whether the Reformers said this or that, I don&rsquo;t know.1


Mr. Hunt went on to say that we should go to the Bible, and I surely agreed with that. But I was surprised that he was unaware of the issue Luther had described as the very hinge upon which the entire Reformation turned; namely, the freedom of God and the sufficiency of the grace of God in salvation. This was even more surprising due to the fact that Mr. Hunt&rsquo;s attacks upon the Reformed faith parallel those of Roman Catholics. When it comes to the issues of the freedom of God, the efficacy of grace, and the will of man, Mr. Hunt&rsquo;s evangelical tradition stands side by side with Rome in denying the heart of the Reformation.

It was most surprising, then, to hear only a few months later that Mr. Hunt was writing a book about this very subject, especially in light of his own confession of ignorance of the topic. I informed him that, in light of the errors of understanding he had enunciated during the radio program, I felt it was out of line for him to be publishing on the topic.

The publication of What Love Is This? prompted me to write an open letter, which was posted on our website and very quickly distributed to a very wide audience.2 The book was disappointing on every level. The tenor was harsh. The attacks upon historic figures were unfair and unkind, revealing a bias that no honest historian should abide. The misuse of sources was rampant and included numerous errors in understanding even of my own work, which played a prominent role in Mr. Hunt&rsquo;s broadside at &ldquo;Calvinism.&rdquo; The same misconceptions spoken in self-professed ignorance in August of 2000 were now being promoted under the banner of research and argumentation in print. But most importantly, I noted the continued enshrinement of tradition over sound exegesis of the Scriptures.

Some may question the wisdom of engaging in a point-counterpoint debate with Mr. Hunt on this topic. Allow me to say that I do so first and foremost out of love for God&rsquo;s truth and God&rsquo;s people. As an elder in a Reformed Baptist Church,3 I believe it is my duty to &ldquo;refute those who contradict&rdquo; (Titus 1:9) and give an answer for my faith. As an apologist, I must be consistent in my stance as well. If I point to Rome&rsquo;s teaching that the grace of God is necessary but not sufficient to save, and identify this as a gross error that denies God His true glory in salvation, must I not likewise point out this error when it is propounded under the name of evangelicalism? How can I consistently call Rome to the final authority of Scripture and insist that it test its traditions by God&rsquo;s Word when evangelicals go about blind to their own&#160;traditions, refusing to test them by Scripture, in essence abandoning sola scriptura? It would surely be more popular to refrain from pointing out these errors, but for the one who seeks God&rsquo;s approval there is no other choice.

Dave Hunt does not understand the Reformed faith, and his book is filled with numerous straw-men caricatures that have nothing to do with the reality of it. It is not as if Mr. Hunt had not been warned that he was going to put in print many errors that would be quickly documented and refuted. I, along with others, can prove that we gave him that brotherly warning. But he has refused to take heed, so now the issue is the impact of the publication and dissemination of error on the wider audience of the church.