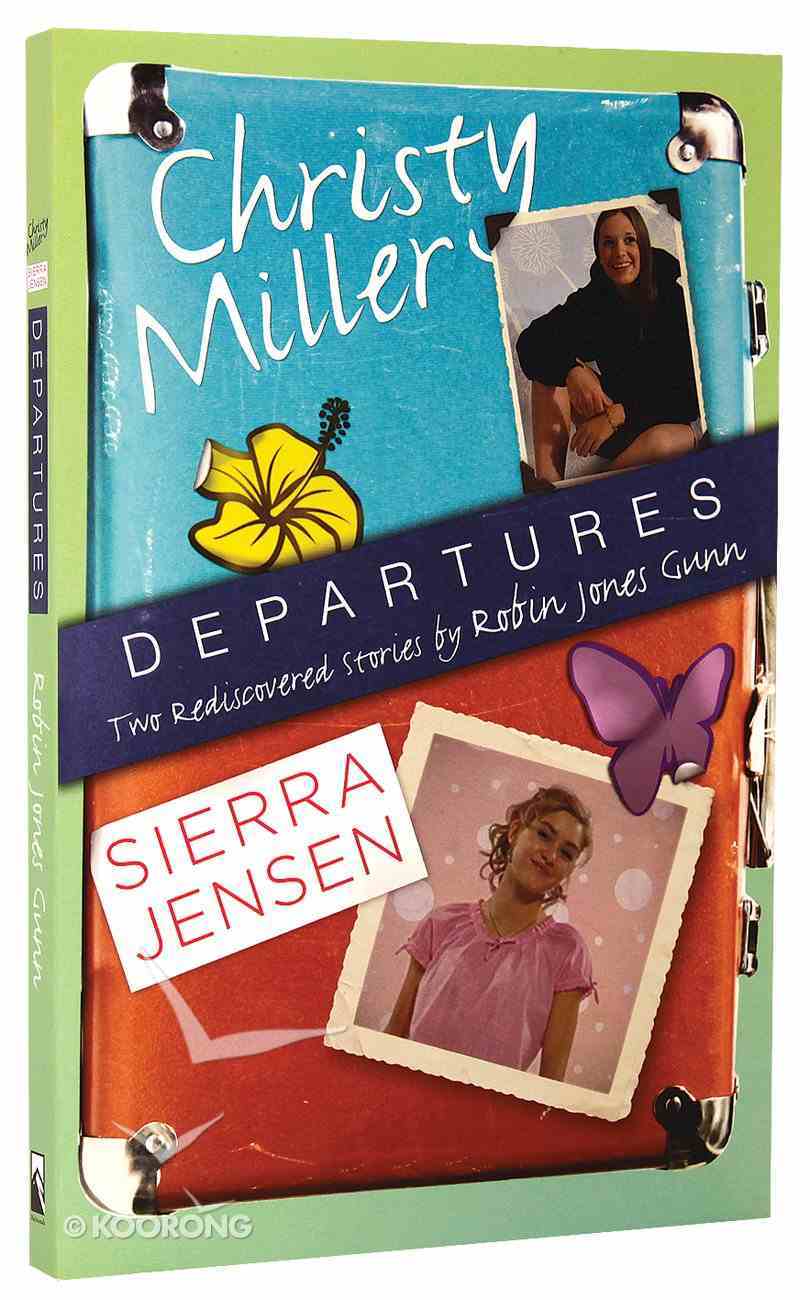 Christy Miller and Sierra Jensen cross paths on their way to summer vacations that reveal what a gift it is to have a true Forever Friend.^^Now Boarding at Gate 10 ^After her high school graduation, still aching from Todd's...

Christy Miller and Sierra Jensen cross paths on their way to summer vacations that reveal what a gift it is to have a true Forever Friend.^^Now Boarding at Gate 10^After her high school graduation, still aching from Todd's departure, Christy joins her family on a trip to Wisconsin to visit relatives. While there, she reunites with Matthew, an old friend from junior high. When Matthew starts to show a romantic interest in Christy, she realizes this summer vacation could change everything she thought her future would be.^ ^In the Event of a Water Landing^Fifteen-year-old Sierra Jensen can't wait to spend her summer vacation with her friend Jana at a pristine lake in Montana. But when they arrive, it becomes clear that Jana's only interest is acquiring a boyfriend. Sierra just wants to hang out with the guys as friends, but Jana turns every encounter into a possible romantic relationship. As their friendship begins to suffer, Sierra wonders if it's possible to find a Forever Friend who will listen to you, laugh with you, and keep your confidences.

As beads of perspiration dripped down her back, Christy Miller lifted her long, nutmeg brown hair to try to get some air on her neck. She didn’t know why her parents had dashed so quickly off the plane when it landed at the Minneapolis–St. Paul International Airport. They had more than an hour before their connecting flight left for Madison, Wisconsin.

“Would it be okay if I went to the snack bar for something to drink?” Christy asked her dad.

“Sure,” Dad said, reaching into his pocket for some money. “Buy something for your mother and me—and take your brother with you.”

Christy tried to hide her lack of enthusiasm over thirteen-year-old David’s tagging along. This was the first vacation her family had taken in a long time, and she didn’t want to be the one to start an argument.

“Can we play one of those video games?” David asked, pushing up his glasses. He was big for his age, just as Christy had been, and he resembled their red-haired father more every day.

“No. We’re only getting something to drink.” Christy led her brother through a maze of small round tables. The two of them were almost to the counter when David tripped over a girl’s foot that was sticking out from under a table. She was wearing large clunky boots and had her dark hair up in a clip. David stumbled and bumped into her chair, causing the girl’s backpack, which had been slung over the chair’s back, to fall to the floor.

“Sorry,” Christy said, apologizing for her brother and urging him to move on quickly.

The girl and her friend, who was sitting next to her, were probably a year or two younger than Christy was, yet they appeared to be traveling by themselves. At that moment Christy wished she were traveling with her best friend, Katie. A summer adventure would be so much more fun with a friend than with her family.

When Christy had graduated from high school two weeks ago, several classmates went on senior trips to exotic locations like Mexico and Hawaii. This was Christy’s exotic trip—a family weekend in Brightwater, Wisconsin, population 832.

Two days ago Katie had told Christy, “You shouldn’t complain. At least you’re going somewhere—unlike some people we know.” Katie then had flopped onto her bed and let out a sigh. “If you come home on Monday and find me here, in this same position, call the Guinness Book of World Records.”

Even though Christy knew better, she asked why.

“Because I will be the first person in history who will have died from boredom.”

Christy had argued that her grandparents’ fiftieth wedding anniversary in Brightwater, the town Christy had grown up in, would be twice as boring, but Katie didn’t buy it. She reminded Christy that more than once mystery, romance, and adventure had found her when she had least expected it.

Then Katie had lifted her head and added, “And don’t forget. You happen to be very available at the moment.”

Yes, Christy thought while handing David his drink, this would have been a much more exciting trip with Katie along. Christy directed her brother to a nearby exit she had spotted where he would have less human traffic to navigate through. With each of them holding two full drinks, Christy knew the chances of disaster with David were pretty high.

They had just made it through the café when Christy caught sight of a flash of sandy blond hair that looked so familiar. She held her breath and watched a guy enter the bookshop next to the café.

“David,” Christy said, “stay right beside me. I want to check on something in that bookstore.”

“That’s not fair. You wouldn’t let me play video games.”

Christy’s heart pounded wildly as she caught another glimpse of the broad shoulders and a tan neck. He wore a white T-shirt with a familiar surfing logo on the back.

“Where are we going?”

Christy couldn’t answer her brother. She was too absorbed in not screaming out “Todd!” at the top of her voice and running to the guy who was now standing with his back to her, looking at a magazine.

With cautious steps and protecting the drinks she held, Christy
blinked away sudden tears from her blue-green eyes. She now stood
only a few feet from the person who had held a special place in her
heart. Only two months ago, as they watched the sunset at the beach,
Christy had said good-bye to Todd. She never dreamed she would be
saying hello to him so soon.

“Hello,” she said aloud before she had a chance to think of a better greeting.

When he didn’t turn around, she stepped closer, her heart pounding loudly in her ears, and said, “Hi.”

“Christy?” David said. “What are you doing? Who are you talking to?”

The guy turned to face both of them, and Christy nearly dropped her drinks. This guy, who stood only inches from her, was definitely not Todd Spencer. He was good-looking, but he wasn’t Todd.

“What were you doing?” David asked, following her fast stride out of the bookstore. “Who did you think that was?”

Christy ignored David, trying to calm her emotions. How could she have made such a fool of herself?

“Did you think he was someone you knew?” David asked, trotting to keep up with Christy.

“Yes,” she answered. “From the back, he kind of looked like Todd.”

“Todd?! He didn’t look like Todd at all. You should have asked me before you went up to him. I could have told you it wasn’t Todd.”

Christy was about to turn and tell David to just drop the whole thing, when a voice over the loudspeaker announced, “Flight 73 to Madison, Wisconsin, is now boarding at gate 10.”

“Come on, David, that’s us.” Christy strode through the terminal, leading the way to gate 10. When they entered the waiting area, their parents were anxiously looking for them.

“Where have you been?” Mom asked, taking her drink from Christy.

“Christy thought she saw Todd,” David announced for the whole world to hear. “She followed this guy into a bookstore and started to talk to him.”

Christy grabbed her backpack and started for the line of passengers boarding the plane. Mom stopped her. “We have to wait. They’re only boarding rows 15 and higher. We’re row 14.”

David tugged on the strap of Christy’s backpack and said, “Hey, look! There he is.”

The guy from the bookstore had entered their waiting area and stood in line to board the same plane. Christy tucked her chin and turned her head so he wouldn’t see her.

“He doesn’t look at all like Todd, does he?” David said.

Christy slowly followed as her family stood in line. The guy was only two people ahead of her mom.

“He’s looking at you,” David announced, punching Christy in the side.

“David,” Christy threatened through clenched teeth. “Don’t you dare say another word. I mean it!”

David pretended to lock his lips with an invisible key. He stood with his shoulders back, playing the role of the model child. Christy moved along behind him with her head down, avoiding eye contact with any of the passengers, especially the tall blond surfer who was definitely boarding the same plane.