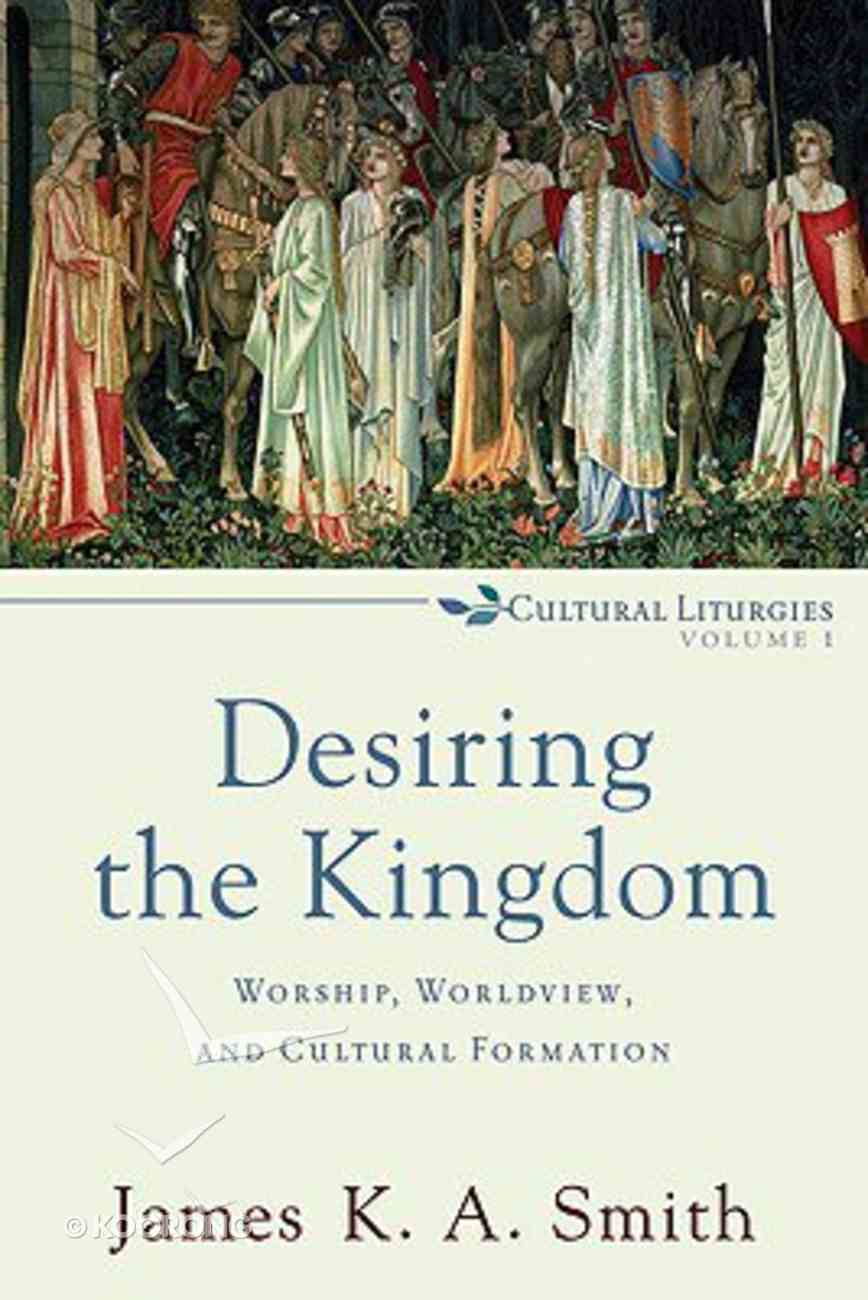 Philosopher James K. A. Smith reshapes the very project of Christian education in Desiring the Kingdom . This text is the first of three volumes that will ultimately provide a comprehensive theology of culture. The entire set will address crucial...

Philosopher James K. A. Smith reshapes the very project of Christian education in Desiring the Kingdom. This text is the first of three volumes that will ultimately provide a comprehensive theology of culture. The entire set will address crucial concerns in ontology, anthropology, epistemology, and political philosophy.
Desiring the Kingdom focuses education around the themes of liturgy, formation, and desire. The author contends - as did Augustine - that human beings are "desiring agents"; in other words, we are what we love. Postmodern culture, far from being "secular," is saturated with liturgy, but in places such as malls, stadiums, and universities. While these structures influence us, they do not point us to the best of ends. Smith aims to move beyond a focus on "worldview" to see Christian education as a counter-formation to these secular liturgies.


His ultimate purpose is to re-vision Christian education as a formative process that redirects our desire toward God's kingdom and its vision of flourishing. In the same way, Smith re-visions Christian worship as a pedagogical practice that trains our love.


Desiring the Kingdom will reach a wide audience; professors and students in courses on theology, culture, philosophy, and worldview will welcome this contribution. Pastors, ministers, worship leaders, and other church leaders will appreciate this book as well.
-Publisher.


Malls, stadiums, and universities are actually liturgical structures that influence and shape our thoughts and affections. Humans--as Augustine noted--are "desiring agents," full of longings and passions; in brief, we are what we love. James K. A. Smith focuses on the themes of liturgy and desire in Desiring the Kingdom, the first book in what will be a three-volume set on the theology of culture. He redirects our yearnings to focus on the greatest good: God. Ultimately, Smith seeks to re-vision education through the process and practice of worship. Students of philosophy, theology, worldview, and culture will welcome Desiring the Kingdom, as will those involved in ministry and other interested readers.
-Publisher

A Philosophical Theology of CulturePhilosopher James K. A. Smith reshapes the very project of Christian education in Desiring the Kingdom. The first of three volumes that will ultimately provide a comprehensive theology of culture, Desiring the Kingdom focuses education around the themes of liturgy, formation, and desire. Smith's ultimate purpose is to re-vision Christian education as a formative process that redirects our desire toward God's kingdom and its vision of flourishing. In the same way, he re-visions Christian worship as a pedagogical practice that trains our love."James Smith shows in clear, simple, and passionate prose what worship has to do with formation and what both have to do with education. He argues that the God-directed, embodied love that worship gives us is central to all three areas and that those concerned as Christians with teaching and learning need to pay attention, first and last, to the ordering of love. This is an important book and one whose audience should be much broader than the merely scholarly."--Paul J. Griffiths, Duke Divinity School"In lucid and lively prose, Jamie Smith reaches back past Calvin to Augustine, crafting a new and insightful Reformed vision for higher education that focuses on the fundamental desires of the human heart rather than on worldviews. Smith deftly describes the 'liturgies' of contemporary life that are played out in churches--but also in shopping malls, sports arenas, and the ad industry--and then re-imagines the Christian university as a place where students learn to properly love the world and not just think about it."--Douglas Jacobsen and Rhonda Hustedt Jacobsen, Messiah College; authors of Scholarship and Christian Faith: Enlarging the Conversation"This is a wise, provocative, and inspiring book. It prophetically blurs the boundaries between theory and practice, between theology and other disciplines, between descriptive analysis and constructive imagination. Anyone involved in Christian education should read this book to glimpse a holistic vision of learning and formation. Anyone involved in the worship life of Christian communities should read this book to discover again all that is at stake in the choices we make about our practices."--John D. Witvliet, Calvin Institute of Christian Worship; Calvin College and Calvin Theological Seminary
-Publisher

The Wisdom Pyramid: Feeding Your Soul in a Post-Truth World
Brett McCracken
Paperback