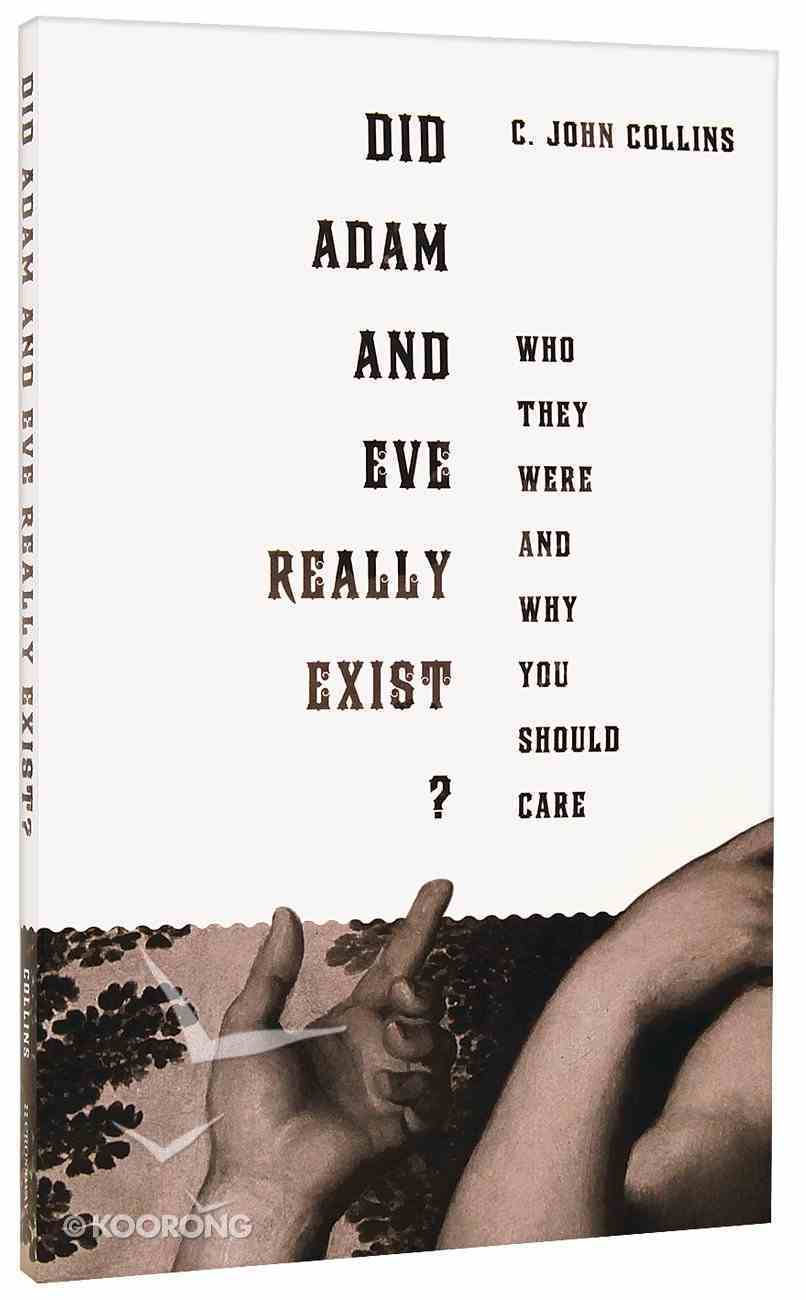 Did Adam and Eve Really Exist? Who They Were and Why You Should Care

"We need a real Adam and Eve if we are to make sense of the Bible and of life," argues C. John Collins. Examining the biblical storyline as the worldview story of the people of God, Collins shows how...

Did Adam and Eve Really Exist? Who They Were and Why You Should Care
C John Collins
eBook

Thinking Rightly of Christ: What Scripture Really Says About Him-And Why It Matters
Brian Holstrom
eBook

Who is Jesus, Really?
eAudio

"We need a real Adam and Eve if we are to make sense of the Bible and of life," argues C. John Collins.
Examining the biblical storyline as the worldview story of the people of God, Collins shows how that story presupposes a real Adam and Eve and how the modern experience of life points to the same conclusion.


^^Applying well-informed critical thinking to common theological and scientific questions, Collins asserts the importance of a real man at the beginning in God's plan for creation, a plan that includes "redemption" for all people since sin entered the world.


^^Did Adam and Eve Really Exist?: Who they were and Why You should care addresses both biblical and Jewish texts and contains extensive appendices to examine how the material in Genesis relates to similar material from Mesopotamian myths. Collins's detailed analysis of the relevant texts will instill confidence in readers that the traditional Christian story equips them better than any alternatives to engage the life that they actually encounter in the modern world.
-Publisher.


aDr. Collins has presented a careful defense of the existence of the historical Adam and Eve. This methodologically rigorous study reflects a critical awareness of contemporary discussions on both biblical and extra-biblical literature and further contributes to the wider discussion on science and religion. Perhaps more importantly, he has successfully demonstrated the theological significance of this traditional reading, all the while using language that an informed layperson can digest and engage. This work deserves to be widely circulated.a -David W. Pao, Chair of the New Testament Department, Trinity Evangelical Divinity School aWorking through questions of myth and history, Bible and science, harmonization and complementarity, Collins brings fresh arguments to stimulate wide-ranging thought and improved appreciation of the way the first chapters of the Bible affect the whole.a -Alan Millard, Emeritus Rankin Professor of Hebrew and Ancient Semitic Languages, The University of Liverpool aI could hardly imagine a more honestbook on this controversial topic. Its openness (in a user-friendly format) is no naivety-it is combined with undeniable competenceon the ancient Near East, recent literature, and methodological discussions. Standing firm on vital issues, accepting diversity on others, the reader meets in C. John Collins a sensitive and godlyguide.a -Henri A. Blocher, formerly Gunther Knoedler Professor of Systematic Theology, Wheaton College Graduate School aFew scholars are better equipped than Professor C. John Collins to provide a well-informed, up-to-date assessment of what may and may not be known about Adam and Eve. With clarity, Collins offers a balanced discussion of the relationship between Genesis 2ao3 and current theories on the origins of the human race. Recognizing the limitations of human knowledge, he highlights the vital contribution made by the Genesis account for understanding the human predicament. Marked by both erudition and sanity, here is a book worth reading.a -T. Desmond Alexander, Senior Lecturer in Biblical Studies and Director of Postgraduate Studies, Union Theological College aCollins has done a great service to the church by providing us with this crucial volume. It will quickly prove to be a vital resource for pastors, students, and laypeople around the world. With careful scientific analysis and convincing biblical exegesis, Collins graciously answers the skeptics and thoroughly reinforces the historic Judeo-Christian position.a -Burk Parsons, Associate Pastor, Saint Andrew''s Chapel, Sanford, Florida; editor, Tabletalk magazine aIn a sense, the way one reads the first few chapters of Genesis will determine his or her way of reading the whole Bible. Dr. Collins has expounded in a lucid manner how the original narrator intended this vital part of the Bible to be read. Cogency combines with erudition to make this book worthy of appreciation by those who do not espouse his general stance, as well as by readers who may be unaware of their own premises.a -Nobuyoshi Kiuchi, Professor of Old Testament, Tokyo Christian University aThis book will boost your confidence in the Bible, especially in its capacity to address a common experience of all peoples. By treating the Bible as Scripture, Collins has modeled for us how Christians should approach the faith-science questions. The Bible has answers to the human predicaments and needs. Only if what it says is true can we truly make sense and move forward in this sinful world. The real payoff of this book goes beyond the unequivocal biblical witness of Adam and Eveas historical existence. For it is the human dignity based on our common ancestry and a shared perception of sensing the abnormality of this world that open a way for the redemption and restoration of all peoples through the reallife and works of the second Adam.a -Natee Tanchanpongs, Academic Dean, Bangkok Bible Seminary aI commend this book merely for the courage of taking the adventure in addressing this debated issue biblically and scientifically. Even if the reader does not fully agree with Collinsas conclusions he/she is compelled to listen carefully to his arguments.a -Riad A. Kassis, Regional Director, Overseas Council for Middle East, North Africa, and Central Europe; adjunct professor of Old Testament, Arab Baptist Theological Seminary, Lebanon aIt is not often that a book in this controversial field of human origins takes seriously both the Bible (in terms of textual exegesis, literary form, and theological coherence) and science (in terms of its findings and its theoretical possibilities). Jack Collins does both with graciously applied scholarship, conviction, and humility, making very clear where biblical faithfulness requires us to be uncompromisingly affirmative, and where there is room for varying opinion over possible scenarios that could be consistent with such biblical conviction.a -Christopher J. H. Wright, International Director, Langham Partnership International; author, The Mission of God
-Publisher

Throughout history, most Christians have believed that Adam and Eve were actual persons, of whom we are all descendants. Some Christians today, however, readily dismiss the historical consensus, arguing that those same Christians also believed the earth was the center of the universe. Understandably, there are reasons to doubt the traditional view . . . and yet rarely are those doubts humbly subjected to serious scholarship.


C. John Collins invites both doubts and scholarship to the table. Applying well-informed, critical thinking to questions raised by theologians and scientists alike, Collins examines the historicity and relevance of a real Adam and Eve, ultimately answering the questions: Did Adam and Eve really exist? And why should we care?

C John. Collins (Ph.D., School of Archaeology and Oriental Studies, University of Liverpool, Liverpool, England)is professor of Old Testament at Covenant theological Seminary in St. Louis, and one of this generation's most skilled Bible exegetes.