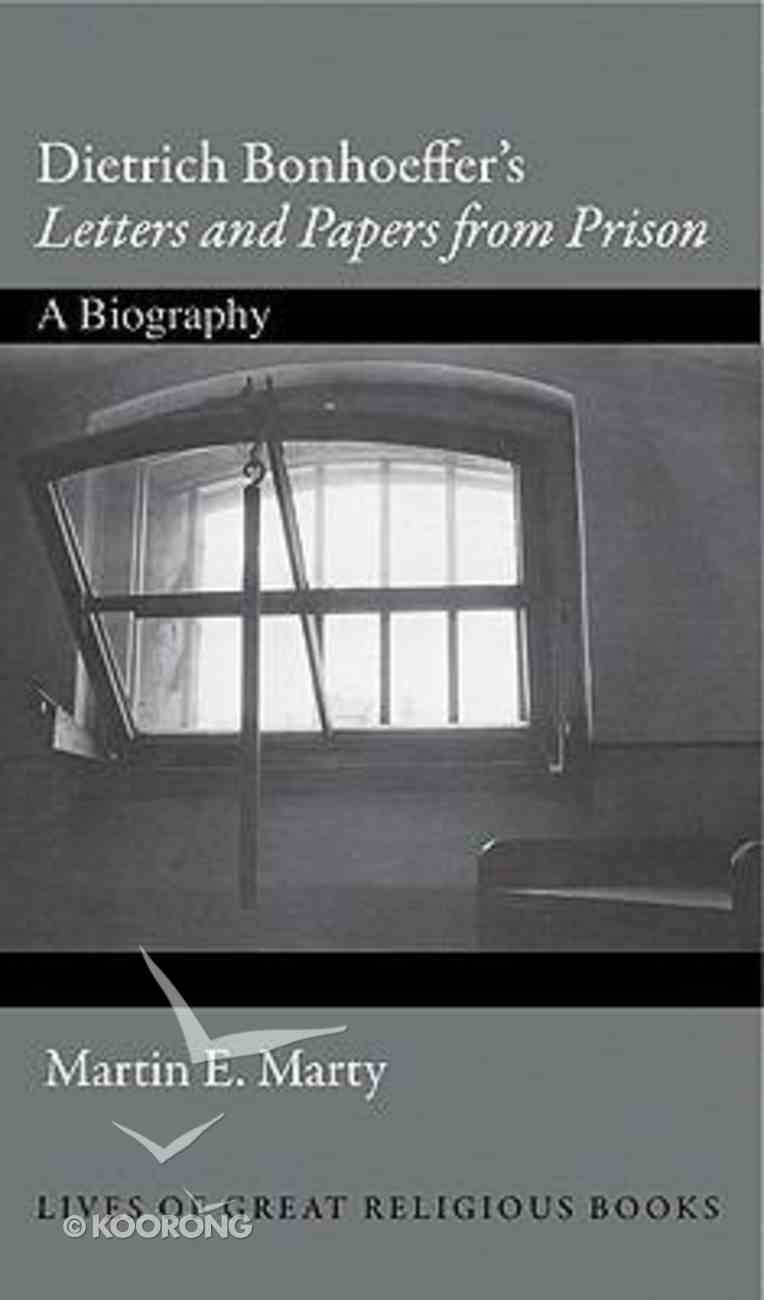 Dietrich Bonhoeffer's "Letters and Papers From Prison": A Biography

"Martin Marty's biography of Dietrich Bonhoeffer's widely acclaimedLetters and Papers from Prisonis riveting. It was difficult to put it down. Under Marty's assured direction we are led on a fascinating journey from a Nazi prison cell to the then-East and...

"Martin Marty's biography of Dietrich Bonhoeffer's widely acclaimedLetters and Papers from Prisonis riveting. It was difficult to put it down. Under Marty's assured direction we are led on a fascinating journey from a Nazi prison cell to the then-East and West Germany, the rest of Europe, the United States, Latin America, Africa, and Asia to learn how this book meant so many and such different things to its varied audiences. We come away from Marty's opus thankful and exhilarated: deeply thankful that Bonhoeffer's brother-in-law Bethge preserved these 'letters and papers,' and exhilarated to discover yet again how God's deep reverence for our creaturely autonomy and integrity allows for such different apprehensions of the irruption of the divine. We are therefore enormously indebted to Marty for this biography."--Desmond Tutu, Archbishop Emeritus, Cape Town "There is nothing else like this history of Bonhoeffer's Letters and Papers from Prison. Martin Marty writes with equal clarity and empathy of the Socialist, Catholic, Evangelical, and liberal Protestant receptions of the book. And Marty's book has an autobiographical dimension that others cannot match because he has been an informed observer--and sometimes participant--in many of the theological movements and controversies he describes."--Stephen Haynes, author ofThe Bonhoeffer Phenomenon: Portraits of a Protestant Saint "This is a book with many unexpected discoveries. It is intriguing to read howBonhoeffer's Letters and Papers from Prisoncame into being and even more so to learn how it was interpreted and misinterpreted. In fact, it is mind-boggling to discover how the same book has been claimed by East German Marxists, Evangelicals, God-is-dead theologians, mainline Protestants and Catholics, and secularists. Martin Marty is a great scholar and has done us a great service."--Peter Frick, editor ofDietrich Bonhoeffer: Meditation and Prayer
-Publisher

For fascination, influence, inspiration, and controversy,Dietrich Bonhoeffer's Letters and Papers from Prisonis unmatched by any other book of Christian reflection written in the twentieth century. A Lutheran pastor and theologian, Bonhoeffer spent two years in Nazi prisons before being executed at age thirty-nine, just a month before the German surrender, for his role in the plot to kill Hitler. The posthumousLetters and Papers from Prisonhas had a tremendous impact on both Christian and secular thought since it was first published in 1951, and has helped establish Bonhoeffer's reputation as one of the most important Protestant thinkers of the twentieth century. In this, the first history of the book's remarkable global career, National Book Award-winning author Martin Marty tells how and whyLetters and Papers from Prisonhas been read and used in such dramatically different ways, from the cold war to today.


In his late letters, Bonhoeffer raised tantalizing questions about the role of Christianity and the church in an increasingly secular world. Marty tells the story of how, in the 1960s and the following decades, these provocative ideas stirred a wide range of thinkers and activists, including civil rights and antiapartheid campaigners, "death-of-God" theologians, and East German Marxists.


In the process of tracing the eventful and contested history of Bonhoeffer's book, Marty provides a compelling new perspective on religious and secular life in the postwar era.

Martin E. Marty (Ph.D., University of Chicago) is the Fairfax M. Cone Distinguished Service Professor Emeritus at the University of Chicago, where he taught for thirty-five years. His many honors include the Medal of the American Academy of Arts and Sciences. Among his many books are Righteous Empire - for which he won the National Book Award and the three-volume Modern American Religion. Visit the author's Web site at www.illuminos.com
Recent publications include World Christianity: A Global History (Random House); The Mystery of the Child (Eerdmans. 2007) and Building Cultures of Trust (Emory University Studies in Law and Religion, Eerdmans, 2010).
Koorong -Editorial Review.