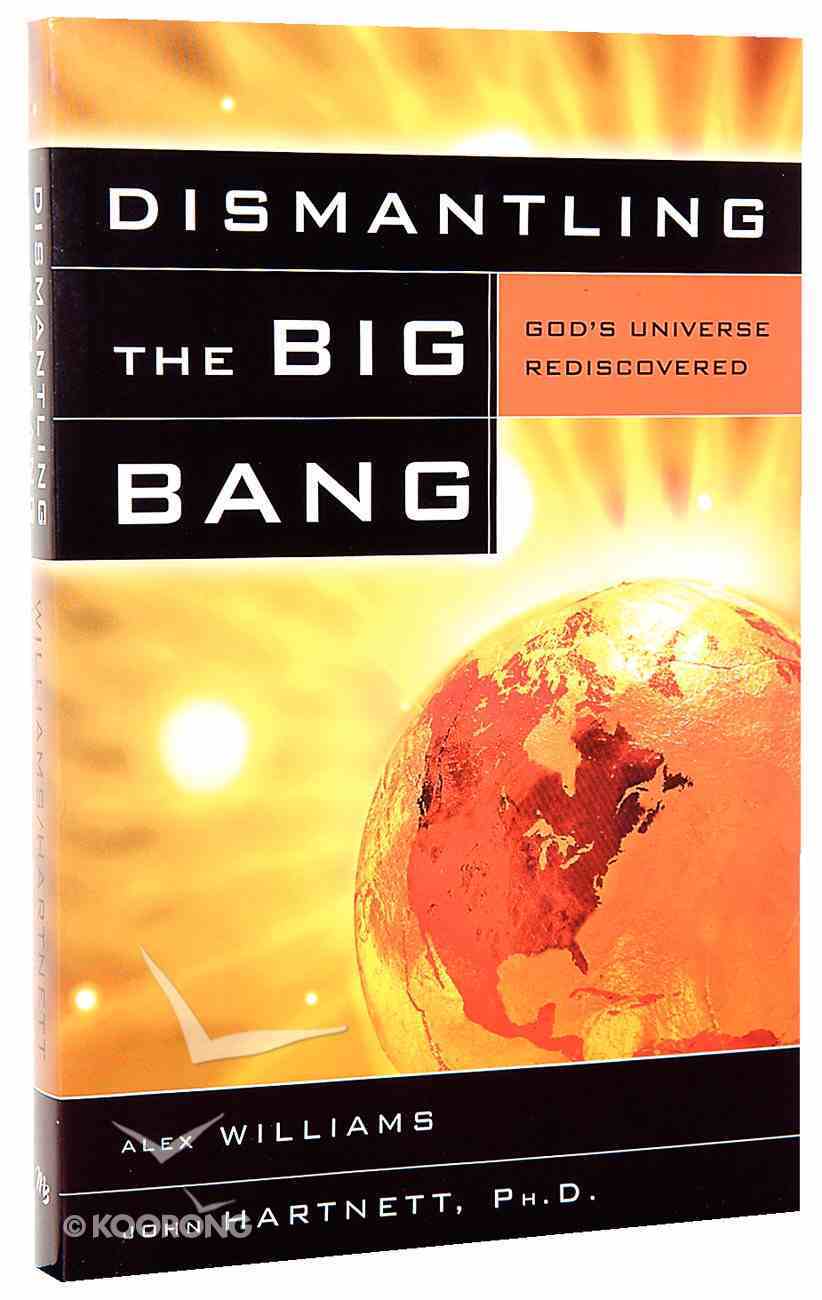 Creation scientists Alex Williams and John Hartnett provide an expert critique of the 'Big Bang' theory, which has become virtually a scientific orthodoxy. They demonstrate scientifically the major flaws and contradictions in the notion of 'cosmic evolution', which undermines the...

Creation scientists Alex Williams and John Hartnett provide an expert critique of the 'Big Bang' theory, which has become virtually a scientific orthodoxy. They demonstrate scientifically the major flaws and contradictions in the notion of 'cosmic evolution', which undermines the plain teachings of the Bible. 346 pages, from Master Books.

The errors of the big bang exposed scientifically in layman's language. This powerful resource answers the age old cosmology debate and includes with its pages: A brief history of scientific cosmology The big band model, including origins of stars, planets, and life The creation model, including the views of Moses and Jesus Other cosmological models, including future trends The errors in evolutionary times scales, time indicators and ages Appendixes and comprehensive index
-Publisher

Dr. John Hartnett received both his B.Sc. and his Ph.D. with distinction from the University of Western Australia. He currently works as an ARC QE II post-doctoral research fellow with the frequency standards and metrology research group there. He has published more than 98 scientific papers in secular journals and has two patents.
-Publisher

This powerful resource shows that the big-bang theory cannot explain the universe, but the Bible can, so Christian leaders no longer have reason to insert big-bang theory into Genesis. It includes within its pages: Easy summaries of all the main points A brief history of cosmology The big bang model, including origins of stars, planets, and life The biblical creation model, including the views of Moses and Jesus The errors in evolutionary time scales In modern times, the Bible has become increasingly disconnected from most Christians understanding of the real world. Cosmology the way we think about the universe has come to be totally dominated by secular beliefs, such as the Big Bang. Many Christians, including prominent leaders, have therefore felt compelled to oreinterpret the Bible in the light of big-bang thinking. To its credit, the Big Bang is an interesting and worthwhile scientific theory, and it is the best candidate that materialists have been able to put forward to this point to try to explain the universe without God, but it is demonstrably inadequate, to say the least. Big-bang theory cannot explain the origin of the universe or of the significant objects within it (i.e., galaxies, stars, planets, and people). Big-bang theory contains no credible or consistent naturalistic cause to explain what we see. Dismantling the Big Bang reveals these scientific and philosophical weaknesses at the core of big-bang thinking and the contradictions to which they lead. Written on a level that laypeople can understand, it comparatively shows the intellectual superiority of the history of the universe given in the Bible as a basis for our thinking about the cosmos. We need to rediscover how to think about the universe in the only way that makes sense from Gods perspective, in the light of the history given in His Word.
-Publisher

Alexander Williams B.Sc., M.Sc.(Hons), Th.C., Dip.C.S., ThL., is a part-time science writer and committe member for Creation Ministries International, an honorary botanist in Western Australia and has spent 24 years as a government botanist and seven years in missionary work. He has an undergraduate degree (botany) from the University of New England followed by honours work and a Master of Science (Honours) degree in radioecology from Macquarie University which led to national and international recognition.He was elected to membership of the Australian Institute of Biology in 1989. Gaining a Certificate in Theology from Moore Theological College, Alex and his wife responded to the call to missionary work in 1990 and went to India for a year. He attained several more theological qualifications and served with the Anglican Mission to seamen at Dampier in northwest Western Australia from 1993-96 before moving to Perth where he gained a Licentiate in Theology from the Australian College of Theology. His key areas of expertise are in botany, radioecology, radiochemistry and statistics and he has published in all these areas. But a personal interest in cosmology and popular science writing also led to a recently completed book entitled Dismantling the Big Bang: God's Universe Rediscovered co-authored with physicist Dr John Hartnett from the University of Western Australia. Alex reasons that it is logically absurd for Christians to worship the God of the Bible as Creator and yet not believe what He says on the subject of creation. He wants to help restore that foundation so that the church can reclaim its heritage-the worship of a Creator who is clearly revealed in His work of creation. He is married to Barbara, has 3 daughters, and 3 grandchildren.- Publisher.

John Hartnett holds both B.Sc. (hons) and a PhD with distinction from the Physics Dept, at the University of Western Australia. He now works with the Frequency Synthesis and Metrology Group in the School of Physics, UWA holding the rank of Associate Professor. Between 1974 and 1996 he worked in various countries as a well as, for several years, worked at developing and marketing microwave sensors. John has a keen interest in cosmology and how it applies to the creationist world-view. He has also developed new physics that has established there is no need to assume the existence of dark matter in the universe. He has published more than 120 papers in scientific journals and holds 2 patents. He is the co-author of Dismantling the Big Bang: God's Universe Rediscovered with Alex Williams.- Publisher.