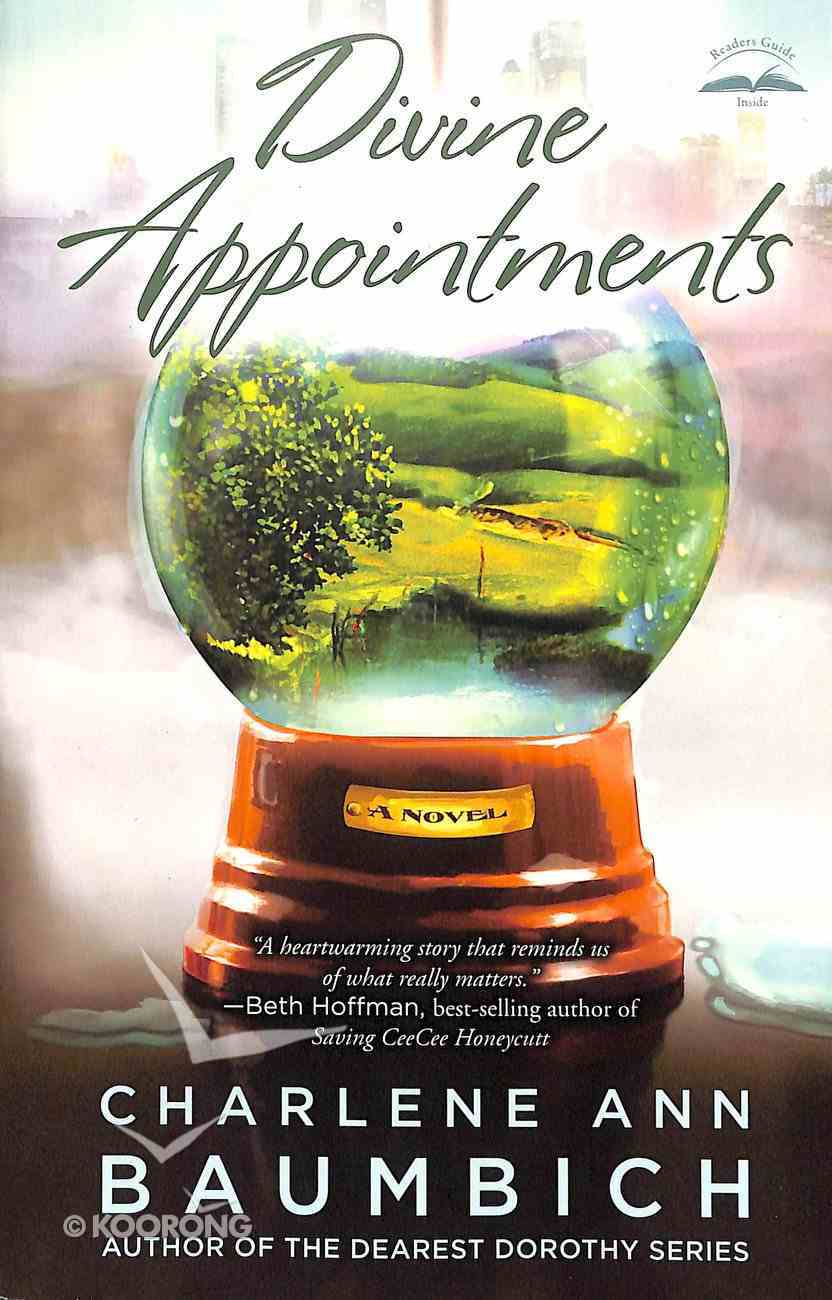 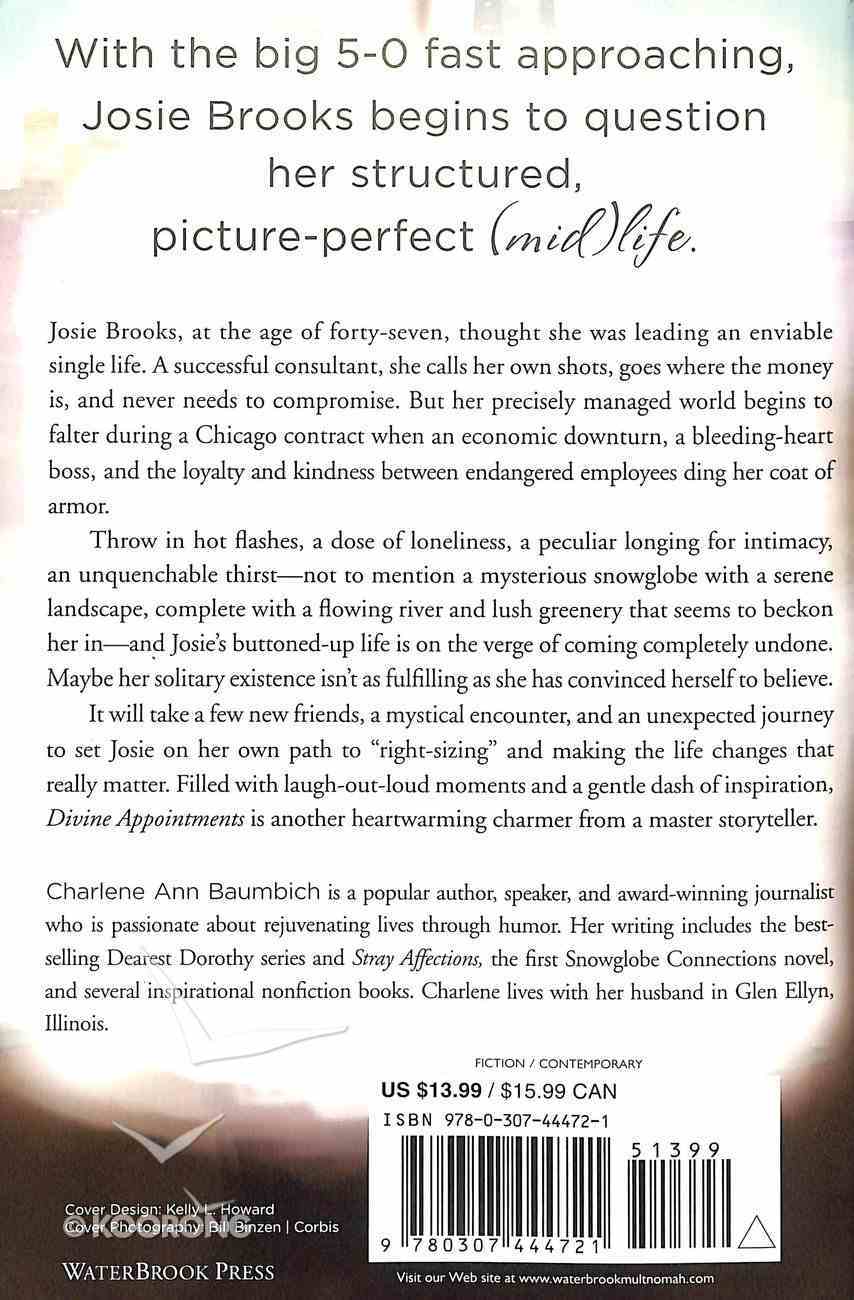 With the big 5-0 fast approaching, Josie Brooks begins to question her structured, picture-perfect (mid)life.    Josie Brooks, at the age of 47, thought she was leading an enviable single life. A successful consultant, she calls her own shots,...

Josie Brooks, at the age of 47, thought she was leading an enviable single life. A successful consultant, she calls her own shots, goes where the money is, and never needs to compromise. But her precisely managed world begins to falter during a Chicago contract when an economic downturn, a bleeding heart boss, and the loyalty and kindness between endangered employees ding her coat of armor.

Throw in hot flashes, a dose of loneliness, a peculiar longing for intimacy, an unquenchable thirst—not to mention a mysterious snowglobe with a serene landscape, complete with a flowing river and lush greenery that seems to be beckoning her in—and Josie’s buttoned-up life is on the verge of coming completely undone. Maybe her solitary existence isn’t as fulfilling as she has convinced herself to believe.

It will take a few new friends, a mystical encounter, and an unexpected journey to set Josie on her own path to “right-sizing” and making the life changes that really matter. Filled with laugh-out loud moments and a gentle dash of inspiration, Divine Appointments is another heartwarming charmer from a master storyteller.

Attempting to release the stifling heat from her body, Josie threw back the covers and heaved a sigh. Stuck in her languid, sweltering, hot-flashing body, she rolled out of bed, shucked off her damp pajamas, and dragged herself down the hall. Within a few moments, she stood in her kitchen, eyes closed, head stuck in her freezer.
Who would believe that at 2 a.m. on a below-freezing February morning in Chicago, I’d be standing here like this? Up until a minute ago, certainly not her. Hoping she was trapped in a nightmare, she willed herself to open her eyes. Wake up! But instead of pulling out of a deep slumber, she looked straight into the swirling curls of mist flowing over a low-cal frozen dinner four inches from her lips.
While waving freezer air toward her sweaty armpits, she surveyed the items before her. Healthy everything. See, I am sane. So what has led me to such a preposterous moment? But she knew. Same as always, her course of action was set as a result of last night’s Internet research.
Research: her instinctive course of action against the unknown.
In an attempt to find something—anything—short of hormone replacement therapy to help her through what she hoped was a brief perimenopausal stage, she’d clicked from one medical and holistic site to the next. One set of survey results reported that some women stuck their heads in the freezer for relief. Her initial reaction upon reading that finding had been, Not in a million years. But when this tsunami of a hot flash rolled into her forty-seven-year-old body, the idea rose to the forefront, and desperation led her straight to the kitchen. Much to her surprise, the bizarre procedure seemed to help. Or had the flash simply begun to subside already?
Always analyzing, Josie. Give it a rest. Who cares why? You feel better, and that’s the goal, she thought, her eyes landing on a small container of frozen yogurt tucked behind a bag of broccoli. But as she reached for it, a chill quaked her body. She closed the freezer door, crossed her arms over her bare chest, and quickly padded back toward her bedroom. Once the hot flash retreated, the reality of the cool temperature in her condo set in.
Even though she had no need to pinch pennies, she still tried to look after her dollars.The first thing she did when she moved into a new dwelling—an annual event—was swap out the thermostat for the latest and best energy-efficient model. During the winter, she programmed it to sixty-five during weekdays, then up to sixty-eight in the early evenings after she got home from work, and down to sixty-two at night. Summers, well… When the flashes began last July, she often found herself lowering the temperature a notch no matter what she’d programmed.
In the faint red glow of her bedside clock, she opened her dresser drawer and withdrew a powder blue cotton pajama set with three quarter-length sleeves. Counting the set of pajamas still on the floor, and in keeping with her lifelong motto to simplify, it was one of four identical sets, all pastel blue, all worn year round. Shivering, she scooped the soiled pj’s off the floor and scurried to the master bathroom. She turned on the light, ran warm water on a washcloth, and wiped her face and neck and then behind her ears. She gulped a glass of water, slipped on the clean pajamas, and smeared a dab of night cream over her cheeks, then laid the damp items over the top of the hamper to dry. “No sense risking mildew,” she heard her Grandmother Nancy say.
Grandmother Nancy had dealt with bountiful piles of laundry produced by seven children. “It doesn’t take long for damp things to sprout moldy wings,” she used to say in a singsongy voice. Josie smiled at the memory of one of her many sayings.
Once back in bed, she drew the flannel sheets up to her nose. “Freezer to flannel? Come on, body!” she chided, tired, yet now wide awake. Although occasional daytime hot flashes were annoying and embarrassing, the sleep deprivation these rampant night sweats caused was wearing her out. The last time she looked at the clock, it said 3:15 a.m.
Next thing she knew, her alarm was ringing. Five-thirty. Time to get up and work out.