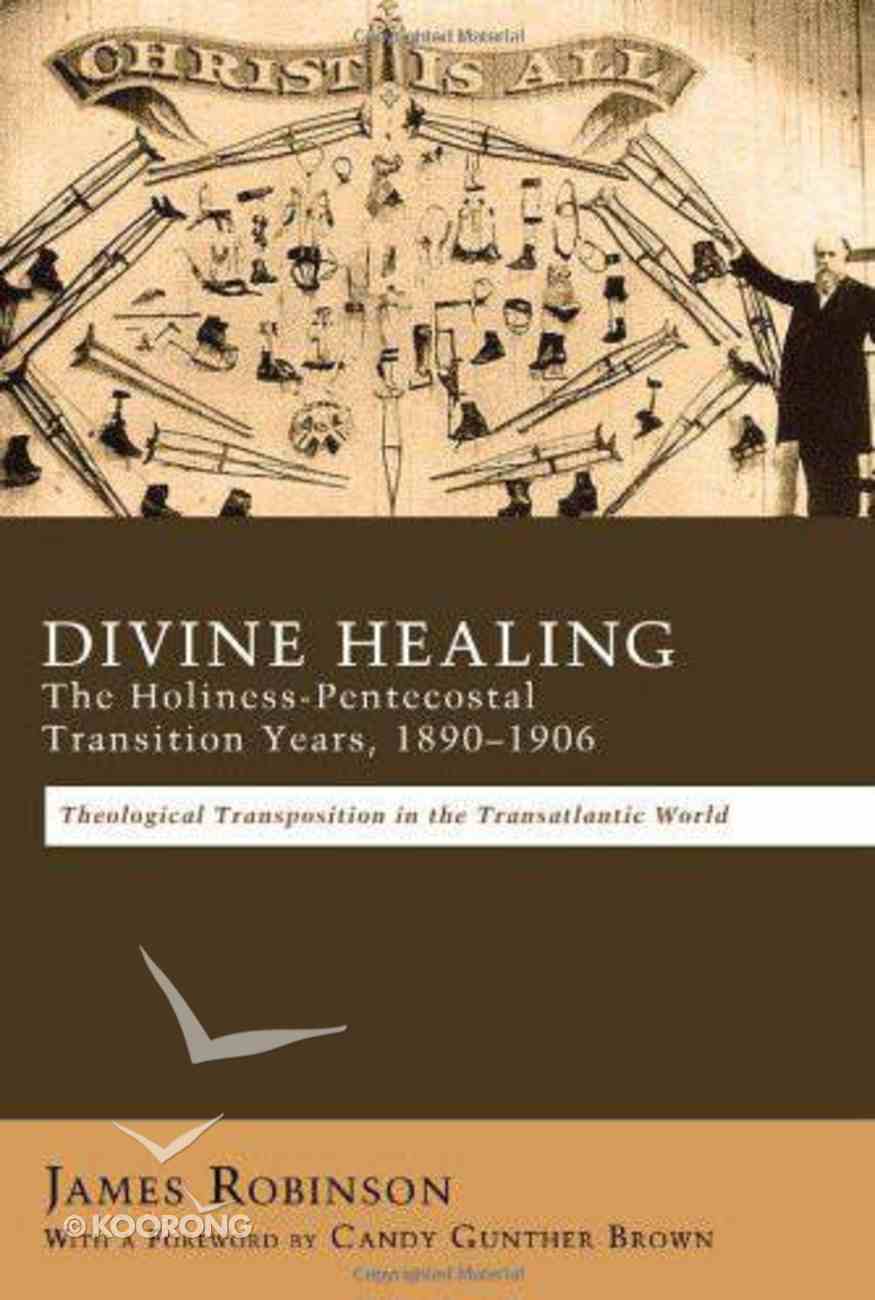 Synopsis: In the present volume, James Robinson shows how the Holiness movement contributed to the rise of Pentecostalism, with emphasis on those sectors that practiced divine healing. Although other scholars have undertaken to explore this story, Robinsons treatment is by...

Synopsis: In the present volume, James Robinson shows how the Holiness movement contributed to the rise of Pentecostalism, with emphasis on those sectors that practiced divine healing. Although other scholars have undertaken to explore this story, Robinsons treatment is by far the most thorough examination to date. He draws productively on the burgeoning secondary literatures on Pentecostalism and healing, and brings to light frequently overlooked, yet revealing primary sources. The events narrated are fascinating in their own right, and are important to the histories of Pentecostalism and healing for how they clarify the processes by which divine healing was pursued, debated, and often disparaged. The text also contributes to larger medical and social histories, offering tantalizing glimpses of the roots of some of todays most popular and contested medical and religious responses to sickness and health. Endorsements: "This is another fine volume from James Robinson, following on Pentecostal Origins and Divine Healing: The Formative Years. Here he sheds new light on how developments within evangelicalism in the area of divine healing . . . helped shape Pentecostalism. Robinson has produced an exciting book on an important topic--one of continuing relevance. His work combines careful historical scholarship and a high degree of accessibility." --Ian Randall, Senior Research Fellow, International Baptist Theological Seminary "The Holiness Movement of the later nineteenth century generated a ferment surrounding the doctrine of healing by faith in the atonement. By the helpful technique of a series of detailed vignettes, James Robinson traces the course of opinion on the subject. The result is an illuminating study on the powerful influence of this body of thought on the emergent Pentecostal Movement at the opening of the twentieth century." --David Bebbington, Professor of History, University of Stirling "James Robinsons second volume in a promised trilogy on divine healing in the nineteenth and early twentieth-century Holiness and Pentecostal Movements is an important addition to this field of study. . . . Robinson provides a careful and judicious analysis of the emergence, development, and uneven legacies that have resulted from the best practices and worst excesses in the divine healing claims of these vital movements." --Cecil M. Robeck Jr., Professor of Church History and Ecumenics, Fuller Theological Seminary "Taken together, Robinsons books represent a monumental achievement. Although other scholars have covered similar ground, Robinsons treatment is unparalleled in depth. . . . The result . . . is an authoritative treatise that will become required reading for students of Pentecostalism, healing movements, and the history of Christianity." --Candy Gunther Brown, Associate Professor, Indiana University Author Biography: James Robinson was awarded his doctorate from Queens University Belfast. He is the author of Pentecostal Origins: Early Pentecostalism in Ireland in the Context of the British Isles (2005) and Divine Healing: The Formative Years, 1830-1890 (2011).
-Publisher

James M. Robinson is the former director of the Institute for Antiquity and Christianity and professor emeritus at the Claremont Graduate School. He is the author of "Trajectories Through Early Christianity, A New Quest of the Historical Jesus, " and "The Secrets of Judas", and is widely known for his pioneering work on the Sayings of Gospel Q, the Nag Hammadi Codices and as the general editor of "The Nag Hammadi Library in English".