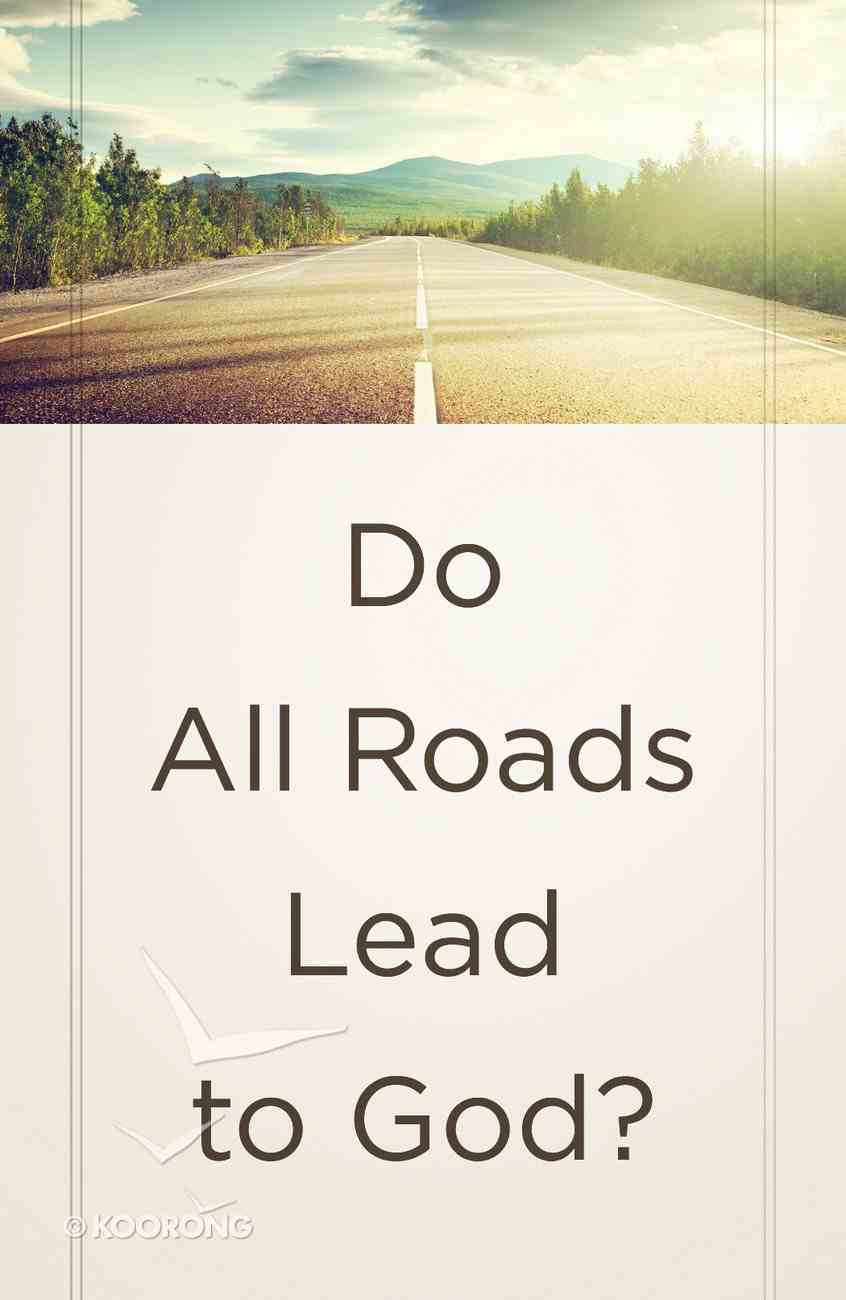 : There is a common belief today that "All roads lead to God." While it is noble to respect each other's religious faith, the Bible teaches that the only way a person can be reconciled to God is on God's...

:
There is a common belief today that "All roads lead to God." While it is noble to respect each other's religious faith, the Bible teaches that the only way a person can be reconciled to God is on God's terms. Here are five "landmarks" that set Christianity apart from other roads.


The Bible is the only inspired, infallible Word of God! Historians agree as to the authenticity of the New and Old Testament writings, and contrary to popular belief, transmission of the text was completed with 99.99% precision (determined by textual criticism and comparisons of thousands of existing manuscripts). Conclusive evidence for the infallibility of the Bible includes: the bibliographical test; historical and archaeological confirmations; the Bible's harmony and unity (considering it contains 66 books written over 1,500 years, by 40 authors on 3 continents); and the Bible's fulfilled predictive prophecies. There were 330 specific prophecies about the coming Messiah in the Old Testament-fulfilled with 100% accuracy in the life of Jesus centuries later! God spoke to the Old Testament prophets revealing history in advance because He is outside of time. The Bible itself declares, "All scripture is given by inspiration of God [by the Holy Spirit]...."


Compare: No other "written religious authority" in history has provided such purity of text, such historical/archaeological confirmations, and such extensive prophecy fulfilled anywhere near 100% accuracy!


God Himself is the founder of Christianity. The God of the Bible is the eternal, triune God (the Father, the Son, and the Holy Spirit). He is the creator and sustainer of all life, creating the human race to enjoy a relationship with Himself. Jesus Christ is the Second Person of the Trinity-God the Son. Jesus humbly took the form of a man and came to earth as Savior to redeem us.


Jesus predicted to His disciples that He would die and then rise from the dead three days later, an event which would validate His claims to be God! He did not try to escape death on the cross, but He submitted to it. "Behold! The Lamb of God who takes away the sin of the world!"


Compare: All other religions' "founders" were mere men, not God Himself!


"For God so loved the world that He gave His only begotten Son, that whoever believes in Him [Jesus] should not perish but have everlasting life" (John 3:16)! God the Father gave up His Son for us. His gift of eternal life is free to us, but it cost Him crucifixion. God loves every person with an unconditional, divine love! He created us to live in relationship with Him, but the Bible says that sin and death entered the world through Adam, (in the garden of Eden). Thus, all humanity is guilty of sin. (going against God. Romans 3:23).


The penalty of sin is spiritual death (Romans 6:23), but Jesus willingly died on the cross, in our place, to pardon us. If we were to ask God to prove His love for us, He would point to the CROSS! The cross was the supreme demonstration of God's love for us!


Compare: No other religions' "founders" loved people so perfectly, nor sacrificed so greatly to prove it! Other religions require human works for redemption. The Good News of Christianity is that God has provided us with the way to Himself.


The resurrection of Jesus Christ is the central pillar of Christianity, and the evidence for its historicity is conclusive. We have the actual eyewitness accounts of this event (the gospels of Matthew, John, etc.); the empty tomb (despite the Roman guards and strict precautions), the transformation of the apostles, and the post-resurrection appearances of Jesus. By His resurrection Jesus conquered sin and death, thereby offering new life, eternal life, to us! Jesus declared, "I am the resurrection and the life. He who believes in Me, though he may die, he shall live."


Compare: No other religions' "founders" ever conquered death by resurrection (returning to life).


Jesus Christ claims to be the only way to eternal salvation (life in heaven). In His own words Jesus declared: "I am the way, the truth, and the life. No one comes to the Father except through Me" (John 14:6). Our eternal destiny depends on our personal decision, whether to trust in the only One who can settle our "sin issue" so we can commune with God.


Logically, if there really is a God, then we must come to Him by His own prescribed way! That prescribed ROAD, according to the God of the Bible, is by FAITH in Jesus Christ! Religions are based on various systems of works, whereas Christianity is based on Jesus and what He has already done for us!


Compare: Other religions and philosophies claim that all roads lead to God, but their contradictory beliefs cannot be reconciled.


It cannot be true that "All roads lead to God."


When we consider the various teachings about God from different religions, we see that they cannot all be true. They contradict each other in critical ways. God cannot at the same time be both impersonal and personal, both singular and triune, both finite and infinite, both knowable and unknowable. There is no way to reconcile the various worldviews, such as pantheism, monotheism, and polytheism. There-fore, logically, either none of them-or only one-is true! The real issue is Truth, an issue of infinite importance.


Jesus Christ voluntarily died on a Roman cross 2,000 years ago to pay the penalty for our sins and to demonstrate His love for us. He was "God Himself who came in the flesh"-the promised Messiah. He offers every person the free gift of eternal life. The Gospel of Grace is: Whoever believes in the biblical Jesus Christ-who lived, died, and then three days later resurrected-will have eternal life in heaven! Christianity is founded on a Person, not on a teaching system as with other religions. Christianity is a relationship. God longs to have a personal relationship with you through His Son, Jesus Christ. Jesus says: "Behold, I stand at the door and knock. If anyone hears My voice and opens the door, I will come in to him and dine with him, and he with Me."


Religion is man on a quest for God! Christianity is God reaching down to man!