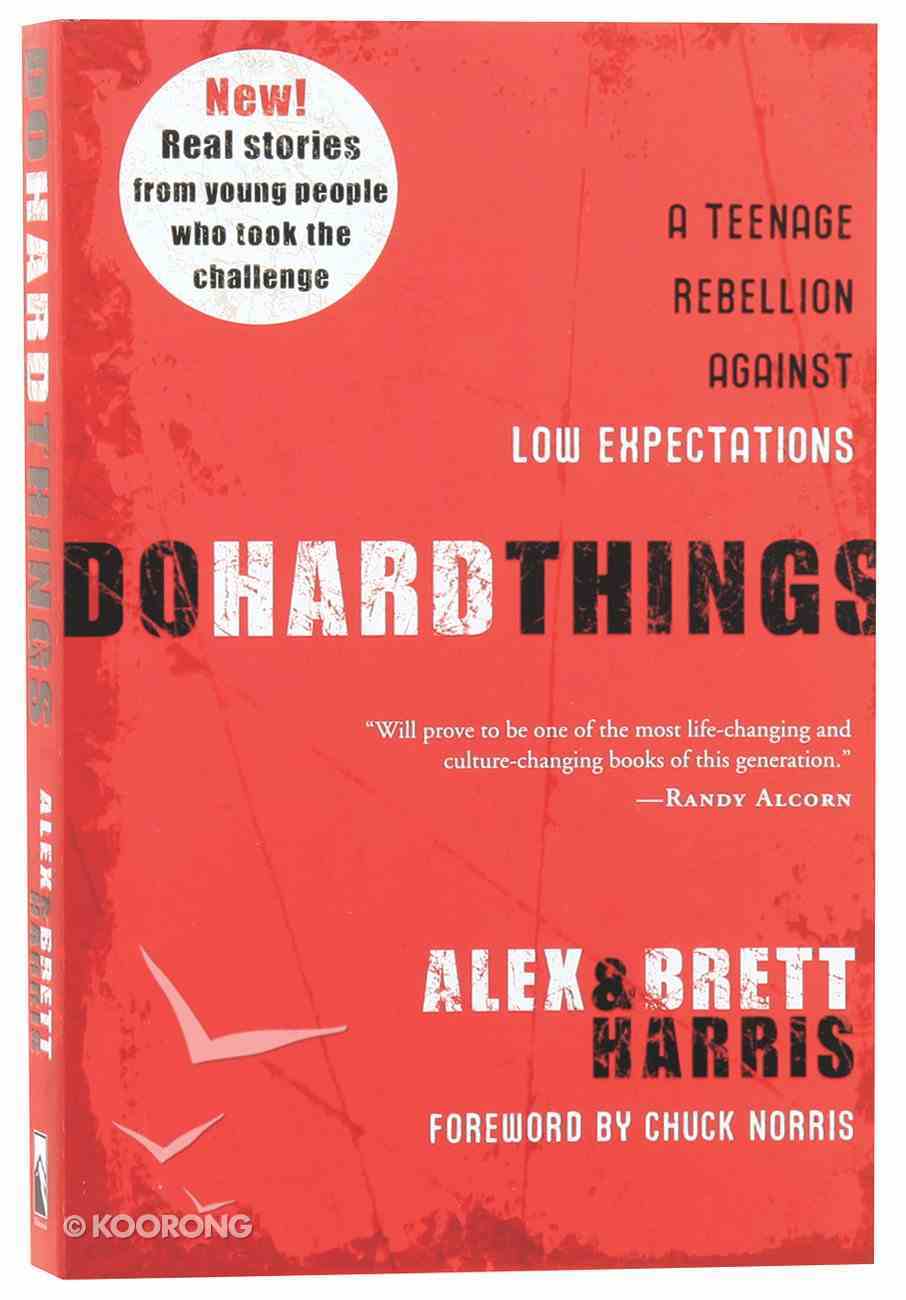 Do Hard Things: A Teenage Rebellion Against Low Expectations

The surprising message of Do Hard Things will resonate with young people who sense that they are being lulled into mediocrity by the consumer, "me"-obsessed values of pop culture. This book is the must-have manifesto for teens who are ready...

Beautiful in God's Eyes: The Treasures of the Proverbs 31 Woman
Elizabeth George
Paperback

The surprising message of Do Hard Things will resonate with young people who sense that they are being lulled into mediocrity by the consumer, "me"-obsessed values of pop culture. This book is the must-have manifesto for teens who are ready to attempt more and believe more for their lives, starting now. Do Hard Things weaves persuasive arguments from historical and contemporary sources with personal story and biblical principles to expose the negative effects of "the myth of adolescence," redefine the teen years as the launching pad of life, and motivate young people to reach for their true potential.

A generation stands on the brink of a "rebelution"

Do Hard Things is the Harris twins' revolutionary message in its purest and most compelling form, giving readers a tangible glimpse of what is possible for teens who actively resist cultural lies that limit their potential.

Combating the idea of adolescence as a vacation from responsibility, the authors weave together biblical insights, history, and modern examples to redefine the teen years as the launching pad of life. Then they map out five powerful ways teens can respond for personal and social change.

Written by teens for teens, Do Hard Things is packed with humorous personal anecdotes, practical examples, and stories of real-life rebelutionaries in action. This rallying cry from the heart of an already-happening teen revolution challenges a generation to lay claim to a brighter future, starting today.

Now includes:
--A new introduction from the authors, "Looking Back, Looking Ahead"
--Questions (and Stories) To Get You Started
--A list of 100 Hard Things to help inspire you
--A study guide for personal or group use
-Publisher

This is a different kind of teen book. Check online or walk through your local bookstore. You'll find plenty of books written by forty-somethings who, like, totally understand what it's like being a teenager. You'll find a lot of cheap, throwaway books for teens, because young people today aren't supposed to care much about books, or see any reason to keep them around. And you'll find a wide selection of teen books where you never have to read anything twice - because it's been dumbed down. Like, just for you.

What you're holding in your hands right now is a challenging, hardcover book for teens by two teens who believe our generation is ready for something different. Ready for something that doesn't promise you a whole new life if you'll just buy the right brand of jeans or use the right kind of deodorant. We believe our generation of young people is ready to rethink what teens are capable of, and what the teen years are all about. And we've noticed that once some wrong ideas are debunked and cleared away, our generation is quick to choose a better way, even if it's also more difficult.

Our teen years have been different than most, even radically so. We're 19-year-old twin brothers, born and raised in Oregon, taught at home by our parents, and striving to follow Christ while making more than our share of mistakes. Strangely enough, we've also served as interns at the Supreme Court of Alabama at 16, as grassroots directors for four statewide political campaigns at 17, and as authors of the most popular Christian teen blog on the web at 18. We've spoken to thousands of teens and parents at our conferences in the United States and internationally and reached millions online.

Some might think our experiences would make us unable to relate to the average teenager. But that doesn't really bother us because we don't believe average teenagers exist. We've witnessed the ideas in this book transform 'normal' teens into world-changers, and we've seen small handfuls of teens just like you accomplish incredible things when they're willing to break the mold of what society says they're capable of.

So the story starts with us, but it's really not about us. It's about something God is doing in the hearts and minds of our generation. We call it a teenage rebellion against low expectations. It's an exciting movement that is changing the attitudes and actions of teens around the world. And we want you to be part of it.

This book explores a few simple but far-reaching questions:
- Is it possible that even though many teens today have more freedom than any other generation in history, we're actually missing out on some of the best years of our lives?
- Is it possible that everything our culture tells us about the purpose and potential of the teen years is a lie, and that we are its victims?
- Is it possible that our teen years actually represent a once-in-a-lifetime opportunity to accomplish something huge - both for ourselves and for our generation?
- And finally, what would our lives look like if we set out on a different path entirely - a path that required more effort but promised a lot more reward, and ultimately, a lot more fun?

We describe that alternative path with three simple words: Do Hard Things.

What We Don't Mean
On the outskirts of a small town in Germany is the abbey of Dundelhoff. This small stone monastery is home to a particularly strict (and fictitious) sect of Dundress Monks who have each vowed to live a life of continual self-denial and discomfort.

Instead of wearing comfy t-shirts and well-worn jeans like most people, their clothing is either itchy shirts made from hair or painful chain mail worn directly over bare skin. Instead of a soft mattress, plush pillows, and warm blankets they choose to sleep on the cold stone floors of the abbey with not so much as a towel. You might remember reading somewhere that monks are fabulous cooks? Well, that might be true generally, but not about these monks. They eat colorless, tasteless sludge once a day. They drink only lukewarm water.

Which makes these miserable monks the poster boys for Do Hard Things. Right?

If you're like most people, your first reaction to the idea of 'do hard things' is something along the lines of, Hard you think nervously. Guys, I might need to be somewhere else right about now.

We understand your reaction. But we're not undercover monks plotting to make your life miserable. We're not recommending that you do just anything that's hard. For example, we're not telling you to rob a bank, jump off a cliff, climb Half Dome with your bare hands, or stand on your head for 24 hours straight. And we're certainly not telling you to work harder so you can earn God's favor.

But here's what we are doing. We are challenging our peers to grab hold of a much better option than what the world is offering. It's an option that has somehow gotten lost in our culture and most people don't even know it. But we don't just want to tell you, we want to show you. In the pages ahead you're going to meet young people just like you who have rediscovered this better way -to reach higher, dream bigger, grow stronger, love and honor God, live with more joy - and quit wasting their lives.

That's the short version of what we mean by doing hard things.

Don't think of this book as a collection of nice opinions. Think of it more as an invitation to a revolution you don't want to miss. In Do Hard Things, we not only say there is a better way to do the teen years, we show you how we and thousands of other teens are doing it right now - and how you can as well.

Growing Up By the Book
Patricia Weerakoon
eBook

A Treasury of Miracles For Teens
Karen Kingsbury
Paperback