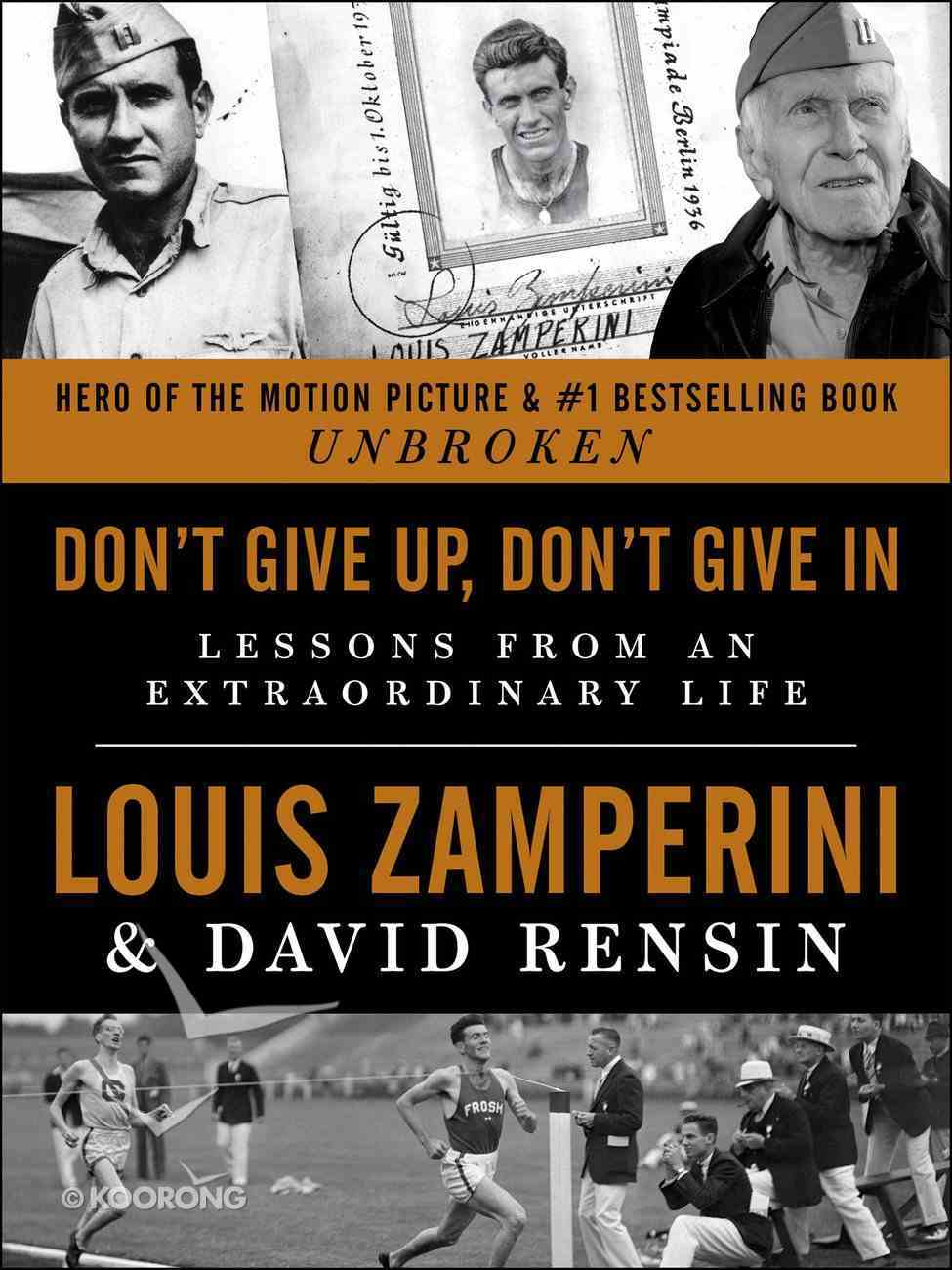 Champion. Survivor. Hero. Legend. Completed just two days before Louis Zamperini's death at age 97, Don't Give Up, Don't Give In shares a lifetime of wisdom, insight, and humor from one of America's most inspiring lives. Zamperini's story has...

Don't Give Up, Don't Give in
Louis Zamperini
eBook

Never Ever Give Up
Erik Rees, Jenna Glatzer
eBook


Completed just two days before Louis Zamperini's death at age 97, Don't Give Up, Don't Give In shares a lifetime of wisdom, insight, and humor from one of America's most inspiring lives. Zamperini's story has touched millions through Laura Hillenbrand's biography Unbroken, soon to be a major motion picture directed by Angelina Jolie. Now, in his own words, Louis Zamperini reveals, with warmth and great charm, the essential values and lessons that sustained him throughout his remarkable journey.


He was a youthful troublemaker from California who turned his life around to become a 1936 Olympian and a world-class miler at the University of Southern California. Putting aside his superstar track career, Louis Zamperini volunteered for the army before Pearl Harbor and was thrust into the violent combat of World War II as a B-24 bombardier. While on a rescue mission, his plane went down in the middle of the Pacific Ocean, where he survived, against all odds, drifting two thousand miles in a small raft for forty-seven days. His struggle was only beginning: Zamperini was captured by the Japanese and, for more than two years, he courageously endured torture and psychological abuse in a series of prisoner-of-war camps. He returned home to face more dark hours, but in 1949 Zamperini's life was transformed by a spiritual rebirth that would guide him through the next sixty-five years of his long and happy life.


Cowritten with longtime collaborator David Rensin, Louis Zamperini's Don't Give Up, Don't Give In is an extraordinary last testament that captures the wisdom of a life lived to the fullest.


A son of Italian immigrants, Louis Zamperini (1917-2014) was a U.S. Olympic runner, World War II bombardier, and POW survivor. After the war, he returned to the United States to found the Victory Boys Camp for at-risk youth and became an inspirational speaker. Zamperini's story was told in his 2003 autobiography Devil at My Heels, as well as in Laura Hillenbrand's 2010 biography Unbroken.


David Rensin worked closely with Louis Zamperini for many years and cowrote Devil at My Heels, as well as fifteen other books, including five New York Times bestsellers.

Louis Zamperini is the subject of Lauren Hillenbrand's critically acclaimed biographyUnbroken, the research for which was conducted over the course of more than 75 phone calls between Zamperini and the author, resulting in hundreds of hours of interviews. Zamperini is a regular lecturer, appearing before student groups, veterans, troubled youth, sports clubs, senior citizens, and religious organizations. Zamperini, now 93, lives in Hollywood, and only recently gave up skateboarding.