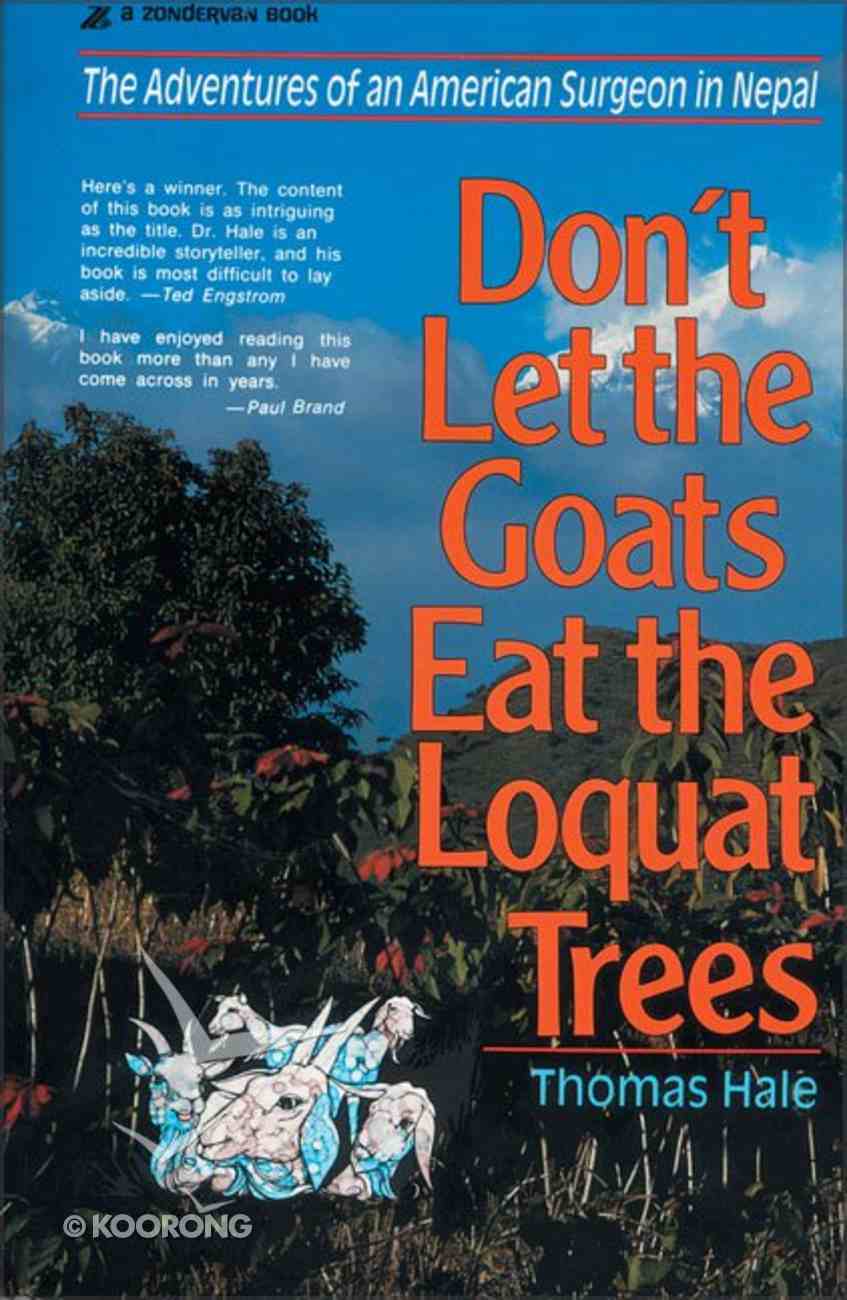 NOV94 - LLThomas Hale Dr Hale is an incredible storyteller, and his book is most difficult to lay aside.It makes the amazing and almost unbelievable experiences of a medical doctor in a mysterious land come alive.Be prepared for an utterly...

The Axe and the Tree
Stephen Griffiths
Paperback

Upon This Rock: The Sacrifices of a Japanese Nurse For a Young Church
Eric Gosden
Paperback

The Scripture of Their Lives
Jane Butterfield Presler (Ed)
Paperback

NOV94 - LLThomas Hale Dr Hale is an incredible storyteller, and his book is most difficult to lay aside.It makes the amazing and almost unbelievable experiences of a medical doctor in a mysterious land come alive.Be prepared for an utterly delightful account of serving God in the enchanting and closed mountain country of Nepal.-Ted Engstrom,President,WorldVision.

Thomas Hale writes about being a missionary surgeon in the same delightful way James Herriot writes about being a country veterinarian. Dr. Hale's incredible experience in tiny, mountainous Nepal are surpassed only by his talent for telling about them. Imagine, for example, the culture shock of moving to a Hindu country under such rigid religious control that it is not only illegal to proselytize, but illegal to change religions as well. Imagine further the shock of moving to that country as a missionary doctor. Thomas Hale and his wife, Cynthia, also a physician, too on that awesome challenge in 1970.God wasted no time teaching tom the peculiarities of his new culture. But His unusual method left Tom wondering what God was up to. Here is how Tom tells about it: "These were not the phlegmatic, easy-going Nepalis described in books and orientation courses. Those who spoke gesticulated fiercely. Some looked around menacingly; others spat. One thing was certain, however: in the cause of
-Publisher

In 1970, Thomas Hale and his wife, Cynthia, went to Nepal to work for their first twelve years at a rural mission hospital in the village of Amp Pipal. Subsequently they moved to Kathmandu, Nepal's capital city, where they have continued their work with the mission. Recently Cynthia took a position as an associate professor at Nepal's only medical school, and Tom has written a one-volume commentary on the New Testament, first in Nepali and subsequently in English for translation into other languages.

chapter one Scrap Metal A few months before I completed my duty as an army surgeon, Cynthia and I began the hectic business of outfitting ourselves for Nepal: sleeping bags, kerosene heaters, step-down transformers, kitchenware, tools, refrigerator, washing machine, typewriter, a five-year supply of clothes in increasing sizes for two growing boys (ages one and four), five years of Christmas presents---everything, it seemed, but a toilet seat. (Cynthia's mother would bring that the following year.) Nothing was available in Kathmandu we were told, and if it wasn't available there, we reasoned that it certainly wouldn't be available anywhere else in Nepal. We packed everything in large drums. For padding we crammed rolls of toilet paper (which supposedly wasn't available in Kathmandu either) into the empty spaces, two huge cartons of it purchased at bargain rates from the army PX. I can still recall the wide-eyed girl at the PX checkout counter staring at our pile of goods, then at us, then back to the pile. Why did we need eight different sizes of children's shoes, all at one time? And enough toilet paper to last a company of men six months? What were we going to do with the stuff---go into the retail business? There were regulations about that sort of thing. We explained that we were going to a very remote area where these items weren't available, and she told us there was no place so remote that it wouldn't have a PX. We said we weren't going to be with the army, which only confirmed her suspicions that we were into something illegal---or that we at least were abusing the system. Finally we were rescued by a senior clerk who had read in the bulletin of the base chapel about our going to Nepal. 'No problem,' he said cheerily, helping us carry our purchases outside. The toilet paper cartons were too big to fit inside our Volkswagen station wagon, so we had to tear them open in the parking lot and throw the rolls in one by one. We got everything home in just two trips. Two months before our scheduled departure for Asia, a letter came from the United Mission to Nepal saying we had been assigned to a small fifteen-bed hospital located out in the hills, a day's journey from Kathmandu. The hospital was still under construction. There wasn't even a road to it. We would have to fly to a grass landing strip and then hike six miles up a mountain. Cynthia was stunned. This was more than she had bargained for. Since we were both highly trained, certified specialists---Cynthia in pediatrics and I in general surgery---we had assumed we would be assigned to the big 125-bed mission hospital in Kathmandu. It was the second largest hospital in the country, located in a large palace once used by Nepal's ruling family. There we reasoned we would be able to put to use a good part of our training. But what were we going to do in a tiny, ill-equipped rural outpost? The letter put an end to Cynthia's long-cherished visions of missionary life in Kathmandu: the open and tastefully furnished home; the opportunity to entertain educated and influential Nepalis---perhaps even royalty; the piano concerts; an elegant but not extravagant wardrobe; the chance to use her silver service (a wedding present as yet unused, saved especially for Kathmandu). After all, the upper classes needed God as much as the poor. But suddenly all those visions were swept away and replaced by a crude mud-walled house, where our neighbors would be illiterate and unkempt hill people. Cynthia made her biggest adjustment to life in Nepal right then and there. For me, on the other hand, the challenge of a pioneer situation and the chance to rough it held great appeal. But it created another problem: What was I going to do for surgical instruments? A surgeon is helpless without instruments, and I didn't own even a pair of forceps. Under normal circumstances, hospitals provide whatever equipment a surgeon needs, but certainly this tiny rural hospital wasn't going to provide any. I had spent the past twelve years learning to be a surgeon, and here I was being put in a place where I would be unable to do what I'd been trained for. I saw myself spending the rest of my professional career treating runny noses, colicky babies, worms, and the itch---all cases that paramedicals were perfectly competent to handle. Twelve years of training and experience down the drain. And so Cynthia and I found ourselves chafing at what we later would recognize was our first lesson in missionary life: Be prepared for a comedown. Being asked to do something other than we were trained for was not what bothered us so much; it was being asked to do less. We learned what every missionary must sooner or later learn: If it's job satisfaction you expect, forget about being a missionary.